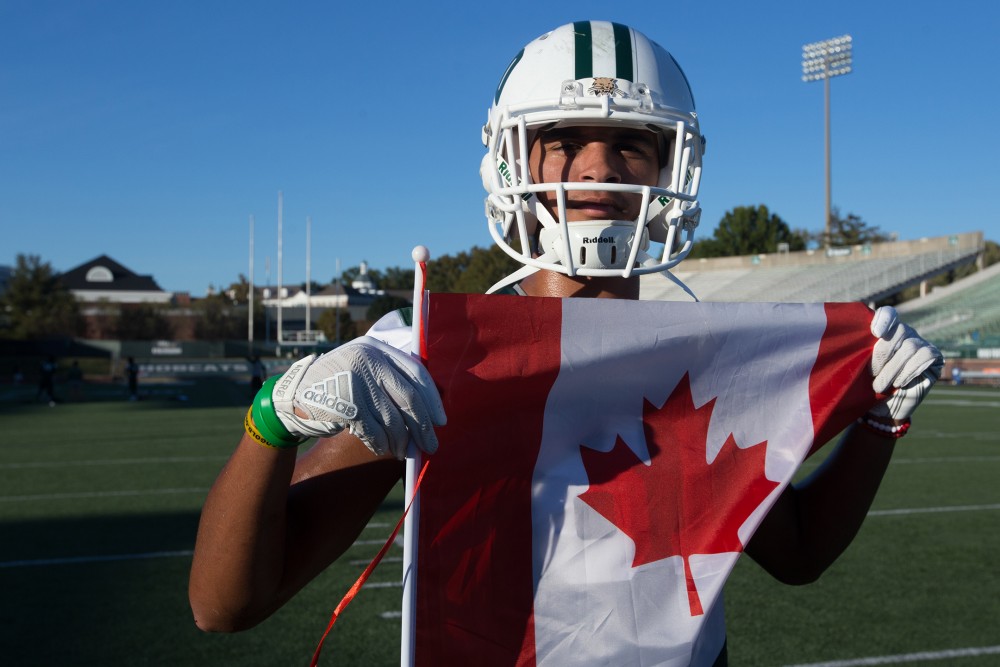 Matt Seymour, number 81 for the Ohio University Bobcats, poses for a portrait with the Canadian flag in Peden Stadium in Athens, Ohio.


Ohio receiver Matt Seymour smiled as he thought back on the past two years.

He smiled at what it took for him to come to Ohio, where on a warm September day he stood 2,600 miles from home on the Peden Stadium turf.

At the sound of the word “paperwork,” his eyes bulged. Somehow, his smile grew.

“Paperwork-wise, it’s crazy,” Seymour said. “I have a whole pamphlet in my room right now of stuff I gotta (have) just to get across the border.”

Seymour, from New Westminster, British Columbia, made the uncommon journey directly from Canada to the Football Bowl Subdivision (FBS), without stopping at a U.S. prep school or junior college in between.

In 2015, Seymour was one of two FBS recruits from New Westminster Secondary School, the only high school in Canada to place more than one player in the highest level of NCAA football.

As is the case with most of Canada’s top talent, he was under-recruited and had to fight through a lack of exposure and lack of respect for his competition to try to land somewhere stateside. Seymour’s talent, blended with the help of a well-connected coach and unwavering parental support, brought him to the Bobcats.

“I kind of knew that if I wanted to make it serious, then I had to start going down to the states and having to show myself to them,” he said. “They’re not necessarily gonna come up to us in Canada, so we gotta come down to them and get the exposure you want that way.”

Seymour’s childhood featured an array of activities, from baseball and basketball to swimming and gymnastics. Football wasn’t on his radar until ninth grade, when a friend suggested he try out for the school team. Seymour was hooked in a matter of weeks.

He beat out that same friend for a starting spot in the receiving corps and eventually excelled on both sides of the ball as a speedy, lanky wideout and a ball-hawking defensive back.

Seymour played the game hard and at full speed. During his freshman year, he went up for an interception and, as he brought the ball in, was slammed to the turf by an opposing player. Seymour got up, started coughing blood and spent four days in the hospital with bruised lungs.

“My parents almost made me quit after that,” he said, laughing. “Because they didn’t know how dangerous football was. But they let me come back.”

It wasn’t long before some of Canada’s top university programs noticed him. Seymour wound up visiting Ontario powerhouses McMaster, Carleton and Guelph, as well as the University of British Columbia, which won the 2015 national championship.

But his goal was to play Division I football in the U.S.

“I’m not a big believer in luck.”David Seymour, Matt's father and a pastor at Royal City Community Church in New Westminster

Fortunately, Seymour’s high school coach, Farhan Lalji, understood what Canadian players needed to do to give themselves a shot at playing south of the border.

“I think exposure’s an issue because these areas aren’t necessarily recruited on a day-to-day basis,” said Lalji, who’s coached high school football in British Columbia for 30 years. “But it’s less that now. I think the biggest challenge that Canadian kids get is you’re being compared to the people that you’re playing against.”

Seymour went to a few camps, including one five hours away in Beaverton, Oregon and one six hours away in Eastern Washington University in Cheney, Washington. Camps cost athletes hundreds of dollars in entry fees without assurance they’ll get a fair look from coaches in attendance.

“Well, you do as much as you can because he’s got the dream,” said Matt’s father, David Seymour.

To give his son another chance to be seen, David recalled traveling down to Spokane, Washington, for a prospect camp that doubled as a family vacation.

But Seymour’s big break came through Lalji, who knew James Ward, Ohio’s defensive back coach at the time, since Ward had recruited one of Lalji’s players to Idaho State years before.

Lalji sent Seymour’s highlight tape to Ward. Then, on the day of the 2015 College Football Playoff National Championship, which Lalji covered for TSN, Ward called Lalji to say Ohio was interested in Seymour.

Two weeks later, after a visit to campus, Seymour committed to his sole FBS offer.

“I’m not a big believer in luck,” said David, a pastor at Royal City Community Church in New Westminster. “But sometimes there are just opportunities that are made available just through a series of events that happen and you make the most of an opportunity that’s presented to you.”

Without Lalji, Matt may have never had his chance. One of the problems for most promising Canadian players is that they don’t have a coach with the resources or the drive to help. After all, most high school football coaches in Canada serve on a volunteer basis.

“[If] you’re in one of those power programs at a big state, schools are calling you,” Lalji said. “But if you’re a Canadian coach, you need to be making calls to coaches.”

Seymour stayed home in the fall of 2015, working part-time at a grocery store and lifting weights frequently with a personal trainer at a gym two blocks from his house. He began classes the following January as a “grayshirt,” then redshirted last year. He’s played in two games this season as a redshirt freshman.

The journey to the FBS is complete, but it’s taken Seymour far from home. He said he goes home just twice per year for about three weeks total. FaceTime and texting are his daily ways of keeping in touch with family.

Trips to Athens are few and far between for the Seymours. Not having the TV channels or streaming access to Ohio’s games is a challenge, too.

Sometimes, on the night before the Bobcats play, they call Buffalo Wild Wings in Bellingham, Washington, to see if the restaurant can show the game. When Ohio faced Purdue, the Seymours drove an hour down to Bellingham to watch.

“You make the sacrifices because there’s the goal that we have there,” he said. “And you try to do as much as you can as a parent to help make that thing a reality.”

The forecast for Canadians taking a direct route to the FBS shows no sign of improvement. Among Canada’s 2017 top 10 high school seniors according to Canada Football Chat, only one has committed to an FBS school. And four of the top five players are playing at prep schools in the U.S.

Matt beat the odds. It’s not something he takes lightly. And he shouldn’t, given that he represents a group that will always be under-recruited.

“I know a lot of guys back home that probably deserved shots down here,” he said. “I’m thankful of the opportunity I got, so I just gotta make the most of it.”