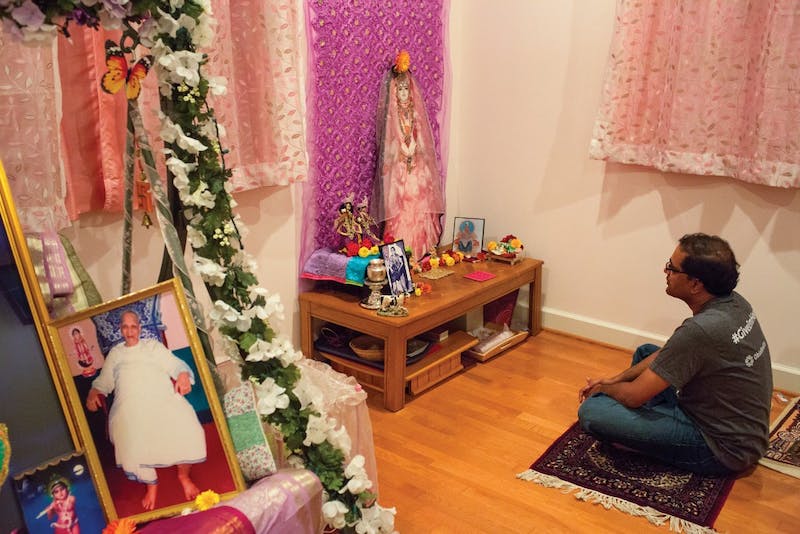 Worshipping from where you are

Hindu students worship without a house of prayer

Buddhists, Muslims, Jewish students and those practicing many other ideologies have a building to worship in Athens.

One spiritual tradition not represented in Athens is Hinduism.

Without a temple, students like Chinky Dhingra who are Hindu can practice their beliefs outside a formal institution.

“For me, I have a collage that has all the pictures of all the gods,” Dhingra, a graduate student studying computer science, said. “I framed it out and keep it in my home.”

Hinduism is not represented in a community center or place of worship in Athens, but some Hindu students do not think a local temple is necessary because of alternative ways of worship. 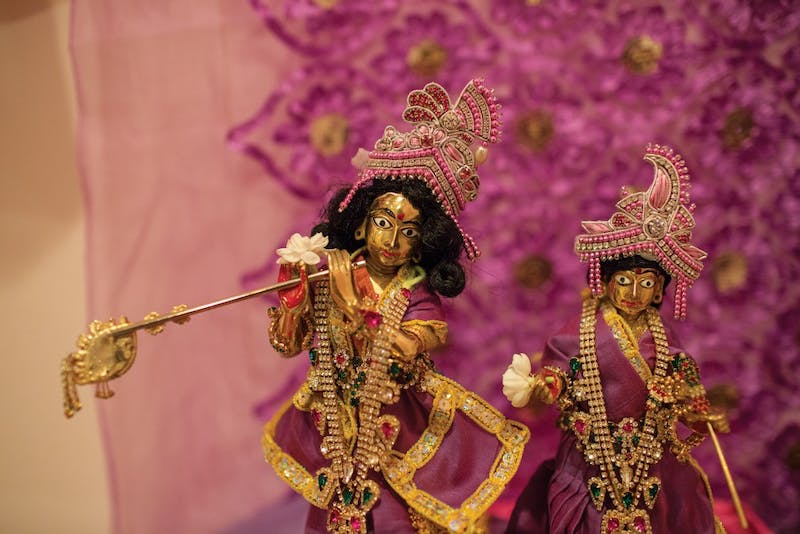 Hindu gods Krishna, left, and Radha, right, are displayed in Umamahesh Yellamraju's shrine. They are a symbol for spiritual love.

Hinduism is a set of traditions followed by people in India and Nepal and people of Indian descent throughout the world, according to BBC.

Many different sects of Hinduism exist, however, and it is difficult to find beliefs that all Hindus share, Brian Collins, the Drs. Ram and Sushila Gawande chair in Indian religion and philosophy, said.

Saivism: worship the Supreme God as Siva — the compassionate one

Swati Roy, a sophomore studying international business, said Hinduism differs from person to person based on individual beliefs, and people pray by themselves whenever they need to.

“It’s a personal opinion,” Prashant Kumar Kuntala, the president of Indian Students Association, said. “You’re a Hindu, but it’s up to you how much you want to spend praying. It’s a personal choice.”

Roy said some Hindus do not believe there is a specific god or way of worship.

“Some just believe that religion is just a way of life,” Roy said. “You just do good deeds, and good deeds come back to you. You just pray to a divine energy. It doesn’t have to be a specific god or a specific idol that you worship.”

Roy’s beliefs are different from her parents, which she said is common among many younger people who are Hindu.

“I don’t know which Hindus are really religious,” Roy, who is from Dhaka, Bangladesh, said. “Because every time I meet someone, if they’re from this generation, it’s very hard to find someone who’s really religious.” 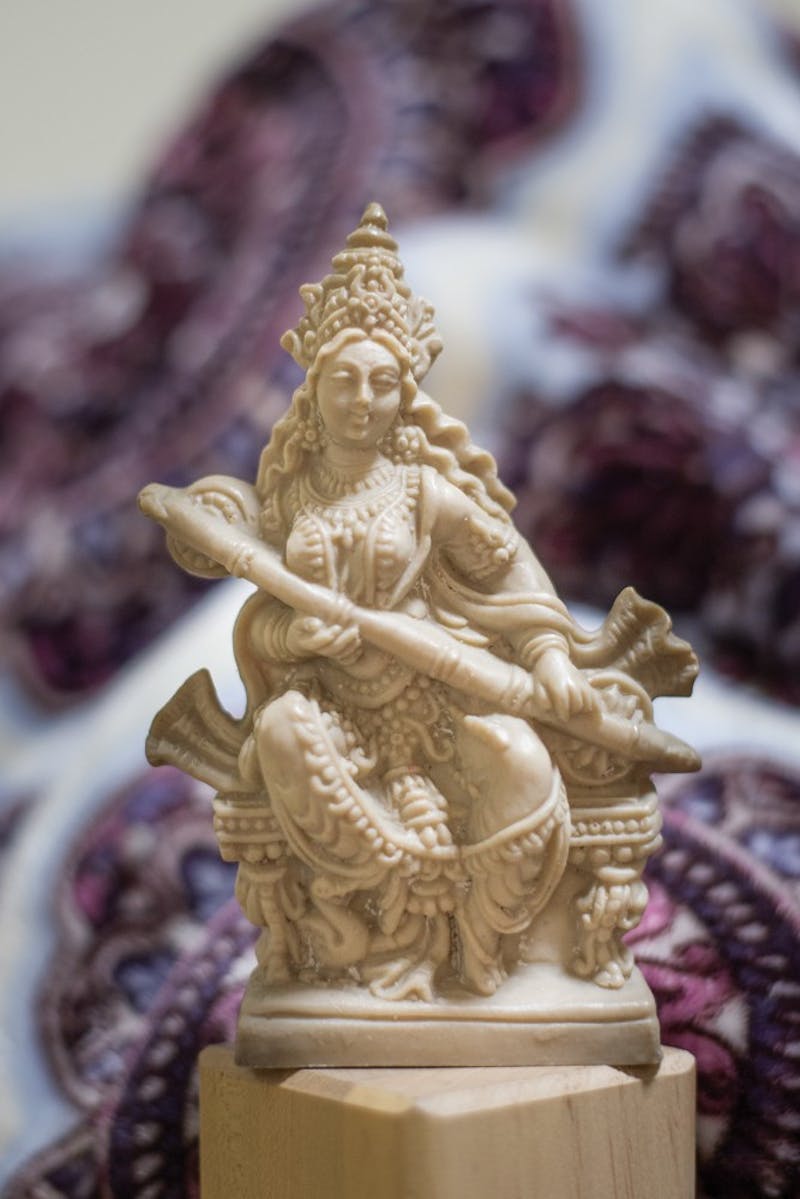 A figurine depicts Saraswati Ma, the Indian goddess of knowledge and literature.

The newer generation of Hindus does not have as many mandatory customs to pray every day as previous generations did, Roy said, which is why younger Hindus may not practice and go to temple as much as their parents do.

Roy said she knows many Hindus who worship or pray because their parents want them to, even if they are not personally spiritual.

Roy said she does not like labels but would consider herself more of an agnostic atheist, although her parents are still very religious.

Having no place of worship in Athens, Hindus have found alternate ways to worship.

“Hindu students are in and out, and the settled community here has not grown to the place where they’re investing in (a Hindu place of worship),” Collins said.

In Ohio, 12 Hindu temples have been established; the nearest ones to Athens are in the Columbus area.

“(In Southern India), it’s very common to have two to three temples within four or five streets apart,” Kuntala, a graduate student studying computer science who is from Hyderabad, India, said.

Dhingra said her mother would want her to go to temple at least once a week, but members of the younger generation typically just go to temple on festivals, ceremonies or their birthdays.

“It’s just being with the family and the people in the festivals and the ceremonies,” Roy said. “It’s just, the aspect of being together and celebrating something. (The festivals are about) spreading more love and inclusion and spirituality.”

This year, the Indian Students Association will celebrate Diwali on Nov. 6. The celebration serves to get rid of Hindus’ sorrows, Roy said.

“As long as you’re honest to yourself and do the right thing, that’s what really matters." Chinky Dhingra, a graduate student studying computer science

Holi, in honor of spring, happens in Spring Semester and is celebrated with two different events, Kuntala said. One will be solely for throwing colors, and the other will be a formal dinner.

In addition to celebrating festivals on campus, Hindu students have found other ways to worship without a temple in Athens.

Collins said having a temple or Hindu community center would be helpful for both Hindu students and people who are curious about the traditions.

Vaishnavism: worship the Supreme God as Lord Vishnu and his incarnations, especially Krishna and Rama

“For (Hindu students), it would make it easier for them to stay in touch with their traditions,” Collins said. “For everybody else, it provides a place for you to learn about Hinduism.”

However, Nitin Luthra, a first-year graduate student studying English, said Hindu students would be missing the cultural aspect of going to temple.

“What they (are) missing is the social experience (and) celebrating the festivals,” Luthra said.

Luthra does not think a temple is necessary, however, because international students should interact with people outside of their culture. 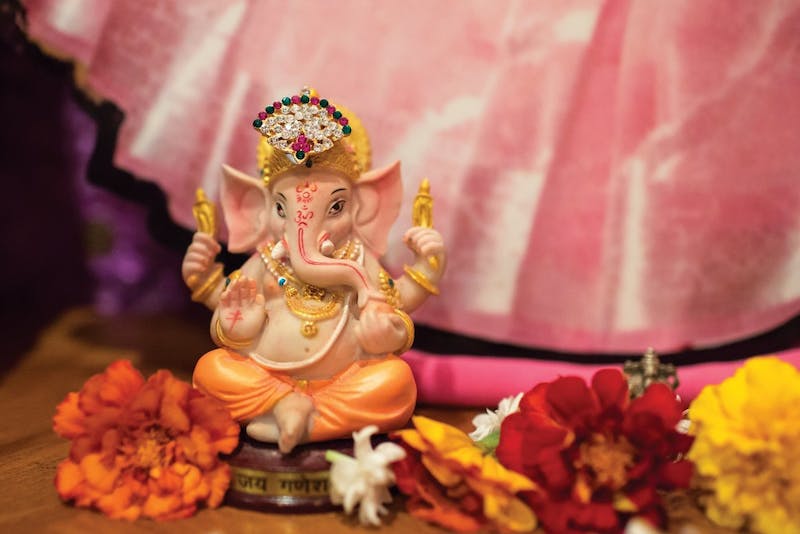 Lord Ganesha, one of the most well-known Hindu gods, sits on display in the room which holds Umamahesh Yellamraju's shrine in his home in Athens.

“If you just have your own temple and your own group from your own country and religion … then you’re not actually making really good use of this wonderful opportunity that for many people, is an opportunity of a lifetime,” Luthra said.

In Hinduism, there are thousands of Hindu gods and idols — small statues or photos that depict gods — are a way for Hindus to worship in physical form, Collins said.

Roy said small idols that Hindus can carry are reminders that a god is with them. 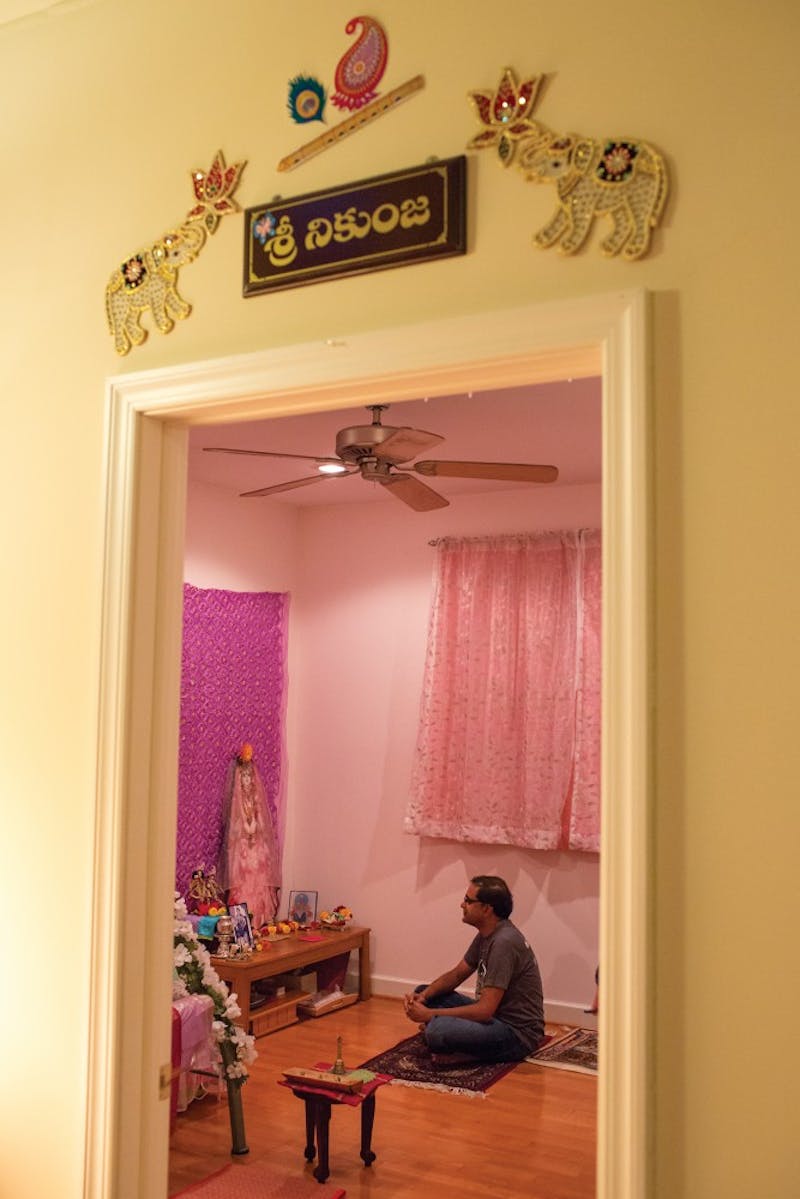 Umamahesh Yellamraju, of Hyderabad, India, sits in front of his shrine in his home in Athens. The house was built around the shrine so that it faces northeast and has no upper room above it.

Roy’s mother gave her a small idol of the goddess of knowledge, Saraswati Ma.

“So it’s just a portrayal of strength and divinity and spirituality all into one,” Roy said. “And when you turn to that idol, it just makes you feel more safe (and) more stable in your life.”

Umamahesh Yellamraju, an internal medicine physician from Hyderabad, India, and his family built their own temple in the northeast corner of their home in Athens.

Yellamraju’s temple smells of jasmine, and the god Radha Krishna is displayed prominently in the middle of the room. Pink curtains flow down the wall next to pictures of other Hindu gods.

He and his family use the temple everyday and pray inside it before every meal. Still, Yellamraju said there would be benefits to having a temple in Athens.

“It would be nice to have (a formal temple in Athens) for my kids’ sake,” Yellamraju said. “There’s only so much we can explain to them about (Hinduism) unless they feel it and see it.”

Dhingra said one major Hindu belief is karma, the idea that if someone does a good deed, then good deeds will happen to them.

“We don’t have to go to temple to be religious, we just believe, like any normal good person, we should do good and good things will happen to us,” Dhingra said.