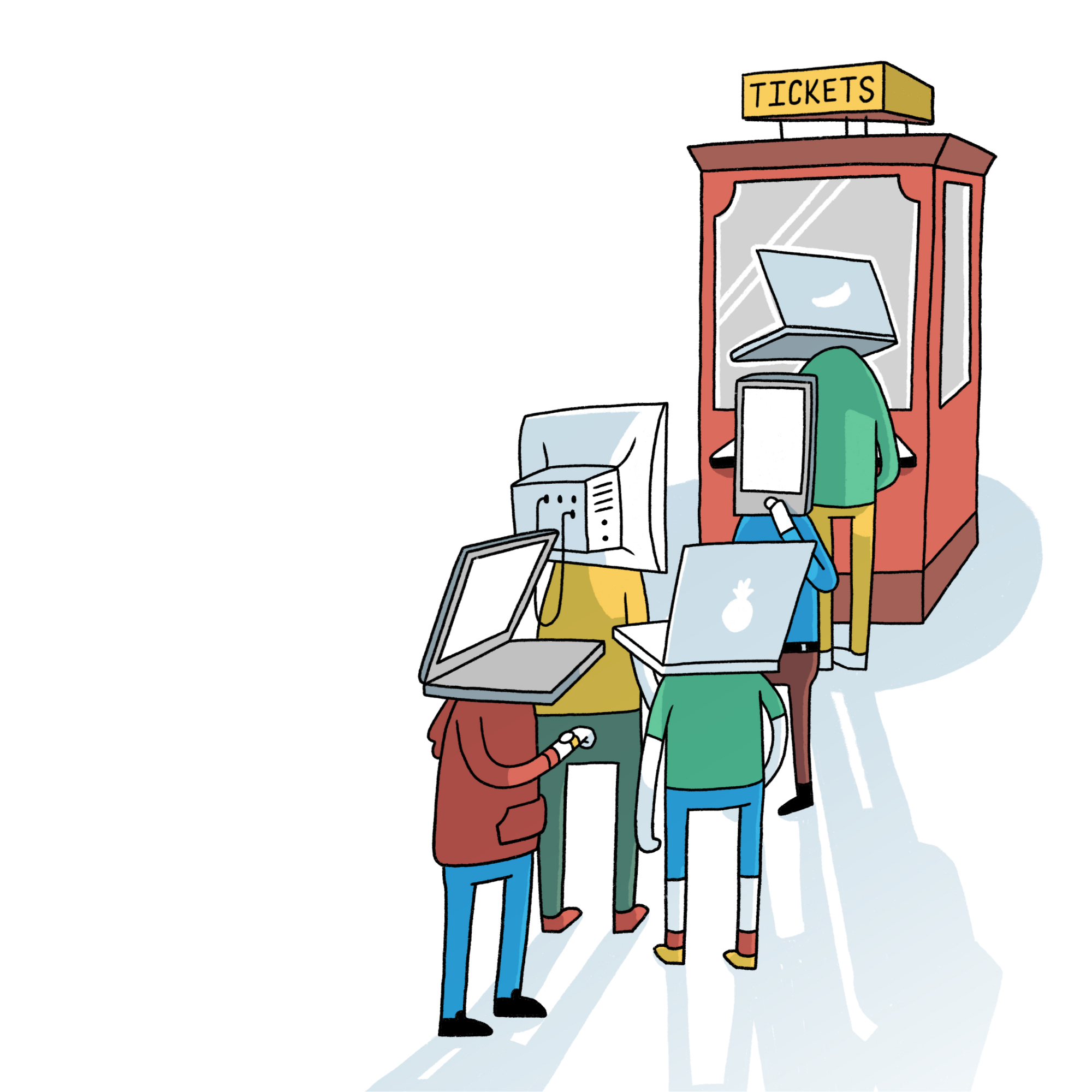 The effects of a pandemic on film, from Hollywood to Athens

T he coronavirus pandemic has jolted the lives of many. There have been countless deaths, widespread devastation and the need to adapt to a brand new way of life. But throughout quarantine, one way many took comfort in the madness was by watching films.

The film industry as a whole, however — including film students, festivals and production staffs as well as the actual films and their premieres — have undergone drastic changes since the start of COVID-19.

“It's a collaborative art form, which collaboration means that you need to meet,” Keisha Martin, an Ohio University third-year MFA film student, said. “You need to gather together to achieve a goal, so it's not a solo art form. I think it's a new challenge, but it doesn't mean that it's impossible to make films.”

To understand why those in the industry aren’t losing hope amid these changes, it’s important to comprehend what has changed and how the industry will persevere.

In a general sense, filmmaking took almost a halt. Deadline reported numerous films that were forced to cease production operations, including Disney’s Avatar sequels and The Little Mermaid live-action as well as Netflix’s The Prom, Sony’s Cinderella and Warner Brothers’ The Batman.

“Production companies are designing models to facilitate ‘safe’ movie making practices so that they can continue to produce their content,” Rafal Sokolowski, an associate professor of film at OU, said in an email. “For the time being, it’s easier for the small, Indy productions, that can get through under the radar of financiers and insurance companies, or huge budget productions, that can afford the safety protocol. That’s on the production level.”

Though it seems with a lack of production that budgets for various independent films and parent companies would lower, Sokolowski believes budgets will do the exact opposite. With safety measures on set, unpredictable delays, production stoppage and insurance claims, he feels budgets for production will skyrocket.

In fact, Lindsey Martin, an assistant professor of film at OU, is already seeing new job opportunities for people in the film industry due to the pandemic. COVID-19 safety production protocols from organizations like the Screen Actors Guild and Directors Guild of America have been put in place, detailing rules to minimize the risk of transmission while working with the unique environments of film and television production.

“I believe it’s a strong and versatile field and industry – that’s what filmmaking is: rolling with the punches.”-Rafal Sokolowski

Some of the protocols include quarantining the entire cast and crew in various pods and bubbles as well as a health and safety supervisor, or HSS, which is a new role on set. The HSS is in charge of developing safety plans for productions, administering them and reporting if people are not following the plan. These supervisors are not only being implemented at the professional level, but they’re being hired at a student level as well.

Though this is a win in the safety department, it will significantly increase expenses for filmmaking. In a report from the Los Angeles Times, it’s estimated that coronavirus prevention steps could add more than $1 million to a typical film budget. On top of the additional cost, the effort to minimize people on set could stretch the average eight-week shooting schedule to as many as 10 weeks. The cost for one day of shooting can be as much as $400,000, and two extra weeks could tack on expenses of $5 million or higher.

Lindsey Martin feels that because of the lack of a traditional model of filmmaking, complete with giant, expensive sets and flashy visual effects –– think Marvel –– writers will focus more on the story: designing characters, forming their relationships and world building.

“I think in the next year, we’re going to see a lot of not just film, but media that’s coming out that feels much more intimate in scale,” Lindsey Martin said.

In light of all the changes, Sokolowski and Lindsey Martin feel some practices that have been around for a long time will be reevaluated and hopefully changed for the better.

“I believe it’s a strong and versatile field and industry – that’s what filmmaking is: rolling with the punches,” Sokolowski said in an email.

But without avid students and film festival goers, there are no individuals in the industry to create or implement these new methods in the first place. This is why students like Keisha Martin have not stopped working hard during the pandemic.

“I was lucky enough to finish principal photography, which is all the filming for my second-year film, which is a short narrative piece that is now 17 minutes,” Keisha Martin said. “I worked on editing that pretty much all quarantine.”

She is now working on her thesis project, beginning to write the script and do visual preparations like brainstorming the costume design, researching different locations and thinking about character designs.

Other students, like John Amato, a senior studying integrated media at OU, have finalized their projects. Amato spent all of quarantine working with his peers through text and email to put the finishing touches on the film 456 Days, which he wrote and directed. The film was released through Rough Cut Collective, a film organization on OU’s campus.

While working to put the film together, Amato felt the drastic change in production from the pandemic. He, as well as other students, like Harlan Friedman-Romell, a sophomore studying integrated media at OU, have noticed a difficulty in coordinating shoots with film clubs and working with peers to finalize projects.

Friedman-Romell is also part of Rough Cut Collective and another film organization called AVW. The groups have been holding their meetings through Zoom to try and keep students’ filmmaking spirits alive.

“It’s really great to see everyone again and to be in that creative mindset, but it’s really tough knowing that we’re not going to be able to really make anything with other people safely,” Friedman-Romell said.

Friedman-Romell is finishing up a film that he made through Rough Cut Collective last year and is planning to release it in late October and send it through the festival circuit, applying to festivals like the Athens Film Festival.

Apart from encouraging her students, Lindsey Martin has also been working on a film that she initially wanted to send to the 2020 film festival circuit. She decided to hold off because of the fear that, with the new online format, she’d miss the full experience of entering a film: meeting people, making contacts, networking and forming connections with other filmmakers, which is something she feels just can’t happen virtually.

“There are good things that come, I think, from film festivals being online,” Lindsey Martin said. “For instance, if I can’t travel to the place, I can still see the work. But I do think making those connections and meeting the people and collaborations aren’t going to happen as organically.”

For the filmmakers who did premiere films in the 2020 season, to better care for the safety of others, the premieres were moved to an online format, like Charlie Kaufman’s I’m Thinking Of Ending Things or Antonio Campos’ The Devil All The Time.

This took a toll on revenue for the film industry. Michael Pachter, a Wedbush Securities analyst, estimates the 2020 box office will be down nearly 50% from last year, ending with $6 billion in ticket sales.

“We're so accustomed to thinking that there's such a high barrier of entry for really good filmmaking, but everybody's got a really nice camera on their phone and when it comes down to it ... I think the only thing that's discouraging people from really being creative and getting into filmmaking is their own personal problems. There's so many avenues to make really cool stuff, and it's never been easier than it is now.”-Harlan Friedman-Romell

The alternative method of premiering films certainly has an allure –– safety reasons aside, there’s the idea that viewers don’t have to leave the comfort of their own homes to get stellar entertainment –– but the OU film professors and students agree there are certain films that are just meant to be on the big screen.

Keisha Martin equates it to watching a comedy alone. Something in the film may be funny, but normally, people wouldn’t laugh unless prompted by the surrounding energy of fellow movie-goers. She feels it’s not performative — just a heightened emotion.

“The movie experience in general is already very interesting,” Keisha Martin said. “We sit in a dark room with strangers and experience art, but we have different experiences, even though we're looking at the same thing. Film impacts on different levels to everybody. Even if we're all at this exact same place, we're still going to walk out after watching a movie and have different interpretations and feelings of that movie."

For now, however, the OU film crew is OK with virtual premieres to better ensure the safety of audiences.

All of those drastic changes don’t change the fundamental purpose of the film industry: to entertain. In fact, Friedman-Romell believes more people should be working to create films for the industry with the additional free time.

“We're so accustomed to thinking that there's such a high barrier of entry for really good filmmaking, but everybody's got a really nice camera on their phone,” Friedman-Romell said. “And when it comes down to it ... I think the only thing that's discouraging people from really being creative and getting into filmmaking is their own personal problems. There's so many avenues to make really cool stuff, and it's never been easier than it is now.”

Lindsey Martin wholeheartedly agrees with Friedman-Romell that if there’s a will, there’s a way, and that will cannot be stopped by anything –– even a pandemic.

“It absolutely has not discouraged filmmakers,” Lindsey Martin said. “I will say that there’s been a lot of lows in terms of ‘OK, now what do we do?’ But I've been witnessing, even with our own students, that they will not be stopped. And I think that that's the way the film industry is: you can't stop it. Art needs to be made –– we'll just figure out new ways to do it.”