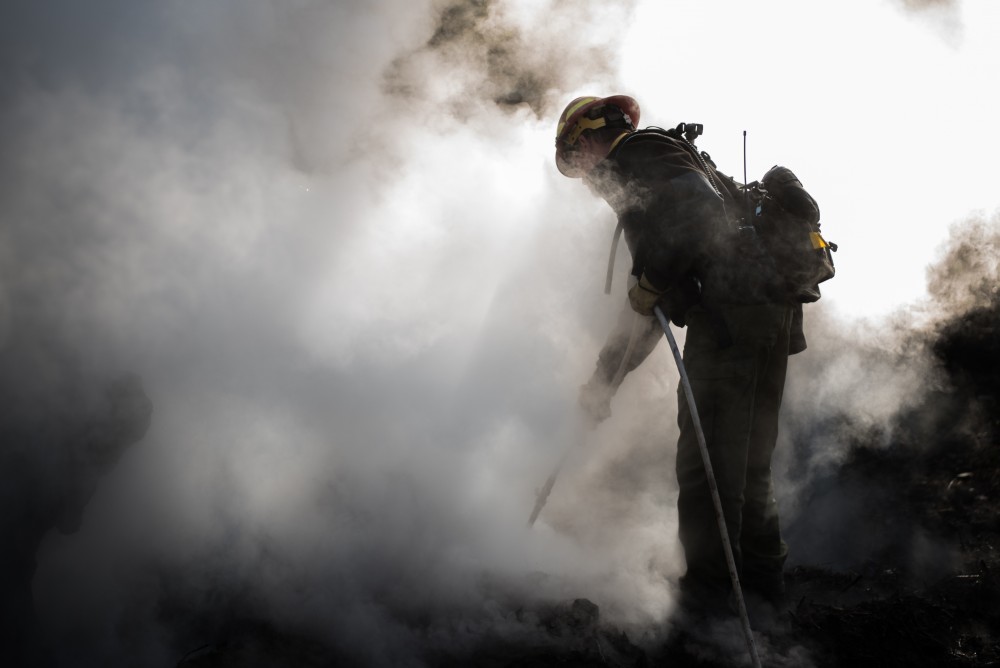 Smoke curled around Jeremy Waite. To his left, a barrel was on fire. To his right, black ashes scattered the ground.

He, along with six others — four men and two women — are a part of the Wayne National Forest Engine 611 team. On a chilly fall morning, they traveled to a Nelsonville private property Oct. 18. The fire was small and started the previous night but hadn’t been extinguished. After monitoring the fire through the night, the crew went to put out the fire again in the morning, so it could not grow into a larger hazard or spread into the Wayne National Forest, which is Ohio’s only National Forest.

This is his usual day.


He started working with fires 12 years ago, but now he is the assistant captain for Engine 611.

Engine 611, a well-traveled, mint-green fire truck that holds a capacity of 300 gallons of water, has driven more than 20,000 miles between Ohio, Oregon, California and Arizona this year alone.

As soon as it returns to the Athens Ranger Station in Nelsonville, it will get refilled with gas and water. If there is a fire day or night, the firefighters are ready. During dry spells, they receive about two to three calls per day.

“We’ve had a couple weeks of dryness so things are burning a little better now,” Waite said. “We will get a lot of false alarms too where some neighbors burn the fire and call because they don’t know the rules. When we come in, we don’t just try to suppress it, but we try to educate at the same time.”

Waite said fires in Ohio are mainly set by people who burn trash and do not understand the dangers of open burning. Athens County deals with private property fires, and most of the time, the sheriff will not fine property owners unless the fire reaches Wayne National Forest.

“During fire season, we work whenever the phone rings,” Waite said.

The procedure for dealing with fires is to typically stir up the embers and brush using a fire axe. The firefighters then spray down the area and then stir everything up again. They stand up any logs or large items to make sure they have been doused with water. 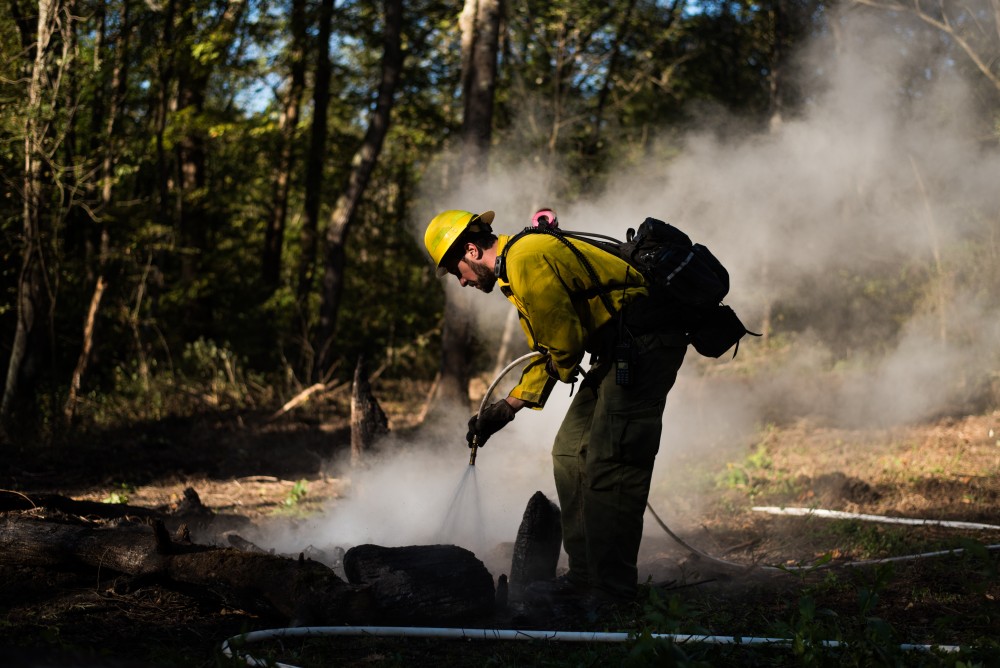 Jacob Kovolisky, senior firefighter on Wayne Engine 611, works on putting out a fire in Nelsonville on Thursday, October 18. The property owners were burning trash and left it unattended.

Clouds of steam rose throughout the air as the crew waited to see how the fire was doing. Sometimes they have to hose it down multiple times, Waite said.

The job of a wildland firefighter can also be dangerous. People often burn tree stumps, which can create hazards when the roots burn out and form an ash pit. He said it can give bad burns to anyone who steps in the pit.

At the fire, the firefighters reminded each other to not breathe in the smoke while they are putting it out.

“We just don’t know what they’re burning in their piles,” Waite said. “It could be all kinds of stuff.”

Other times, windstorms will knock down trees and power lines, so they must wait to make sure the lines are not on when they go to put out the fire.

“We’re not trained to deal with structure stuff, so we can only deal with the wildland part of it,” Waite said. “A lot of hazards that are associated with structure fires are different than wildlands. Hazards change from scene to scene.”

There is a burn ban for the state of Ohio during October, November, March, April and May during the hours of 6 a.m. to 6 p.m, according to Ohio Revised Code 1503.18. People are not allowed to burn waste outside during those hours and must be at the fire at all times in case it gets out of hand.

If a fire is unattended and violates the burn ban and if it is in the radius of the Wayne National Forest, such as the fire the crew attended on Oct. 18, it will be considered a hazard and be put out.

“If anything is within that protection zone or within a mile of it, we can respond to that because it’s a threat to the national forest,” Waite said.

Kevin Grodi, Engine 611 captain, said that when his engine or another needs assistance, he can pull in other federal agencies, state agencies or volunteer fire department firefighters. If another department needs assistance in another state, he and his crew will go there. 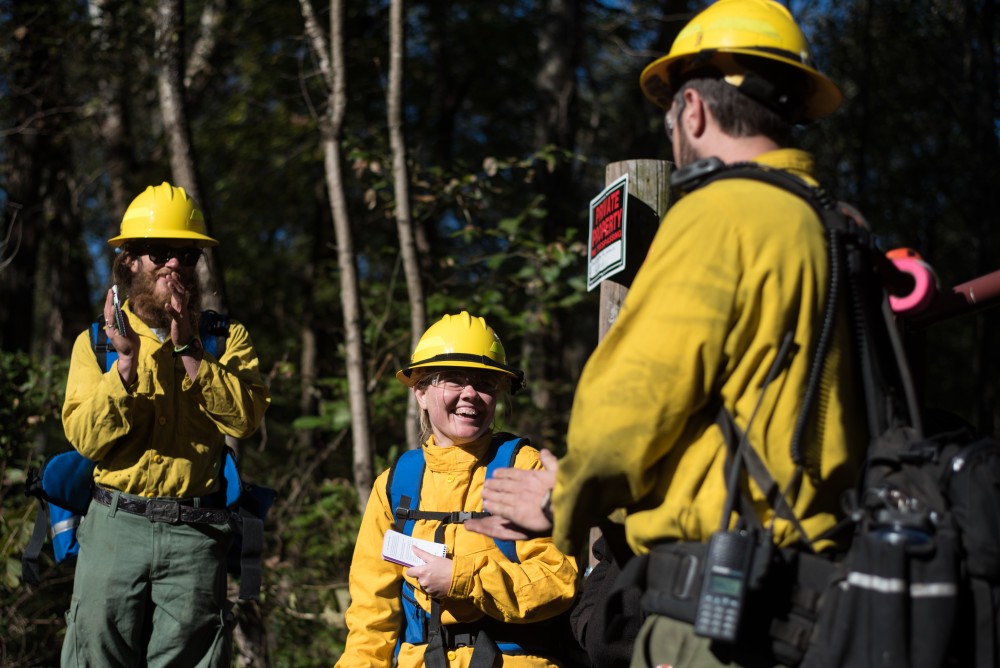 James Benson, left, and Jacob Kovolisky, right, congratulate Maryjane Heckel on her first fire that they put out in Nelsonville on Thursday, October 18. The property owners were burning trash and left it unattended.

“I like using the local resources first because they can get here, they know the ground, they know the territory,” Grodi said. “For the most part, they know everybody who lives here by name. We’re able to have that rapport with them and keep them in the loop.”

Jacob Kovolisky is the senior firefighter of the crew. He’s worked for about five years as a wildland firefighter but has worked on the Wayne National Forest crew for a year and a half.

He said that in the morning the crew will come to the Athens Ranger Station in Nelsonville and check the trucks. They will then brief on what to get done for the day and decide who will be in which trucks.

“The nice thing about this job is that as firefighters, we get an hour everyday to either run, get out and work out or train for our job,” Kovolisky said. “Then we come in and get situated and then go out into the field.”

The majority of the fires in Wayne National Forest are in the afternoon, Kovolisky said. People start lighting fires at about 4:30 p.m. when school or work is over.

“My favorite part about my job is (responding to fires),” Kovolisky said. “What other person can say that they get to go and work in the woods? Some people say that my job is better than your best vacation. I love doing it every day.”

Everyone on the team wears a backpack containing 4 quarts of water, lunch and safety gear, while they work. It also has a bag to camp overnight in case of long-term assignments.

“I’ve been to Alaska for wildfires. I’ve been to Oregon. I went to Puerto Rico last year for a hurricane assignment,” Kovolisky said. “You get to travel the entire U.S. Sometimes you go international. I’m not sitting in New York City typing away at a desk.”

Kovolisky said the concept of fire is changing, which makes his job challenging sometimes. In recent years, fires have become more violent, which has made the job of a firefighter harder to control the situation.

Maryjane Heckel, a resource assistant for Engine 611, responded to her first fire with the rest of the crew.

“One thing that you know before you start doing it is that it’s a really hard job,” Heckel said.

She said she had to walk 3 miles carrying 45 pounds in 45 minutes to get her certification.

“It is something that I trained up for for a month,” Heckel said. “A lot of people don’t pass on their first time.” 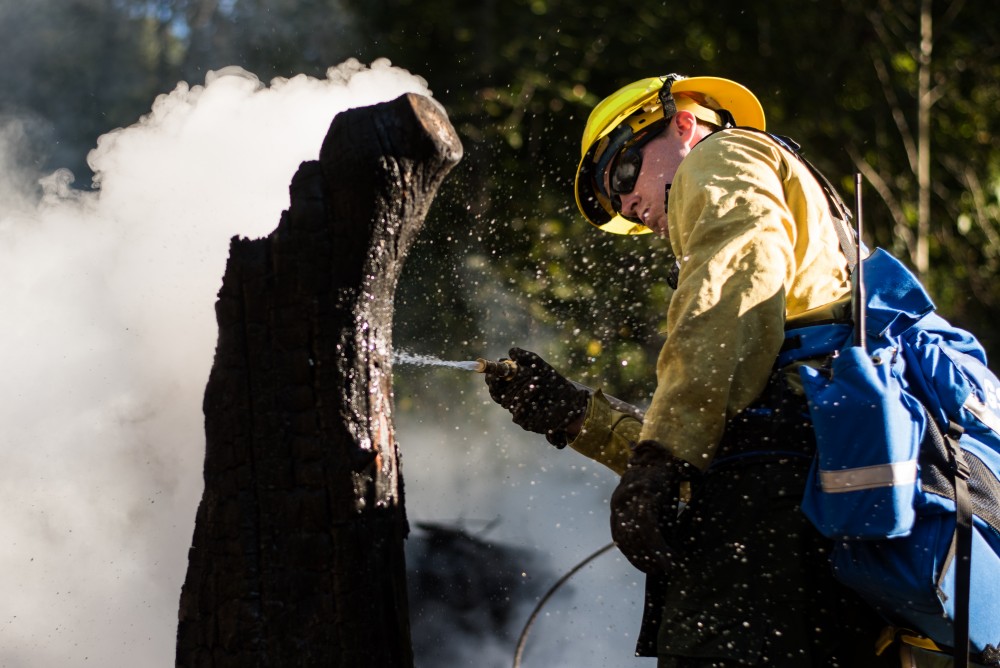 Matt Castells, forestry technician, sprays down a tree while putting out a fire in Nelsonville on Thursday, October 18. The property owners were burning trash and left it unattended.

James Benson commanded the fire the crew was putting out, instructing them where to hose and test if there was still heat. He’s an incident commander in training and has worked for six years as a wildland firefighter.

The fire was a spot fire, a fire that ignited from the embers of a larger fire and was probably 1/16 of an acre, Benson said. It took the crew about two hours to put it out.

“The National Forest surrounds all of this private land, so if it did get out of hand, it could burn what we don’t want to burn because we don’t have controls in place to keep it from going to the highway or someone's home,” Benson said.

A big part of the job is extinguishing fires, about 90 percent, Benson said, but the other part is doing prescribed burns. Prescribed burns are intentional fires that the fire department will set. They will create a box around a patch of land to keep the area contained, and then light it to burn off the underbrush. They burn oak or hickory trees because they are sturdy, can withstand heat and produce acorns and nuts for the ecosystem.

Prescribed burns work to prevent large wildfires. During these burns, they will bring in biologists to help with the ecosystem.

“We will go through and light it off, and it’s usually done in a day,” Benson said. “It is good for the forest and rejuvenates the soil and puts nutrients back.”

He said the department has about 5,000 acres it is planning to burn in the Wayne National Forest. There is one planned for the fall and a few for the spring.

“Fire is needed in almost all landscapes throughout the country, and we’ve been suppressing it for years and years,” Benson said. “The more you suppress fire, the more fuel that is there which makes fire danger a lot worse. Instead we need to embrace fire.”

“We don’t know all the answers to the forests, we just fight fires. You can ask me what this tree is and I ain’t going to have a clue. Is it on fire or not, that’s my answer.”Kevin Grodi

There is a scale for how large and dangerous a fire is, ranging from IC1, which is the largest and most dangerous, to IC5, a low-risk fire. If a fire is considered an IC5, like the small trash fire the crew put out on Oct. 18, Benson would be the one to command it.

Grodi said safety and putting out the fire is his main priority in his job.

“We’re not biologists, we’re firefighters,” Grodi said. “We don’t know all the answers to the forests, we just fight fires. You can ask me what this tree is and I ain’t going to have a clue. Is it on fire or not, that’s my answer.”