The interim dean for Ohio University’s College of Fine Arts went to school originally to become a doctor.

While initially majoring in biochemistry pre-med at Wellesley College, Elizabeth Sayrs was also taking oboe lessons and music courses. Then she realized her focus was shifting more to her musical aspirations.

She had to call her parents and break the news to them. Although she admits her mother probably would still want her to become a doctor or a lawyer, she can’t imagine her life without fine arts.

“It’s inextricably linked to who I am,” Sayrs said.

She now has a bachelor’s degree in music and a master’s degree and Ph.D. in music theory.

Fine arts was ranked economically as the third-worst major, according to a 2012 Forbes article titled “The 10 Worst College Majors.” Film, video and photography majors were ranked second. Sayrs, however, said not to pay attention to those lists.

“(Fine arts) majors tend to be happier overall and are more likely to be employed in an arts-related field,” Sayrs said.

And even if an artist doesn’t end up in the field, Andrew Barger, a second-year graduate student studying printmaking, said the skills can be transferred to other professions.

“I feel like now if you have some degree in the creative industry, you can still work for some of these high profile jobs, maybe not as a visual artist, but having that creative background,” Barger said. “Anyone that is making work is, I want to say, a problem solver, and a problem solver through visual language. That can be applied to many different things.”

At OU, there are more than 700 undergraduate and 240 graduate or professional fine arts majors split between six different programs of study, according to the Office of Institutional Research 2015-16 data. There are four schools: School of Art + Design, School of Interdisciplinary Arts, School of Music and the School of Dance, Film and Theater.

Fine arts classes are not just for students who are in those majors. Sayrs said everyone should “try their hand” and practice creativity.

“Art-making should be something that is a part of everyone’s practice,” Sayrs said.

But there is a need for those who commit their lives to art, Michelle Lane, an Honors Tutorial College senior with a double major in the Theater Division in performance and production design and technology, said.

“I think it’s really letting artists have the respect that they deserve,” Lane said. “I know my family looked at me and was like, ‘You’re going to be an art student? You’re going into theater? What are you going to do with that?’ And it’s like, you can do so much and people need to understand that it’s just … as valid as other majors.

We might not come up with the next cure for cancer … but we’re here to entertain people. … The arts is something that regardless of what society you look at there’s always some form of it going on. It’s not something that’s going to go away.”

Mallory Scaife, a junior studying music education, said people should follow their passions, like hers for music.

“If you love doing it, then why would you settle for doing something else?” Scaife said. 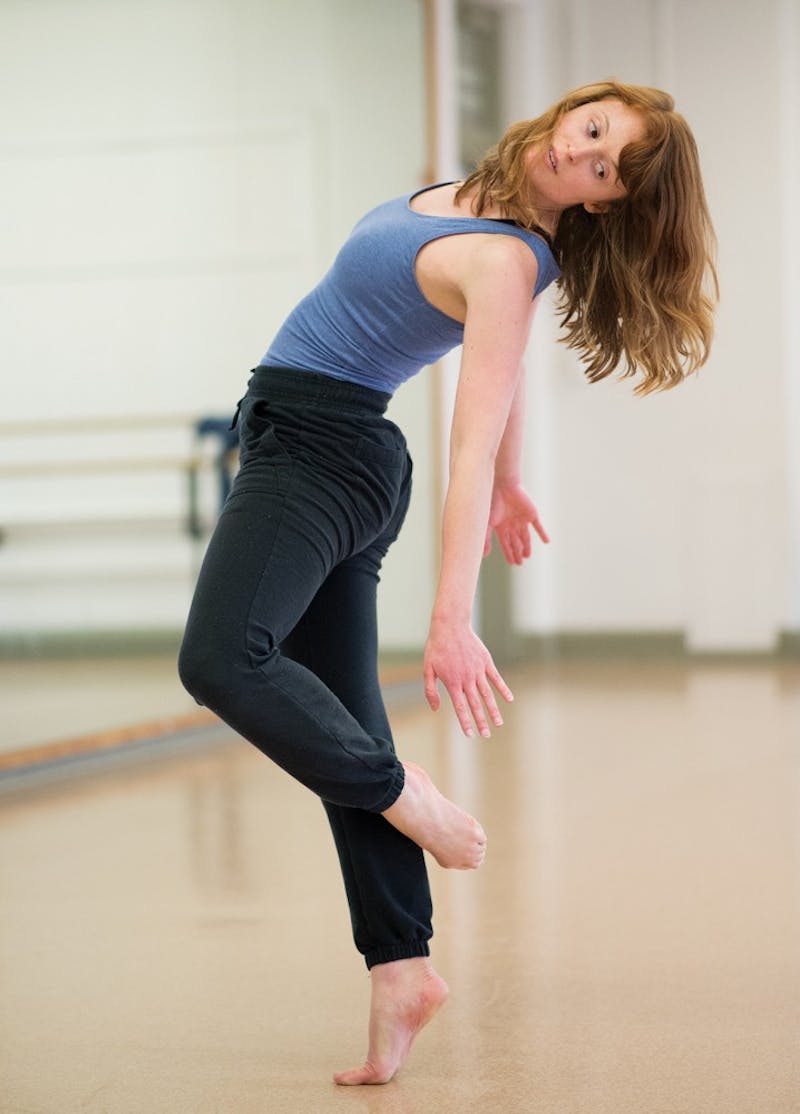 Corrinne Bailey, a senior studying dance, dances in a studio in Putnam Hall on Oct. 25.

The Brain Behind The Steps

She has been dancing since she was 2 years old, but instead of leaping right into the field, Corrinne Bailey wanted to learn the academic side of the steps.

Bailey, a senior studying dance who is from Hilliard, said her education with her major balances between learning the steps of the modern-focused technique and pedagogy. She said the department wants to see its students understand all facets related to dance, including choreography, music, history, lighting and production.

The dance program at OU focuses on modern dance, a form which is more interpretative and leans on abstract movements and ideas.

Bailey said during her first three years as a dance major, she was in rehearsal for about four hours a day, on top of classes.

Now, she is working on her senior project where she is choreographing a solo for herself.

For her, dance is “more than just a hobby.” 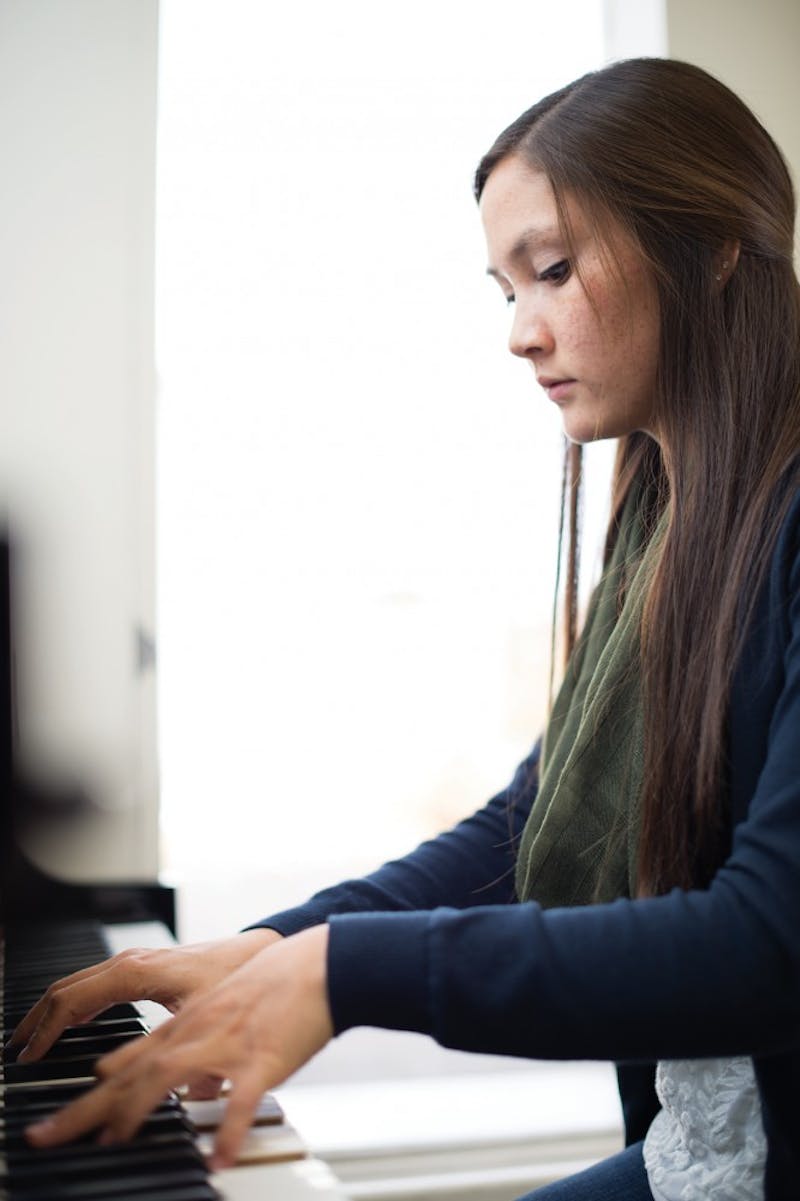 But after months of practicing Concerto No. 1 by Robert Muczynski — a 21-page piece — the OU junior puts her head down and races her fingers across the keys, ebbing her body with each note she plays.

Scaife is a music education major from Wooster, and although her primary instrument is piano, she also plays clarinet and recently picked up bass clarinet.

With her degree, Scaife said she would ideally love to teach middle school or beginner band students.

Music majors, she said, have to go to juries to move onto the next level. It is a requirement to pass the jury to advance in the program.

Scaife is in Wind Symphony, which will play Carnegie Hall in February. She is also a vice president of membership for an honorary band sorority Tau Beta Sigma, a treasurer of Collegiate National Association for Music Education chapter at OU and a section leader for the Marching 110. 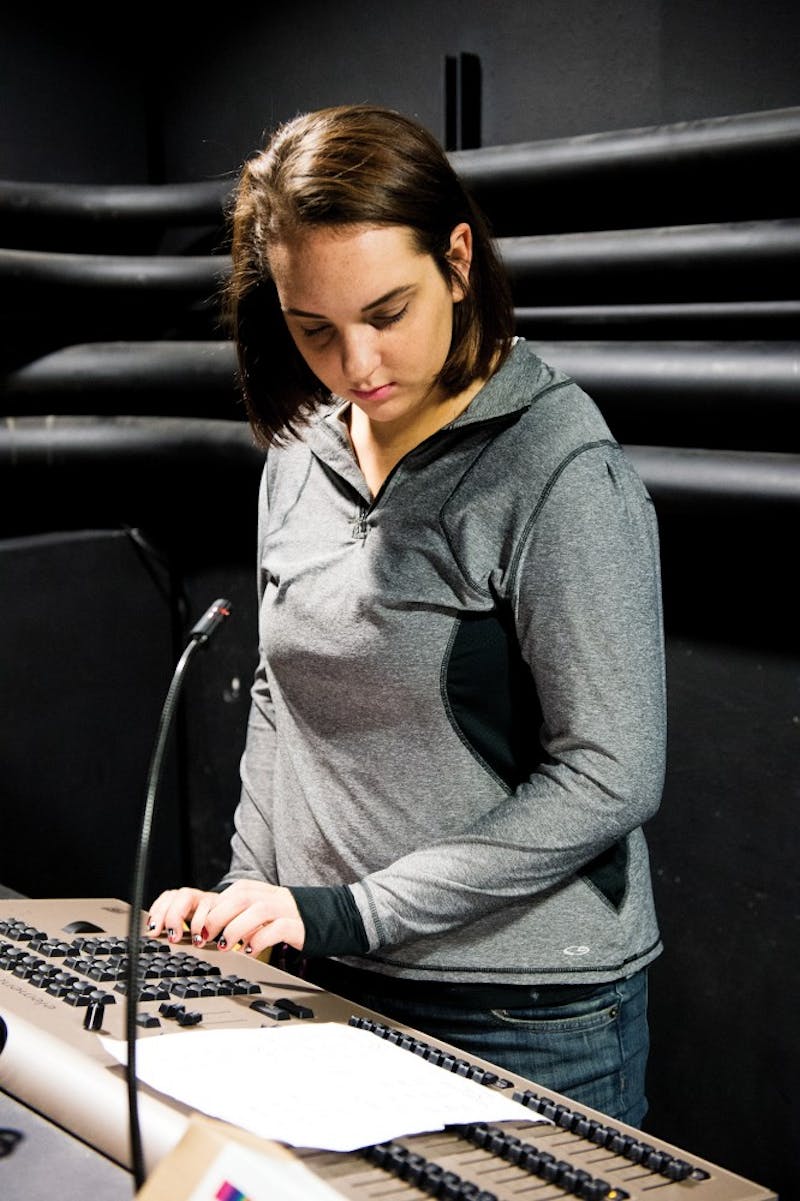 Michelle Lane, a senior studying performance and production design and technology with a focus in lighting, works the lights.

Moving around the grid system above the Forum Theater stage, Michelle Lane looks comfortable. She is standing on metal squares suspended with lights dangling off the edges of the platform, but it is what she loves doing.

She is in the Honors Tutorial College with a double major in the Theater Division in performance and production design and technology, with a focus in lighting.

Lane is originally from Edison, New Jersey. For the future, Lane has dreams to one day own her own production company and to move to a city such as Chicago or Seattle.

She chose to pursue both majors so she is able to understand how actors and those who work backstage operate. She would be able to use that knowledge to help collaborate between the different roles.

Going to a vocational high school led her to pursue theater and attempt to find a program that would let her combine all of her interests. She found that at OU. 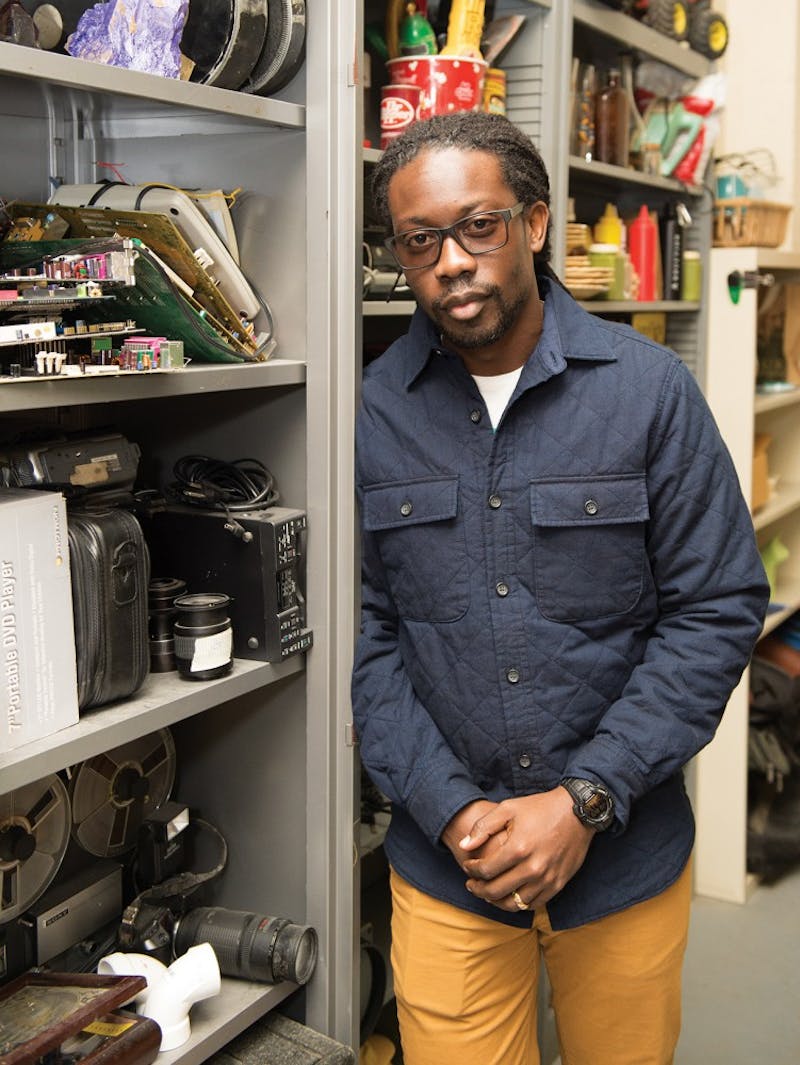 Yaphet Jackman, a third year graduate student studying film, poses for a portrait in the central classroom building on Oct. 28.

Yaphet Jackman said he learned more from a bad film set than any good ones he has been on. He is a thesis film major and wants to pursue cinematography post-graduation.

Jackman is from Guyana in South America and learned about OU’s film major through a partnership between the University of Guyana, which led him to Athens.

Jackman is in his thesis year and is collaborating a screenwriting major to create one work.

He has learned through studying film the amount of funding it takes to create a piece — funding that might not exist. He said he rarely films in Athens, which creates difficulties, but he is looking to do so for his final project.

Though he loves to create — he is not a film geek, a stereotype he thinks comes with film majors. He can’t remember most directors’ or movies’ names, but that doesn’t discredit the work he puts into his projects.

“You just walk around — there’s bits of inspiration everywhere,” Jackman said. “Human beings are such attractive characters. They’re so diverse. They’re so layered.”

Film school, he said, can act as an incubator for future filmmakers. 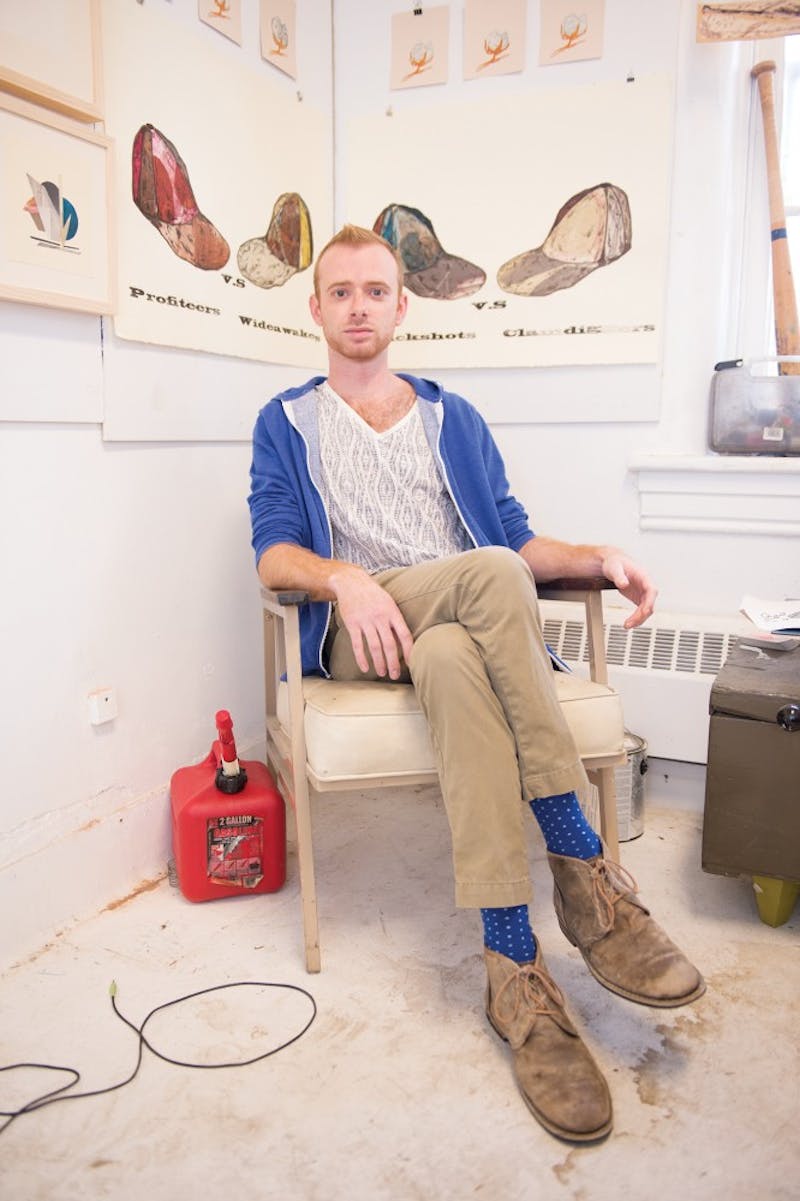 Andrew Barger, a second-year graduate student studying printmaking, poses for a portrait in his studio at the Ridges on Nov. 1.

What is great about printmaking, Andrew Barger said, is that a piece of art can be copied over and over again. A print can be given to friends, can be sold or can be worked on in the future.

Barger is a second-year graduate student studying printmaking. Originally from Atlanta, Barger pursued a degree in art education as well as printmaking at the University of Georgia.

The best way Barger said he can describe printmaking is that it is like he is making a stamp, which can be done on surfaces like wood or etched into copper. Or, as he described it to his parents, “Have you ever heard of Andy Warhol and screenprinting? … It’s kind of like that.”

Barger said during his graduate program, the first year is spent meeting and presenting to a committee that would critique artists’ work to decide if they can stay in the program. This year, he is supposed to continue creating and come up with a thesis idea to work on in his final idea.

Barger had started off creating politically conceptual prints. Now, he is working more with color and form to create abstract pieces that can open up a dialogue between more people. 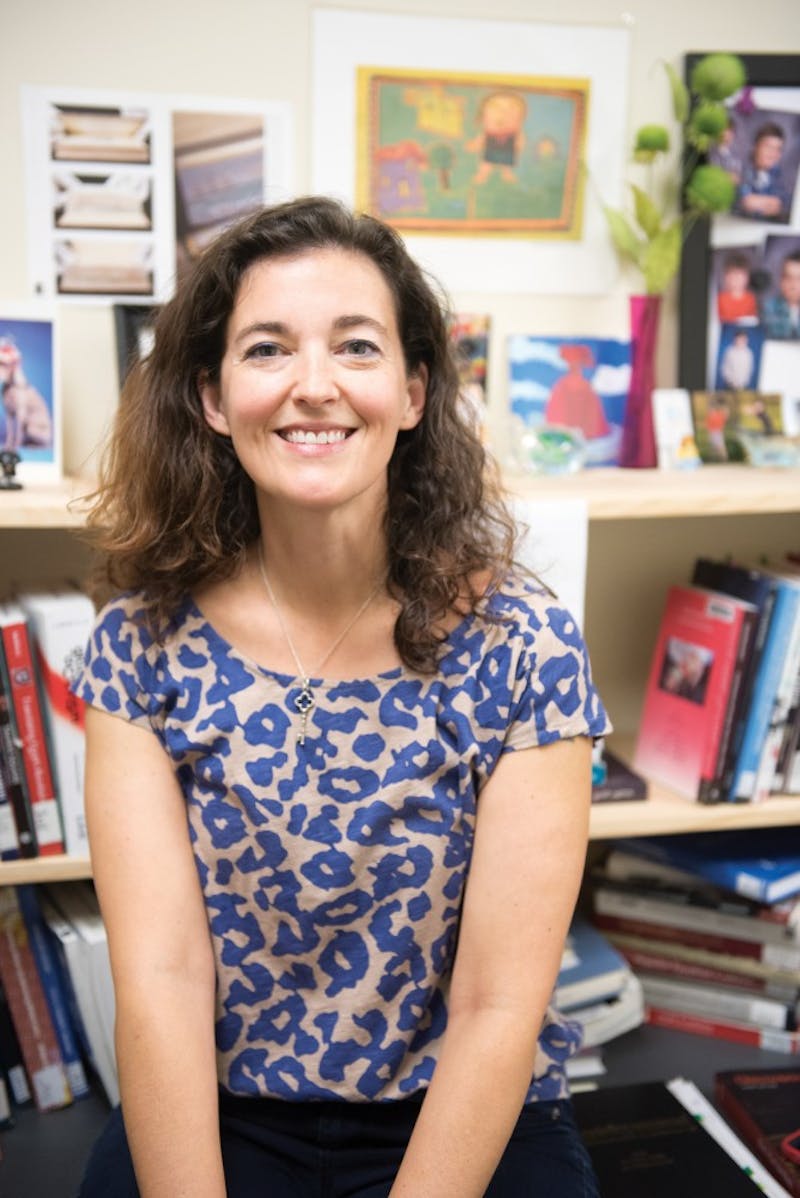 Katherine Hammond, a fourth-year doctoral student studying interdisciniplinary arts, poses for a portrait in her office on 31 S. Court St.

Katherine Hammond grew up in Newark surrounded by art. Her walls were covered with clippings from art history books.

With two parents who performed, painted, drew and nurtured their child with art, it’s not a surprise she went into the field.

As an undergraduate, she initially looked into studying studio art or graphic design. However, after picking up an art history minor and taking the introductory class, she changed her mind.

“I was sitting in this giant, dark auditorium, and I can’t tell you how many times an image of an artwork would come up on the screen, and I would just physically respond to it — I just loved it,” she said.

She received her bachelor’s and master’s degrees in art history from OU.  She had planned on leaving Athens for her doctorate, but the program at OU brought her back.

Hammond is working on her dissertation, which is about graffiti and street art in Egypt following the country’s uprising.