F ashion is a way to express individuality, but with so many brands and mass-producing retailers in the world, it can prove to be difficult to feel truly unique with clothing. 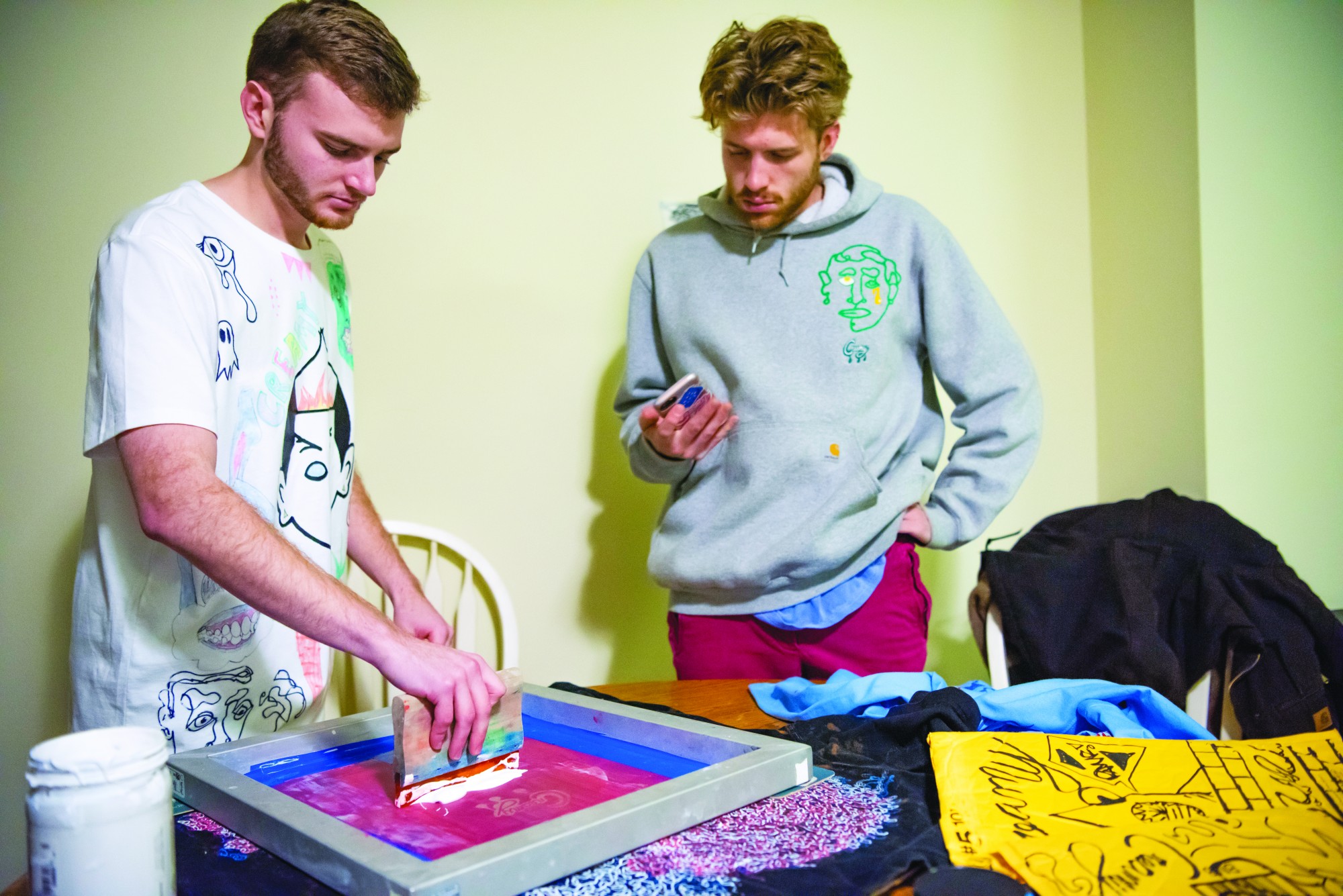 Peter Barrett screen prints the Creamy logo on a one unique piece while Stephen looks over him on Tuesday Nov. 12, 2019

That’s why one Ohio University student came up with a fashion brand that redefines individuality, while utilizing sustainable practices, called Creamy Studios. Stephen Barrett, a senior studying fashion retail, is the brains behind the operation.

“It’s a streetwear brand, but we also like to think of it as a creative studio,” Barrett said. “We don’t want to limit ourselves to just fashion.”

Stephen, along with his brother, Peter Barrett, a junior studying studio art, lead the charge of creating, marketing and selling their fashion pieces, which includes shirts, hoodies and much more.

“It’s so cool to see other people wearing shirts that we’ve made,” Peter said.


But Creamy Studios wasn’t created overnight. The brand took brains, creativity, a lot of help from friends and one big idea.

A man with a plan

In spring 2018, Stephen decided to take a semester off school to soul search through an Outward Bound trip. He needed money to pay for his trip, so he started painting up a few T-shirts and hooded sweatshirts to sell. He made an Instagram for the products and sold them to a few people.

When he got back from the trip, he got Peter involved. With the encouragement of his family and friends, Stephen began to make his small idea a big reality.

Stephen wanted people to buy something from them, knowing it’s going to be unique to them. Creamy Studios sells more than clothes: they also sell artwork, album covers and posters.

Eventually, they want to sell stickers, rather than just including a sticker with each order, and also expand to selling graphic artwork or video services, but for now, that remains on the backburner.

Through the creation of Creamy Studios, Stephen realized he wanted to get out of his education major and switch to fashion retail. He knew involving Peter was the right choice because he was a huge proponent of art and fashion.

“I wanted him to be a part of it,” Stephen said. “I wanted to share it, and we’ve grown closer through doing it together. It’s a lot of work, so we need each other to get it done.”

Growing up, Stephen and Peter both loved thrift shopping. One of their favorite pastimes was to find unique and individual pieces of clothing at various thrift stores, so they incorporated that philosophy into the brand.

A lot of the clothing pieces they use in the brand have been thrifted and redesigned for their customers, but they also take clothes from their customers and design it in whatever way they desire.

The designs and alterations include anything from bleaching and dying the clothes to cutting, sewing or hand painting the clothes. They can also screen print logos or artwork onto the pieces. 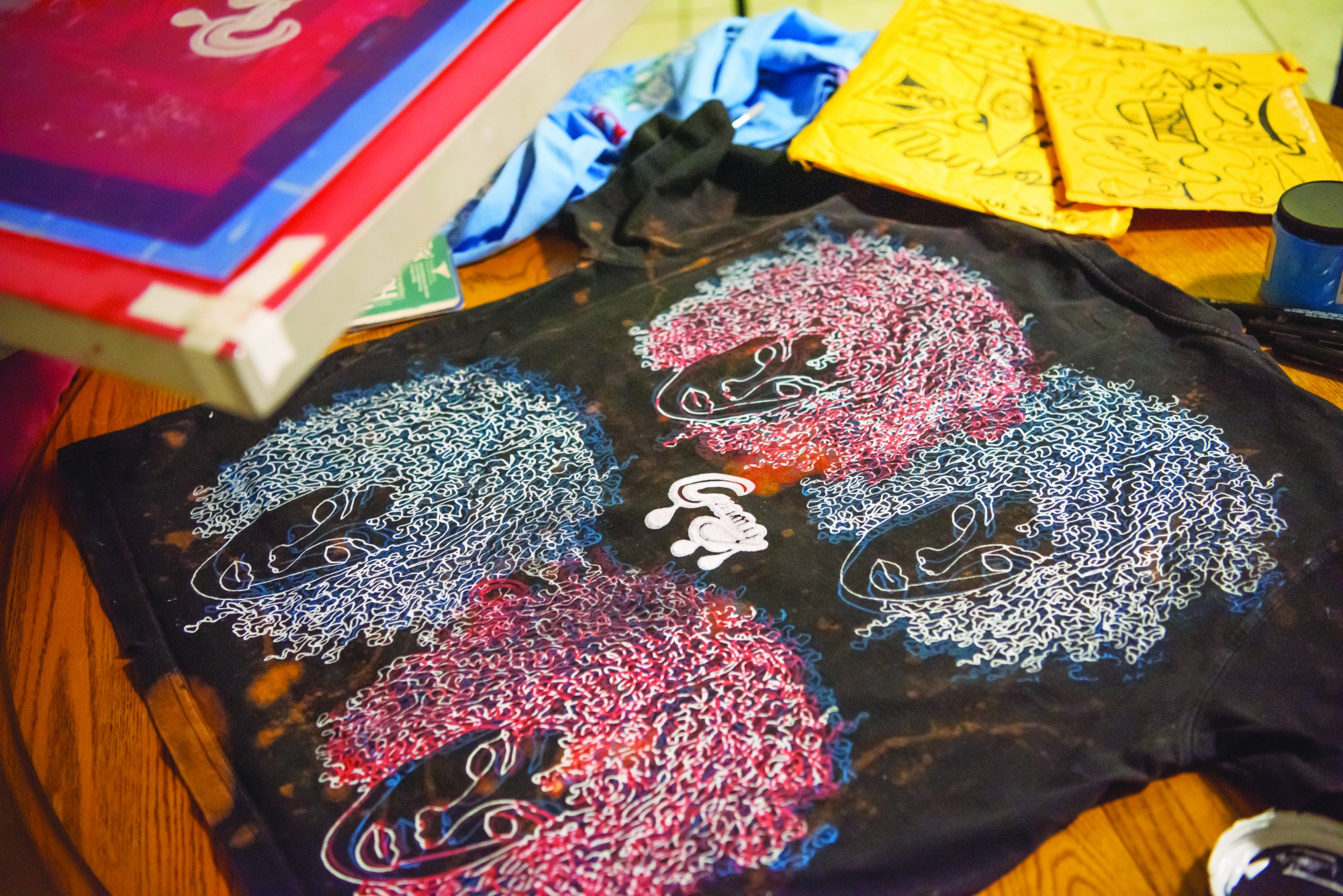 One of Creamy Studio's peice is shown after being completed on Tueday Nov. 12, 2019

Each of their seasonal collections is mainly cohesive through colors and material. Though most of their sales come through their website, they also have a Depop site to sell pieces and will take custom orders or existing piece inquiries through their Instagram account, @creamy.studios. Sometimes their sales are even as simple as their friends looking through their closets, picking out what they like and buying it on the spot.

As the brothers generated excitement around their growing brand, they knew they would need more help. They asked Mitch Suder, a junior studying interactive media, to help out.

Suder mainly helps to plan the photoshoots of the pieces and clothing drops, but like everyone else involved with the brand, he helps out where he can.

“He pitched the brand as ‘artwear,’ and I really like the idea of wearing art,” Bornschlegl said. “It appeals to the side of me that looks at fashion as being a form of expression and artwork.”

Stephen and Peter wanted models to walk in their clothes. Kay Collins, a sophomore studying photojournalism, is one of them.

“I really like their designs and their vision,” Collins said. “I think Creamy Studios is important because they’re open-minded and fresh.”

An idea like this one requires lots of funding, but the brothers have only utilized out-of-pocket funds. All of the money they make goes right back into the brand.

Creamy Studios practices the art of upcycling, which is buying used clothes and reselling them. They’re dedicated to conscious consumption, and that all began when they were young.

Stephen and Peter’s mom inspired them to be passionate about sustainability. They were big on hand-me-downs and thrifting, but it also came from their family’s love of the outdoors and camping. As Stephen and Peter have watched the climate change, they decided it’s important to play whatever role they can in bettering the planet.

“Today’s world is definitely trying to push for a greener world, and generationally, business standards are moving toward that, so I think the culture is more understanding that we need to be more cautious with the planet and global warming,” Suder said. “So Creamy is definitely on the best side of that.” 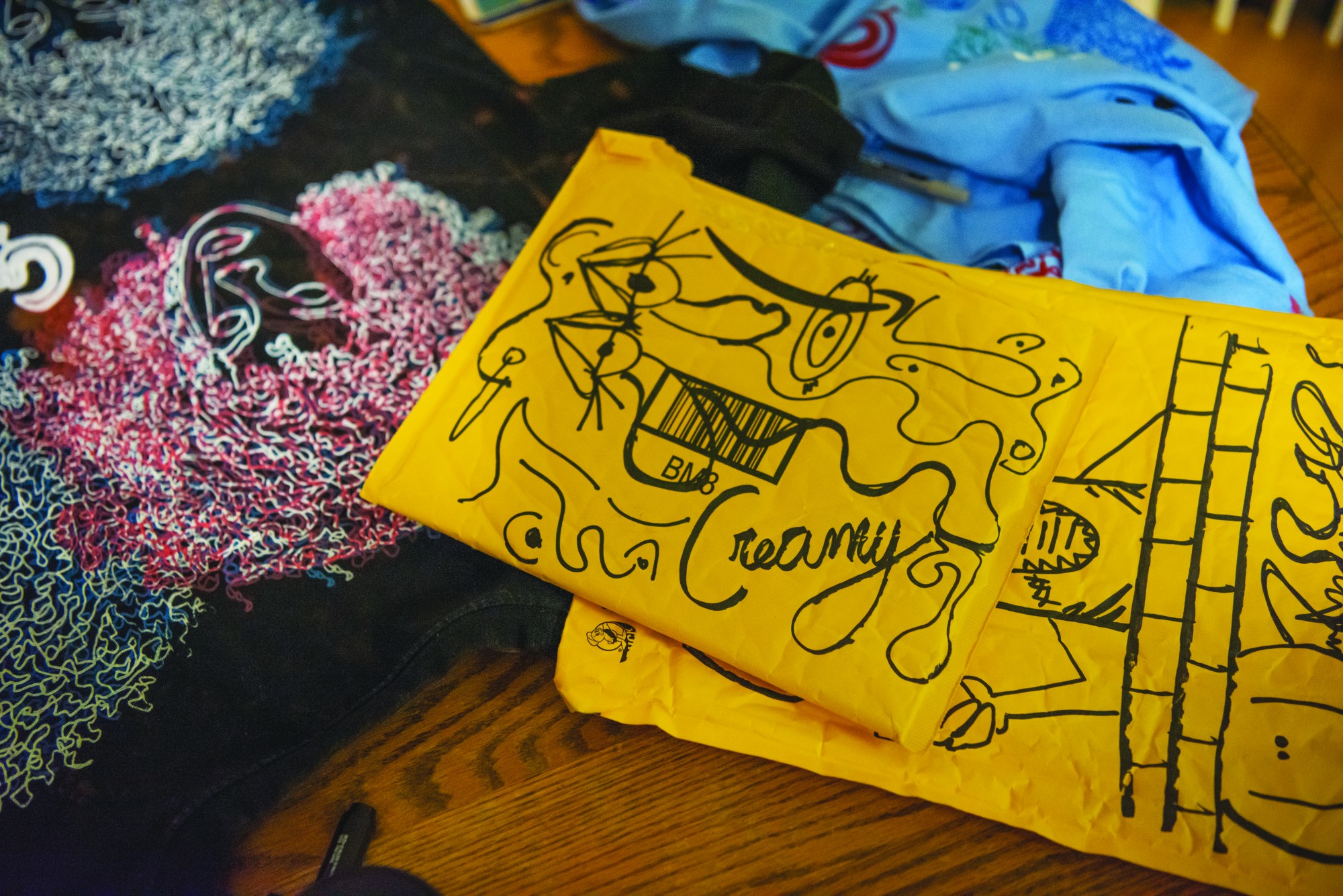 Sustainability through their clothing has been a great marketing point for Stephen and Peter, whose biggest learning experience has been about building the brand and marketing.

“We’re still learning,” Stephen said. “Learning about the fashion industry as a whole, us both coming into it, not knowing a ton beforehand. It’s a very saturated market, so how do we market, and how do we promote the brand? Part of that is our dedication to conscious consumption.”

Their commitment to sustainability has not only drawn customers, but it’s what attracted a lot of the people who help them out with the brand.

“Something that stood out to me was the idea of using recycled clothing and making designs on these recycled clothes,” Bornschlegl said. “The sustainability that he’s (Stephen) emphasizing by recycling old clothing into new art is so inspiring in terms of being mindful of carbon footprint.”

Stephen and Peter have both had the best time creating the brand, but most importantly are happy they could combine their two loves, art and sustainability, into something that they love.

“If we can be creative, and through that try to minimize that carbon footprint, that’s a win in our book,” Stephen said.

More than just a brand

Suder, Collins, Bornschlegl and the other people helping Stephen and Peter with the brand have felt like this is a step in the right direction career-wise.

“It feels like I’m getting my foot in the door with the creative industry, and it feels like we’re cohesively working together toward something,” Suder said. “Whether its social media posts or just playing with the clothes, it’s a lot of fun.”

They know their work is nowhere near finished. In the short term, Creamy Studios was invited to do a show by the organization RAW for underground artists and will coincide its fall clothing drop with the show.

In the long term, both Stephen and Peter would love to be self-employed and work together with a small team to create content. They want to continue producing clothes but also transition into a creative content platform with music videos, concert promotion and more.

Stephen and Peter hope their brand can be an inspiration for anyone trying to get into the fashion industry or simply anyone trying to start their own business. More than anything, the brothers want Creamy Studios to act as a beacon for people to embrace their own creative sides.

However, the brothers’ efforts with Creamy Studios have already greatly inspired the members of their team.

“The act of being able to create with him is really great, so the collaboration is definitely at the top of my favorite reasons of being a part of this,” Bornschlegl said. “Just being able to put my mark on something that’s much bigger than myself and collaborate with these people is helping me mature as an artist, and that’s just priceless.”

Through combining their love for art and sustainability, the two brothers have grown closer than ever. They both know they have Creamy Studios to thank for that.

“Yeah, we were close before, but we’re way closer now,” Stephen said. “Like, we were brothers, but now we’re business partners and friends, and it’s made our relationship richer.”