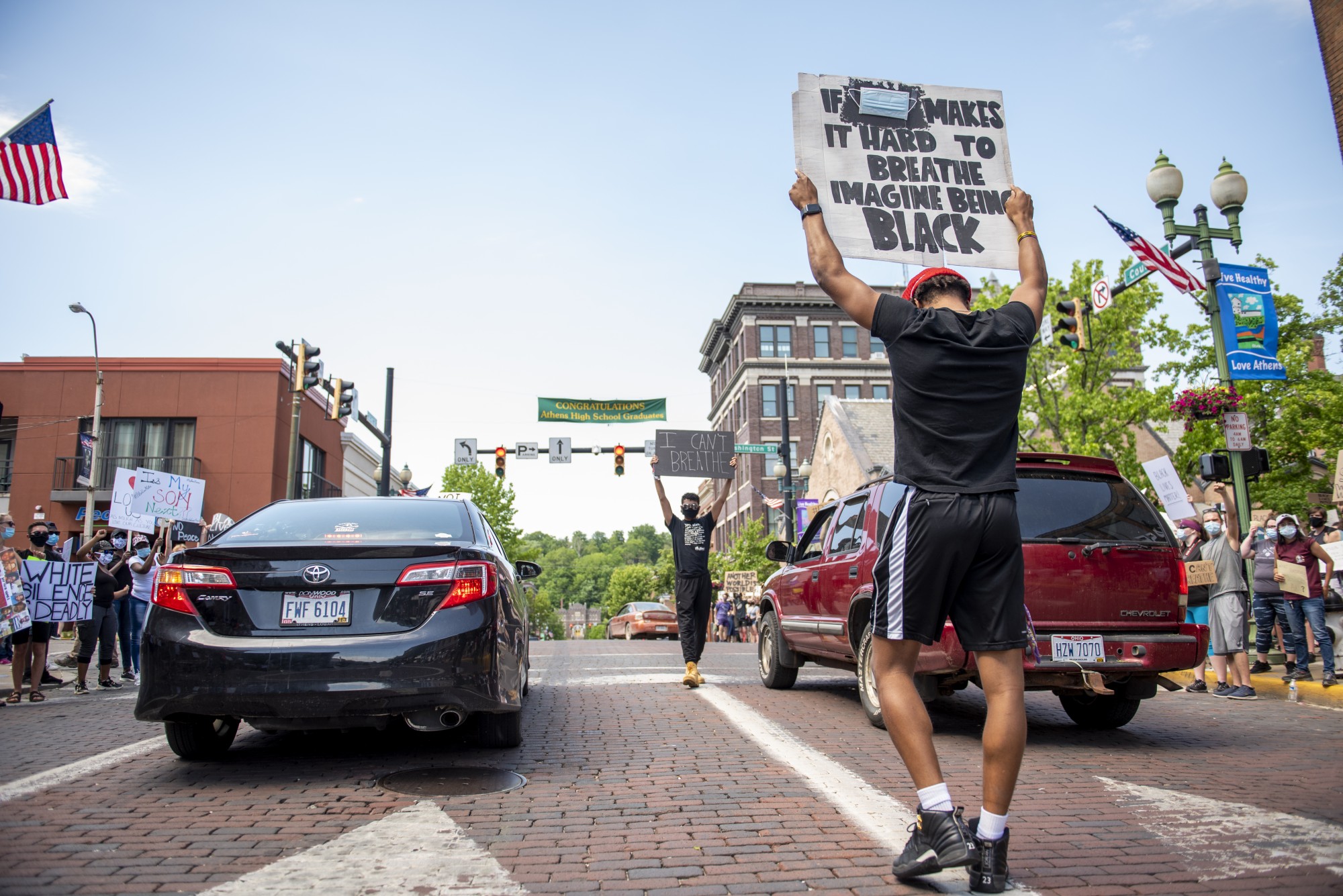 Protesting during a Pandemic

D espite an ongoing pandemic, Athens residents are finding ways to make a change for causes such as Black Lives Matter movements and protesting OU’s budget crisis as well as combatting the widespread challenges of housing and job insecurity.

“I think if anything there has been an increase (in activism), especially with the murder of George Floyd,” Mayor Steve Patterson said.

Patterson said during the Black Lives Matter event that took place outside of the courthouse this summer, the majority of people were trying to social distance and wearing face coverings.

He said gatherings are limited to 10 people or fewer, and social distancing is still required. Venues are also only able to operate at 15% capacity. However, Patterson said he has still seen activism on Court Street and was aware of peaceful protests on campus.

“It doesn't mean you can't protest,” Patterson said. “It just means that you need to be doing it responsibly, and most importantly, by wearing a face mask, you're really not protecting yourself. You're protecting those around you. If everyone’s wearing a mask, then you’ve got a lot of protection all the way around.”

Patterson also said there is also still a “good number” of people attending virtual city meetings. He said there are anywhere from five to 30 attendees, and they are able to have breakout rooms with OU journalism students covering the meeting for classes.

He predicts people will continue to be cautious, and he notices Athenians getting more used to masking up. Overall, Patterson said he has seen Athens residents protesting responsibly.

“We can't let our guard down,” Patterson said. “You need to keep wearing masks. You need to keep washing your hands often, social distancing, all the things that we've been doing, even after we start to have more and more people vaccinated.”

Patterson said locally, Athens issued two grants: one for rent and mortgage relief and one for utilities. These were issued through the Hocking Athens Perry Community Action, or HAPCAP, for those who were economically affected by COVID-19. He said Athens was also one of the last municipalities of its size to start sending out disconnection notices.

Patterson also said with spring coming up, the city would normally hold Athens Beautification Day that includes both university students and Athens citizens cleaning up the city’s outdoor areas. He said residents who want to get involved with city projects can contact the city, but safety protocols will have to be in place.

“The protocol is going to be the same,” Patterson said. “You need to social distance when you're, say, working on the new Stimson Avenue roundabout and helping plant flowers or something, and wear a mask. Those are our big requirements, and that holds true for a lot of things.”

Damon Krane, local activist and former mayoral candidate, said during the BLM demonstrations in the summer, COVID-19 was a concern. However, as time went on, he noticed people being more conscious of social distancing and wearing masks. He said despite the pandemic affecting visibility with in-person demonstrations, there are still public issues going on, such as Faculty Senate’s recent vote to disregard the special committee report for journalism professor Yusuf Kalyango’s reinstitution of tenure.

“It's definitely had an impact,” Krane said. “But at the same time, I know that a lot of folks have been working on things more behind the scenes. I think that the situation with, say, Yusuf Kalyango … There were things happening that you often, the local media, would cover to show student reaction (and) faculty reaction, and then to make you know what we saw … at the Faculty Senate meeting the other night happen.”

“I think there's no choice but to organize if we want to change the world for the better. There are certainly ways to protect yourself and limit the likelihood of spreading the virus while engaged in these activities, but I think that organizing is going to continue regardless, and we've certainly seen a lot of strong local organizing and activism this past year.”— Damon Krane, local activist and former mayoral candidate

Krane also said while virtual meetings may, theoretically, make it easier for more people to be involved in city issues, Southeast Ohio is lacking in broadband internet connection. However, he said the option to join meetings virtually should still be there after the pandemic.

“I hope that when (City) Council does go back to in-person meetings, that option remains for people to call in with a comment because we have the technology to do that, and it increases democratic participation,” Krane said.

Once it is safe to have in-person gatherings, Krane said he thinks people will be as cautious as they can.

“I think there's no choice but to organize if we want to change the world for the better,” Krane said. “There are certainly ways to protect yourself and limit the likelihood of spreading the virus while engaged in these activities, but I think that organizing is going to continue regardless, and we've certainly seen a lot of strong local organizing and activism this past year.”

Krane also said he’s seen and increased focus on local issues in recent years, even with the pandemic.

“Part of what I've seen since then is more of a focus, not in any way ignoring the broader issues but focusing also on their local manifestations,” Krane said. “So, things like the housing crisis and evictions and all of that, I mean that's that's an international issue right now, but we can work on it locally — same thing with the movement for Black lives.”

Krane said with the distribution of vaccines, community organizing may increase, but he said he has not seen it slow down much over the last year.

“My advice, really, is for people to seek out organizations that already exist and when they don't already exist to create them,” Krane said. “And ideally something that's lasting, that isn't just focused around a one particular demonstration or one particular petition, but to really be ongoing.”

Olivia Gemarro, a senior studying English-creative writing and sociology criminology, runs the #SaveOUrProfs account on Twitter, advocating for professors to be able to maintain their contracts in the midst of OU’s budget crisis. Gemarro is no stranger to making a difference through social media but wishes the option for in-person events was available.

“We know strategically and safety-wise that it would be impossible to have a protest in person. There’s just too many risks involved,” Gemarro said. “Social media seems to be working for us enough that, hopefully, we’re all adapting to not having as many in-person experiences anymore. We’re on social media more often anyway.”

With nearly 2,000 followers, the account has followers who are professors from across the nation, Gemarro said.

“We definitely have a further reach … but I can't help but think that we'd be able to change something somewhere anyway if we weren't in a pandemic,” she said. “So I feel like the success on social media isn't really contingent upon the pandemic.”

Gemarro also said she feels the lack of in-person rallies or protest aids in the university being able to ignore them more. 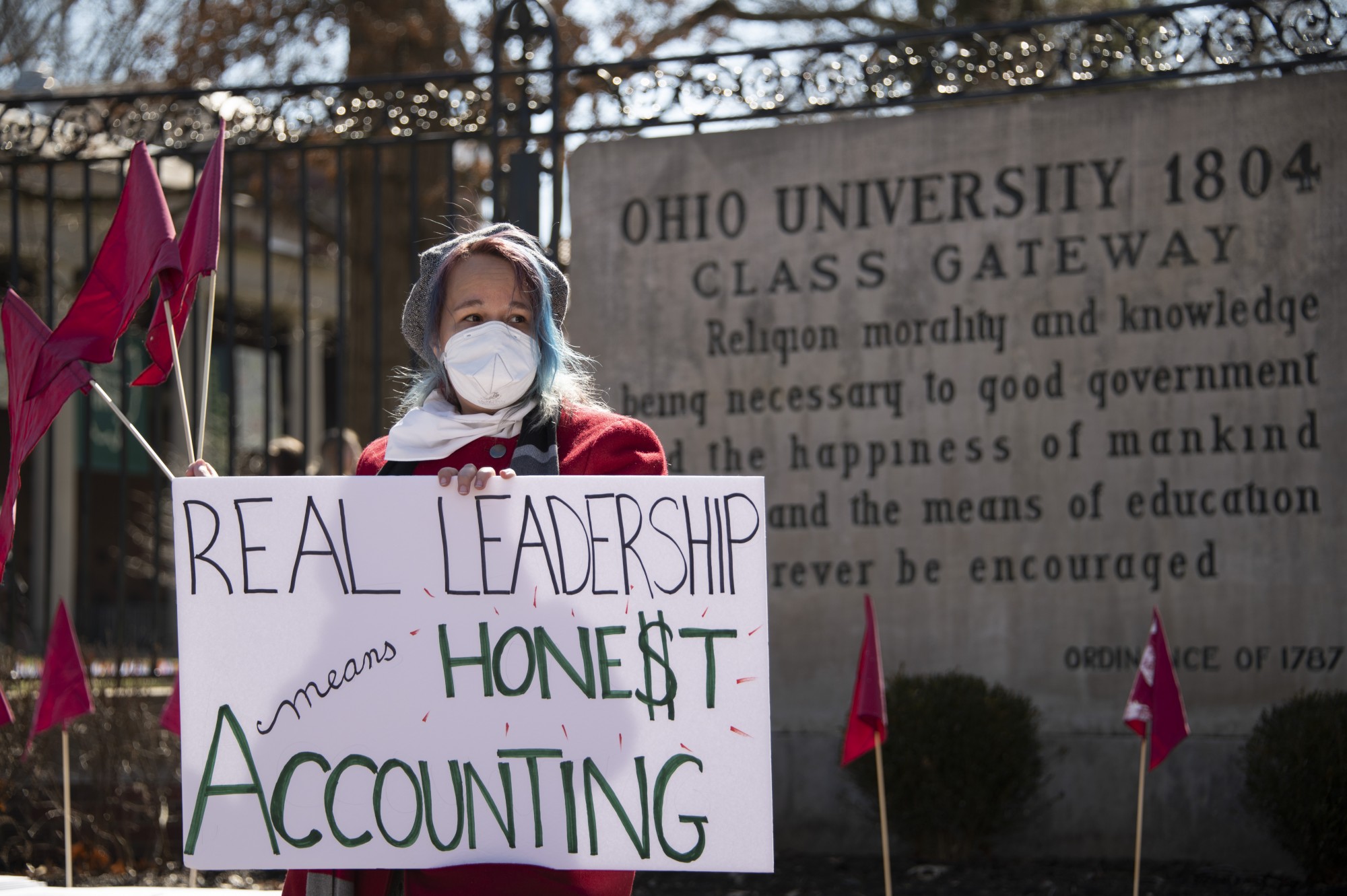 Ohio University faculty and Athens community members gathered outside of the class gateway, on college green, in support of the faculty that was laid off last spring on Wednesday March 3, 2021 in Athens, Ohio.

“We're not physically there making the statement,” Gemarro said. “I won't lie. I mean, it's been very frustrating to not be able to take it a step further, but we've been showing our presence as much as we can.”

Gemarro has also seen an even split between local and national issues in Athens.

“SaveOUrProfs is a localized effort, but at the same time, I’m very aware of the budget crisis and how it’s impacting higher education throughout the nation,” Gemarro said. “I’ve also seen a lot of local businesses step up in this type of national crisis and emergency, donating meal. I've seen a lot of people being really accommodating and really understanding.”

Julie White, a political science professor and the vice president for the OU chapter of American Association of University Professors, or AAUP, said there have been challenges in organizing during the pandemic, such as meeting people virtually.

“Working with people for the first time on a zoom meeting it can be difficult to ‘read the room,’” White said in an email. “That said, one of the things I think is actually sometimes easier is coordinating our work with other chapters around the state and working with colleagues at national AAUP.”

Currently, OU-AAUP is working toward its goal of shared governance between administration and professors as well as advocating against professor layoffs due to the budget crisis.

In the spring, White said, AAUP worked with the American Federation of State, County and Municipal Employees, or AFSCME, to hold a COVID-19 safe car rally. White said the rally began at the Peden stadium parking lot and circled the green. White said participants held signs like “chop from the top” or “Save OUr Prof.”

“While representatives from both organizations spoke about a shared commitment to protect workers, the crowd expressed their enthusiasm from the safety of their vehicles,” White said in an email.

White said in light of COVID-19, OU-AAUP has adapted its work and worked with Save Ohio Higher Ed to organize a panel that addressed how universities contribute economically to rural areas.

“We have continued to offer critical analysis of the budget situation here at OU. And we are actively involved in protecting faculty with concerns about academic freedom,” she said in an email.

OU-AAUP has also had the opportunity to connect with professors from around the nation, from University of Vermont to Oregon state, White said. However, she said flexibility among members during this time is varied, as some are also juggling changes in their children’s education and their own teaching loads with the university.

Jacob Jakuszeit, a library support associate and the president of AFSCME 3200, which was formed within the last year, said while his branch did not organize the car rally, it has faced challenges in starting their branch remotely. Jakuszeit said it has yet to have an in-person meeting since it’s formed.

“So it is really challenging because you can't just sit around the table and discuss something,” Jakuszeit said. “However, for our union, our local 3200, it's really shown the importance of always having it for the future, an online component, or at least a phone-in component because we have folks that were based out of the Southern campus that live in Kentucky … So we have people from all over the state. And to really represent all of our union members, it's important that they always have access to our meetings and those conversations.”

While he does think it is easier for people to get involved, Jakuszeit said, he believes they are missing out on valuable aspects that come with being in person. With working remotely as well, he said being at a computer for a meeting can feel continuation of the work day for many people.

“I also think that we're missing the incidental conversations and contacts that come up with being in the same place being near each other,” he said.

However, activists like Gemarro are hopeful for more in-person events in the future.

“After the pandemic — if I can even say that; I feel like that's not even a thing — once we adjust to the new normal and feel safe enough and can venture outside these boundaries that we've created for ourselves, then I feel like we'll definitely see more in-person efforts,” Gemarro said.