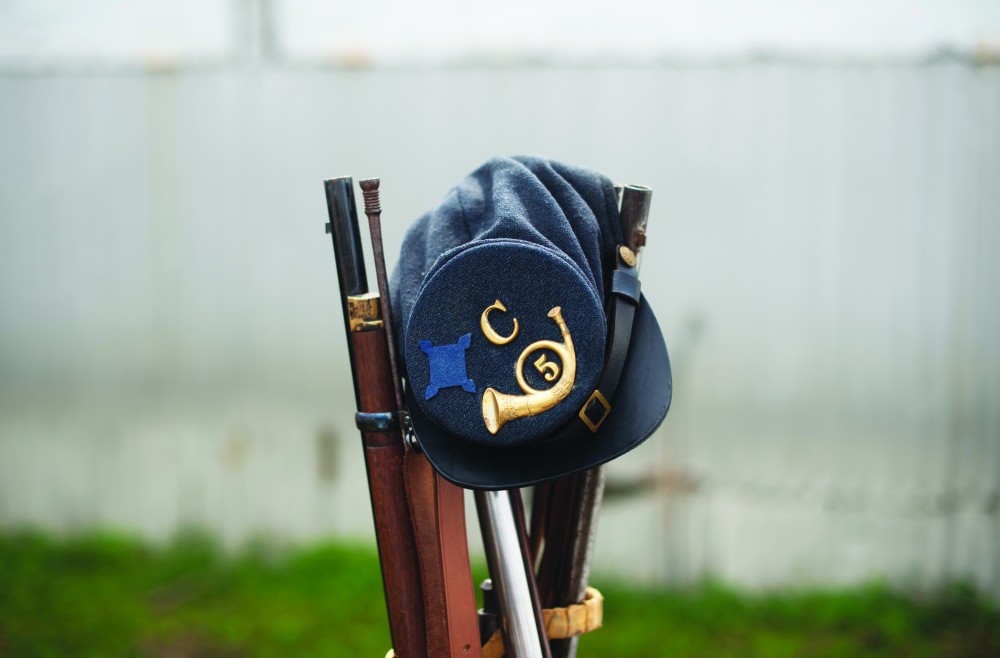 A Civil War hat displayed on rifles at the Emancipation Day event in Gallipolis, Ohio.

Civil War reenactors share
their love for history,
educating people
and their fears of
a dwindling subculture.

A t dawn on an eerie morning in Sharpsburg, Maryland, the firing of a hundred cannons lit up the dark sky, illuminating the bodies of thousands of men reenacting the bloodiest day in American military history.

Among the many Union soldiers at the reenactment of the Battle of Antietam in September 2012, Jim Oiler found it to be one of the more frightening and realistic American Civil War reenactments he had been a part of in the past 20 years.

“Reenacting in ways that represent the true diversity of the history being taught is one way of making it more appealing to a more diverse, educated, American public,”-Brian Schoen, associate professor of history at OU

“Nobody could see anything, and people were slipping on the rocks,” Oiler, the commander of Cadot-Blessing Camp #126 of the Sons of Union Veterans, an organization dedicated to preserving the history and legacy of those who fought to save the Union, said. “It’s a wonder how we didn’t stab each other. The ground was shaking, and the smoke was rolling. It was a mess.”

Oiler recently attended the 156th Emancipation Day in Gallipolis, billed as one of the longest continually-running celebrations of the Emancipation Proclamation in the U.S. There, he served as the liaison between the Sons of Union Veterans and the 5th United States Colored Troops (USCT) Company C.

More than a hobby

While the 5th USCT is no longer serving in combat, many men keep its impact alive through reenacting. The 5th USCT was formed as the 127th Ohio Volunteer Infantry at Camp Delaware in 1863. A key battle for the regiment was the Battle of New Market Heights in Virginia, a vital part in the Siege of Petersburg. Out of the 14 Medals of Honor given to the USCT at the Battle of New Market Heights, four of them were bestowed upon men of the 5th regiment. 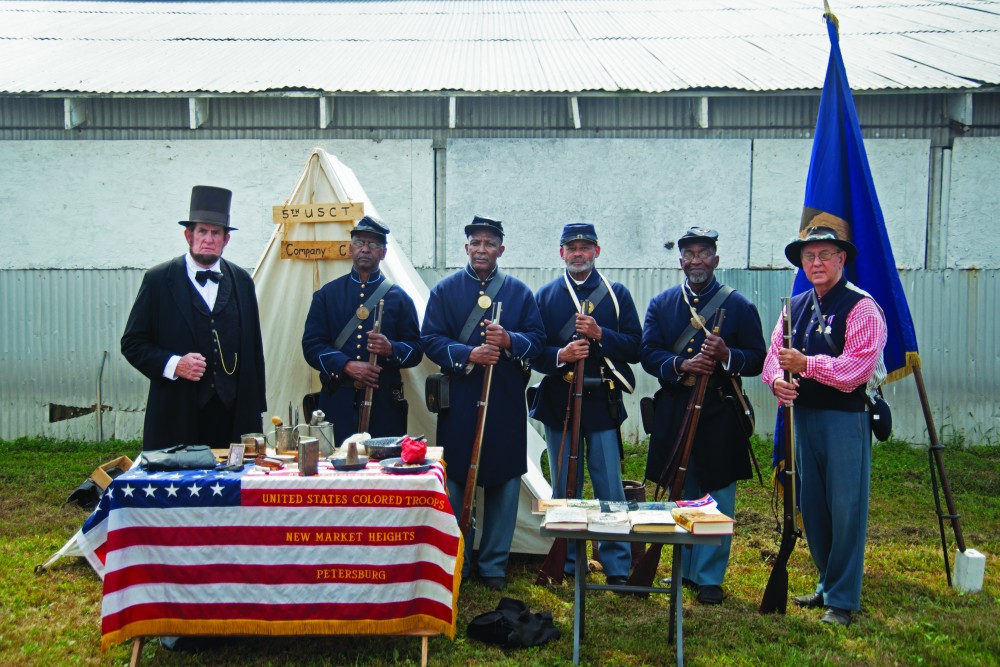 While some may think Civil War reenacting is just a hobby, it’s much more to these men. The countless hours traveling from one battle or event to the next, the thousands of dollars spent on the authentic look of a character and the educational purposes of reenacting all create a distinct lifestyle Oiler and many others have come to cherish.

As a retired electrician, Lee Randles mainly works around his house with the occasional reenactment event here and there. In Randles’ 20 years with the 5th USCT, he’s been to numerous reenactment battles the original regiment was part of as well as several other battles in Kentucky, Tennessee and Florida.

“I would say we used to do about 20 or more events in a summer,” Randles said. “A lot of driving back and forth or just going to see stuff along with reenacting. We were just trying to grasp history. It’s just so vast.”

One of Randles’ more memorable reenactments was the Battle of Olustee that takes place every February near Lake City, Florida. Olustee was Florida’s largest Civil War battle and a sight to behold for Randles.

“When I was there, there were 500 or so African-American (Union) troops while there was maybe 2,000 to 3,000 Confederate troops,” Randles said. “We’re just standing there firing on the battlefield. It seemed like (the Confederates) never stopped coming out of the woods.”

Reenactments like that are what drive Randles’ love for history, as he travels proudly in uniform to educate interested civilians and meet fascinating people.

“It’s much more than a hobby,” Randles said. “I love for people to come ask me things, and I love asking them questions. The stories I’ve heard are just so enjoyable to listen to. It’s amazing. Nowhere else than being in reenacting can you get that and see that.”

Oiler himself met plenty of compelling people as an extra in the war movies Gods and Generals and American Drummer Boy.

Oiler and the other extras would be up before the sun rose and out on the battlefield for a full day of filming. Despite the long work days on the set of Gods and Generals in Staunton, Virginia, and Sharpsburg, Maryland, Oiler had the opportunity of meeting Stephen Lang (Stonewall Jackson) and Jeff Daniels (Joshua Chamberlain).

“It was quite the experience,” Oiler said. “A lot of it was hurrying up and then waiting. Maybe an hour later, we’d do one charge and then — ‘Cut! Let’s go back and do it again.’ We may do the same thing three to four times.”

While most reenactments are meant for public viewing, the retired high school science teacher enjoys the select few shared only among the reenactors themselves. One of his favorites was in 2004 when he traveled with the 91st Ohio Infantry to Shiloh, Tennessee, sleeping in a tent in 19 degree weather.

“There’s a lot of things in reenacting that the public don’t see that makes it realistic to the reenactor, and that’s what makes it fun,” Oiler said. “When you do it for the public, you’re putting on a show, but you try to be as realistic as you possibly can, and I’ve really enjoyed my time reenacting.”

The educational aspect of Civil War reenacting is one of, if not, the driving factor as to why Clark Morgan joined the 5th USCT. 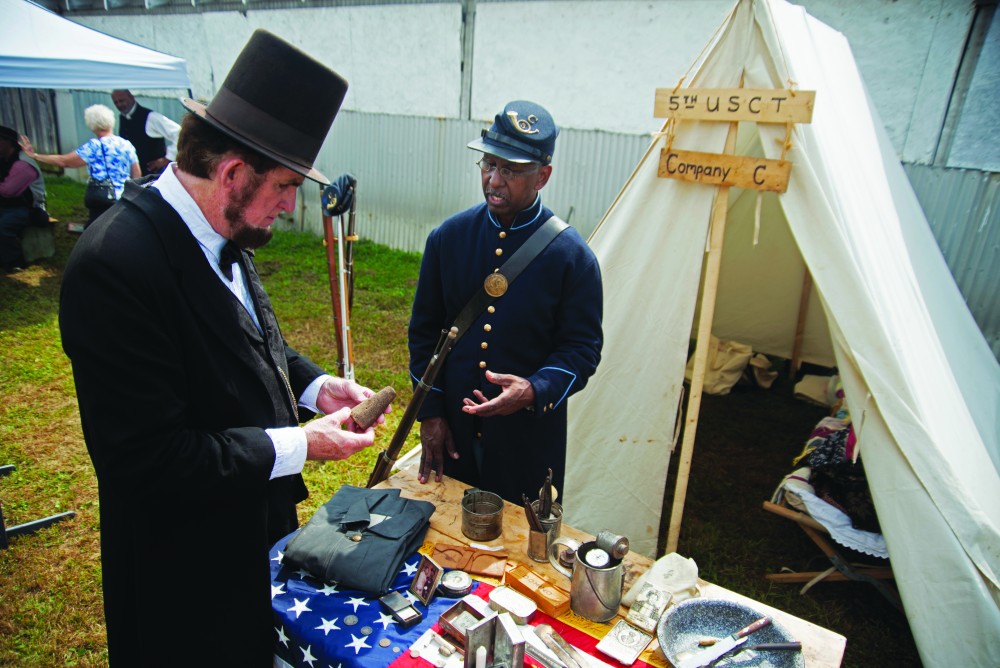 Clark Morgan shows the Abraham Lincoln reenactor portrayed by John W. King the equipment laid out on the table during the Emancipation Day Event on Saturday, September 21.

The minister of Love Missionary Baptist Church in Swanton takes a lot of pride in the authenticity of the way his characters look. From weapons to clothing, Morgan spends thousands of dollars to make his outfits as genuine as possible.

Many reenactors buy all their reenacting needs from Civil War Sutler websites. These websites hold everything from working pistols and rifles to military pants and vests. The diverse range of products gives any reenactor the chance to be as original as possible.

“There’s a term in the reenactoring community called the 10-foot rule, where everything should look legitimate 10 feet or farther away,” Morgan said. “But I like to go by the 5-foot rule. I like for it to be looking real up close.”

With the many characters Morgan reenacts, including the more modern hero Martin Luther King Jr., he’s either holding presentations or at a reenacting event at least once a month, sharing his broad knowledge of whichever character he’s playing that day.

A more prominent character of the past Morgan reenacts is Sergeant Major Milton Holland. Holland was denied enlistment because of his biracial descent until 1863 when troops of color were integrated in the war, and he joined the 5th USCT in Athens. Holland was awarded a Congressional Medal of Honor for his acts of heroism at the Battle of New Market Heights.

Along with Holland, many men from Athens and the Southeast Ohio area enlisted, due to the area’s proximity to West Virginia and Kentucky, border states that had to be propped up to remain loyal to the Union.

Through careful research, Carl Denbow, director of communication emeritus at Ohio University, discovered a large portion of men from Southeast Ohio participated in Sherman’s March to the Sea in 1864. The march took place in Georgia from Nov. 15 until Dec. 21, its victory leading to the eventual surrender of the Confederacy.

“Something like three of every 10 military-age men in Southeast Ohio were on the march,” Denbow said. “That means practically every family in the Southeast had a father, brother or someone who was involved. It affected this area pretty dramatically.”

OU itself was forced to close down during the war since most of the students were away fighting. With that in mind, the magnitude of the Civil War and its repercussions are facts Oiler believes America still struggles to face today, negatively affecting the reenacting subculture.

“I hate to see it dwindling. I’d just like to see more young people in it,” Oiler said. “They just don’t want to admit history happened. I think we need to teach history in schools because we can’t deny what our country went through.”

Although Denbow agrees with Oiler that the lack of teaching Civil War history is part of the problem, he attributes the decline in reenacting to the cyclical nature of the activity. 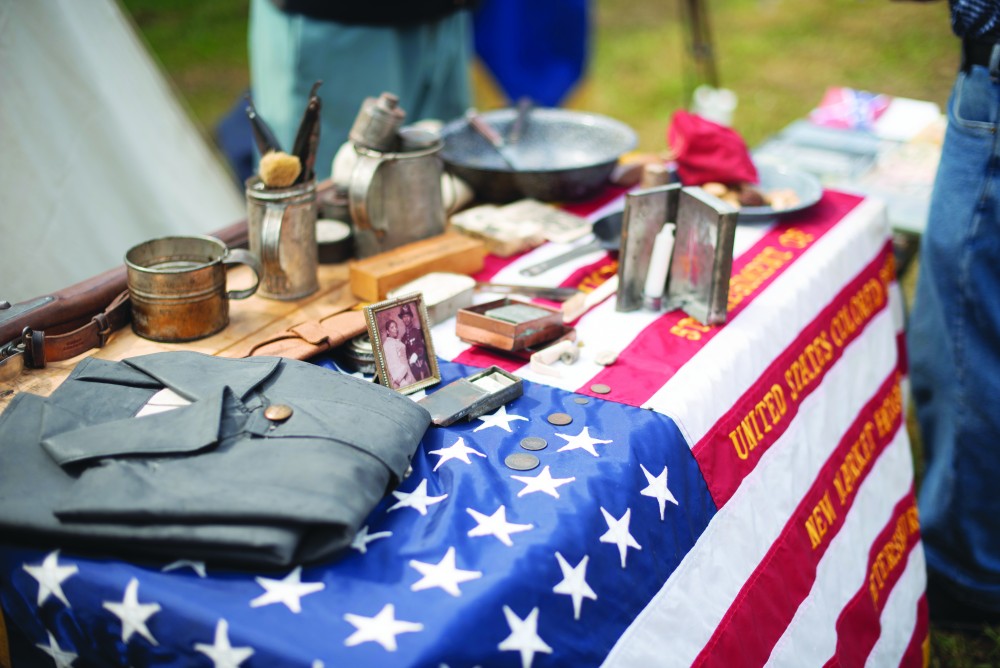 Civil War era tools and equipment is displayed at the annual Emancipation day event at the Gallia County Junior Fairgrounds on Saturday, September 21.

“When they had the 100th anniversary in the 1960s, there was a big upswing, then the 150th, there was another upswing, but now that’s kind of over,” Denbow said. “Whenever there’s one of these anniversaries, there’s a lot of articles and things on television about it that creates interest.”

Brian Schoen, an associate professor of history at OU, agrees with the normal ebb and flow of the activity’s prominence in educating people on the Civil War, but he thinks part of its decline may also be a generational issue.

“There are other ways people are engaging the past that are just different from an era in which reenacting was a primary way of doing that,” Schoen said. “It may also well be the role of video games and virtual reality that make the actual act of reenacting less central for people who are still interested in knowing the history or even envisioning what the past might have looked like.”

As somebody who believes strongly in the need for history to be taught, Schoen agrees the more students exposed to the past, the better, but he does believe the Civil War is being taught in ways that are responsible in understanding the conflict.

The presence of a more diverse representation of America’s history is a possible reason that could give reenactors hope to continue being an educational tool for all.

“Reenacting in ways that represent the true diversity of the history being taught is one way of making it more appealing to a more diverse, educated American public,” Schoen said.