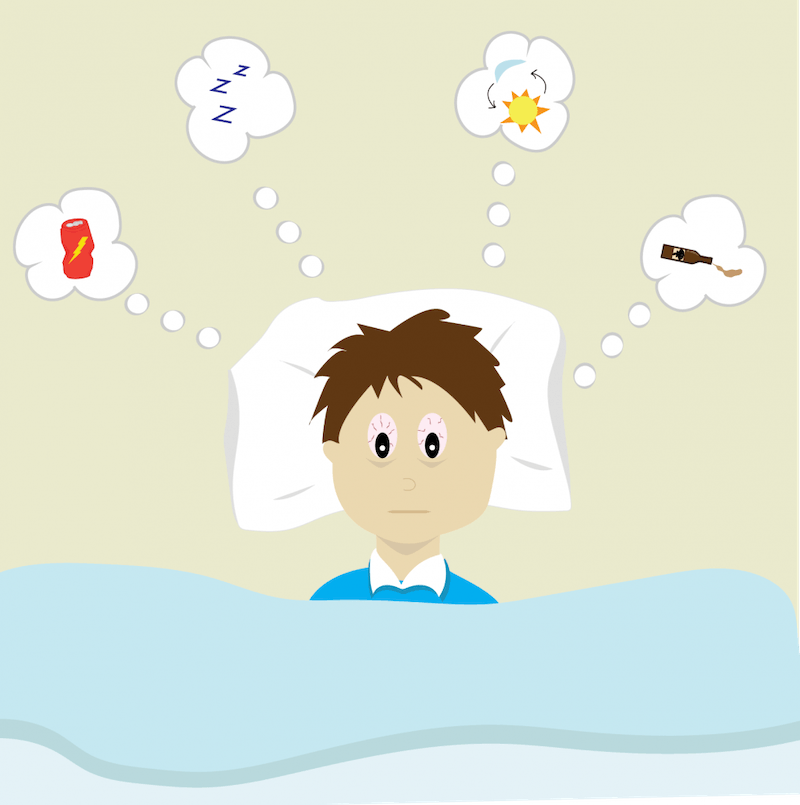 In the middle of the semester, students track their grades, study for exams and try to meet up with friends in the process. When balancing school and social life, sleep can be waved off as no big deal and is often neglected.

People may think having poor sleep habits will only lead to groggy mornings and mild fatigue throughout the day, but a lack of sleep can also be detrimental to a young person’s health.

“People have terrible sleep habits in general,” Susan Borchers, a private practice doctor for Ohio Health, said. “I can treat most insomniacs by just talking to them and educating them about their sleep habits.”

One in three adults don’t get enough sleep, according to the Centers for Disease Control and Prevention. If bad sleeping habits are not corrected at a young age, people run the risk of obesity, anxiety and depression, Borchers said.

It’s being mindful about activities college students don’t think twice about — napping or consuming large amounts of caffeine — that can prevent such difficulties later in life.

What sleep deprivation is, and the symptoms

Anyone who chronically gets less than 6 hours of sleep per night is said to have sleep deprivation.

Making up for lost zzz’s

Students often wake up early for classes or go to bed late as a result of schoolwork. Some days, it may be both. When weekends arrive, it’s an opportunity to catch up on lost sleep from the week.

Even though people try to make up for a lack of sleep by sleeping in, having a regular sleep pattern will help prevent multiple mental and physical health problems, Peggy Zoccola, an associate professor of psychology, said. Studies show that adults who get less than six or more than nine hours of sleep per night have a shorter life expectancy than those who get the recommended •six to eight hours a night.

“It’s not the same as getting a full night sleep each night,” Borchers, who is board certified in sleep and pulmonary medicine, said. “People get sick because your immune system just takes a nose dive when your sleep is off like that.”

How to have a good sleep hygiene

It’s not uncommon for students to walk to their classes with a coffee cup, energy drink or bottle of soda in hand.

An 8-ounce cup of coffee averages between 130 and 150 mg of caffeine. A healthy maxiumum amount of caffeine a person can intake per day is about 400 mg.

Melly Miller, a bartender at The C.I., is used to staying up until 4 a.m. because of her shifts on the weekends. Her weekends are not used for catching up on sleep, but to make money.

During the week, she buys an espresso drink from Brenen’s Coffee Cafe every day. Miller, a junior studying nursing, says she mostly does it because she was up until 2 a.m. the night before studying. In addition, she drinks a pre-workout mix that contains caffeine.

Caffeine keeps her going throughout the day, and as a nursing student with a part-time job, it’s an easy choice for her.

“I forget a lot of stuff in lectures, and I fall asleep in class,” Miller said. “I’m always tired.”

It’s a common misconception that the more caffeine people drink, the more alert they will be. However, caffeine is not a remedy for a significant lack of sleep.

“If you’re sleepy and you want to feel, at least, a little bit more alert, a little bit of caffeine can help with that perception and in some cases can improve cognitive performance,” Zoccola said. “But it doesn’t overcome severe sleep deprivation.”

Everyone reacts to caffeine differently, and for some people, it can make it difficult to fall asleep at night if they drink caffeine late in the day. If a person has insomnia, avoiding caffeine after lunchtime can help them fall asleep.

According to a 2008 study from the University of Kentucky, more than 78 percent of college freshmen at Marshall University consumed more than 200 mg of caffeine per day. Drinking too much caffeine over long periods of time can cause significant physical problems such as heart palpitations and tremors.

After a long night of drinking, many people can’t wait to get home, eat a Big Mamma’s burrito and hit the hay. However, if they had too much to drink, they will not be getting the restorative sleep their body needs.

Alcohol decreases REM sleep, which is when the brain becomes more active about 90 minutes after falling asleep. Alcohol also increases the amount of time it takes to get to a person’s first REM cycle. Drinking so much that someone “blacks out” is not the same thing as sleeping and it disrupts restorative sleep a person needs each night.

Many people who go to sleep after drinking experience early morning awakening, which is when a person wakes up much earlier than they usually do and has trouble falling back asleep because of the way alcohol affects the brain and “disrupts the architecture of sleep,” Zoccola said.

Ultimately, many students consider catching up on sleep or sleeping responsibly second-best to a social life. “Students would rather be out partying on than sleeping,” Miller said.

Stage 2: fairly light stage sleep; brain waves slow down; a person should wake up from a power name after this stage

Stage 3 and 4: beginning of deep sleep; body becomes less responsive to outside stimuli; this is the restorative stage of sleep

Crashing on the couch

Cassie Gibson is the kind of person who can’t sleep in a bed other than her own. It throws off her routine if she does.

“Sleeping in the same place is part of the reason why I can’t nap in random places,” Gibson said. If the place she sleeps at doesn’t reflect her bedroom, dark and quiet, then she knows she will have a restless night.

Situational insomnia is when a person cannot get into a good deep sleep if they are in an unusual place. Some people are less sensitive to the environment in which they sleep, but it can decrease the quality of their sleep if they aren’t in their own bed each night.

“It can throw off your sleep cycle because your brain is very entrained to sleep in that bedroom that you have taught it to sleep in,” Borchers said.

When Sophie Keeper goes to bed in her dorm room, she never falls asleep right away. Her average bedtime is 1 a.m. and even at that hour, her mind doesn’t shut off. An hour after she’s in bed, she typically turns on her side and checks her phone. Thirty minutes later, she gives up and turns on Netflix to try and lull her to sleep.

Consistent sleep is difficult for Keeper, but napping is a different story.

“I can nap anywhere, anytime any day,” she said. Her friends even note that she sleeps on their futon more than they do.

Naps can be useful if a person is sleeping for 30 minutes or less, also known as a “power nap,” Zoccola said. If a person naps for much longer than that, it will throw off their sleep cycle and cause insomnia. Most doctors prefer patients to get the majority of their sleep in one block at night, Borchers said.

Staying up all night to study for prolonged periods of time will not actually help students looking to cram for an exam or trying to get assignments done. Sleep deprivation, even short term, can lead to cognitive problems such as impaired judgment and decision making, loss of memory and inability to concentrate.

“Before an exam is not the time to stay up all night,” Zoccola said. “You need your sleep in order to be engaging in those cognitive activities.”

Gibson, a freshman studying biological sciences, incorporates her sleep schedule into her studies for health reasons. Gibson has 8 a.m. classes. If she stays up too late, then she knows she’s not going to retain anything in her classes, which includes a lot of memorization and application.

Even with her intensive studies, Gibson has never felt the need to pull an all-nighter. She can't speak for herself in the future, but it's an option she has wanted to avoid so far in her college career.

It is more beneficial for a person to get a full-night sleep before a big exam or presentation than trying to retain lots of information when their energy is low.

“(Students are) really hurting themselves when they do that,” Borchers said.

A definition has been clarified to reflect accurate information.