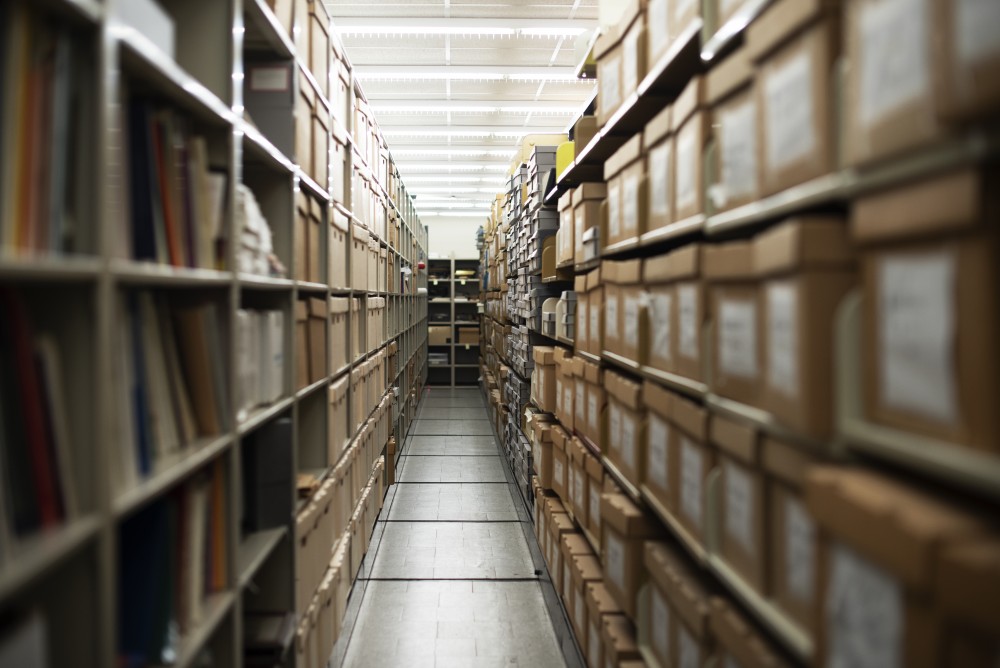 “When I first came in here, there was no inventory,” Kimok, university archivist and records manager, said. “I literally had to walk up and down aisles to try and find things on shelves.” 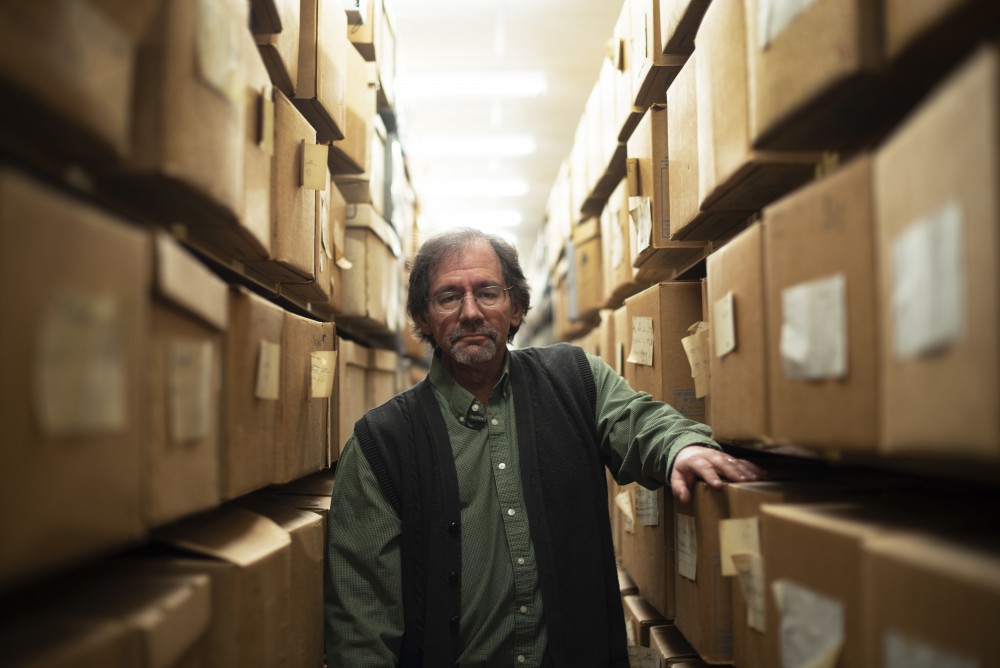 University Archivist and Records Manager, Bill Kimok poses for a portrait in one of the archive storage rooms in Alden Library.


The job of the archivist is to organize memorabilia so that they make sense, they can be used and they can be accessible.

“I am in charge of taking care of, organizing, accessing the corporate memory of Ohio University,” Kimok said.

The first step was to find out what history was lying inside the boxes and then organizing an archiving system.

Kimok is unsure of how the archives were started, but believes they began like a lot of archives.

“People have always been really good about saving stuff,” he said. “You probably have relatives that have garages and attics that are full of things that you can't even look around because there is so much stuff.”

About 75 to 80 percent of that 200 years of history has not been processed yet, Kimok said.

“The reason is that we continue to grow, as you can imagine,” he said. ”We are not like a dead museum where things stopped 100 years ago.”

With that continuation of growing, Kimok had to stop the archives from becoming a “dumping ground.”

“We are not like a dead museum where things stopped 100 years ago.”-Bill Kimok, university archivist and records manager

“Anybody would clean out their garage or their attic and find things, they would just bring it in and the people who were here before me would just accept it and not really question it,” Kimok said.

To put a stop to this, all donations have to demonstrate an intrinsic historical value and donors have to complete a donor agreement.

“In other words, when you give us this stuff, we become the owners,” Kimok said. “We're not just storing material for you. We are the owners of it. And you also give us the right to digitize it, make it public, do whatever we want with it.”

Retrieving from the shelves 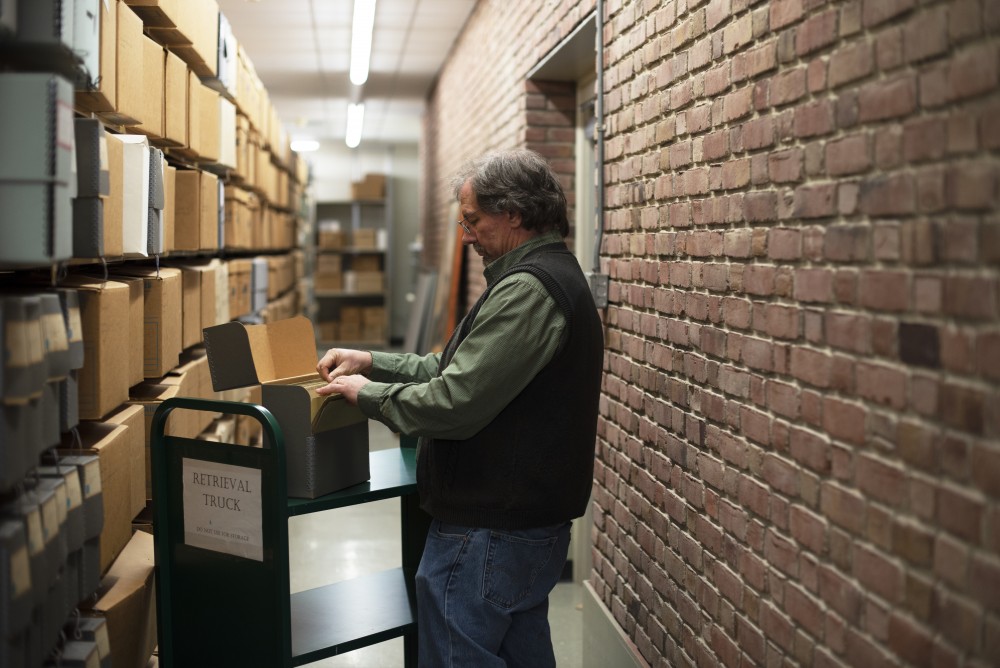 University Archivist and Records Manager Bill Kimok retrieving documents from one of the archive storage rooms in Alden Library.

Within the Mahn Center, located on the fifth floor, there are different collections, Kimok said. There is the university archives, manuscript collections, rare books collections and other special collections.

Some examples of manuscript collections include the Cornelius Ryan Collection of World War II Papers which includes 3,072 files of individuals participating in battles during World War II and the E.W. Scripps Papers. The archives also have rare books that have been donated, including a handwritten bible with cold inscriptions dating back to the 13th century.

There is also an additional annex for the archives located on Columbus Road, Kimok said. Storage of library books that are not used as often as well as university records, such as transcripts, are stored there.

“We have lots of stuff,” Kimok said. “The range is almost immeasurable.”

Hannah Reynolds sits in the Reading Room on the fifth floor of the library during her shift and sifts through box five of 12 of her current project of processing a collection containing items from OU’s English Professor Samuel Crowl. 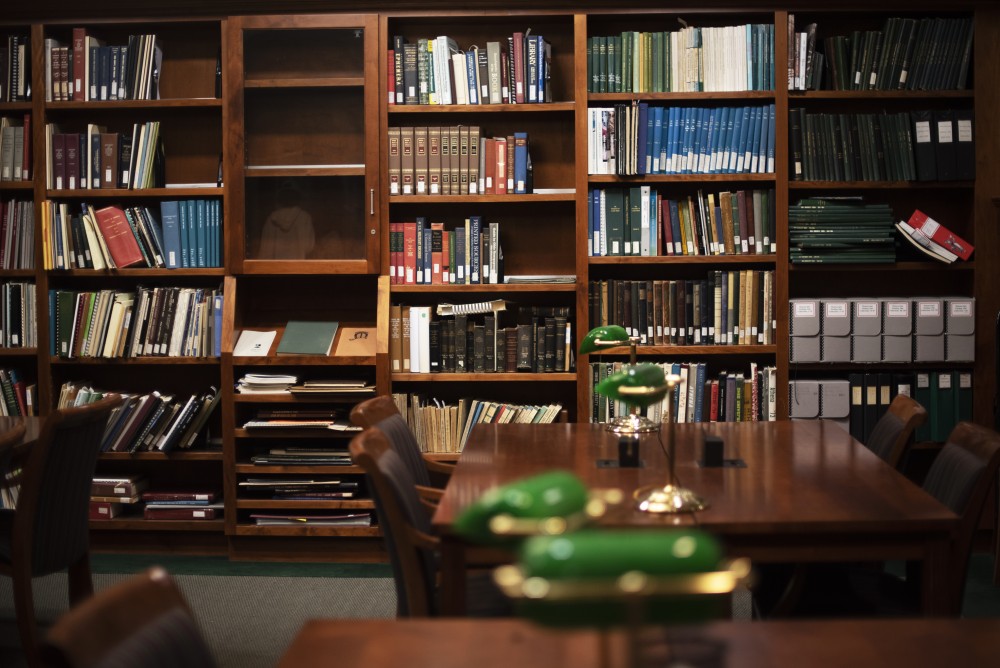 The Reading Room within the Mahn Center located in Alden Library on the 5th floor.


Reynolds, an assistant archivist and a senior studying art history, starts the day by getting a box of donated materials, taking out those materials and organizing them.

“... I have to go through this and I have to organize it in whatever way I think would be best for a researcher,” Reynolds said. “So let’s say you want to come in and look at this one day, I would hope the way that I did it would make sense to you.”

After college, Reynolds wants to obtain her masters in library science with a concentration in archiving.

“I knew I always wanted to work in a museum and that was the major goal,” she said. “So, I was looking at jobs where I could handle collections and I found archiving to be somewhat interesting.”

While being the university archivist and records manager, Kimok also teaches a course called the Mastering the University Experience and tries to encourage his students to go out and use the archives, such as the microfilms on the first floor of Alden Library. These films contain newspapers, catalogs and other documents. 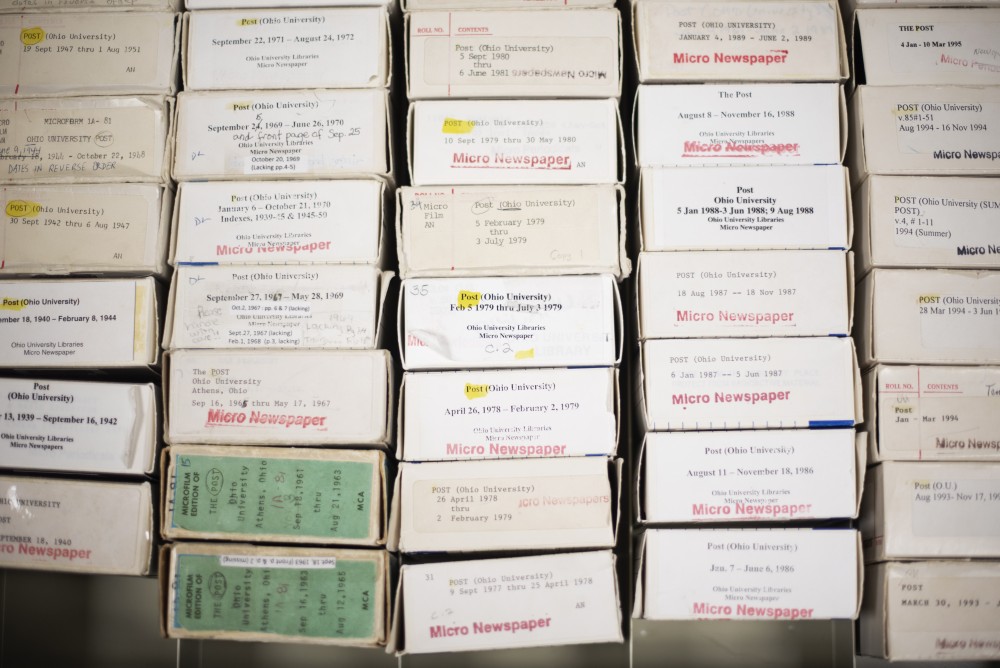 Microfilms are stored on the 1st floor of Alden Library.

“So, I give them a chance to earn 30 bonus points, which is a lot, if they go down to microfilm and learn how to use the microfilm,” Kimok said.

Working with students and teaching them fuels Kimok’s passion of being an archivist, he said.

“Using what I know and using materials from our collections to teach people, to teach undergraduates,” he said.” Without the teaching, it would be a very boring job.”

When it comes to doing research for an essay or class project, Kimok said the archives allows students to become the master of the material that they find.

“If you don't want to do the same old life and times of Abraham Lincoln in three pages that you've done all your life by looking at an encyclopedia, this is the place to come,” Kimok said. “The people you are going to be writing to or speaking to have not seen this material so you become the master of it and it's your interpretation which is more valid than people who haven't seen it or are looking at it second hand.”

And for some, he said, it wakes up this sort of “intellection.”

Janet Carleton, the digital initiatives coordinator, spends most of her days in Alden 333 in the dark, the only illumination coming from desk lamps and computer monitors.

Carleton, who has worked at Alden Library for 20 years, was also a student worker in the archives during her time at OU.

Her team works to digitize newspapers, photos, catalogs, yearbooks and more so that they are available for viewing online, which also happens to be her favorite part of the job.

“That's been my whole professional career,” she said. “It's what I've been doing since I got out of library school in 1995.”

Carleton also helps people who are seeking something particular in the archives.

“I’ll see if I already have them digitally or not and we generally tend to offer things already digitized,” she said. “We just have a fraction of the stuff digitized because it's very labor intensive, not only do you have to capture it properly, color correct, make everything look the way it is, then you have to describe it really well because if you don't know, nobody can find it so what's the sense of doing it?”

Looking to the future

As the archives start to veer in a more digital direction, there is the issue of space and funding to increase the capacity to hold digitized documents.

Space is filling up, Carleton said. Right now negotiations are happening with OU’s Office of Technology to increase that space.

“We have quite a bit of space now but it's just not enough,” she said. “So, that is bit of an issue so we are trying to figure out how we can work with OIT or even if we have to outsource it to some cloud vendor or something.”

While Carleton and her colleagues are working with OIT, there is a worry that the space they currently have is starting to fill up.

“I am worried that it impacts our daily work, because generally people work on their local computer and at the end of their shift they copy their files over to the file server where everybody can get to them and ... they find that there is no room, so that's problematic,” she said.

Not only does this affect the digital department but Reynolds is worried because she might not be able to obtain an experience she knows will help her in her future career.

“That's going to be like one of my main focuses when I go to grad school is digital,” Reynolds said. “And if I have that experience and maybe an older colleague of mine doesn't, I'm going to be more marketable in that way.”

Regardless of the digital side of the archives, Kimok continues to organize and archive OU’s history.