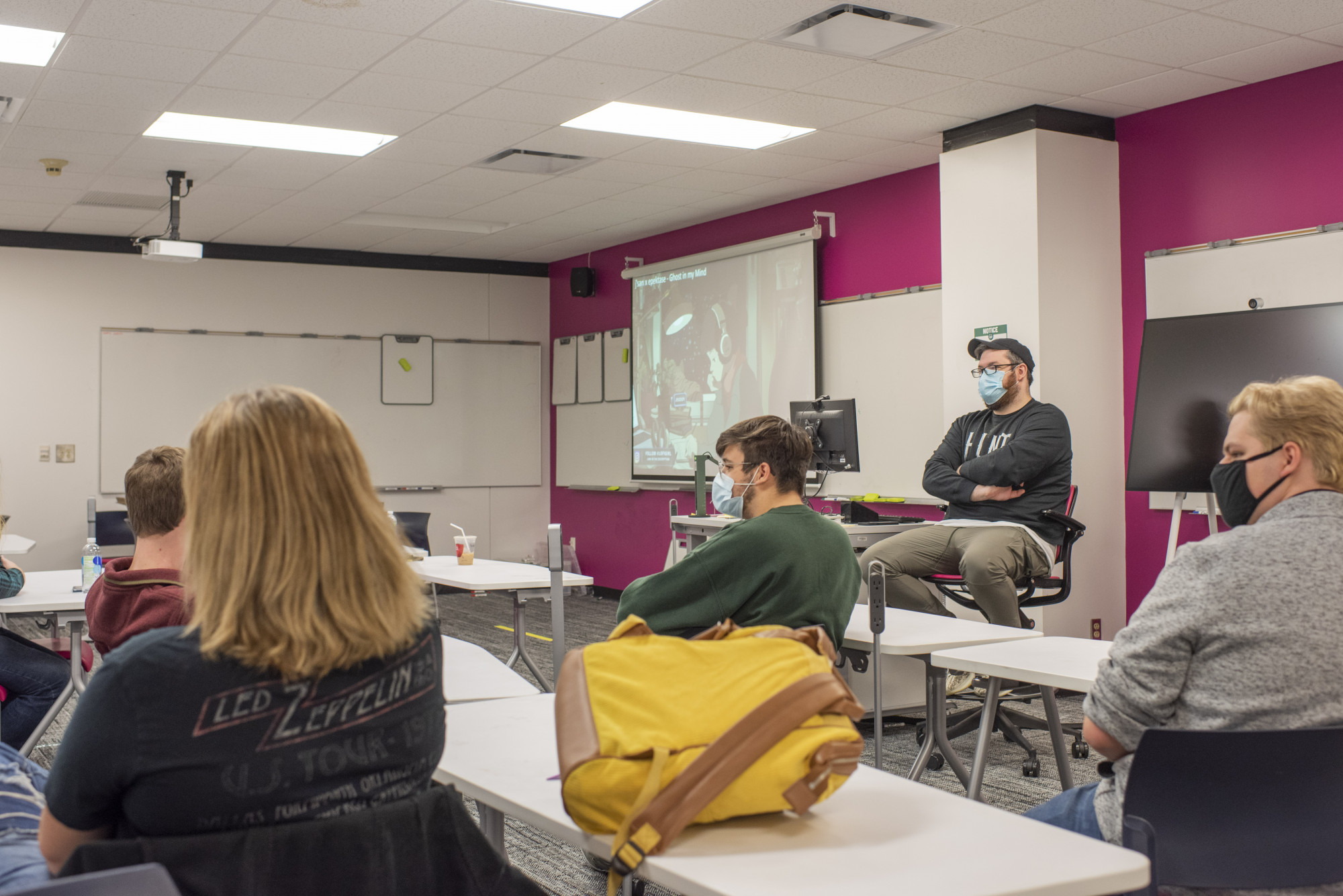 Bobcat Esports held their admin meeting in the CoLab on the third floor of Alden. Made up of presidents from other gaming clubs on campus.

Not everyone is interested in esports just for the games.

Some might be interested in competitive gaming, but others might find an open space for career development, regardless of their major. Esports is multiplayer video games played at the competitive level, and it’s growing in popularity all over the world.

When Bobcat Esports was formed as a club in 2017, its founders weren’t just focused on recruiting the best players they could find. The program needed students who work in management, social media, technical support, broadcasting and other fields to get the program fully running.

That’s one thing those involved with Bobcat Esports wants everyone to know: Even if a student is not competitive, or even if they don’t have a strong aptitude for gaming, the club is still open to them.

One of the founders of Bobcat Esports, Kristofer Meyeres, a 2020 alum and continued Esports advisor at OU, said that often his long-time passion for video games was not understood by people around him. Many didn’t see the same potential value in the medium as he did, and the stigma around video games didn’t help either.

“There’s always a stereotype that video gamers were just an outcast of society and that you can’t interact with them,” Meyeres said. “I really wanted to focus on breaking that stigma and then also showcasing how much really is behind esports and video games.”

Meyeres believes that Bobcat Esports began to grow a social presence at Ohio University after the club formed and hosted events. People who played games were no longer being viewed as outcasts playing in the corner of lobbies, Meyeres said. Along with the industry becoming more popular inside and outside of Athens, people recognized the leadership of students involved with Bobcat Esports, its partnerships with OU and the growing membership of the club. Even professors and faculty began to notice and recognized Meyeres as a part of the organization when he was in the classroom.

Bobcat Esports became an integral part of student life for many members of the club. With its arms outstretched and welcoming, people continued to join during the COVID-19 pandemic.

Kylie Jung, a graduate student in the industrial systems engineering program, was part of Shawnee State University’s esports program. After her time at SSU, she wanted a graduate school that could offer her a similar gaming environment. She asked her coach if OU had anything to offer, and she got in contact with Bobcat Esports before her first semester even started.

Right after Jung signed her lease, OU announced that most courses would be online for the following semester. Jung’s start in Athens could have been lonely, but fortunately, she already had connections.

“The only way that I actually got to know people at OU was through Bobcat Esports,” Jung said. “I’m friends with them today, and we hang out and everything, and it’s fantastic. But if I didn’t have Bobcat Esports for that, I don’t really know where I’d be because everything was online.”

Jung appreciates the competitive culture on the Bobcat Esports’ equivalent of a varsity Overwatch team she is on. However, not everyone has to love competition to be a part of Bobcat Esports.

Katie Schmidt, a senior in the music production program, felt welcome by the club as a freshman in 2018. He had never seriously considered playing video games competitively until he played a few rounds of Super Smash Bros. Melee and talked with club members at the student involvement fair.

“I didn’t really play any super competitive matches,” Schmidt said. “I just played more casually and stuff. But the community is really welcoming in that if you are just a casual player, you aren’t going to be excluded from the space.”

From there, Schmidt started on the club’s Overwatch team, became social media manager, then program director and now sits as vice president. He wants others who might be unsure if they will feel accepted in Bobcat Esports to know that there’s a space open for them.

“As a member of the LGBT community as in the role of vice president, a lot of what I do is just help other people feel included,” Schmidt said. “If somebody isn’t sure about joining a team or isn’t sure about where they can fit in, I can talk to them if they want to talk … We have a lot of different people, non-binary, identify as man, identify as a woman, a lot of people from different backgrounds, gender, sexuality, race, all sorts of settings that just come and play games.”

Schmidt also credits Bobcat Esports in helping him learn how to compose himself on a professional level. He attends board meetings, works with investors and helps with the creation of the upcoming new esports facility.

Bobcat Esports is made up of students from a variety of majors, with many finding ways to implement their studies into the club. Pat Daley, a junior studying integrated media and the current president of Bobcat Esports, has a dream job of working in player support and helping set organizations up for success by making them aware of their best and worst practices. He saw potential in the program when he arrived at OU and set a goal in obtaining a leadership position.

Those who came before Daley, like Meyeres and Ivy O'Shaughnessy, another founder, gave him the opportunity to climb up the ladder to higher positions. By the time he was president, he was well-prepared and excited for his role. He had been with Bobcat Esports a long time, established himself as a leader, knew the program, loved the program and wanted to see it succeed.

Along with positions within the programs, current and former members of Bobcat Esports have found job opportunities in the esports industry. Max Sauber, a junior studying engineering, is Bobcat Esports’ primary esports caster, where he runs streams, gives analysis, play-by-play and interacts with the streaming chat. He’s received independent casting contracts through connections he’s made through the club. When the new esports facility is complete, the broadcasting booth will be based on a professional setup, which Sauber hopes will help train himself and others in the field.

When it comes to working in front of or behind a camera, moving the ethernet cables to make sure everything is plugged in correctly or making sure that all the cameras are giving the right signals, trained talent isn’t always easy to find.

“We are creating an ecosystem where we can build that and train people on professional grade equipment as a student,” Sauber said. 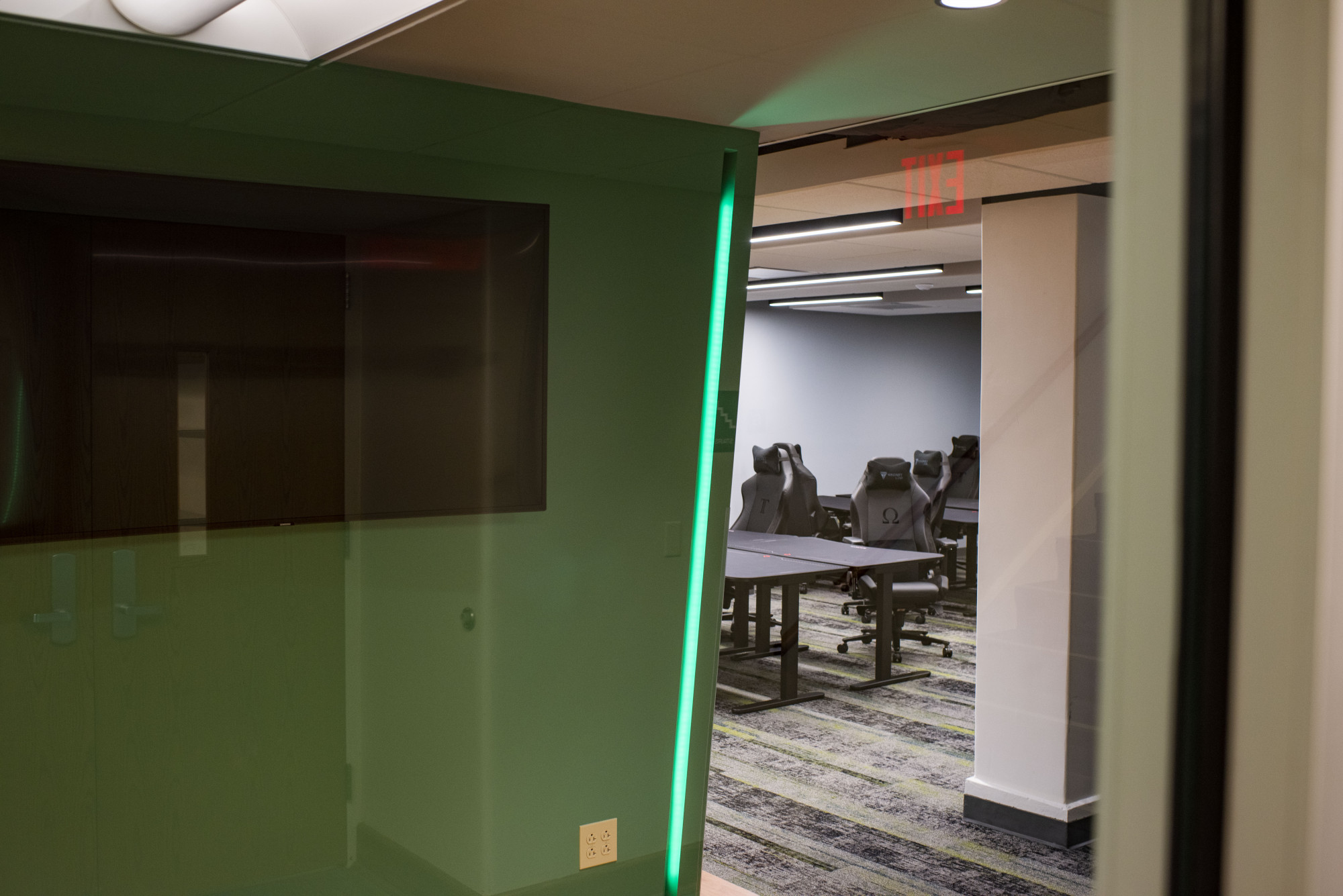 Esports lab in Scripps Hall that is still waiting on computers to arrive to be completed.

The new facility, which will be located in Scripps Hall, was approved by OU’s Board of Trustees with $650,000 of funding for the project in January 2020, according to a previous Post report. After a delayed opening due a global computer chip shortage, the facility is planned to open in Spring Semester 2022, as stated in a previously in The Post.

Lemar Daniels, a former director of operations for Bobcat Esports and OU alum, is now the esports coordinator at Lourdes University. Working with esports allowed Daniels, someone with a background in traditional sports, to see how such programs are run at a club level and how that can benefit students.

Many esports programs in the U.S. are still clubs, but even varsity programs, such as Lourdes’, give students opportunities in leadership and their fields of interest. Daniels said not only does this give students good experience while they’re still in college, but being student-run also benefits the program at other levels.

“It keeps just the entire team engaged,” Daniels said. “It gives everybody different things to be able to work toward, too. Maybe you’re not getting a lot of play time, but you do a lot with our production, or you do a lot with our fundraising. It gives them more opportunities to still get involved.”

Daniels and other alumni of Bobcat Esports are first hand examples of students graduating and going into jobs in the industry. Ivy O’Shaughnessy, one of the club’s founders, works as the associate client operations manager at Esports Engine, an esports events and solutions company.

“The reality of it is there’s so many cogs kind of turning behind the scenes as far as what needs to happen to kind of make an event go off,” O’Shaughnessy said. “My communications major was super helpful in giving me a prerequisite idea of what this industry needs, especially since esports itself has started to just grow rapidly within the past few years.”

O’Shaughnessy feels confident that no matter what someone’s major is, esports has a place for them.

Many OU alumni, including those who graduated prior to the founding of Bobcat Esports, have gone on to make a name for themselves in the industry and even work at executive levels. Jeff Kuhn, the esports director at OU, wants students to have the skills necessary to join those alumni in the young but growing industry, doing so through Bobcat Esports and their education.

“Now what we’re doing is connecting with those graduates and saying, ‘you’ve got the industry experience in this brand new field. What would our students need to get hired by you?’” Kuhn said. “There are no established precedents for this. So, we’ve got this free rein to create with the only goal of making sure our students are ready for careers.”

Esports is a growing industry both in terms of revenue and popularity. Tournaments such as the 2021 League of Legends World Championships receive viewership in the millions, and with such high viewership brings high revenue.

The money is there in the industry, and so are the jobs. To Kuhn, this focus beyond just competition is also what creates a more welcoming, healthy environment.

Starting students off in a positive environment could go on to change the video game industry as a whole, Kuhn said. The industry still has its problems. Companies such as Activision Blizzard and Paradox Interactive have received accusations of gender-related harassment or abuse as recently as 2021. Making sure the esports space at OU is welcoming to all has been a top priority for everyone involved in the club, including Kuhn.

With open doors to explore different career paths, Kuhn hopes students will take values of inclusivity from Bobcat Esports and OU into the industry post-graduation.

“I do passionately believe that college can help fix the industry,” Kuhn said. “But until we recognize games and recognize the industry our kids are going into and help shape and let them develop these values, we’re not going to get that fixed.”