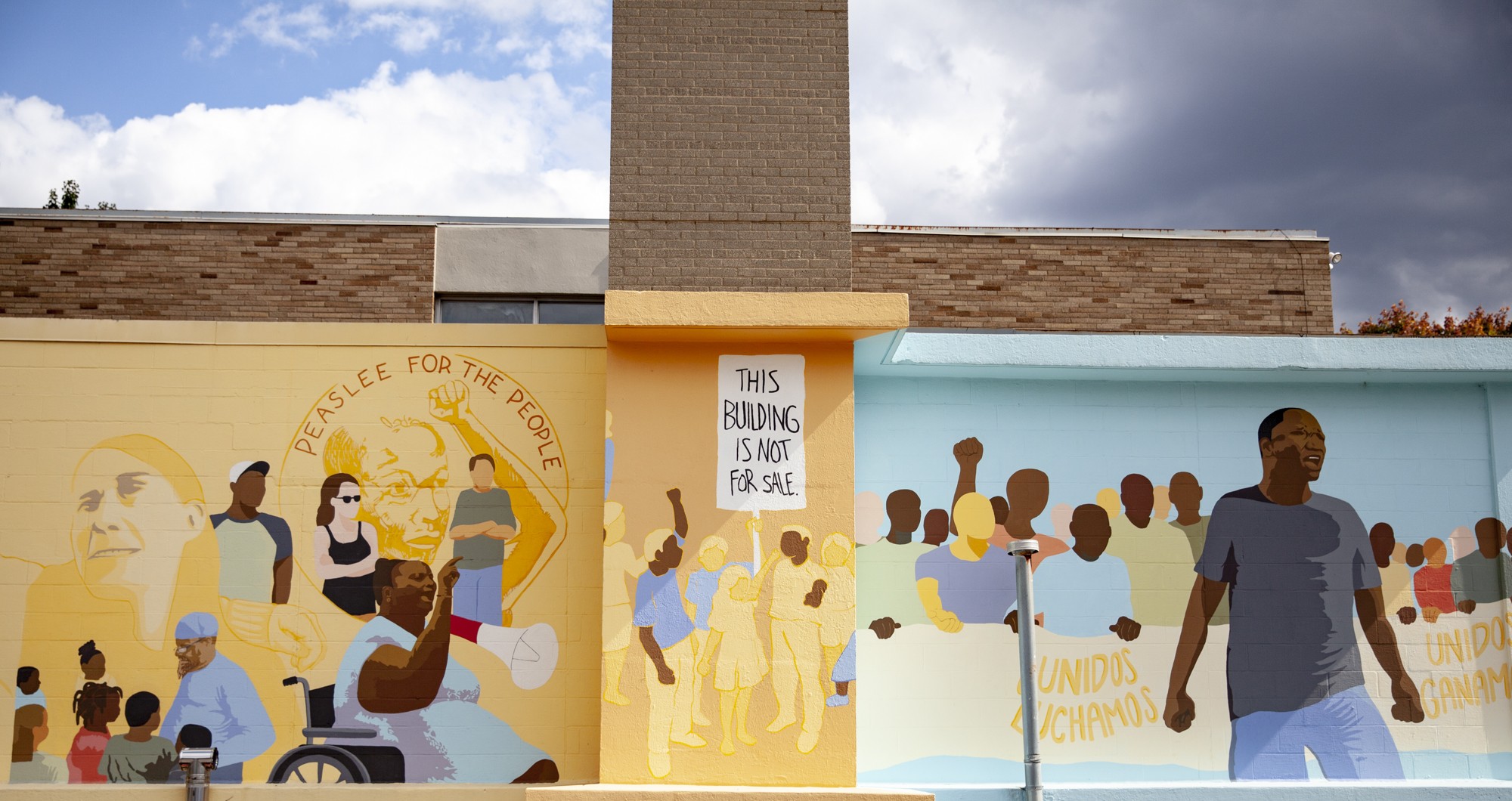 The Peaslee Community Center in Pendleton, Cincinnati, OH is home of multiple arts and community projects, including this mural.

The Art of Activism

Ohio Black Lives Matter artists use murals, other work to propel the movement

I n the wake of George Floyd’s death, people have been in a state of unrest.

On May 25, Floyd was murdered by police officers. What followed was a flare of support for the Black Lives Matter movement, which began back in July 2013 after Trayvon Martin’s killer was acquitted, and has continued for years, demanding justice for Black lives by condemning police brutality.

There have been protests, looting, news reports and more media surrounding the movement than one can count. Activists who support the movement, no matter the race, are finding avenues to make a statement.

One way activists have been showing their support is through artwork. In cities like Cleveland, Columbus and Cincinnati, activists are furthering the Black Lives Matter movement alongside protests.

In Cleveland, artists designed a 200-foot Black Lives Matter mural on East 93rd Street and Bessemer Avenue on the east side.

Each individual letter had messages of hope and unity as well as calls to justice and tributes to the lives lost from police brutality.

The mural is the only Black Lives Matter street mural in the greater Cleveland area and was put together by two nonprofit organizations: Random Acts of Kindness Everywhere and Graffiti Heart Gallery.

Stamy Paul, president and founder of Graffiti Heart, reached out to city officials to organize a similar street mural to the one in Washington, D.C. There were several roadblocks, so they looked into creating a rooftop mural or even a parking lot mural. The city finally reached out and selected a street it would sponsor.

“We were like, 'tell us how to help; let us be allies,' looking for any opportunity.”-Jen Rubles

Random Acts of Kindness Everywhere founder Ricky Smith met with Paul in the middle of June to collaborate and create the basic plan of the mural, and just three days later, the police had blocked off the street for them to begin working. Half of the painting materials were donated from Sherwin Williams, which also delivered the paint to the site. Volunteers, artists and other groups came together to individually illustrate each of the letters based on their different visions.

Paul believes East 93rd Street near Bessemer Avenue is a great location for the mural because of the history of tragic occurrences in the area with missing and murdered women.

“It’s an area that had been somewhat forgotten, and I think having the mural there not only brought attention to that street and that neighborhood, but it’s also a surprise for the community that lives and works there,” Paul said. “Unlike many of the Black Lives Matter street murals that have happened in the metro areas downtown, there were some that criticized the location. But all in all, I think it was meant to be there.”

The artists unveiled the mural June 20, and the city closed the area to traffic until July 6 so people could visit the mural. 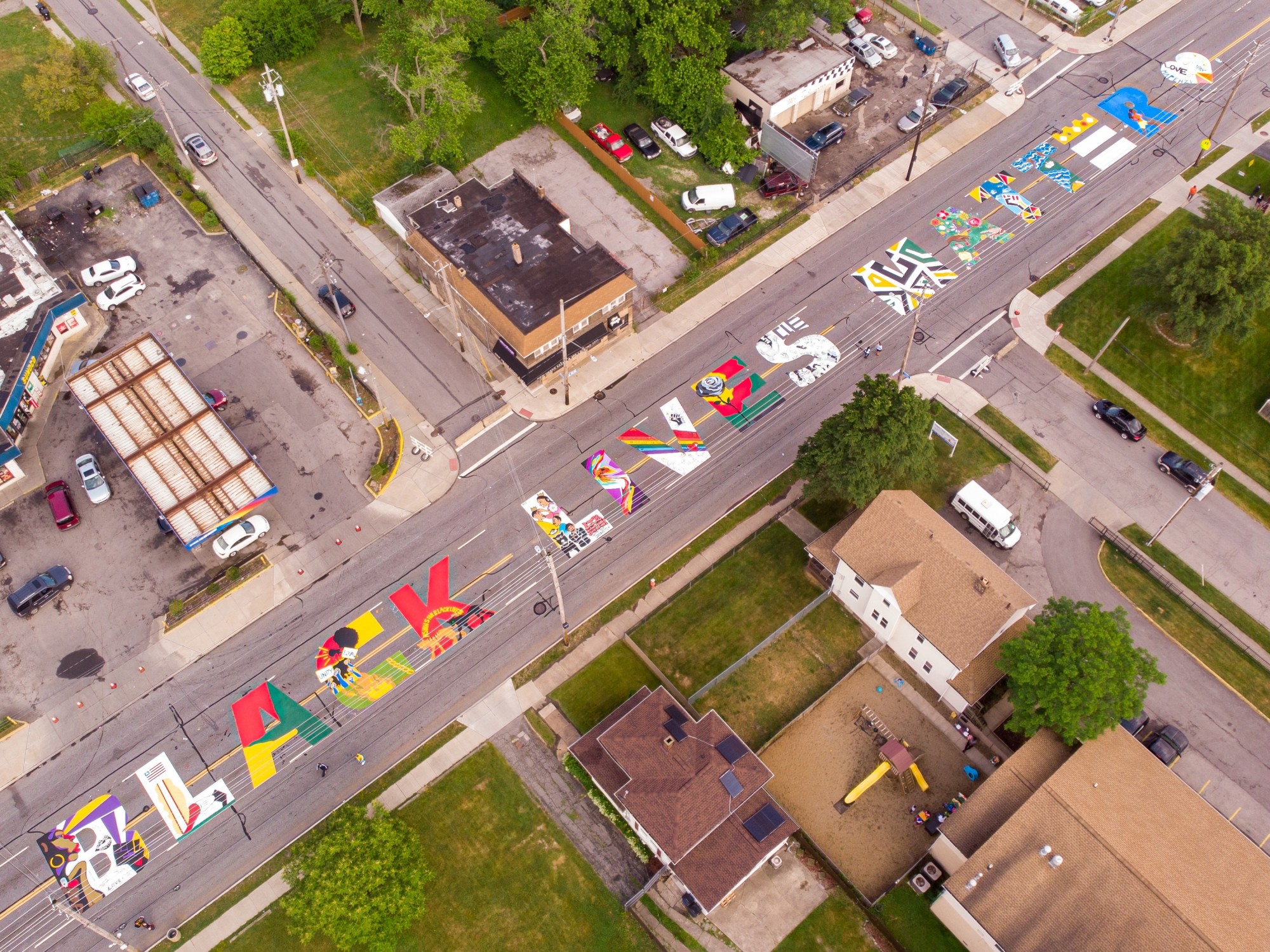 Since the mural’s unveiling, and even through its vandalization shortly after, Paul has seen a lot of positive engagement. She also watched the experience of creating the mural spark joy and form connections among the collaborating artists. A lot of them didn’t just stop at the street mural. Paul facilitated an Underground Railroad mural in Bedford with some of the artists from the street mural project.

“This mural in particular allowed for 100 different hands and minds to come up with multiple messages,” Paul said. “With the 16 letters, you had 16 different interpretations and outlets for the artists to illustrate their message and their interpretation of Black Lives Matter.”

In Columbus, the Greater Columbus Arts Council, or GCAC, worked with the Columbus Association for the Performing Arts, or CAPA, to demonstrate how art can heal by launching the #ArtUnitesCbus campaign.

Artists in the Columbus area are painting boarded-up storefronts on Long Street and even the Ohio Theatre.

Jen Rubles, a Columbus artist and owner of Pattycake Bakery, was contacted by the Ohio Theatre to create a mural for the building. The windows had been smashed in and boarded up, so the Ohio Theatre staff was looking for something to cover the space.

Rubles and some of her friends secured the opportunity to create a mural at the Ohio Theatre, across from the Ohio Statehouse. Keeping with the theater theme, they chose to portray a quote from the musical Les Miserables because it seemed appropriate, being a play about oppression and people fighting to use their voice.

Even the darkest night will end and the sun will rise. - Les Misérables by Victor Hugo⁣ ⁣ Today I met up with @adambrouilette, @wearefinite, and @lisamclymont to knock out a single day mural on the boarded up Ohio Theatre.⁣ ⁣ Where I feel strongest is when I can use my voice to bring uplifting support to those who are on the front lines. Rise up, my friends, and know that I love you and know that you are so very brave and strong. ⁣ ⁣ #blacklivesmatter #nojusticenopeace #artunitescbus

“We were like, ‘Tell us how to help; let us be allies,’ looking for any opportunity,” Rubles said.

Christopher Moss has been working with GCAC for about seven years and was eager to help out with the project.

“I really like celebrating Black culture and BLM, so for me, I find it to be very therapeutic,” Moss said. “I try to get that across to other people who also suffer from the same kind of oppression, racism, those things.”

His mural had a yellow background with blue lettering that read “Empathy,” and on top of the word was a symbol of a Black Power fist holding up a peace sign.

The symbol was created by Hakim Callwood, another artist on the project. Callwood also did several other murals during this time, with the list going on and on. Namely, Callwood created murals for places like Paradise Garage on High Street as well as Kaufman Development. He also did a mural for The Crew, Columbus’ professional soccer club.

“It was a very emotional time, and my art is typically more subtle about things like that,” Callwood said. “But when this came up, it felt like a good time for me to take a chance. I really did a lot of soul searching for each of my murals on how I can be honest to myself and how I can say the message that the business wants to say … and something that the audience will like. So I was torn in multiple directions.”

Most of the murals, however, are pulled now that the businesses have begun to open back up. All of the paintings from GCAC are residing at 400 W. Rich St., a place that showcases local Columbus work.

Though the GCAC and the Ohio Theatre were responsible for the outcome of several murals, more have made their way through the Columbus area. Some represent the concept of equality while others pay tribute to lives lost. 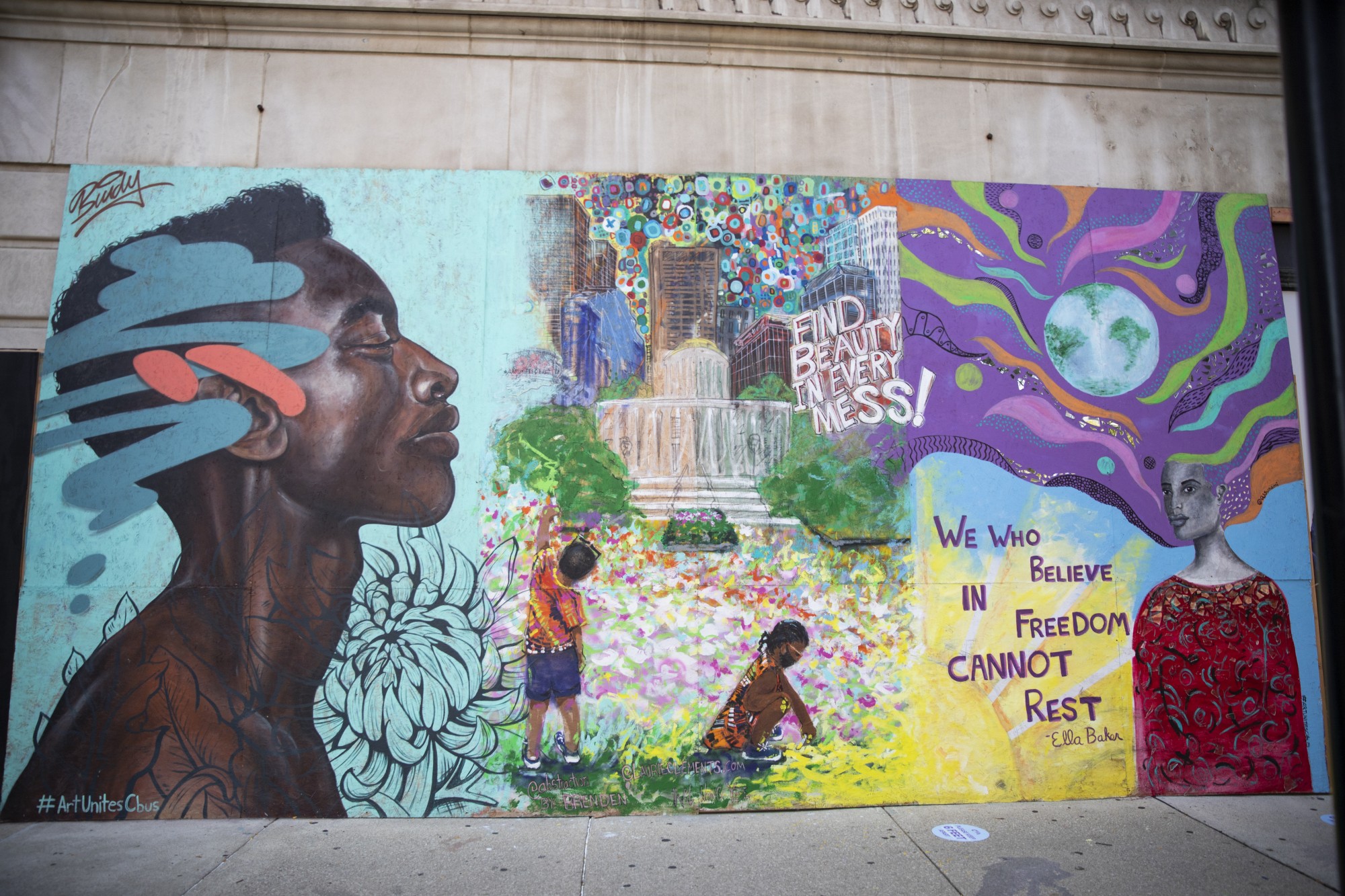 A Black Lives Matter mural near the Ohio Theatre in Columbus, Ohio.

We Will Not Be Silenced (Cincinnati)

In Cincinnati, 17 project managers facilitated a group of 70 artists in designing and painting a Black Lives Matter mural downtown.

The painting adorns a full block on Plum Street, directly in front of City Hall. The word “Black” is painted with an overarching red theme, while “Lives” has mostly black paint, and “Matter” has a nature-esque green.

Unlike other art forms of the phrase, however, each letter tells its own story –– especially since each letter was created by different artists.

One artist involved in the mural’s creation is Michael Coppage.

Coppage doesn’t have a specific medium. The Cincinnati resident primarily uses painting, but he also dabbles in photography, embroidery, sculpture and more.

Coppage completed the “L” in the word “Black.” It’s a red, black and white simply graphic depicting a black fist rising into the air out of a pool of blood.

I was responsible for the letter “L” in BLACK. My letter represents the resistance we have towards the institutional barriers/norms that exist in contemporary America AND the resilience required to still navigate the societal pitfalls and still land on both feet. We’re African Americans. We’re Black. We’re #American+ . Believe that shit. 📸 @shaynartker @albertcesare . It wouldn’t have happened without the fam. Brent Billingsley, Floyd Grace, Kristin Vaughn, Jennifer Locke and Ryan Walker. Santtu Potticary even threw down a few minutes in crunch time.

“There’s a pluralistic happening that’s going on, and the depiction of that particular image that I think for me was really moving,” Coppage said.

After days of planning the mural and executing the artwork, the artists were able to unveil the mural.

This isn’t Coppage’s first go-around with activism for the Black community. He has been working to acknowledge and address topics like equity, inclusion, racism and white supremacy in his life and through his art for many years.

Which is why he wasn’t surprised when the mural was vandalized.

“There’s so many people who seem to be threatened by the phrase ‘Black Lives Matter,’” Coppage said. “The implication is, ‘If all lives matter, then Black lives matter, too.’ But there’s some people who are threatened by it or don’t agree with it, who see Black people as less deserving. So this came from more of a place of ignorance, just a lack of understanding.”

Coppage knows the mural gave much more to the people of Cincinnati and the movement as a whole than it took away. He feels the vandalism almost reignited the hype around the mural and created another opportunity for the artists to talk to the media and get the word out there.

“That guy inadvertently helped us in his attempt to try to silence us,” Coppage said. “So he was a collaborator, whether he recognized it or not.”

Although they know art always has the ability to be vandalized, Coppage, Paul, Rubles, Callwood and Moss all feel it’s such an important avenue to promote change and activism efforts.

“Art is less intimidating in person than I am,” Coppage said. “People are more likely to spend time and listen and remain curious. For me, it serves as a middleman, a safe place to start what are sometimes difficult conversations. But I think art in general appeals to different people for different reasons. I think painting, particularly, and the relationship people have with paintings is very intimate, so it psychologically creates a space that wouldn’t exist if I was using some other media.”

“That guy inadvertently helped us in his attempt to try to silence us. So he was a collaborator, whether he recognized it or not.”-Michael Coppage

All five of the artists feel art has always been the leading force of any movement, and it can make statements that just saying words or reading news stories can’t always accurately portray. More than anything, however, artwork gives them a platform to participate in this powerful movement.

“It’s a different role than protesting and actively being in a march, but for me, it’s like being a cheerleader or like a stagehand,” Rubles said. “You are putting support out there for the people doing even harder work, and any way that you can support that work, whether it’s through art or financially or anything, that support trickles down and up, and everything supports each other.”