'Don't Forget About Us'

Mike Straw came out to himself as bisexual at 38.

He came out to his wife, Deanna, as they were dating.

And on Dec. 7, 2015, he uploaded a video to YouTube and Facebook and came out to the world.

“Because I had plenty of support around me, and I got real positive responses from everybody, and if anyone didn’t accept it, it wasn’t going to be a problem for me because (I had the support of) the important people around me,” Straw said.

He said he did have some expectations of hostility, but he hasn’t really seen such feelings from people.

“It’s one of those things, like, once you kind of come out to yourself, you look back over your life and realize, ‘OK, it was kind of there the whole time,’ ” Straw, a 47-year-old web application programmer at Ohio University, said. “I was in a real conservative religious group for a while, so I chocked it up to the temptations. … And then once I opened up to, ‘This is not a bad thing … not (being) straight,’ I could think about it and look inside and see what I liked.”

Although more people identify as bisexual than gay or lesbian according to a 2011 Williams Institute study, there can still be a sense of bisexual erasure, delfin bautista, director of OU’s LGBT Center, said.

“Most folks sort of know what to do with gay and lesbian. A lot of folks don’t understand bisexuality,” bautista, who uses they/them pronouns and the lowercase spelling of their name, said.

In the past, bisexuality has been confined to a definition of only being attracted to men and women. However, the definition has broadened with time, which is not uncommon for sexualities, Catherine Euler, a women’s, gender and sexuality studies adjunct lecturer, said.

“What we think we can and can’t do, or who we think we should or shouldn’t desire — those things are very affected by the time and the culture (we live in),” Euler said. “(Ideas about sexuality and gender) change about every 10 years.”

“Most folks sort of know what to do with gay and lesbian. A lot of folks don’t understand bisexuality,”

A bisexual person might not be attracted to just men and women but could instead be attracted to traits such as masculinity and femininity or anything outside of the binary, bautista said.

“With time and as our understanding of sexuality and gender and sex has evolved, more and more people are understanding bisexuality to mean attracted to a person of one’s own gender and another gender — or more genders,” bautista said.

Straw said for himself, he’s “sexually attracted to multiple genders” and “straight as far as romance.”

However, Sam Haug, an LGBT Center student worker, uses the label “pansexual.” Pansexuality, according to a GLAAD article, means “being attracted to all gender identities, or attracted to people regardless of gender.”

“For me, the reason I didn’t pick a pansexual label as opposed to a bisexual label (is) I’m not just attracted to two genders, but I have different attractions to the different genders and different aspects,” Straw said. “Like, I like masculine aspects in men and feminine aspects in women, for lack of a better term.”

Haug, a junior studying wildlife and conservation biology and global studies — Asia, found a video by Laci Green, YouTube’s “Sex Plus” host, that helped to explain the term.

Haug has never personally identified as bisexual and likes the clear distinction between the two sexualities, preferring the openness the term “pansexual” brings.

Straw saw his world open up to what it means to be bisexual and how that can differ from person to person. As a part of an online forum, “Husbands Out to Their Wives,” Straw has found support in a community of people that are not all just like him. Mike Straw, a referee for the Women's Flat Track Derby Association, participates as a head referee at the Marietta Roller Rink on Oct 22, 2016. Straw is openly bisexual.

“We’re all kind of there for each other,” Straw said. “We kind of started talking about our own labels of ourselves. … There’s no defined thing.”

Straw said he also frequently communicated with his wife about understanding his identity.

“At first, (conversations) were difficult, a lot of tears, a lot of discussion. I had a lot of times where I had said, ‘I wish I could just take it back and just be straight and kind of cover it up and stuff,’ but she really kept coming back and saying ‘If you do that, you’re not being yourself. You’re not being true to who you are,’ ” Straw said. “I got lucky. She’s always been an ally since before I knew her.”

Straw said “it’s kind of a blessing and a curse” he can “hide in plain sight” with his marriage. Straight privilege, bautista said, can be when a bisexual person is in a relationship with someone of the opposite gender, and their relationship appears to be straight.

“The other pressure that bi folk have when it comes to coming out is there’s a misconception — as well as a dynamic — that they have the potential privilege to pass as heterosexual, depending on who they’re in a relationship with,” bautista said. “People judge them not just as an individual but (by) who they happen to be in a relationship with.”

Kate Estrop, co-president of the Bisexual Resource Center board of directors in Boston, said there is an expectation from hetereosexual people that bisexual people will want to have sex with everyone, but that’s not true. Haug said the same untrue misconception exists for people who are pansexual.

“Bisexual women are sexualized, definitely,” Estrop said. “The (stereotypical misconceptions are the) idea of making out with another girl in a bar with your boyfriend or ‘I’m only bisexual when I’m drunk.’ … On the other hand, bi men are (stereotypically) on the way to gay. They don’t get (to) exist. … Two men kissing is not hypersexualized but two women? Definitely.”

The Bisexual Resource Center provides “support to the bisexual community and (raises) public awareness about bisexuality and bisexual people” according to its website. It is also the “oldest nationally-focused bisexual organization in the U.S.” and includes other non-monosexual relationships, like pansexuality.

“The BRC has helped me a lot in deciding that there’s more opportunities than meets the eye in love and in attraction and romance,” Estrop said. “It makes me feel good being a part of an organization and multiple organizations that are trying to make a difference in this subsection of LGBT people who are still pretty invisible.”

Euler said she wants to see the conversation on bisexuality shift, because “the more stereotypes about different forms of sexualities that we can get rid of, the better off we’re going to be.”

“Hopefully it will matter less and less what you do with who in bed, in terms of who you are as a person,” Euler said. “Those identities don’t make up the whole of who we are. We don’t have to fit ourselves into every box that comes along.” 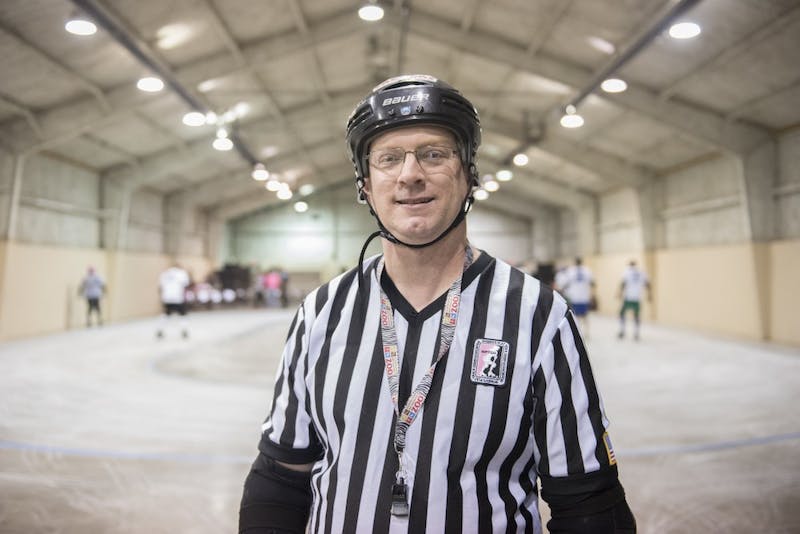 Straw, a referee for the Women's Flat Track Derby Association, poses for a portrait inside the Marietta Roller Rink.

Since coming out, Straw has been working on different projects to help create more visibility for bisexuality and other sexual minorities. He started a website, a YouTube channel and a Facebook page called “Intersections: Exploring the rich tapestry of gender, sexuality and relationships.” Straw looks to interview different people about their experiences.

Although being out as bisexual is fairly new to Straw, he’s now taking “every opportunity (he can) to share.”