The Haunting of the Twin City Opera House

An hour northeast of Athens sits an old building. It rests in the middle of the city of McConnelsville, casting eerie shadows over the square below. From its first days as an opera house, it has been a place of cultural events for the city.

The Twin City Opera House was built in 1892 and was meant to serve as a theater and government offices, such as the mayor’s. Today, it still serves the same purpose.

In 1879, there was a fire that burned down the northwest corner of McConnelsville. The area sat vacant for nearly 10 years, Adam Shriver, executive director of the opera house, said.

The city council decided they wanted to build something to function as a community center for government, entertainment and culture of the city. In the space that burned down, they decided to build the opera house.

Although it was originally built as a vaudeville house, a theater used for comedy and dance performances. Once silent films became popular in the 1930s, the opera house underwent a major renovation in 1936 to have full projection equipment.

“It’s kind of interesting, I think, because that would have been during the Depression and to make an investment like they did, they would have totally renovated (everything) and it was kind of a leap of faith to do that at its time,” Shriver said.

After about a year of working at the opera house, Shriver met Eric Glosser, a ghost hunter who came to go on a hunt at the building.

Glosser experienced so much paranormal activity from the building that he told Shriver he should consider making a business out of the paranormalities of the opera house. 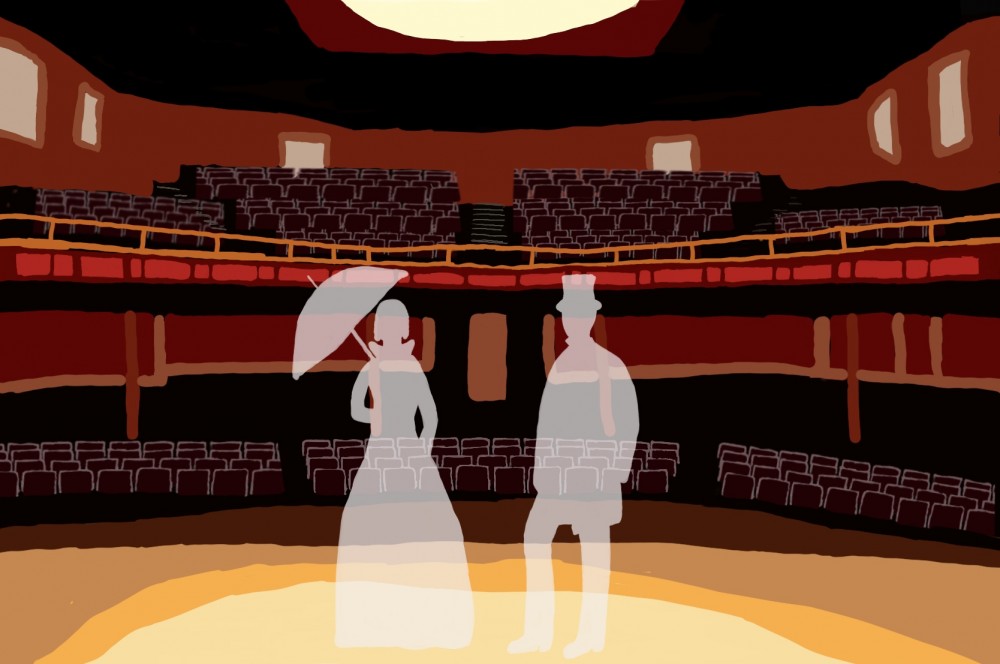 Glosser, who is a team member of the United Paranormal Project, now has handled the paranormal business for the opera house for about 12 years.

He’s always been fascinated with the paranormal, he said, and wanted to be a parapsychologist growing up. Glosser became a cop, but when he retired, he decided to join a ghost team.

He said that once shows like Ghost Hunters came on TV, it opened a door to talk about the supernatural.

“I did have a lot of things that happened when I was a police officer,” Glosser said. “Back then you didn’t go to the station and say you saw stuff happened.”

After Glosser retired, he joined a paranormal team. His leader was looking for places to go, and they came across Twin City Opera House.

The halls of the Twin City Opera House roam with various spirits, most of them friendly, Glosser said.

Robert Lowery, for example, lives in the catwalk. He was supposedly a stage hand during the 20th century. Glosser said after about a year of working at the opera house, he first met Robert. He asked the spirit if it could drop the temperature in the room, which it did from 80 degrees to 65 degrees, Glosser said.

At first Glosser said he didn’t know if he had captured a ghost, but when he was listening to his audio, he found a voice that sounded like a man who was half-drunk and said “I’ve got red wine.” Glosser nicknamed him Red Wine Robert.

“It’s really a strange thing because people who don’t believe in the paranormal think, ‘This guy’s wacky,’ but I have a friend that’s a ghost,” Glosser said.

This voice came through what Glosser said is an EVP, or electronic voice phenomenon. Someone may not hear the voice, but when they listen to the audio, it may come through. He has more than 5,000 EVPs.

“We have hundreds of hours of video of stuff that is paranormal that is not possible,” Glosser said.

There are two types of EVPs, Glosser said. Residual EVPs are like a “frozen section of time on repeat” where the spirit is unaware humans are there. Intelligent spirits are able to respond to humans and answer questions. He said most are intelligent.

Robert told Glosser there are 14 spirits living in the opera house. Glosser said he knows of 10 for sure, but doesn’t know all of their names yet. It’s taken him 12 years.

“It’s kind of a slow process,” Glosser said. “It’s not like we’re having a talk and I’m answering all of your questions. Sometimes you’re not getting as much information as others.”

He said the spirits are mostly friendly, but the opera house does have a darker side.

“We call it Charlie,” Glosser said. “We don’t know what Charlie is. We don’t know if it’s a demon, or an evil spirit. I always thought it was kind of demonic.”

The opera house has a basement, where the cast and crew would get ready for a performance. Below that is a sub-basement, which is nicknamed the black hole. A tunnel system runs underneath the opera house that goes throughout the town. Now, these tunnels remain unused. This is where Charlie is most often experienced.

“But when you get like TV shows that want to come in, the most fascinating spirit here is Robert, hands down,” Glosser said. “But they all want to lock on Charlie because he’s dark.”

Glosser said he’s had several encounters with Charlie, none pleasant. The worst came when a private team rented out the building and Glosser was giving them a tour.

“I’m over by the tunnel and talking about it. We’ve got weird stuff growling and stuff says “get the f--- out” and really creepy stuff and I’m standing there. I didn’t see anything, didn’t hear anything,” Glosser said. “Something invisible grabs my arms and moves me back like I’m a ragdoll. I’m a 300-pound man. My legs were not bending. They were straight. It was like defying gravity.”

It felt like an hour to Glosser, but it was only a few seconds. When he was a foot off the ground, it dropped him. Glosser said someone in the group said, “Dude! How did you do that?” but Glosser can’t explain it.

Charlie is known to target women, who will leave with scratches or light headedness. Glosser said he’s seen over a dozen women start throwing up in the basement.

“When he is present, there is a strong electrical charge,” Glosser said. “You’ll get the hair raised on your arm and you’ll get nauseous.”

Robert does not like Charlie, Glosser said. When Charlie is present, Robert told Glosser that Charlie is the one in control.

“I don’t know if I believe in portals or not, but according to Robert there are portals,” Glosser said. “He said the tunnel system is a portal that Charlie will travel through. There’s one in the catwalk that he goes through. Robert says he can open it and close it.”

Ouija boards are not allowed on the property as Glosser strictly does not allow it.

“You might use it 100 times and nothing will happen,” Glosser said. “All it takes is that one time and something comes through and if it’s demonic, it’s bad news.”

Demonic activity is typically viewed through a religious framework and paranormal activity could be perceived differently from person to person, Brian Collins said. Collins an OU professor of the global occult: ghosts, demonology, and the paranormal in the study of religion.

“Other people might experience it as a ghostly presence or an alien presence or something else entirely,” Collins said in an email. “In short, I am not willing to say what is real and what is not real. But I can confirm that a lot of people experience things like this, and I do not think that they are all lying.” 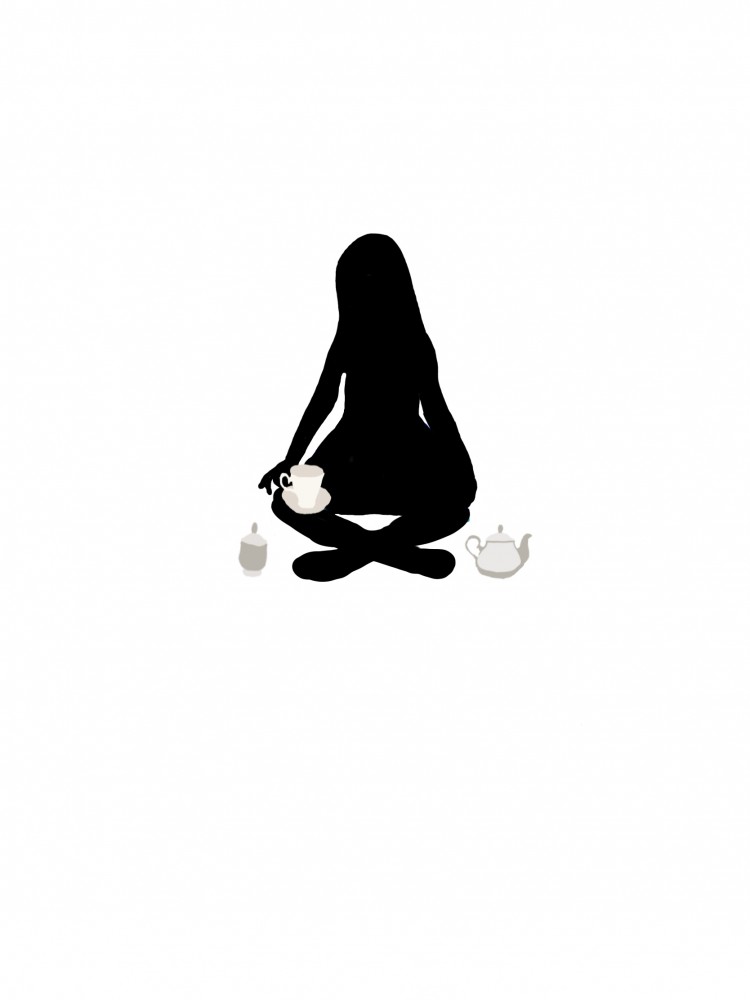 He said he’s pretty skeptical about things like demons and ghosts, but that doesn’t mean others are not.

Shriver said, however, he hasn’t seen much paranormal activity from the building, but more so weird occurrences like sounds or smells that are unexplainable.

“I’m there at weird hours of the night enough,” Shriver said. “I don’t have a lot of interest in seeing things or being exposed.”

Glosser said spirits can drain energy from electrical devices — phones, laptops, cameras, etc. — and there is nothing a living person can do. Some spirits do not like to be photographed or recorded and will purposely drain batteries or knock over cameras, Glosser said.

He said he’s had groups go other places in the opera house and come back to find their cameras face down on the floor and unplugged.

Elizabeth is a ten-year-old female spirit who also lives in the opera house, Glosser said. Her mom was a performer named Victoria.

“We wondered why Elizabeth was in the catwalk with Robert,” Glosser said. “Robert was married but not to Victoria. When she was here, they did some hanky panky and Elizabeth was the result.”

Elizabeth died to a heavy fever one night while her mom was performing. Glosser said he caught an EVP of a woman saying “I’m sorry! I’m sorry!” and he wondered if she was a performer or in distress. He later found out the woman was Elizabeth’s mom talking about being sorry for her death. Recently, he had an EVP of what sounded like Elizabeth saying “I forgive.”

“It was like everything, somehow in death they were separated and now they’re together,” Glosser said. “I have no idea. It’s beyond me.”

Glosser has been all over the country to some of America’s most haunted locations — Waverly Hills Sanatorium, Trans Allegheny Lunatic Asylum, the USS North Carolina — but he still can’t seem to understand why the Twin City Opera House is the most haunted of all of them.

“This place consistently has more activity than any of them,” Glosser said. “It’s just really crazy.”

Post reporters did not capture any EVPs through their audio devices. The reporter did, however, feel an unexplained tug on her arm while in the basement.