Honey from
the Hive

Keeping bees in a changing environment

A white-veiled man carrying a smoking box and what appears to be a crowbar approaches a wooden-layered stand and begins to meticulously separate the layers, like unraveling a Russian doll.

David Huffer checks on his bees almost weekly before spring officially starts. He’ll zip up his veil-vented jacket and start a smoking box that will calm and confuse his bees, making them less aggressive. He goes to inspect his hives, checking to see if they are healthy, if eggs are being laid and if they’re making enough honey. He’ll carefully pull up the honeycombed frames, packed with buzzing, vibrating creatures.

Six minutes away from downtown Marietta, David and his wife, Teresa, operate the Bee Barn of Southeast Ohio. Located at 450 Coffman Road, Marietta, the Bee Barn is a small bee supply store about the size of a one-door garage that sits in their gravel driveway next to their house.

David and Teresa have kept bees for seven years after being inspired by a road trip to Amish Country with a friend who kept bees. They talked about bees all throughout their journey there and back, and soon thereafter, they bought their first colony.

“We’ve always had an interest in the environment and ecology,” David said. “We, like everybody else, heard that the bees were in trouble.” 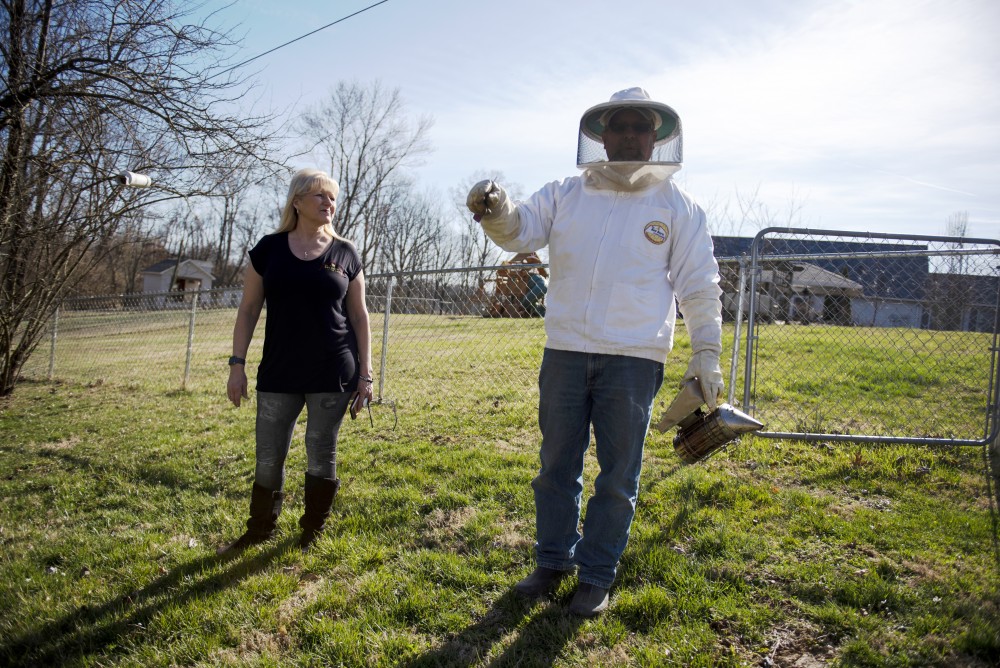 David and Teresa Huffer discuss the bees before opening up one of the bee boxes for inspection on March 27, 2019.

David, a retired criminal division lieutenant for the Washington County Sheriff’s Office, started building his own beekeeping equipment because the hobby is expensive to start. He began to make extra to sell and realized there was a demand for more equipment in the area after the only nearby supply store closed. Teresa, who retired from the Washington County Local Emergency Planning Committee, primarily runs the business side of the Bee Barn, while David puts together different hive stands and other beekeeping supplies.

Since opening their supply store three years ago, people have driven up to two hours to visit not only for the supplies, but for the expertise. Customers who are interested in potentially keeping bees want someone they can talk to and ask for advice, David said. Over the years, David and Teresa have found themselves mentoring new beekeepers. David’s phone seems to be constantly buzzing with photos from other beekeepers asking, “What’s that?”

In the winter, a beekeeper’s job is to make sure their bees have enough food to last until spring, to check the bees for any pests and to make sure the queen is still in the hive. The family loses a large portion of their colony each winter as forage options dissipate and disease spreads. Sometimes up to 43 percent of their honeybees die, David said.

“I tell everybody the two constants of beekeeping: You’re going to have bee colonies die, and you’re going to get stung,” David said. “That’s the constants.”

David, however, doesn’t get stung very often on the job. It’s mostly when he’s mowing or doing something else around the property. Beekeepers have gotten used to the stings — one even said mosquito bites seem worse.

“Bees know that they’re going to perish once they sting you, so it’s a last resort to protect their colony,” David said. 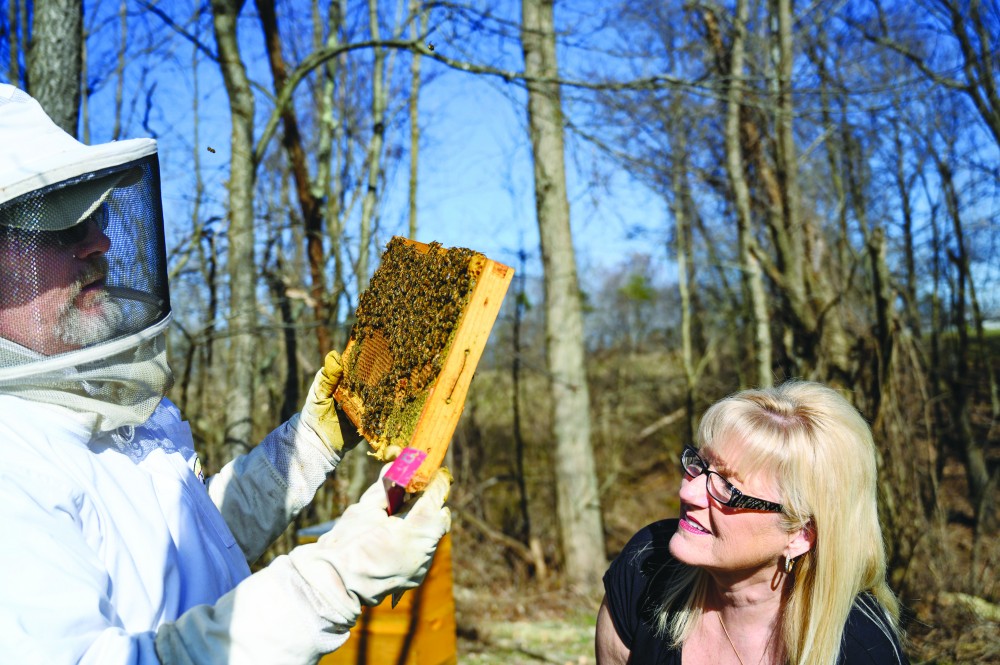 David and Teresa Huffer discuss the bees before opening up one of the bee boxes for inspection on March 27, 2019.

David will add supplemental feeding to the top of each hive to ensure that the bees make it to spring.

Early signs of spring start to appear in late March, as silver maple trees begin budding outside the Huffers’ house. But once the dandelions and the red maple leaves bloom in May, bees start to get busier — and so do David and Teresa.

Although the bees do most of the work collecting the honey, beekeeping is also very labor-intensive, David said. About twice a year, they lightly brush the bees off a frame and “uncap” the honey. Then they put it through an extractor, which spins the honey from the combs, and into a holding tank, where it is then sent through a filter and later bottled. Their honey sells for about $9, David said — more expensive than a regular grocery store’s “funny honey,” which is what he calls honey that is usually mixed with high fructose corn syrup.

As a beekeeper, David and his son-in-law occasionally collect bees that have swarmed around town and bring them back as “free bees.” Once, at a courthouse in Marietta, a woman’s car was covered in honeybees. David and his son-in-law brushed them into a box. The bees wouldn’t stay in the box, though. Someone had pushed the bees, including the queen, off the windshield with windshield wipers. The bees kept swarming to the car, thinking she was still there.

Honeybees follow the queen, and so do beekeepers to make sure their colonies are thriving and multiplying. The usual tasks of beekeeping has evolved, however, as the environment changes.

Crises in the colonies

Within the last few decades, keeping bees has become more difficult, said Parry Kietzman, an entomologist who works with the Appalachian Beekeeping Collective, a nonprofit organization that trains people to keep bees.

Dick Mullet, a beekeeper in Warsaw, said when he was a child, his grandpa raised bees and didn’t have to do anything. He would simply go to the hives and collect honey without putting in much effort. Now, everything is different.

“It’s challenging keeping them alive,” Mullet, a retired engineer who has been beekeeping since about 2004, said. “If you’re not right on top of it, you lose the bees. A lot of people (who) get into it don’t know what to do, and they whine when their bees die.” 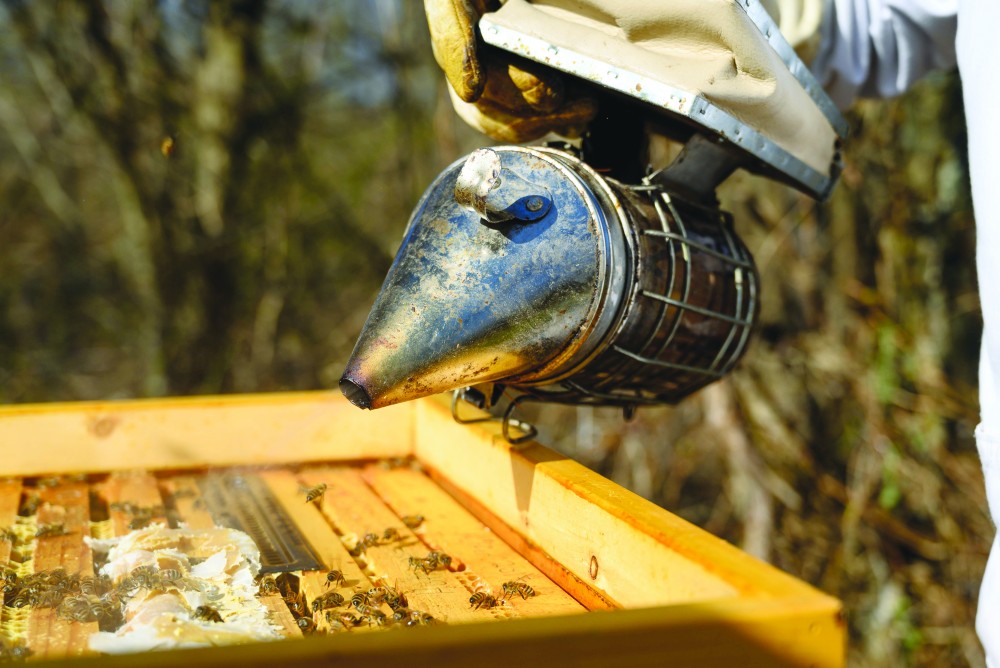 David Huffer holds a smoker that is used to give a warning signal to the bees to let them know the hive is about to be disturbed.

Different challenges face bees and beekeepers that simply did not exist before. Habitat loss, for example, has been increasing in Appalachia as more fields with different plants and flowers are cut down for developing roads, commercial areas and homes.

“While a honey bee can fly up to a 2.5-mile radius, just like with us it’s much more energy-efficient to shop nearby,” Lieberman-Smith said. “The further out we go, the more energy we have to expend.”

Even perfectly manicured lawns mean less food for the bees, David said. People also spray a variety of pesticides on plants that bees will visit. They then carry that chemical back to the colonies.

David and Teresa have had entire hives wiped out by pesticides. They have walked to the bee boxes to find the bottom board full of dead bees. 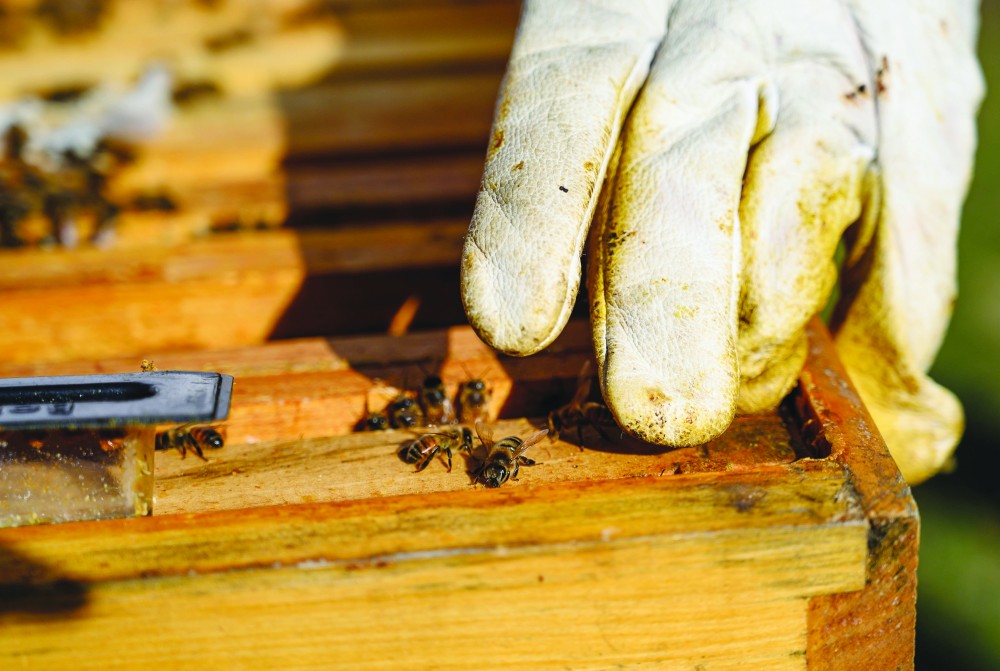 A bee crawls on the outside of a bee box owned by David Huffer.

One pest that has recently wreaked havoc on honey bees is the varroa mite. David compares it to a tick the size of one’s fist stuck to the human body. The parasite latches onto bees, sometimes sucking the fat out of their bodies and spreading diseases. A significant infestation can cause a whole honeybee colony to die.

Beekeepers can control the mites through different techniques such as natural acids, Mullet said. But it takes much more care to treat them.

Currently, honeybees are not on the endangered species list. However, other bee species, such as the rusty patched bumblebee, have made the list. The honeybee population has also been in decline in recent years.

To help with this, David and Teresa don’t mow their lawn for some months in the summer to help give the bees more foraging options.

Luckily, the colony seems to improve in numbers during the height of summer; David said he’ll typically have about 2 million bees. 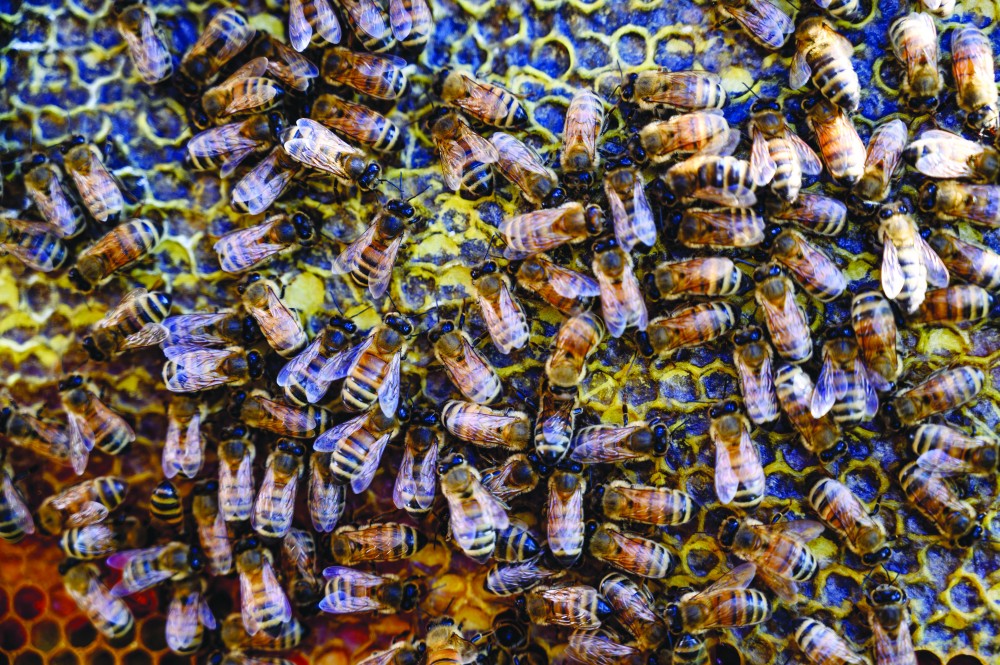 A close up one of David Huffer's hives.

David estimates one out of every three bites of food someone takes has been pollinated by a species of bee. Some say that if bees die out, humankind will go shortly thereafter.

“Without bees, we’d have much less diverse landscape in terms of what plants are out there and less accessible systems of agriculture,” Kietzman said.

It also seems that bees are producing less honey than they used to. Several years ago, it wasn’t uncommon to take about 100 pounds of honey off a hive, David said. Now, beekeepers are happy if they get half that.

Still, twice a year, when it’s time to collect honey, the whole family gathers for the experience.

“We tell every new beekeeper that you’ll never taste any honey as good as the first honey you take off because it’s just amazing, the difference between store honey,” David said.

Passing down the passion

David and Teresa didn’t come from a family of beekeepers. David’s father worked in the military; Teresa’s was a union worker. Their friend who introduced them to the hobby is a second-generation beekeeper, but the Huffers have started their own family line.

Their son-in-law helps manage the hives and maintain their other apiaries, and their daughter has also suited up on occasion. Now their 6-year-old granddaughter, Kyrian, has gotten passionate about bees, too.

Since she was 3, Kyrian has been working with bees. She’ll help take off honey from the hives and “play customer” at the Bee Barn while wearing her beekeeper uniform, Teresa said. Once, when a 4-year-old Kyrian was at the pool, her mother caught her trying to feed a bee part of her lollipop, remembering that bees eat sugar. 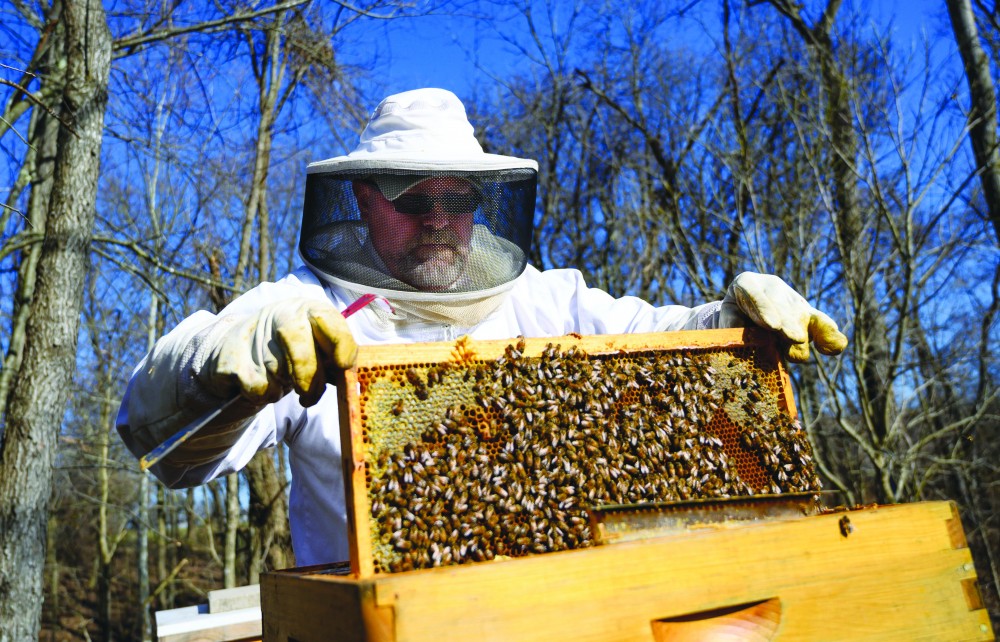 David Huffer lifts up a honeycomb frame to check on one of his many hives to make sure they are healthy and have survived the winter.

David and Teresa also welcomed another grandson and hope to one day teach him about bees and get him interested in the hobby.

“It’s a learning experience. You’re always learning something about the bees. They’re fascinating insects,” David said. “Who would’ve thought eight, nine years ago that I would be playing with 60,000 to 80,000 bees at a time?”