In the small city of Vincent lies Cutler Station, a band comprised of four best friends who were born destined to be heard and loved through the music they make together.

The band’s formation process, though, was not entirely cohesive. It took years for brothers John and Kirby Evans, and their longtime friends Steve Lipscomb and Jason Swiger to get to where Cutler Station is now. Despite the long process, all four guys, who have been together now for two decades, had nothing but smiles when reflecting back on their journey.

The story begins with Lipscomb and the Evans brothers playing in Columbus as Cutler Station, John said. John moved to the area once he secured a job in Parkersburg, West Virginia, and Lipscomb moved here six months later. Kirby stayed in Columbus until summer 2018. 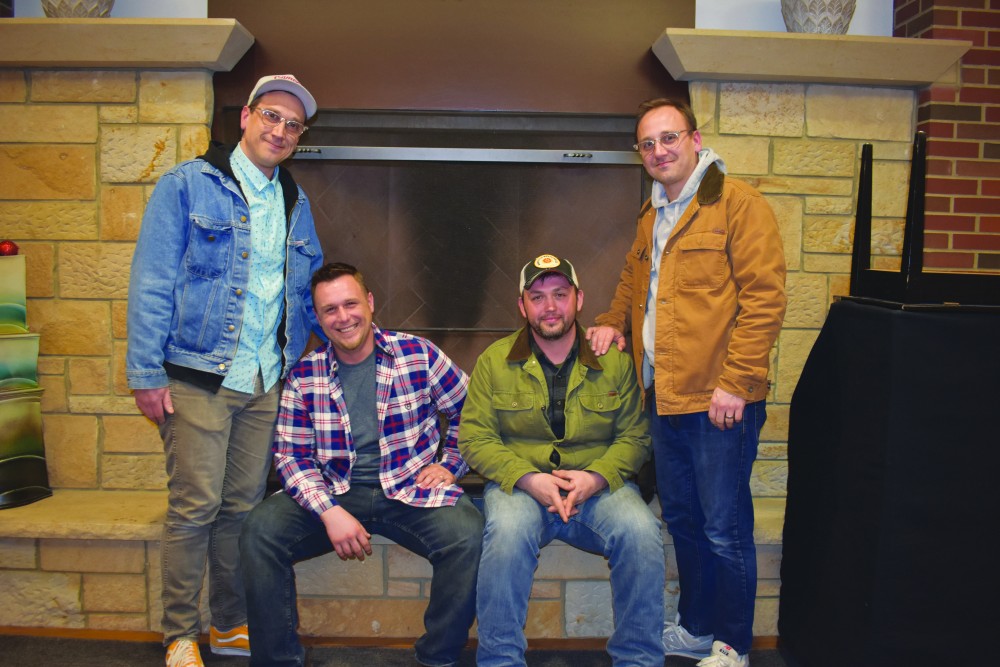 “We had played in bands prior to that in high school and college and stuff,” John said. “So as soon as we got back, we were like, ‘Let’s start it up like this.’”

Swiger, who had moved back here after finishing up at Marshall University in Huntington, West Virginia, had been following the band on social media.

“I was kind of following along because I liked what I had heard,” Swiger said.

The band is inspired by influential bands of the early ‘90s and early 2000s, especially Weezer.

And the other guys agreed.

All four men had different beginnings of how they decided to pursue music, though all members, except Swiger, were in choir. John received a guitar during his eighth grade birthday and once his older brother stole it and learned how to play, Kirby, the younger brother, asked for a guitar that Christmas.

“They got me a guitar from Sam’s Club,” Kirby said, as the group all chuckled. “We had our cousin in the first version, and we just had five-gallon buckets that we would play the drums on. That’s kind of how we (the Evans brothers) started playing music. It just kind of evolved from there.”

Lipscomb started playing trombone in fifth grade but chose to learn even more than that during high school.

“Some of these guys that are our friends were in a band in high school, and I kind of envied the thing they were doing,” Lipscomb said. “They were having fun and I had to work through high school, so I learned how to play guitar and drums.”

Swiger’s dad was a fan of metal music, so he had grown up listening to hair bands all his life. However, he became a drummer through a trip he made to Hard Rock Cafe.

“I started playing drums because I went to a Hard Rock Cafe and wanted souvenir drum sticks,” Swiger said. “I got them but didn’t keep them as a souvenir. I air drummed to all my favorite bands. My dad thought, ‘Well, I should buy you a set of drums if you’re gonna do that.’ All the noise started from there.”

Cutler Station released its self-titled album on Jan. 18. The album tackles different issues prevalent in Appalachia, especially the drug problem, but is surrounded by feel-good riffs and eccentricity. The band knows it manufactures its own distinct sound that can’t be compared to anyone else — and with that, each member is always willing to try anything. No one ever says no.

“I don’t think we have good enough vocals to just rock the Americana singer-songwriting thing, so we kind of have to lean on being creative,” Kirby said. “Then hope that the conglomerate of the song is good and not just someone who can sing really good. I think we’re trying to find more ways to connect with people — finding those things that most people don’t write about but still relate to people.”

The track “Southeast Ohio Speedster” is inspired by an ex-marine Lipscomb hired to work at his and his dad’s construction company. He was a drug addict and went to jail, but he had straightened himself up.

“In modern Appalachia, it’s really hard to find help in any business, really — qualified people who are willing to help,” Lipscomb said. “In the construction side of things, it’s even harder because it’s a physically demanding job and it doesn’t pay very well so you get a lot of unsavory characters.”

That guy eventually quit and later left Lipscomb a voicemail. John came up with the hook for the song based on him and that message: “You’re a Southeast Ohio speedster — higher than the minimum wage.”

“(The ex-marine) quits, leaves one day and doesn’t come back to work, and I get a voicemail where he butt-dialed me. It’s a four-minute long conversation he’s having with someone in his car about doing drugs and getting high and money. In that song, we took snippets of that voicemail underneath the track. John took the idea of that guy and made a character that resembles him but also some other Appalachia things like stir-track racing.”

The track “Appalachian Highway” started off as a bluesy, slower song, but it never felt right to the group. This was the song when the band really shifted gears and decided it wanted to play live shows.

“It was a turning point,” Swiger said. “Our point shifted as a band a little over a year ago. If you go back and listen to our first album (Happy Campers), it’s a lot different. We wanted to make an album where we could go on the road and replicate and play.

Cutler Station is not interested in making songs for radio play — rather, the band members prefer to create music they like and will constitute happiness for them.

“We do this for enjoyment, it takes away the stress,” Swiger said. “To me, it seems so ingenuine when you’re writing a song that’s like, ‘Okay, what would they like?’”

Lipscomb agreed but also included a humorous moment that got the whole band to form a smile.

“There really is not a radio (station) for the kind of music that we like,” Lipscomb said. “Maybe we are trying to be on the radio, but we’re just not good enough.”

Cutler Station finds it is very different from the artists with which they perform.

“The local bands we play with are normally driven by one singer-songwriter, one main person of the band,” Lipscomb said. “We come from a unit perspective of it. I think that makes us different.”

Jimmy Roux, a recording artist who performed with Cutler Station at a show in Belpre, Ohio, in October 2018, loves the band’s style.

“Cutler Station is something the Mid-Ohio Valley has needed now for a long time, from their original signature sound to their bizarre props and exploding energy they pour out to the audience,” Roux said.

The band prides itself on having no one leader of the group.

The band collectively agreed it’s easier to make music together being the best friends they are. Lipscomb added it’s always been that way, that they’ve always gravitated toward each other.

“You get a certain level of comfort when you’re playing with someone you know really well but also played with a long time,” Swiger agreed. “I guess it’s not something you can really replicate.”

“This first and foremost is our hobby. This is the truest representation of our personalities in music”Steve Lipscomb

“Cutler Station looked like a good fit for our venue — fun and funky,” Whitney said in an email. “The local music scene in Athens is part of what makes our town great, and we enjoy hosting bands from around the region as well as touring acts from as far as California or Maine and all points in between.”

The members of Cutler Station finds it important to let people know they don’t have to listen to the band’s music, but they hope they do.

“We offer a different pallet but still in a package that’s listenable,” Lipscomb said. “It’s not hard to dig into. ... This first and foremost is our hobby. This is the truest representation of our personalities in music.”