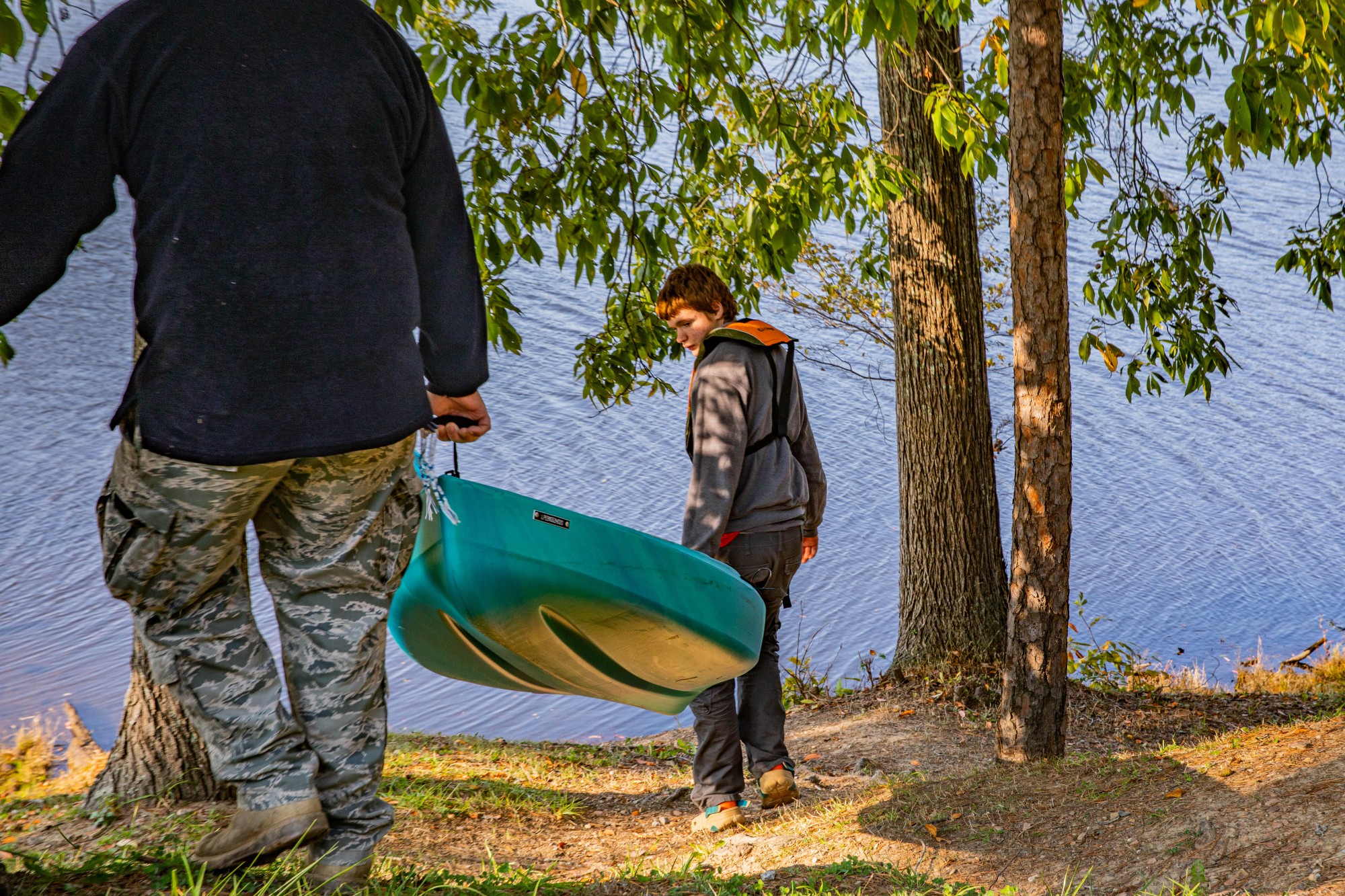 Stacey Scott assists his son, Micah, with carrying his brand-new kayak from his birthday into thd banks of Lake Hope in McArthur, Ohio, on Tuesday, Oct. 6, 2020. "We've been out here for a couple weeks," Stacey Scott says, "When I was stationed out west, the one thing I missed the most was the change in color here around this time."

D uring a typical year, Hocking Hills State Park is teeming with life, as visitors explore the various trails, camp in the park and visit landmarks such as Old Man’s Cave. This year, however, exploring Hocking Hills came to a screeching halt in March when COVID-19 closures began.

Hocking Hills decided to close because of the difficulty of social distancing on narrow and rugged trails, said Heidi Hetzel-Evans, communications manager for the Ohio Department of Natural Resources.

Hocking Hills reopened in phases, as staff reworked certain areas and redesigned trails, Hetzel-Evans said. This included turning some two-way trails into one-way paths to lower the chances of people seeing each other.

Despite the closure of Hocking Hills, people looking to explore the outdoors found other places among the 74 other state parks in Ohio to enjoy.

Since people sometimes can’t get into the park of their choice, they have been going to other parks, which has led to an increase of campers at all of the parks, Hetzel-Evens said.

Lake Hope State Park, which lies outside of Hocking Hills and amid Zalinski National Forest, has seen a significant increase in visitors, cabin use and use of recreational services.

The park was “packed to the gills every weekend” before Hocking Hills opened back up, Lori Grupenhof, assistant manager at Lake Hope State Park, said.

During a typical year, Grupenhof doesn’t expect Lake Hope to be crowded, except for holidays. This year, however, she’s amazed at how many people have flocked to Lake Hope for their own getaway.

“And that's just not the norm: it's the norm possibly on a holiday but not the norm on every weekend in the summer,” Grupenhof said. “I mean, I've never seen it so crowded.”

Even after Hocking Hills reopened, the park remained busy every weekend.

During the same time period in 2019, there were a total of 516,280 nights for stays between campgrounds, cabins, yurts and rent-a-tent sites between all state parks.

Stays during the week have been slowing down since school is back in session, but many of the remaining weekends are full or close to capacity, Hetzel-Evens said in an email. Nov. 1 marks the beginning of the off season.

Although state parks are popular tourist spots in Southeast Ohio, there are other tourist-oriented businesses that are thriving during the pandemic. Uncle Buck’s Riding Stable and Dance Barn, located at 73930 Buck Lane in New Marshfield, has been incredibly successful since opening in May.

“Actually, once they let us open back up, it's been better than we've ever, ever had,” said David McPherson, also known as Uncle Buck, the owner of Uncle Buck’s Riding Stable and Dance Barn.

The trail rides, a service in which guests can take a guided horse ride on a trail, have been the most popular service offered at Uncle Buck’s.

There are other segments of Uncle Buck’s that have not been as successful, but it is not advertising those services because that would involve crowding people in an area.

Uncle Buck gives some credit to COVID-19 for bringing in more business but also believes that nearby trails, and trails currently being developed, have helped bring in business.

“I think COVID-19 has something to do with it because, again, I think people feel like this is an activity they can do, and it's not risky, but there's other things going on out here that I think are having an effect also,” Uncle Buck said.

Despite the success that Uncle Buck’s, Lake Hope and Hocking Hills have experienced this summer, Athens County has not been able to experience that success in the tourism industry.

Expectations for tourism for the rest of the fall season and winter season are optimistic for Athens County.

Uncle Buck believes that business will continue to thrive for the rest of the fall.

Even since school is back in session, he estimates it is doing twice as much business and bookings on Saturday and Sunday are full.

As for Lake Hope State Park, business is expected to stay strong through the fall and possibly the winter.

“And while we might still be full on the weekends in our cabins, weekdays really slowed down, and that has not been the case for September,” Grupenhof said. “I mean, we're not full by any means, but we're busy — much busier than we've done in years past.”