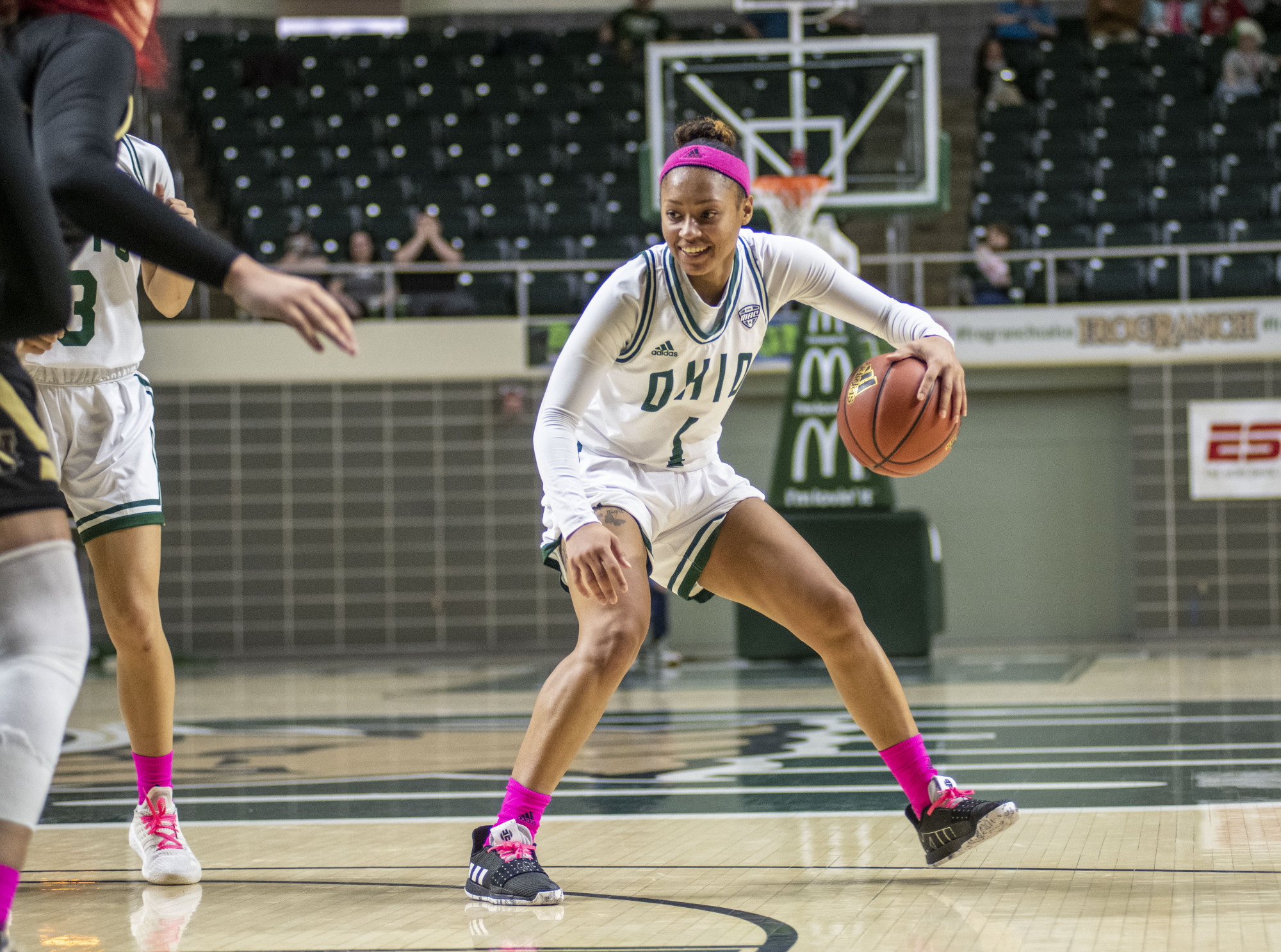 CeCe Hooks (#1) pulls back from a fast break against Western Michigan during the home game on Saturday, February 16, 2019.

Together Since the Start

Cece Hooks, Gabby Burris, Erica Johnson and Kaylee Bambule have been with the Bobcats since the first day of their collegiate careers. They’ve felt heartbreak, and they’ve seen success, but it’s always been together. They’re teammates, but most importantly, they’re best friends.

Hooks and Johnson began their journey together before coming to Ohio. They played Amatuer Athletic Union basketball together on the All-Ohio team in the eighth grade, and both received offers to play from Ohio coach Bob Boldon. 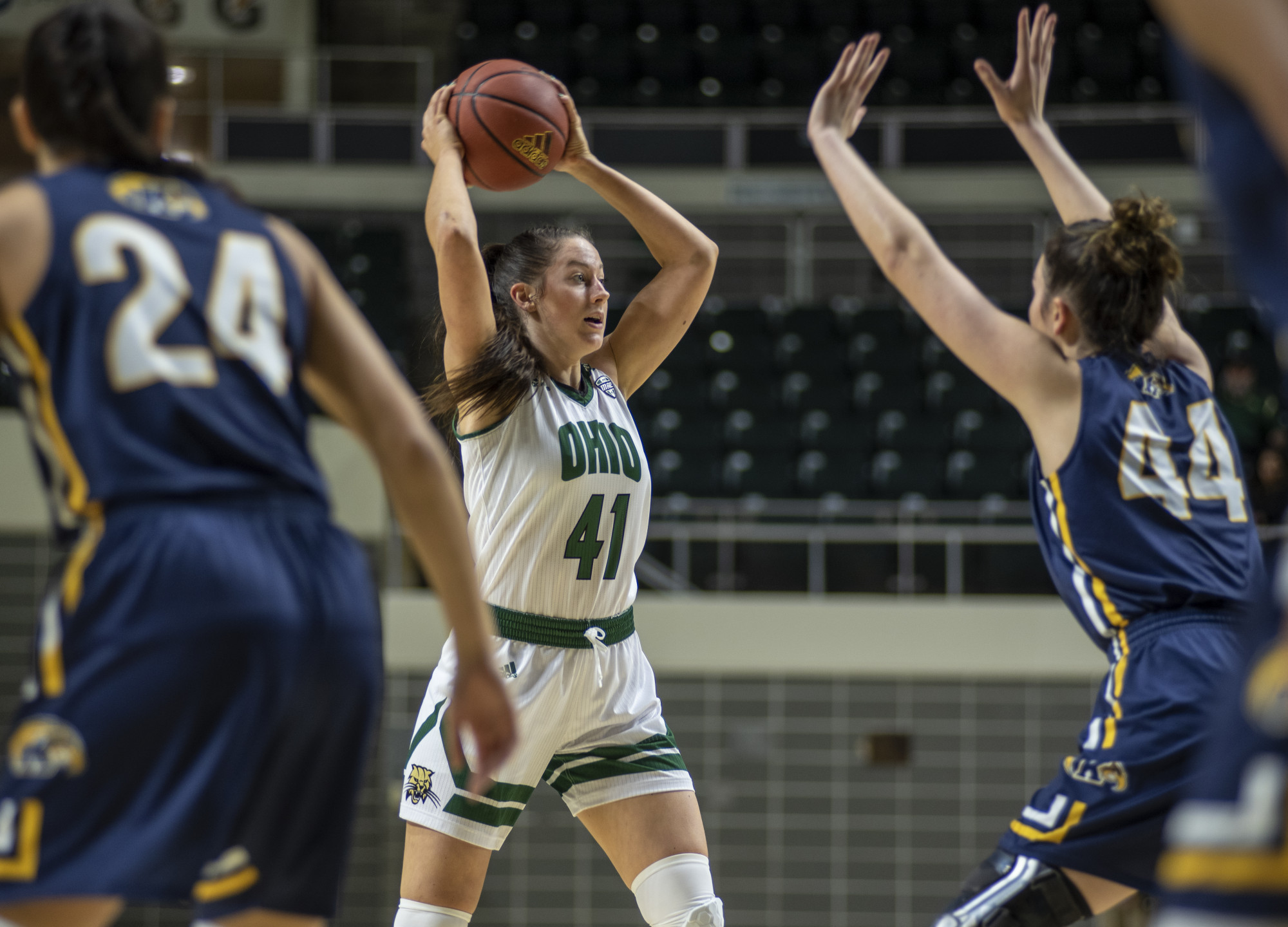 A few years later, on the other side of the Ohio river, Burris was playing for the West Virginia Thunder Gold team under coach Scott Johnson. Burris was a standout forward on the team for her versatility. Her talent also earned her an offer from Boldon.

Two states over, Bambule was playing for Montini Catholic High School in Lombard, Illinois. The guard had previously earned First-Team All-State honors and was dubbed an ESPN 3-star recruit. Her ability to hit a strong 3-pointer earned her an offer, as well.

On Nov. 11, 2016, Ohio announced that it had added six commitments for the class of 2020. Hooks, Johnson, Burris and Bambule were all included on the list. In fact, Hooks and Johnson spoke to each other before making their decision.

“We talked about coming here together,” Johnson said. “We called each other before making our final decisions, and we decided to come here together.”

In the fall of 2017, five bright-eyed freshmen arrived in Athens with the dream of winning a Mid-American Conference Championship — one of which transferred after one year.

That season, Johnson redshirted to recover from a knee procedure while her peers began their collegiate careers. Bambule ate minutes here and there for the Bobcats in a true freshman role, but Hooks and Burris took off.

CeCe Hooks (#1) pulls back from a fast break against Western Michigan during the home game on Saturday, February 16, 2019.

Burris played in 31 games for the Bobcats and started in 10 of those. She was a force to be reckoned with, and it earned her All-Freshman team honors. Hooks, however, left her mark on the record books in her first season. She broke the program record for single season steals with 100 and earned the MAC Freshman of the Year award.

It wasn’t long before Ohio realized it had a catalyst on its hands.

The 2018-19 season was one to remember. That batch of Bobcats became the first in program history to win 30 games in a season. It was also the year that Hooks became the 16th 1,000-point scorer in Ohio history.

It was also the year Johnson came back — in a big way. The then-redshirt freshman earned MAC Freshman of the Year and Sixth Player of the Year. Johnson became a staple in the Bobcats’ lineup in the latter half of the season, joining Burris and Hooks in the starting five.

Bambule was a regular off the bench for the Bobcats that season, even earning time in the MAC Tournament championship game. Ohio may have lost to Buffalo 77-61 that day, but it had learned what the young talent on the team could do.

The 2019-20 season started off as usual. Ohio was barrelling through its nonconference schedule and making waves along the way. Its first splash was Nov. 10, 2019, when Johnson recorded the first triple-double in program history. She grabbed 24 points, 13 rebounds and 11 assists against American University to notch her name in the books. That day is still one of Johnson’s favorites.

Seven days later, Ohio defeated Ohio State in Columbus for the first time in school history. Burris, Johnson and Hooks all took part in the win. That day still lives fresh in Boldon’s mind as one of his favorite moments coaching.

Then, something out of their control hit the Bobcats. The COVID-19 pandemic ended their chances at a MAC Championship after only one round of the tournament.

“That moment was taken away from them,” Boldon said. “I think once you go through that, you learn to appreciate the moments.”

But there were still more moments to come for the Bobcats.

New regulations were set in stone for the 2020-21 season regarding the coronavirus pandemic. The four were about to experience basketball like they never had before: with cardboard cut-outs in The Convo seats. Limited attendance was allowed for families, but no one else could attend the games. 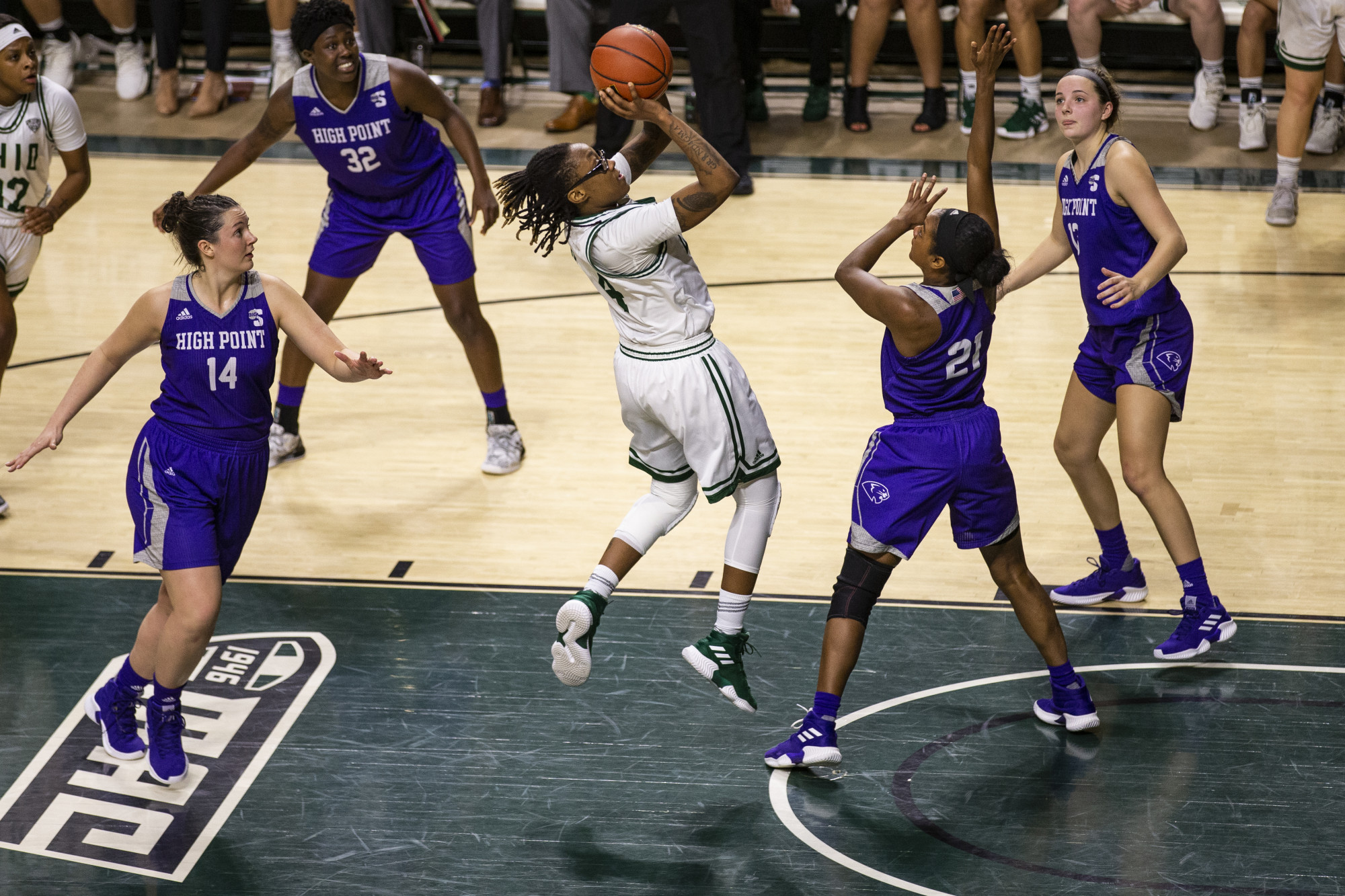 Ohio forward Erica Johnson (#4) attempts a shot during the fourth quarter of the Bobcats game against the Panthers on March 21, 2019, at the Convo Center in Athens, Ohio. The Bobcats won the first round of the Women's National Invitational Tournament by a score of 81-74.

Ohio marched on, though. It skated by in a short nonconference schedule, defeating Notre Dame at the last second and started off conference play with hesitation. The Bobcats were jumping back and forth between winning and losing for the majority of the first half — until they played Buffalo.

Bambule was still not a regular starter at that point, unlike her classmates. She was fighting for minutes wherever she could get them. She only tallied four minutes against the Bulls. However, they were important.

Bambule entered the game when the Bobcats were down 11 points in the last few minutes. Within seconds of entering the game, Bambule hit the go-ahead 3-pointer to give the Bobcats an 82-81 lead with under 30 seconds to go. Hooks then contributed a layup to put the final touches on the upset.

That game is still one of Bambule’s favorites.

“The only reason I got to do that was because we were so together,” Bambule said.

Later that season, Bambule became a regular starter, and the four began their march to Cleveland together for the first time as starters. The four made it to the tournament. However, they once again came up short.

But at the end of the year, it was possible that one of the four was going to leave. Hooks had declared for the WNBA draft in the spring of 2021. It seemed as if the bond that was beginning to show on the court was going to be missing a piece.

All four returned for the 2021-22 season after Hooks undeclared for the draft. It was their go-time, and they were ready to mentor the younger players. Ohio had been picked to win the MAC regular season, and a schedule of tough opponents ahead of them needed to be knocked down.

Fans were once again in the stands of The Convo to watch the Bobcats play basketball. For once, things felt like they had before the pandemic. Ohio had its mojo back. 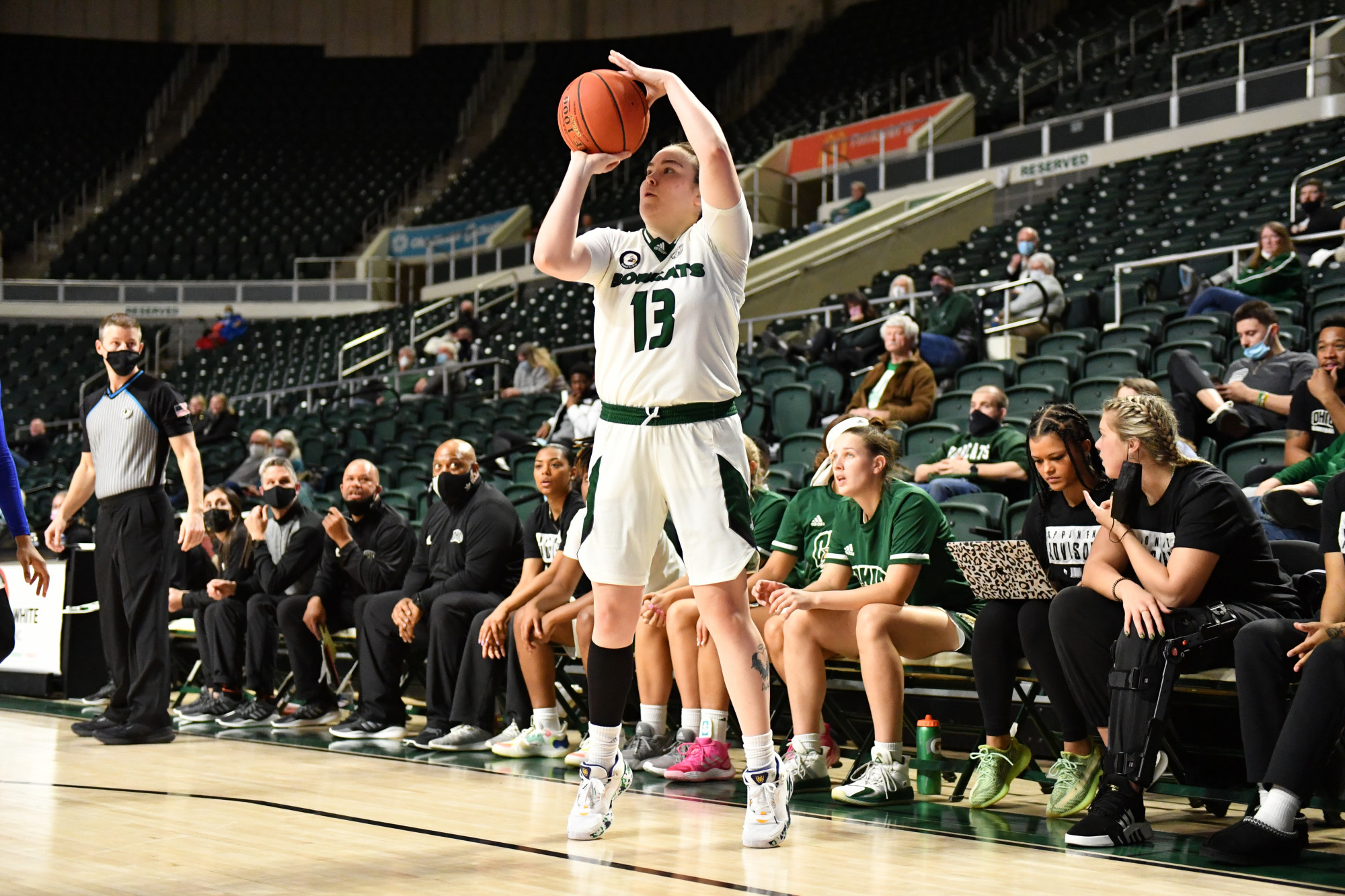 “It was fun,” Hooks said in the post-game press conference after Ohio’s first home game. “Especially having the band back.”

The energy didn’t just come from The Convo, though. It was evident early in Ohio’s conference schedule that the four were going to be unstoppable. They have an innate sense of where the other is on the court, and that allows them to dupe their opponents.

That sense was on full display when Ohio routed Kent State 70-64 on Jan. 12 in its first MAC win of the season.

The core four were on a warpath to get their MAC Championship — but not without celebrating more individual milestones first.

Hooks became the leading scorer in Ohio and MAC history within the same week. Both times, she was showered in hugs from her teammates and applause from those in attendance. Some of her teammates were brought to tears watching her break the MAC record. They knew that Hooks’ success had been a long time coming, and there was no one more deserving.

Later that week, Ohio upset both Toledo and Buffalo. However, that’s when the four hit a roadblock.

Injuries and illness caught up with them, and there was a span where one or more of the core four was missing from a game or two. It was up to the young players to carry the Bobcats to victory, but that time reminded the four of the lesson they learned in the 2019-20 season: Every game and every moment spent together is a blessing.

It's still up in the air whether the four will get their final shot at a MAC Championship together. Ohio slipped in the standings and is hanging onto a spot in the tournament by a finger.

The four know that they’re there for each other no matter the outcome, though.

“That’s in a sense of basketball and life,” Bambule said. “We know the struggle, and we’re going to get through this together.”

When it's their time to depart from Ohio, the four will know they’ve done all they can to better the program. Their names are splashed all over the record books, and they’ve had the opportunity to mentor the future of the program that has shaped a large portion of their lives.

They’ve matured together and made incredible memories on and off the court. From renting boats at Strouds Run State Park to playing in the National Invitational Tournament, they’ve done everything together.

When it's time for the four to pass off their hats, they’ll leave Ohio better than they found it.

“I always want the opportunity to help (younger players) and help other people learn because, soon, I’m going to be living my basketball life through them,” Burris said.

From strangers to family all in five years. Ohio will never forget its core four.