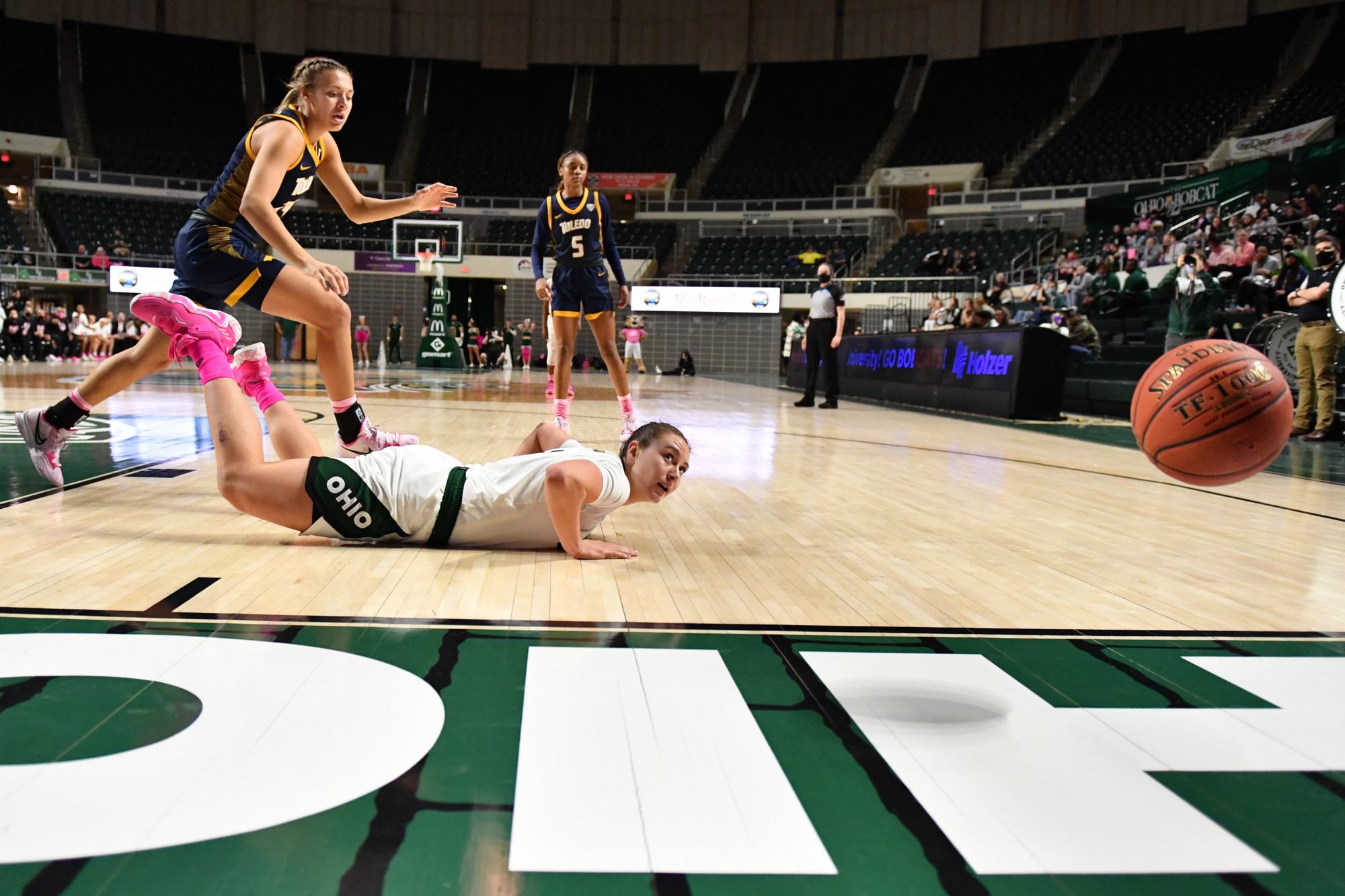 Ohio gaurd Madi Mace (3) watches as the ball bounces out of bounds during the Bobcats' game against Toledo on Feb. 16, 2022, in The Convo. The Bobcats lost 73-76 to the Rockets.

By Will Cunningham | Slot Editor

A quick look at Ohio’s record this season would make it seem as if it has drastically underperformed. Ohio was picked to win the Mid-American Conference in the regular season and received more votes than any team except Buffalo to win the MAC Tournament.

However, the Bobcats are currently 14-10 overall and 8-7 in the MAC, where they sit in sixth place — barely in a position to qualify for the MAC Tournament.

Ohio has grappled with several issues this season that have hurt its record and performance. There are two main reasons for these struggles, and Ohio’s play on the court is not one of them.

First, the Bobcats have dealt with numerous schedule changes. Their first three conference games in late December and early January were postponed. This led to the rest of their schedule being rearranged and Monday games being added to make up for lost time.

The schedule shuffling resulted in the Bobcats playing eight games in the final three weeks of the regular season, an already laborious task made more difficult by Ohio’s second issue this season: sporadic and long-term absences.

Long-term absences began to affect Ohio before the season tipped off, as Caitlyn Kroll, Peyton Guice and Jasmine Hale — who were major parts of Ohio’s rotation during the 2020-21 season — have not had an on-court presence this year. The trio averaged a combined 62 minutes a game and were helpful in taking some of the load off Cece Hooks and Erica Johnson last season but haven’t played a minute since then.

The loss of Kroll in particular was devastating. She averaged more than 32 minutes per game in 2020-21 and played an important role as a ball-handler.

Ohio was already down three rotation players at the beginning of the season, but things only worsened from there. Ella Pope and Abby Garnett, the players meant to fill Kroll’s void, were lost as well after a few weeks of play. Garnett appeared in the Bobcat’s first two games of the season and Pope the first five, but neither has seen the floor since.

So, there Ohio sat, just three weeks into the season, with a rotation of just six players — one of whom being a freshman. Yaya Felder was thrust into the spotlight, even though she had just begun her time at Ohio.

Then, the postponements came into play. The Bobcats began to struggle with having enough players to field a team under the new MAC guidelines during and after winter break. This resulted in several postponements early in their conference schedule.

But the absences didn’t stop there.

Johnson missed their first conference game of the season, a loss to Northern Illinois on Jan. 8. She later missed Ohio’s Feb. 14 win over Eastern Michigan due to injury. Hooks missed a game that same week, too. She missed Ohio’s loss to Western Michigan on Feb. 12 after sustaining a head injury in the previous game.

Burris missed the loss to Northern Illinois on Feb. 6. Bambule also missed that game as part of her two-game span of absences in early February. Both her and Burris’ absences were due to COVID-19 protocols.

With that, the only two players who have played in every game for Ohio this season are Felder and Mace, both underclassmen with limited collegiate experience. Ohio coach Bob Boldon has had to lean on his younger players all season, as he has dealt with constant changes to his starting lineup and rotations.

When looking at this Ohio season, the struggles Ohio has gone through cannot be ignored. The Bobcats have had to pick up the pieces on multiple occasions, and now, it is in the position to qualify for the MAC Tournament.

And if the Bobcats can get to that stage of the season with their usual six-player rotation intact, they will be a better team because of what they have overcome — and a team that no one wants to face in a single elimination tournament.