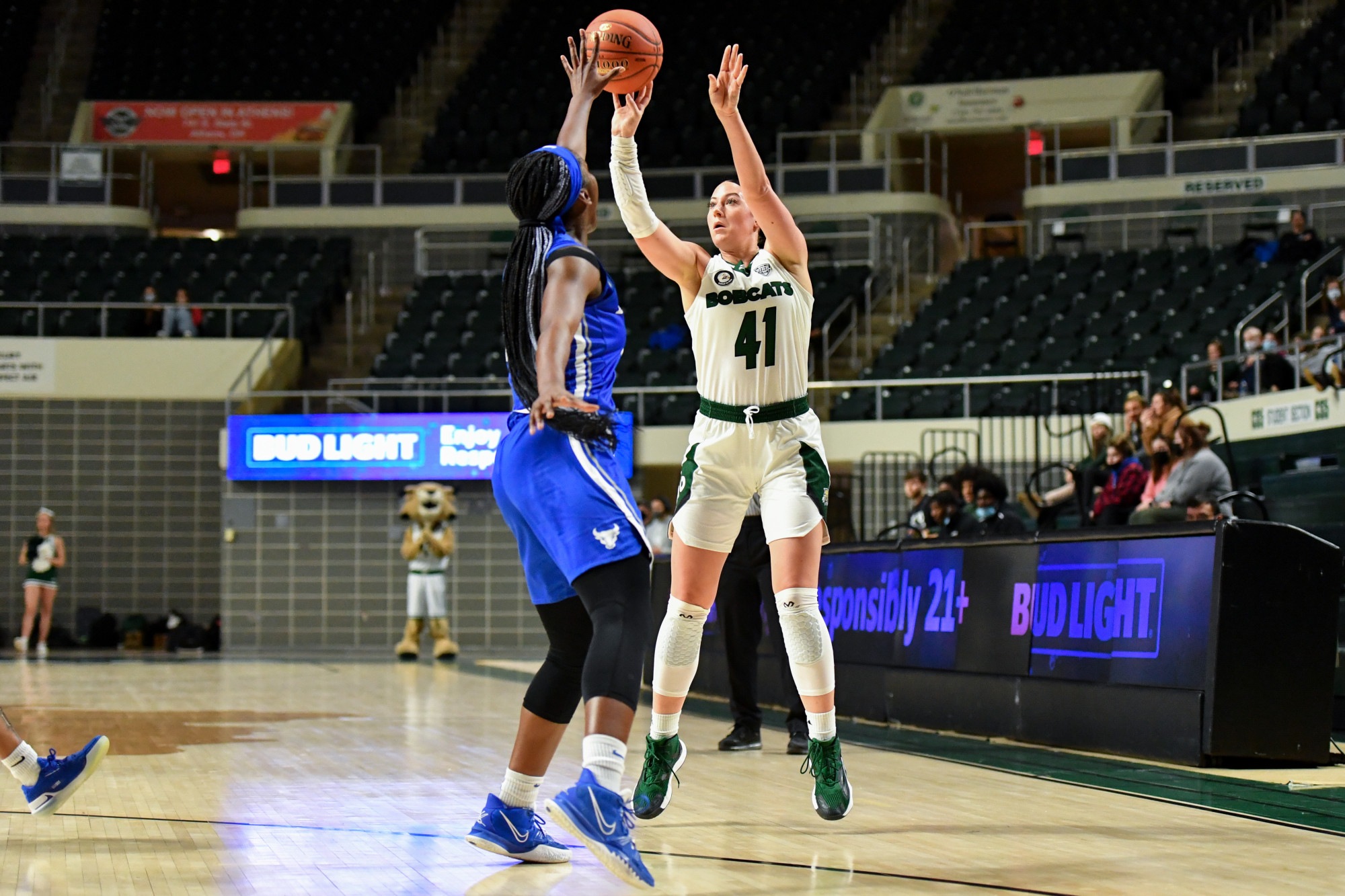 Ohio forward Gabby Burris (41) attemps to make a three-pointer while Buffalo forward Adebola Adeyeye (25) tries to block the shot during the Bobcats' game on Jan, 24, 2022, in The Convo. The Bobcats' won 68-66

By Will Cunningham | Slot Editor

When Ohio coach Bob Boldon came to Athens in the summer of 2013, Ohio had shot around 500 3-point attempts per season over the seasons before his arrival. But Boldon changed that immediately. Ohio attempted nearly 300 more 3s in his debut season than it had the previous season.

Since Boldon took over, Ohio has never shot fewer than 700 3-point attempts in a season. The only season it came close to going under that number was the shortened 2020-21 season, when it only played 25 games.

On the surface, the 2021-22 season has been a standard — even good — 3-point shooting season for Boldon’s Bobcats. They are shooting their third-best percentage of his tenure at 33.5% and have made the fourth-most 3-pointers per game at 9.1.

Taking a deeper look into their 3-point shooting numbers, however, reveals that this has been a strange season from deep for the Bobcats.

Unsurprisingly, the Bobcats’ success has mostly gone hand in hand with their 3-point shooting, especially since the start of their Mid-American Conference schedule.

The relationship between 3-point percentage and team success may not be surprising, but it’s surprising how often Ohio shoots significantly better or worse than their overall percentage.

In just six of Ohio’s 15 conference games, its 3-point percentage has been within five points of its season average. Additionally, there have been some extreme outliers. Ohio shot on the low end against several teams. It shot 18.2% against Western Michigan on Feb. 12, 17.4% against Ball State on Feb. 2 and a measly 5.9% against Miami on Jan. 17.

It’s strange how the Bobcats’ 3-point shooting has swung from game to game. One game, they shoot well, and the next, they are struggling to find the net.

In four separate times since conference play began, Ohio saw an increase or decrease of at least 20% from one game to the next. There has also been an additional four swings of at least 15% this season.

Ohio’s 3-point shooting inconsistency goes beyond its team performance. There is an individual component to it as well. Ohio’s two highest volume 3-point shooters, Erica Johnson and Gabby Burris, have had their share of inconsistency this season. Both athletes have had their own three-game stretch of tumultuous shooting this season. From Feb. 14-Feb. 19, Burris hit 11-of-25 3-point attempts. Johnson hit 11-of-26 from Jan. 24-Jan. 29.

Fortunately for Ohio, it has shot the ball extremely well over the last three games. As it enters the final four games of its season, Ohio will need to keep up its 3-point shooting prowess to make sure it qualifies for the MAC Tournament.

This year’s Bobcats may be one of the most inconsistent 3-point shooting teams of Boldon’s tenure, but at their best, they can match any team he has coached in Athens.