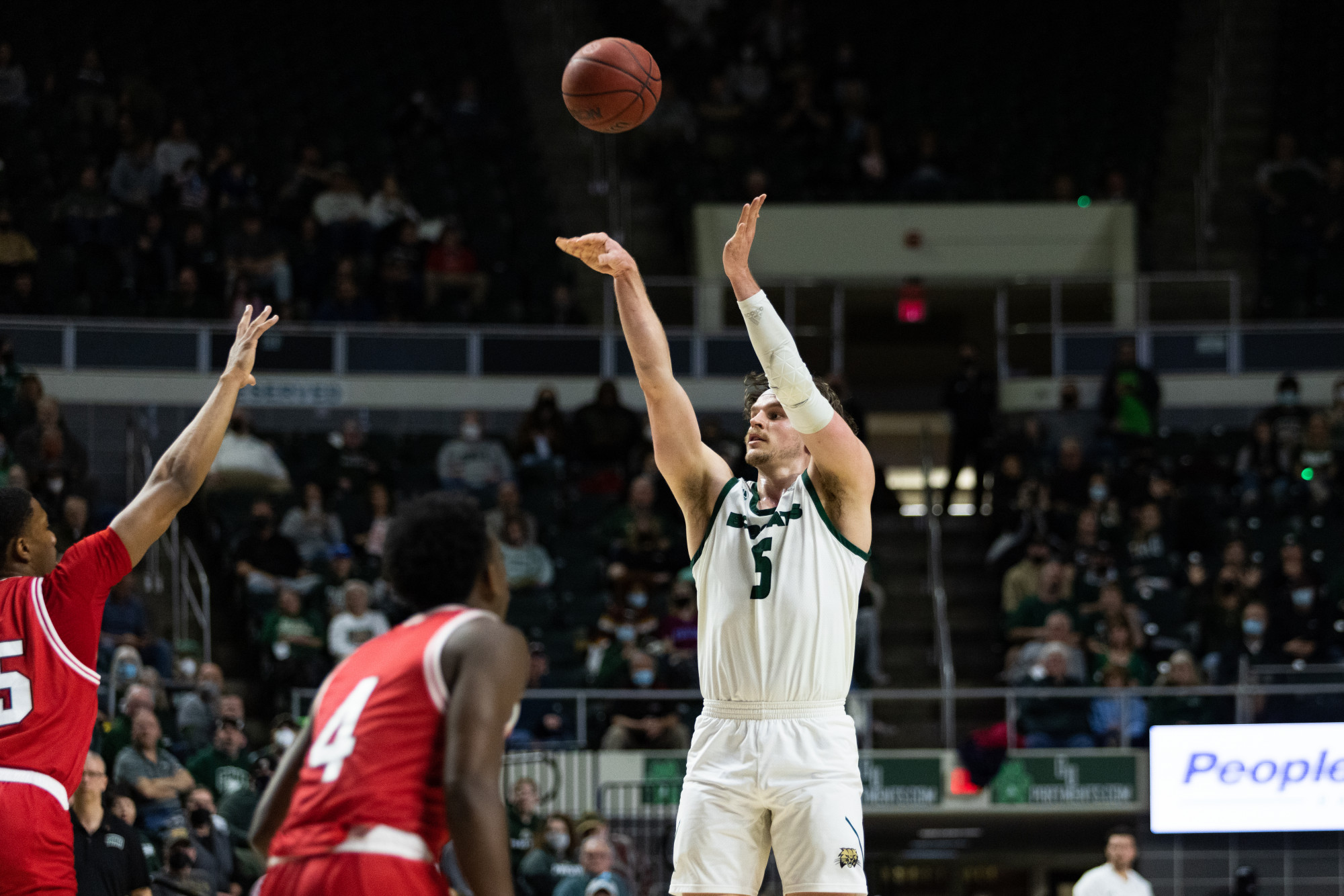 Ohio University forward Ben Vander Plas (5) going up for a three point shot against Miami University at The Convo on Tuesday Feb. 15th, 2022

The Mid-American Conference Tournament is less than two weeks away, and nothing is final. Five teams have secured their appearance in the tournament while four more are clambering to secure one of the three remaining spots.

None of the seedings are set in stone, either. Toledo and Ohio are neck-and-neck with three games apiece remaining on the schedule. Kent State and Buffalo are both riding lengthy win streaks, and both have the potential to move further up the ladder.

With less than two weeks until the MAC Tournament begins in Cleveland, The Post took a look at all 12 teams and ranked them from top to bottom:

Toledo is a team to be feared. Despite recently escaping with a two-point win over Central Michigan and being toppled by Kent State, Toledo has nonetheless dominated conference play. It won both games against its biggest competitor, Ohio, and has only truly been stumped by Kent State. Led by guard Ryan Rollins, Toledo’s lineup is a well-oiled machine that doesn’t pull punches.

The Golden Flashes upset the balance of the MAC after stomping out both Ohio and Toledo in the same week. They’ve been nigh invincible while on their nine-game win streak, and it comes at the perfect time. The Golden Flashes are just one game behind Toledo and Ohio in the standings, and there is plenty of time for them to make a last second leap.

Despite being tied for first place at the moment, there’s reason for Ohio to be placed at No. 3. It dropped both of its games against Toledo, and its loss to Kent State last Friday was the ugliest of the season. There have been few roadblocks Ohio has hit this season, but it can’t seem to get a leg up over teams near the top.

A seven-game win streak launched Buffalo toward the top of the MAC and helped punch its ticket to Cleveland. Its conference-leading offense scored more than 100 points in two of those games to boot. Still, the foundation of Buffalo’s recent success will be tested when it hosts Toledo and travels to Kent State in its final two games of the season.

The Zips started out conference play 9-3, but a three-game skid midway through February knocked them down a peg. They lost those three games by a combined nine points, but wins over Bowling Green and Eastern Michigan put them back on track. If the Zips can close out narrow games, they’ll put up a fight in their final three games.

The Cardinals have won once in their past five games and are in danger of forfeiting their sixth place spot in the standings. The worst of their schedule is behind them, however, and their upcoming game against Akron presents an opportunity to shake up the power dynamic before the regular season ends.

Even though Miami has won three of its last five games, Miami has trudged through a murky February slate with little to come away with. It could’ve upset Buffalo at home Tuesday, but it came up short after a last second 3-point attempt. Miami grapples with inconsistency, but it has the tools to stay in the MAC Tournament picture down the final stretch.

A pair of road wins over Ball State and Akron last week were offset by back-to-back losses to Miami and Eastern Michigan. The Huskies have been competitive as of late — their last four games have all been decided by six points or fewer — but they still have a hard time sealing close games.

Between Jan. 29 and Feb. 8, the Chippewas won four of their five games and seemed to have turned a corner following a rocky start to conference play. But they’ve gone on a five-game losing streak since, which included losses to Western Michigan and Eastern Michigan. It’s difficult to find success in the first season with a new coach, and the Chippewas aren’t having much luck.

The Falcons were dealt a poor hand to end the season. They host Western Michigan on Saturday, which shouldn’t be too hard to handle. However, they close the season with games against Ohio and Toledo. If their five-game losing streak is taken into consideration, the Falcons’ prospects of a late run for the No. 8 seed are grim.

The Eagles have won two games in February, and they won both by a combined seven points. Its last seven losses have all been decided by double digits. At this point in the season, the Eagles are simply fighting to stay out of the basement.

The Broncos are well out of the MAC Tournament picture and have been for much of the season. They earned their only two conference wins after upsetting Central Michigan and Akron at home. Aside from those wins, there’s little optimism brewing for the final three games of the regular season.