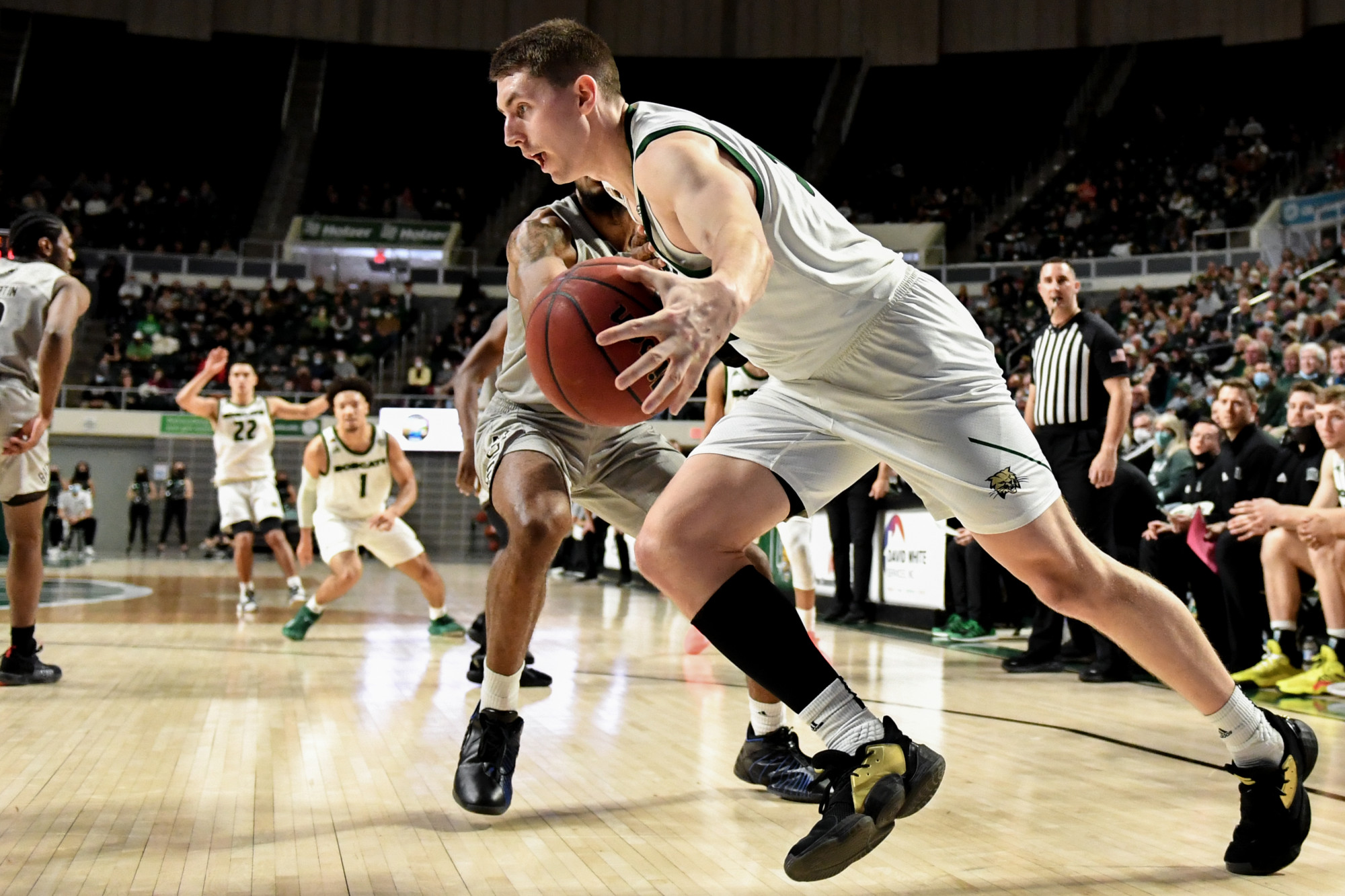 Ohio forward Jason Carter (30) dribbles the ball down the baseline during the Bobcats' game against Western Michigan on Feb. 5, 2021, in The Convo. The Bobcats won 77-64

Men’s Basketball: Jason Carter’s journey to Xavier and back

Jason Carter is just happy to be playing the game he loves.

The redshirt fifth year is in the final weeks of his comeback tour with Ohio. After transferring from Xavier in April 2021, he has fit in seamlessly as Ohio’s big man who can shoot from any spot on the court and stretch the floor. He’s been one of the key factors to Ohio’s dominant run through the regular season.

Carter has been having the time of his life, and he’s still getting readjusted to the Bobcats. He’s been received with open arms since he returned to Athens, and he’s never felt out of place.

“The coaching staff is awesome, they've made me feel well welcome since the start and it’s been fun,” Carter said. “And obviously we're having a pretty good season so far, and that makes it even better.”

But that’s the thing. Carter never expected to come back.

After the end of his redshirt sophomore season with Ohio in 2019, Carter had one foot out of the door. Ohio was in a state of upheaval. Then-coach Saul Phillips’ contract was not renewed following two consecutive losing seasons, and Jeff Boals was hired as his replacement less than a week later.

Carter had reservations. He was recruited by Phillips, and he’d built up a respect for the man who brought him to Ohio. He met Boals at the midpoint of his college career and was unsure of what to expect.

“I just wanted to be able to choose who I was playing for,” Carter said. “With everything going on it was just like everything getting turned upside down.”

Three days after Boals was announced as Ohio’s coach, Carter entered his name into the transfer portal. It wasn’t long before he received a call from Travis Steele, the head coach at Xavier.

One of Steele’s assistants, Sam Frayer, had played for Ohio and was teammates with Carter. The two had been close friends, and Frayer recognized Carter’s name when looking at the portal.

“Once I saw him in the portal, Steele asked me, ‘Hey, do you know this guy?’” Frayer said. “One thing led to another and it kind of worked out. I never thought about it on my end.”

Carter had mentioned his plans to Frayer beforehand, but neither had discussed it past the surface.

But having a friend so close to a coach unintentionally gave Carter an understanding of how the Musketeers operated. Steele paid Carter a visit, and the forward came to his decision in less than a week. Five days after entering the portal, Carter committed to Xavier and left his time at Ohio behind.

After he joined the Musketeers, Carter was welcomed with open arms. The forward was integrated into the starting lineup off the bat. He started in all but two games and averaged over 28 minutes per game. His affable personality endeared him to the coaching staff, and he formed a quick comradery with many of his teammates.

But the longer he played for the Musketeers, the more he felt like he didn’t belong.

Carter couldn’t ignore his own internal reservations. He struggled to adapt to a physically demanding Big East schedule, and his performance suffered as a result. Carter, who’d been Ohio’s leading scorer in 2018-19, rarely cracked double figures during his two seasons with the Musketeers.

“He was playing forward in the Big East for 30 minutes a night, which can beat up a guy,” Frayer said. “I think he was playing 36 minutes at some points. That’s going to take its toll, I was concerned about his health.”

As his two seasons with Xavier wore on, Carter noticed himself slipping. He wasn’t meeting his own standards. He told himself he was too hesitant, and that he lacked the aggression he’d played with at Ohio. Carter had lost confidence in the skills that brought him to Xavier. He refused to cut himself slack. He wanted to live up to the mounting expectations he began to stockpile on himself.

His love for basketball had been supplanted by a need to please an unpleasable force that clawed at the back of his mind.

“It was a time of struggle, in terms of trying to figure my way out there,” Carter said. “I don’t know if I ever truly did.”

By the end of 2020-21 season, Carter reached a point of complete exhaustion. His strive for complete, unwavering perfection, in lockstep with the COVID-19 pandemic that staggered Xavier’s schedule, had beaten him into submission.

He wanted his basketball career to be over.

Although he had been granted an extra year of eligibility due to the pandemic, Carter initially disregarded it. Basketball was the last thing on his mind, much less the transfer portal.

But while job-surfing one day toward the end of the season, the idea of another year in the portal became more promising. Although he wasn’t looking at it from a basketball perspective, he figured he could get another degree and find a good job after his sixth season concluded.

But then, he began to reminisce about Ohio. His girlfriend — now fiancee — was still in school there, and a handful of his friends from before his first transfer were still playing.

“I started thinking about the basketball piece,” Carter said. “I was like ‘Yeah, I get to play with Ben (Vander Plas), they've got good starters returning and Mark Sears and we were hoping (Jason Preston) would have come back but he decided to leave and he got drafted which is awesome.’”

On March 24, 2021, almost two years to the day after departing Ohio for what was supposed to be his final move, Carter re-entered his name into the transfer portal.

Carter wanted to rejoin the Bobcats, but doubts clouded his mind. He feared Boals and the rest of the Bobcats might resent him. He left when prospects looked uncertain. When Boals asked for trust, Carter left.

It wasn’t long until he and Boals were in direct contact. Carter feared the talks would be unproductive, but Boals listened intently and offered understanding. The two spoke often and at length. Carter spoke honestly about his initial departure. He talked about his time at Xavier and how it had led him back to Ohio and to Boals.

“Once I got to talk to him, he was probably one of the most understanding people,” Carter said. “He had nothing held against me or anything like that.”

Boals never harbored a grudge against Carter, but he wanted a second opinion before moving forward. He wanted an outside source to tell him if the forward would mesh with the culture Boals had established during his first two years at the helm.

“He left those two, he didn’t leave me,” Boals said. “If they decided that they didn't want him or he wouldn't fit our culture, then I probably wouldn't have taken him.”

Vander Plas and Preston vouched for him without hesitation. The process was expedited from there. Carter committed to Ohio on April 2, 2021, after spending nine days in the portal.

He was back with the Bobcats, but now he was with a coach he wanted to play for.

In a sixth season that he initially never wanted to utilize, Carter is back at the top of his game. He’s second on the Bobcats in scoring and rebounds, and his return to Athens was instrumental in the Bobcats formulating the season that they’ve had.

He takes the good with the bad when looking at his time away from Ohio. He’s still grateful for the connections he made, and he still carries them with him.

Carter still grapples with his perfectionism, however. It’s a constant battle for him to break the habits that nearly drove him away from basketball altogether. Sometimes he’ll slip, but he knows that his teammates and coaches are there for him.

Last season, Carter considered his basketball career at its logical conclusion. Now, he’s one of the cornerstone players of an Ohio team that has a chance to win its second Mid-American Conference Championship under a third-year coach.

He’s not where he expected himself to end up, but Carter isn’t complaining. He’s still playing the game he loves.

“I want him to have his story book ending,” Frayer said.