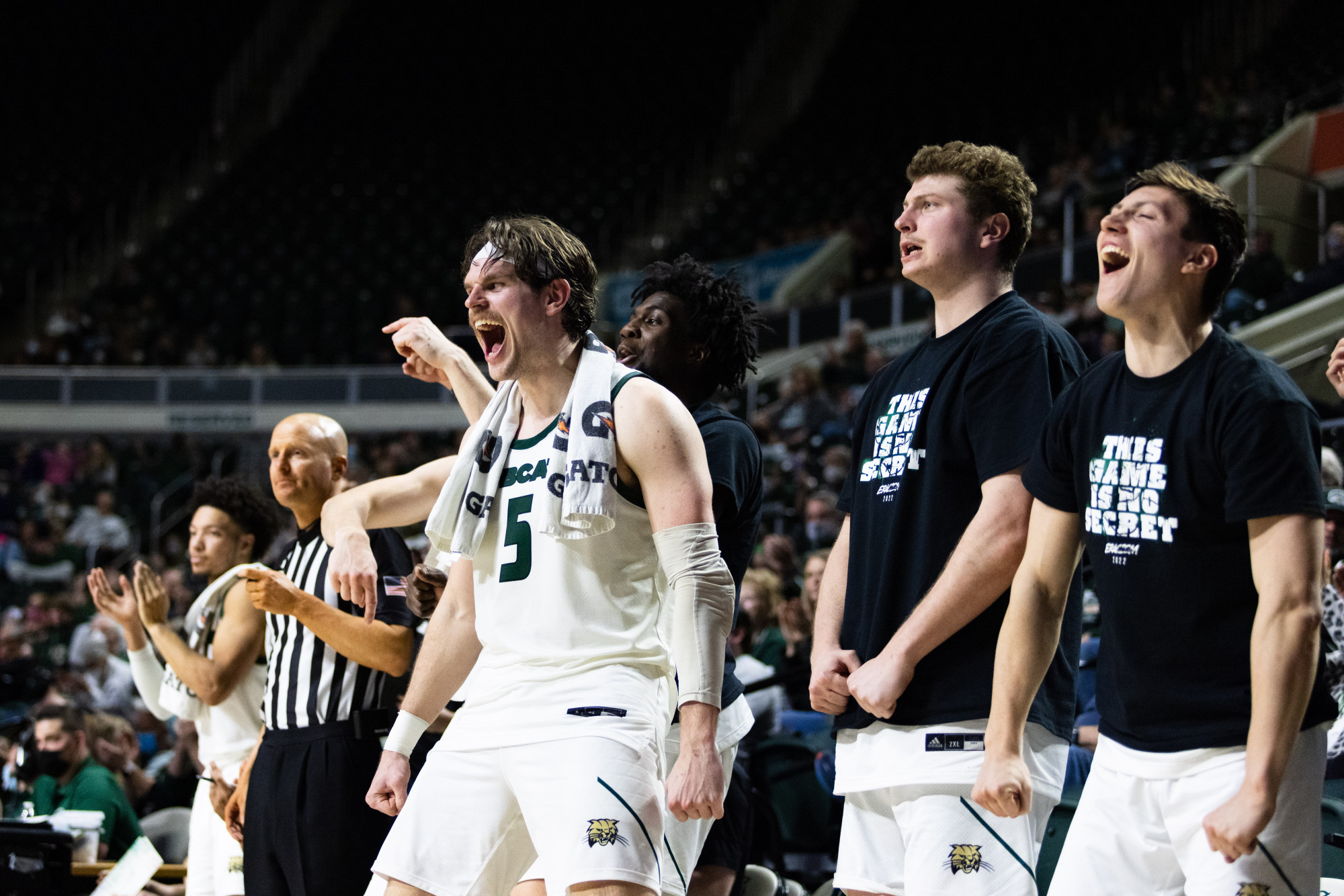 Ohio University basketball bench celebrating after a big play against Ball State at The Convo on Feb. 1st, 2022.

Ohio had massive expectations placed on it before its season even began.

That’s the weight the Bobcats had to bear after winning the Mid-American Conference Championship last March and making a run in the 2021 NCAA Tournament. They knew ahead of time they would be the team to beat.

But with two weeks left in the season, Ohio hasn’t folded under the pressure. If anything, Ohio is within striking distance of what it has yet to collect under coach Jeff Boals: a MAC regular season title.

Ohio is in a good position to become the Mid-American Conference regular season champion for the first time since 2013. It’s not hard to see why. Ohio has stampeded through its conference schedule this season. It’s traded first and second place in the standings with Toledo since MAC play began, and its three conference losses have been against teams near the top of the ladder.

There’s not to say there hasn’t been snags. Ohio wore itself out after an exhaustive two weeks to begin its February slate, during which it played six games in 12 days and spent the second half of that gauntlet on the road. Extended time on the road is never easy, and cramming three games into a single week doesn’t soothe mounting fatigue.

And that fatigue soon reared its head. Losses to Toledo and Kent State put Ohio’s weaknesses on display. The constant turnover from a jam-packed schedule had drained its energy. Its shooting suffered, and its performance before halftime had taken a hit. Over its last five games, Ohio has either trailed or been tied at halftime.

“It was rough last week,” Mark Sears said following Ohio’s win over Miami last week. “It felt like an NBA schedule, you know? Our bodies were hurting, and we just felt like we didn't have enough time to rest.”

But in spite of the fatigue and a handful of hard losses, the Bobcats haven’t cracked yet. If anything, they’re producing like usual. Since their February slate began, the Bobcats average 75.6 points per game. The only time they’ve been held under 70 points were in their losses to Toledo and Kent State.

There’s a light at the end of the tunnel for the Bobcats. The chance to claim the regular season title, and the prospect of making another run in the MAC Tournament, loom large on the horizon. The Bobcats have clambered through February and aren’t much worse for wear. Even after Ohio’s throttling at the hands of Kent State, Boals never stewed on the loss.

Plus, the worst of Ohio’s schedule is over and done with. Its games against Toledo and Kent State are out of the way, and it only had to face preseason favorite Buffalo once this season. The remainder of Ohio’s schedule consists of teams it’s beaten before — home games against Central Michigan and Akron followed by visits to Bowling Green and Northern Illinois.

Ohio won’t have much of a problem at home. The only visitor to come out victorious in The Convo this season is Toledo, who tarnished Ohio’s perfect record at home back in late January. Since then, Ohio has won every home game by 12 points or more.

The only worry comes from traveling. Four of Ohio’s losses have come while on the road, albeit against teams a step over Bowling Green or Northern Illinois. While Ohio’s biggest struggles are while on opposing courts, its final road games are against teams who’ve each dropped their last two home games.

When Ohio last took the MAC regular season title in 2013, it returned to the MAC Championship Game for the second year in a row before bowing out to Akron. Ohio is just as eager now as it was then to be the king of the regular season, but it won’t settle for runner-up.

Ohio expected itself to be one of the top contenders in the MAC this season. That was the expectation set after it won the MAC Championship last March. The expectation is still there, but now, it has the weight of a potential regular season title on the line.