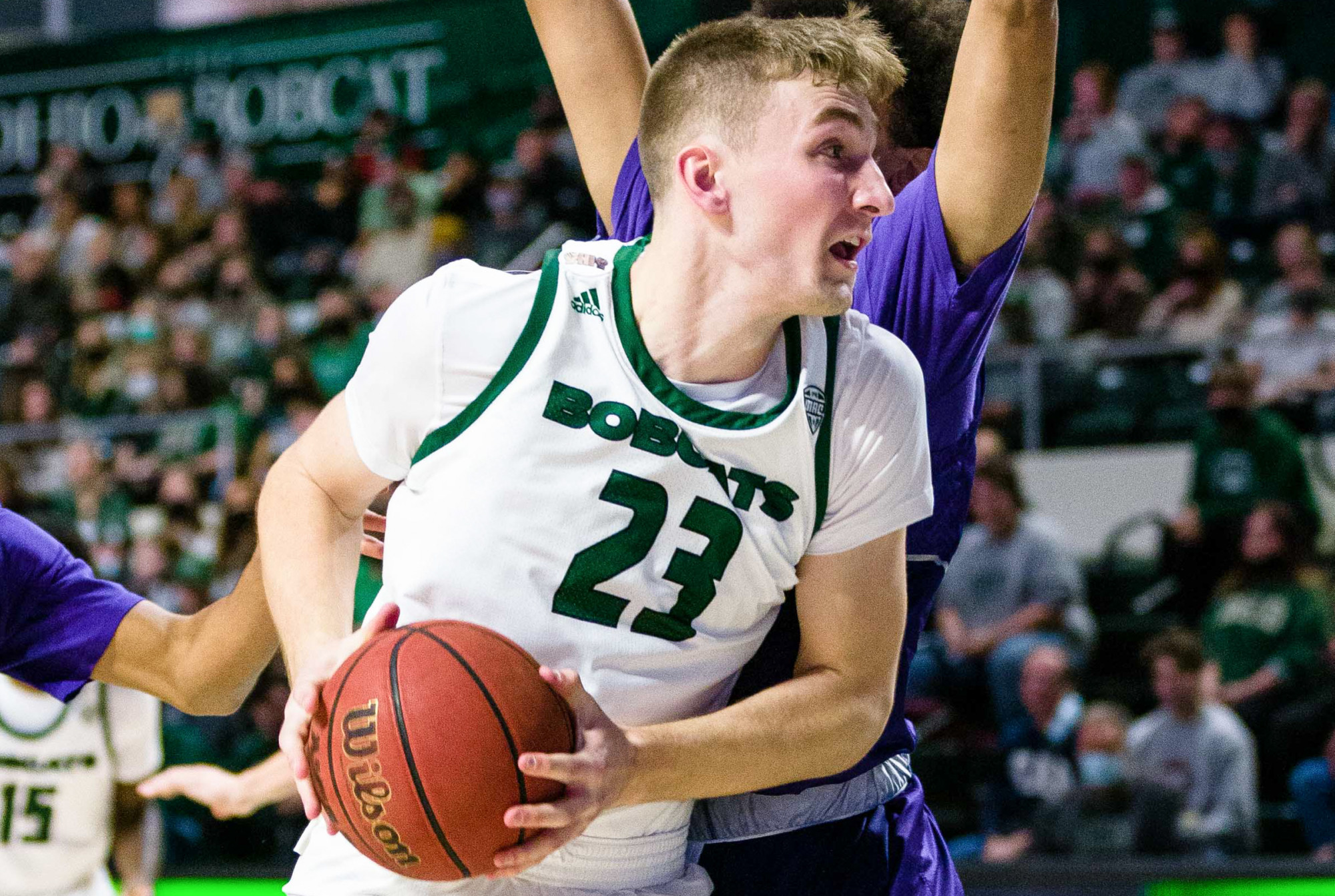 It’s a pull that’s stretched back years. The freshman had always been well-acquainted with the Bobcats. Athens is just over an hour’s drive away from his hometown of Duncan Falls, and he had been attending youth camps hosted by Ohio since he was in middle school.

The pull was so strong, in fact, that Clayton decided to join the team a year ahead of schedule.

For the majority of Ohio’s season, Clayton wasn’t considered a legal adult yet. He just celebrated his 18th birthday Feb. 12, when Ohio battered Eastern Michigan on the road. The freshman is so young because he skipped his senior year at Philo High School entirely to come to Ohio.

“The culture of OU and being a kid from Southeastern Ohio were big parts in why I wanted to come here,” Clayton said.

Even before he announced his commitment in July 2020, Clayton knew Ohio was where he wanted to be. He’d received offers from six different schools, but Ohio felt like the natural choice. It was the first college he visited, and coach Jeff Boals, along with the rest of the coaching staff, took any call they got from him and made sure he felt welcomed while they began the recruitment process.

It only made it better that he’d remain in Southeast Ohio and be able to stick close to home.

“He would always call us,” Boals said. “Every time we talk, it'd be a 45-minute-to-an-hour conversation, just talking about whatever, whenever.”

Clayton wanted to come early, but he wasn’t sure if he’d be able to. Ohio had limited scholarships to give out and wasn’t able to grant him one at the time. Clayton could have attended a prep school in the meantime, but Boals told him to wait and see if something opened up.

Sure enough, a scholarship soon opened. Clayton would be able to come to Ohio early, so long as Philo approved the move. The Franklin Local school board assembled a committee to evaluate Clayton, and the complete process took less than a day. Clayton was approved to graduate early, and all he had to do was take two additional English classes to meet the requirements.

Now that he’s made the jump, Clayton feels more at home than ever. He’s adapted well to his first season with the Bobcats. He hasn’t been thrown into the starting lineup or shattered any records, but Clayton can dependably come off the bench for a few minutes at a time and drill a 3-pointer.

A reliable 3-ball is what Clayton has become known for. He has the fourth-best 3-point percentage on the roster. While he’s never quick to shoot — he’s only had two games where he’s made more than four 3-point attempts — Clayton doesn’t need to rattle off shots. He’s brought in to knock down a few shots while the starters rest.

The freshman didn’t even expect to play this season. He figured he’d redshirt until he grew accustomed to Ohio’s system before stepping into a larger role.

Standing at 6-foot-8 and 225 pounds, Clayton is one of the biggest players on Ohio’s roster. He’s got a long reach and a sturdy frame. He models himself after Jason Carter, whose frame lines up with Clayton’s nearly down to the letter.

The one thing he didn’t have, though, was the years of experience. Going up against seasoned veterans both in practice and in games wore him down and whittled at his confidence.

“The tough thing for him coming in was confidence, self-confidence,” Boals said. “Sometimes, it was hard for him to comprehend that, but he's had a great attitude. He's had a great work ethic since day one.”

Clayton’s age catches up with him in other ways. When he first moved into Athens in June 2021, he realized he was going to be the young man among veterans. Many of his teammates had been at the youth camps he had attended, and Carter had even played in a high school tournament hosted by Philo when Clayton was in sixth grade

“It was kind of weird to get here, and he was back,” Clayton said. “It was like I watched him when I was in sixth grade and, now, we’re teammates. It was kind of the first thing we talked about.”

As young as he is, Clayton melded to Ohio’s program with ease. He’s grafted his skills from high school into college almost seamlessly, and progress is already beginning to show. He’s one of Boals’ favorite players to bring off the bench, and he averages over 10 minutes per game.

Clayton picked Ohio because he felt a connection. Ohio picked Clayton because it saw potential.