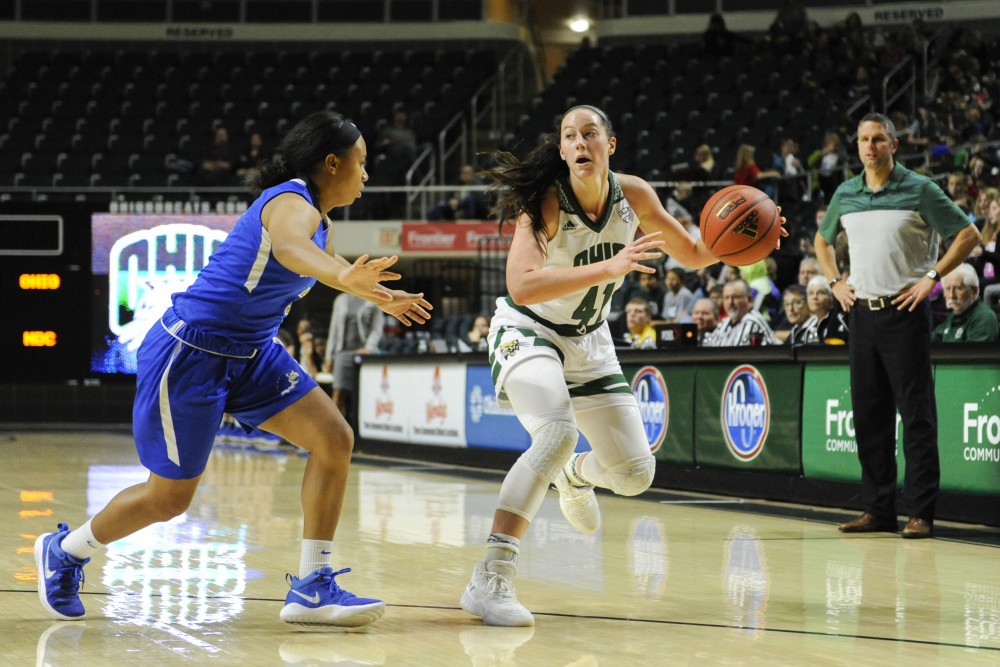 Ahead of the Curve

Ohio freshman forward Gabby Burris (#41) tries to get past a Notre Dame College defender in the second half of the Bobcats' win on November 16.

Just minutes before, she had gashed Ball State — in her first career start at Ohio — for a career-high 19 points and eight rebounds in the Bobcats’ victory.

When asked about when she no longer felt like a freshman anymore and when she was grown-up, Burris answered.

Burris, a Baltimore, Ohio, native, has played a pivotal role for the Bobcats’ success in Mid-American Conference play; she’s doing as being just a freshman.

Her success was to be expected by anyone who watched her or knew of her in high school; at Liberty Union High School, she was the Associated Press Ohio Division III Player of the Year in 2017 and averaged 24.8 points per game and 11.6 rebounds per game after suffering a knee injury during her junior year.

But that was high school. Being the best player on the high school team doesn’t always translate into a college gym. For Burris, however, that success is translating to The Convo.

“Gabby’s a great competitor,” redshirt senior Taylor Agler said. “Coming into college, that’s one of the biggest things is the competition level and the speed of the game just increases, and it’s been an easy transition for Gabby because she is an unbelievable competitor and she loves playing hard.”

That competitive nature that Burris possesses started out earning her a reserve role; she came of the bench in each of the first 20 games. In her first 13 games, she scored over double-digits only four times.

In the 11 games since, though, she has scored in double-digits seven times. In that span, she’s averaging 11.4 points per game. She has taken on a new role, as well. Burris is now a starter as a true freshman, alongside fellow starter and freshman Cierra Hooks.

For Agler, who is the only senior on the team and is largely considered the leader on the floor, it’s easy to teach Burris. Agler knows Burris will listen and do what she’s asked, as well as do her part to make the team successful.

“Having teammates (like Burris) that want to play really hard all the time, that’s just one less thing you have to worry about,” Agler said. “Anyone that makes mistakes, but they’re trying their best and trying their hardest, that’s an easy fix.”

Burris has been crafting her game all season, getting better as time has passed. There was never a time when she thought she was going to earn valuable minutes in the rotation, or even start, this season. She expected nothing and continued to work hard. It paid off.

But in the midst of traveling for a full MAC schedule for the first time while managing classes, Burris isn’t worried about hitting a “freshman wall” and losing production on the court. She just goes about her day.

Whatever her day consists of is working. When it was time for her to start her first game, she was sitting on the bench, waiting for her name to be called as the starting lineups were announced. It was different than her usual position behind the bench, cheering on the starters. But that’s OK.

She’s been making plays for the Bobcats all season, but that’s the day she grew up.