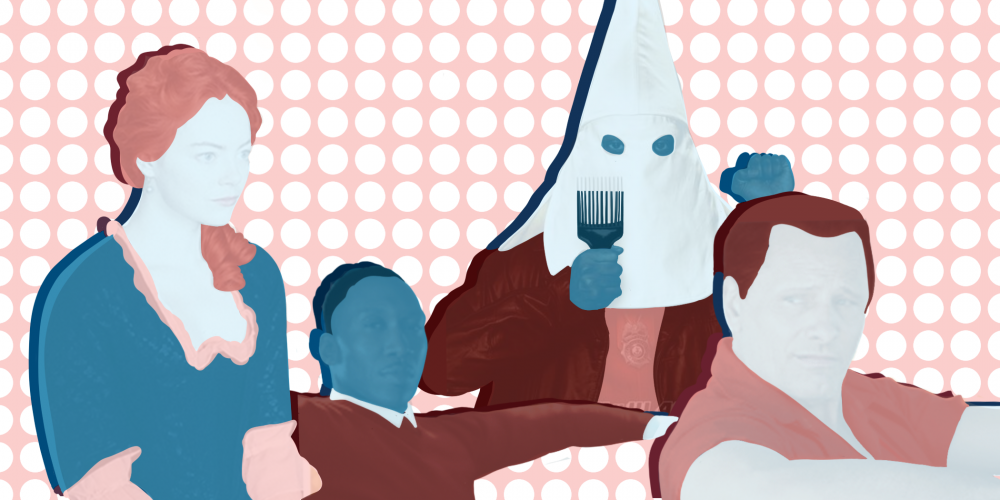 Based on a True Story

Based on a True Story: Filmmakers find ways to tell people’s stories in three hours or less

Before Green Book’s title appears on screen, five words pop up: “Inspired by a true story.”

A variation of that phrase appears before Adam McKay’s Vice: “The following is a true story. Or as true as it can be given that Dick Cheney is known as one of the most secretive leaders in history. But we did our f--king best.”

Those words and phrases presented before most biographical pictures — films that tell the story of someone’s life — have different connotations, especially to the producers who front the films, said Ayesha Nizhoni, a third-year master’s of fine arts student studying film at Ohio University.

No biographical picture, more commonly known as a biopic, is 100 percent factual. The chronology is condensed, actors portray real-life people and conversations are often made up. It’s called creative license. Like with any film, a biopic is not to be taken as fact; its sole purpose is to entertain and make audiences think about what is being presented.

From real life to the big screen

Biographical subjects cover people from different aspects of life. Some biopics are about musicians, political activists and movie stars. Most tell the stories of people we are already familiar with — Freddie Mercury and Dick Cheney, for example — so the audience is already invested in the story because people feel they know the subject from many Google searches, Nizhoni said.

“For a while … (audiences) were so caught up in fantasy and comic book stories, and there wasn’t a lot of biopics. Everyone was sort of ignoring reality. I think that pendulum is swinging back the other way, and people are much more interested in figuring out what’s going on and that’s why they’re looking more at real life stories.”Eric Williams, professor of media arts and studies

“It is something that I think we as humans respond to because I think it’s narcissism,” Nizhoni said. “We all wish our stories could be told.”

Green Book and Vice are just two of nine biopics nominated at the 91st Academy Awards set to air Sunday. The number of biopics nominated by the Academy has fluctuated, but the percentage of nominations held by the subgenre is at its highest in 10 years. Those nine films alone comprise nearly 36 percent of this year’s 121 total nominations.

The genre’s popularity is not restricted to Academy voting but a result of a larger cinematic trend, said Eric Williams, an OU professor of media arts and studies.

List of biographical pictures nominated at the 91st Academy Awards

“For a while … (audiences) were so caught up in fantasy and comic book stories, and there wasn’t a lot of biopics. Everyone was sort of ignoring reality,” Williams said. “I think that pendulum is swinging back the other way, and people are much more interested in figuring out what’s going on, and that’s why they’re looking more at real-life stories.”

When a screenwriter chooses which person’s life to demonstrate in a biopic, the writer has to determine what genre of film that person fits, Williams said. That is achieved through research and figuring out which parts of someone’s life to include.

In the case of Vice, it is clear McKay was aiming for satire to highlight the ironic political rise of Cheney. During the research process, the filmmaker will eliminate the sections of someone’s life that don’t necessarily fit the scope of that story, Williams said.

“It’s kind of like adapting a novel,” he said. “You kind of look at somebody’s life history and figure out what part is the Hollywood movie chunk that fits into that paradigm.”

If a filmmaker’s biopic is not about someone’s fame, they might use real-life events to tell a general story. Though he had not seen Green Book yet, Williams said the movie’s purpose might be to make general observations about relationships. The goal is not to get every detail right, but to fill in information between real events.

“As a storyteller and as a screenwriter, I would approach it that way: ‘I know this is true, and I know that is true. The points in between are just how do these men become friends,’ and I can just make that stuff up,” Williams said.

Green Book is a lesser-known story, so toying with the facts would have been easier for that film. With Vice, there are books, interviews, articles and other documents discussing Cheney’s reign as vice president.

The conversations and events in Vice didn’t happen exactly as portrayed in the film, but the essence of the events did, Williams said. That’s what filmmakers aim to do: Give a summary of someone’s story rather than rehash every moment, he added.

The battle with accuracy

K.S. Keeney, a second-year master’s student studying film at OU, said there are two ways to craft a biopic. A filmmaker can conduct research to grasp what the person was like, or the filmmaker can use a time period and characters as a setting to tell their own story.

The latter is the technique used in the period drama The Favourite, which tells the story of Queen Anne (Olivia Colman) and her favourites, Sarah Churchill (Rachel Weisz) and Abigail Hill (Emma Stone). Screenwriters Deborah Davis and Tony McNamara and director Yorgos Lanthimos use the real-life people as a vessel to tell the story of a lesbian love triangle and female power struggles.

“The thing I like the most about The Favourite is it's perfectly fine with acknowledging its own anachronism,” Keeney said. “It’s not attempting to portray this as any sort of accurate interpretation of these people or these events.”

One of the most contentious films of 2018 is the Oscar-nominated Green Book. The movie tells the story of Tony Vallelonga (Viggo Mortensen), an Italian-American who drove a car for black pianist Don Shirley (Mahershala Ali). The film paints the relationship of Shirley and Vallelonga as one of friendship. Shortly after the film came out, members of Shirley’s family said their relationship was that of an employee and employer.

Fundamentally, Green Book is about racial and sexual identity. It seems Ali’s character has more cultural relevance, Keeney said, yet the story was co-written by the real-life Vallelonga’s son, Nick Vallelonga, thus told from the lens of Vallelonga.

“It's not the real person, but it's sort of an idealized version of this type of person that you would have seen,” Keeney said. “It's ... the fact it's being written by his son that feels a little disingenuous to most people, especially on behalf of Don Shirley. This is (Shirley’s) story in some senses — his story of what it is to be black in the South.”

Keeney thinks a film like Green Book won’t happen again because it’s unusual to have someone who was so intimately tied to the real-life subject matter write the film. A screenwriter typically works with those people or a biographer to craft a narrative.

“On top of that, it's an all-white creative cast that has a vested interest in making the white character look good,” Keeney said. “They're not washing over the fact that that was a bad time to be black and a bad time to be gay, but they are washing over the fact that Tony Vallelonga probably wasn't immediately OK with his new best buddy being a black gay dude. That's, I think, the disingenuous part.”

Who gets to tell the story?

Biopics always mess with the chronology of a person’s life. It’s a necessity when making a movie that is fewer than three hours long. The filmmaker has to take someone’s life or a period of their life and condense it into a viewable movie that won’t take three years to watch, Nizhoni said.

“I think when you get into a gray area is when, in the case again of Bohemian Rhapsody, you sanitize the subject to the point where it is unrecognizable to the people that know that subject really well,” Nizhoni said. 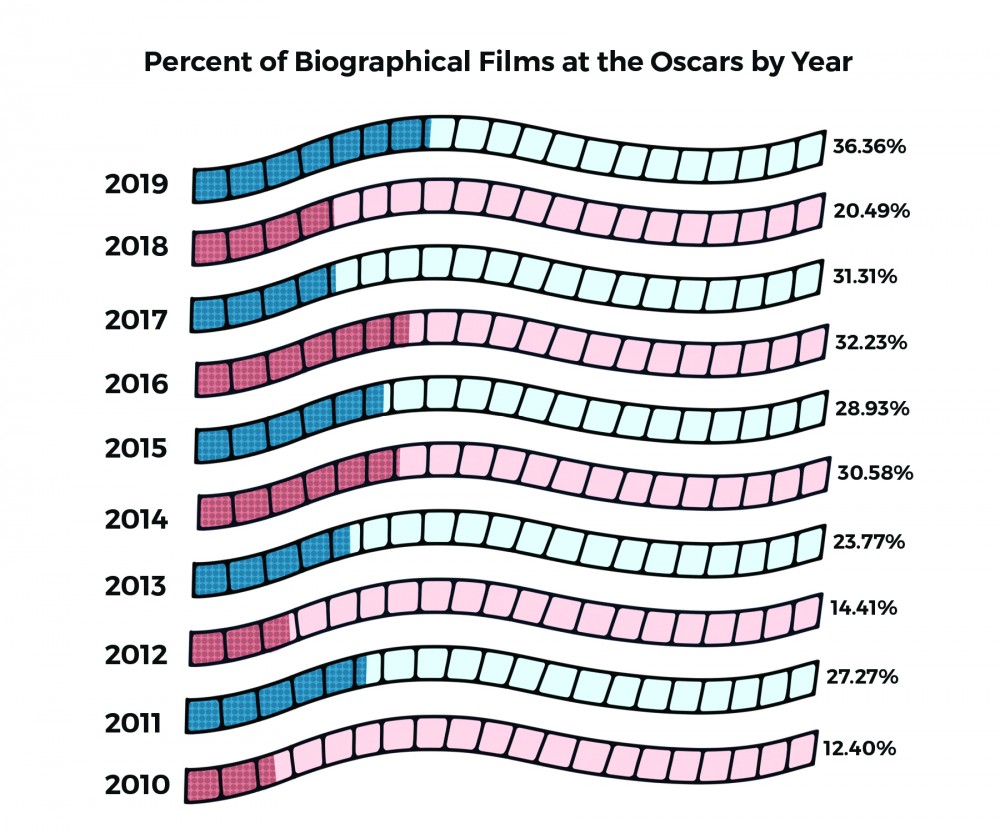 Bohemian Rhapsody tells the story of Queen frontman Freddie Mercury (Rami Malek). The film purported itself to be about the band as a whole, but it focuses on the theatrical Mercury.

The creative team of Bohemian Rhapsody consulted with guitarist Brian May and drummer Roger Taylor. But Mercury died in 1991, so anything about Mercury in the biopic was hearsay — even the aspects people think are fact, Nizhoni said.

In a review from Pitchfork, Kristen Yoonsoo Kim discusses the straight-washing in the film. Though Mercury never publicly talked about his sexuality, he had a longtime lover, Jim Hutton. The majority of the film, though, focuses on his relationship with Mary Austin.

“The film also manages to rob Mercury of nearly all his queer pleasures,” Kim writes in the review. “For those worried about the straight-washing of the singer or the erasure of his battle with AIDS, Bohemian Rhapsody does explicitly label him gay and diagnoses his cause of death. It’s just the portrayal of his gayness that’s troubling.”

When it comes down to it, the person who gets to tell other people’s stories are the ones with the most money, said Akil Houston, an associate professor of cultural and media studies at OU.

“That’s why it’s such a challenge for independent filmmakers to be able to not just make a movie, but be able to tell it with a vision in mind because it’s easier for the other filmmaker to get money and get that film shown,” Houston said. “If you wanted a film chock-full of stereotypes, whatever those might be, … there's an audience for it. If you’re wanting to push and change, it’s probably going to be a lot more challenging.”

Biopics can also rewrite history in a way. We live in an era where people consume information quickly, Houston said. With Freddie Mercury, Houston said there are many layers to his history and personality that there is no way a film can capture all of it. A book based on original source material can provide those nuances. But instead of reading a book about Freddie Mercury, people turn to Bohemian Rhapsody to get a two-hour history lesson.

“Depending on who gets to tell that story, it can have huge political ripples,” Houston said. “Whoever is telling the story has a great deal to say about the future of how we think about it.”