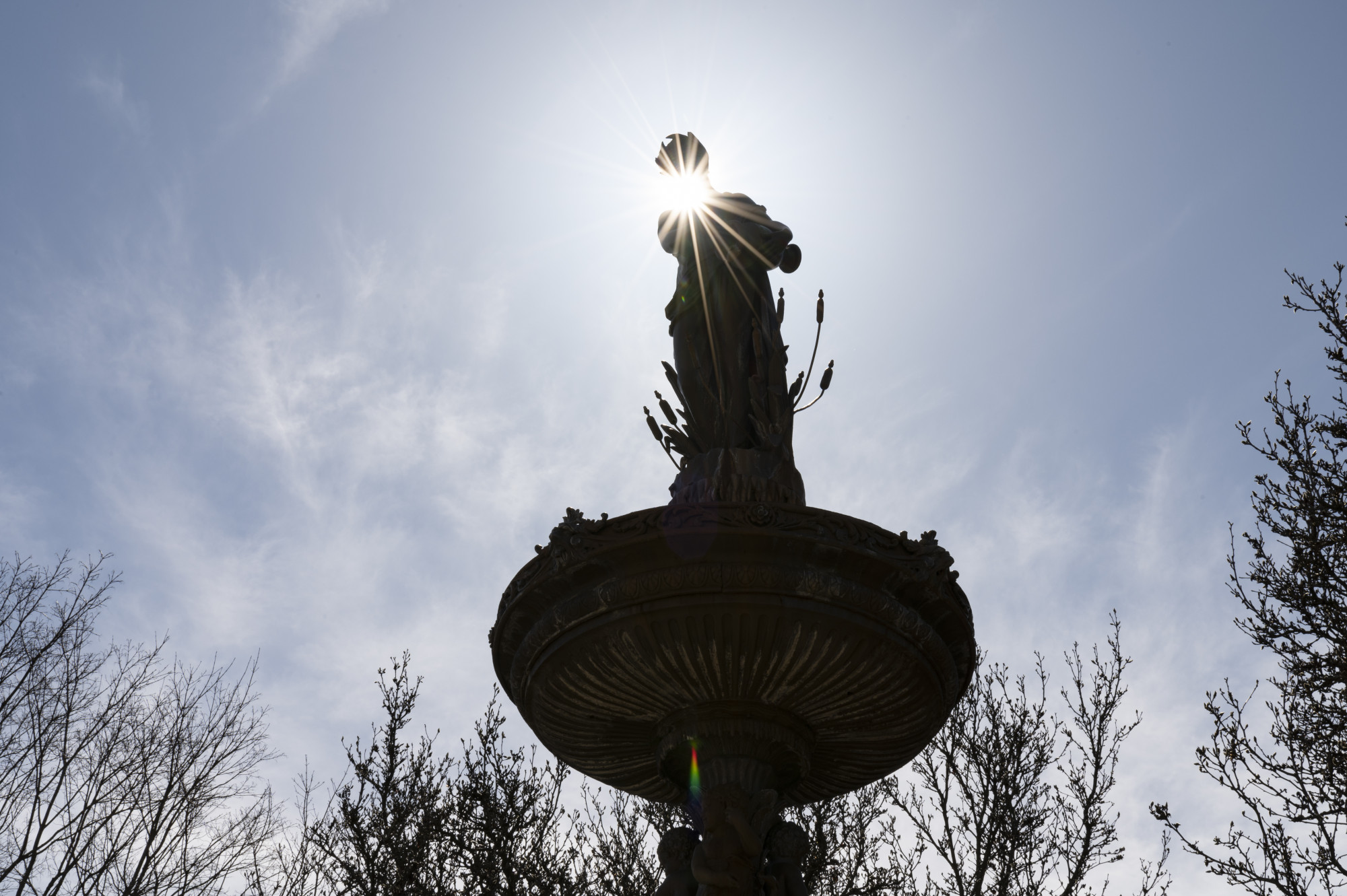 A large fountain featuring three tiers of sculptures sits in the middle of Fountain Square, Lancaster, Ohio, on April 10, 2022. Fountain Square was dedicated as a Raymond Brandt Martens Memorial site by the Lancaster Board of Park Commissioners on July 17, 1890.

Bringing Art to the Outdoors

When artist David Griesmyer’s daughter asked him to make her a dragonfly, he crafted one with wings that reached 12 feet long, forming a gigantic sculpture that he placed in the middle of a local park, inviting guests to admire it.

The buzz that this one piece garnered inspired David Griesmyer, as well as his business partner and sister-in-law, Rebekah Griesmyer, to create more sculptural pieces and place them in public areas around Southeast Ohio.

This eventually formed the nonprofit organization called the Ohio Art Corridor, which was officially formed in 2018. The organization consists of numerous outdoor art installations that stretch across Southeast Ohio for any and all individuals to visit. 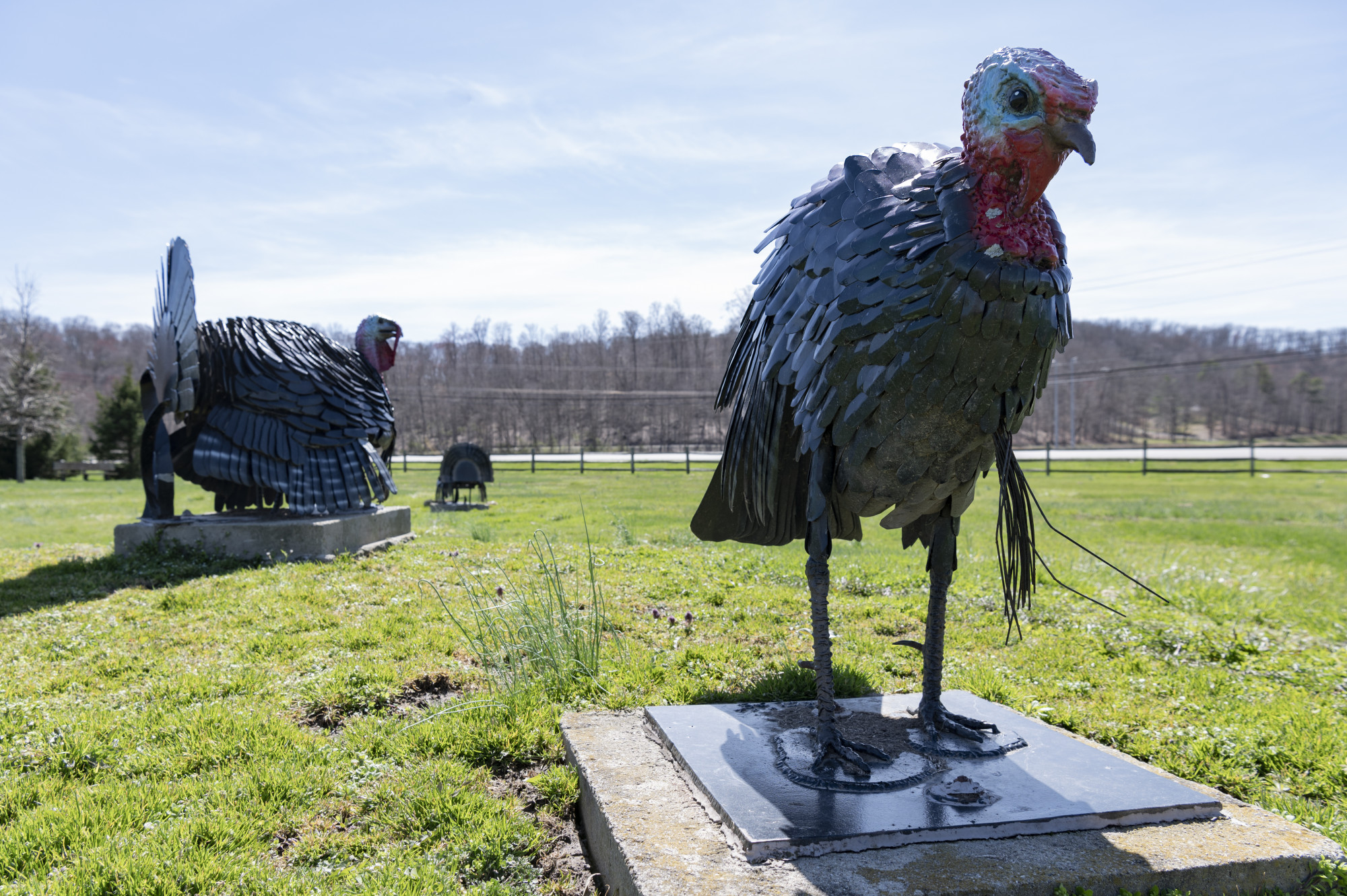 Three scultures of a wild turkeys sit in Flight of the Hawk Park in Lancaster, Ohio, on April 10, 2022. The turkey scultures, along with other sculptures of native Ohio wildlife (like turkey vulture, black vulture, white-tailed deer and a giant red-tailed hawk) were created and donated by nationally-known artist Ric Leichliter, who is a resident of Fairfeild County, in 2006.

In order to make this idea come to life, Rebekah Griesmyer said it involved a lot of collaboration. Several town mayors, including Athens’ Mayor Steve Patterson, had a roundtable to discuss the logistics.

“We pitched this idea to them about creating a corridor that people could travel at their leisure and see art that was free and accessible to the public,” Rebekah Griesmyer said. “And along the way, they could enjoy the things that these little towns in Southeastern Ohio have to offer.”

The purpose, Rebekah Griesmyer said, was to not only provide and elevate the culture within these regions but to also encourage tourism and bring new avenues of revenue to the impoverished towns.

David Griesmyer said these areas, including Ohio University, are also special as they have direct connections to the creations of the sculptures. 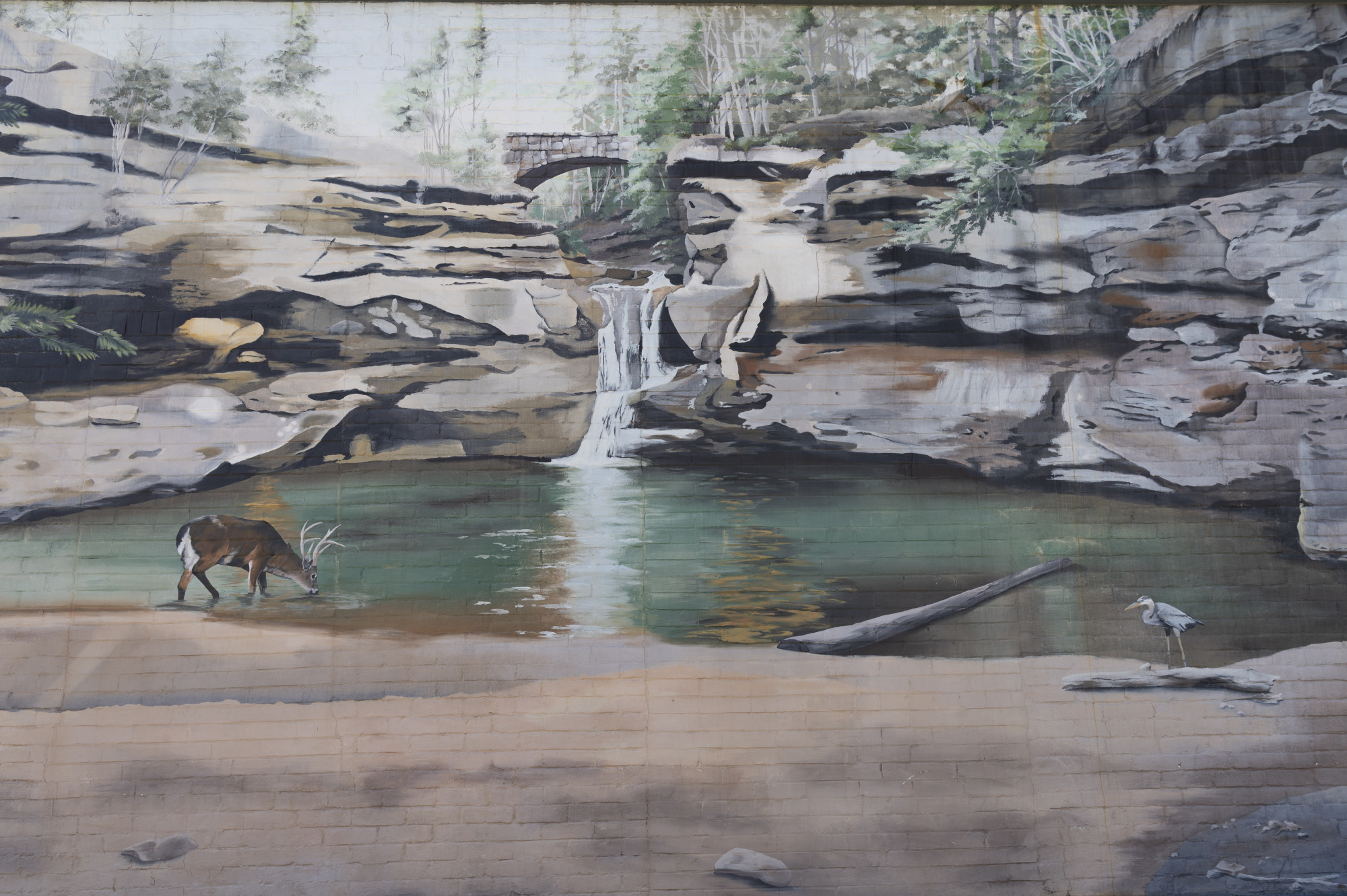 A mural of a deer and crane in a pictureque forest is diplayed in downtown Logan, Ohio, on April 10, 2022. The mural was dedicated as part of the Logan-Hocking Chamber of Commerce Downtown Mural Project on November 16, 2006. 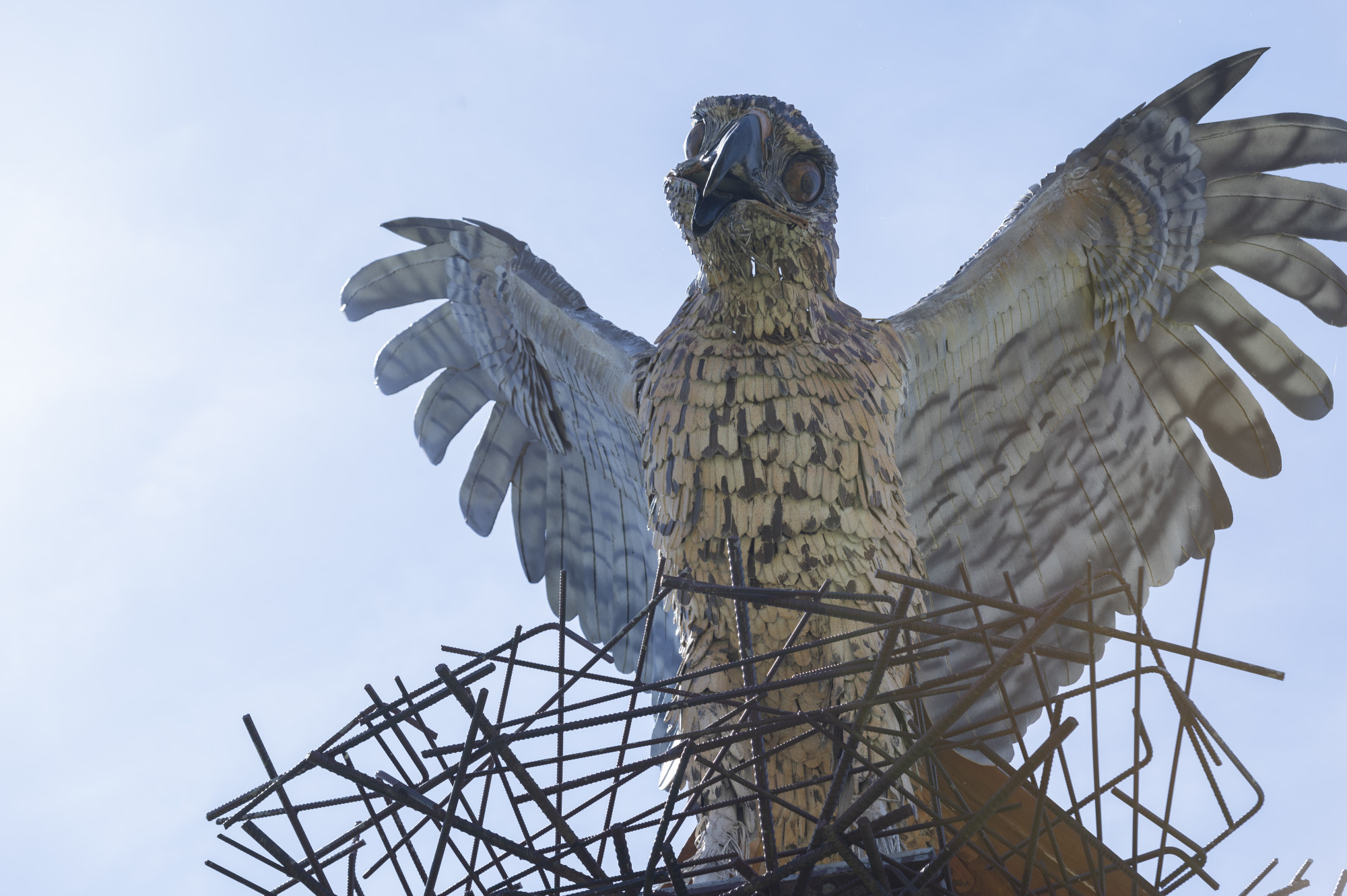 A giant sculpture of a red-tailed hawk, titled "Flight of the Hawk," perches in its nest high above Flight of the Hawk Park in Lancaster, Ohio, on Sunday, April 10, 2022. The hawk has a 14 foot wingspan and sits 42 feet above the park. "Flight of the Hawk," along with other smaller sculptures of native Ohio wildlife (like turkey vulture, black vulture, wild turkeys and white-tailed deer) were created and donated by nationally-known artist Ric Leichliter, who is a resident of Fairfeild County, in 2006.

“We've had communities donate properties for us to be able to put the sculptures out on,” David Griesmyer said. “We've had companies that have donated the raw materials to make the sculptures. And now we have the universities which are getting involved that are wanting to enroll their students and helping them learn how to create these large items. It's just been a blooming effect to see people want to be a part of it.”

The creations, while open to artistic visions, follow a set of criteria to be considered within the corridor. The pieces must be outdoor and they must be over 12 feet if a singular structure, or if it is under 12 feet, there must be three distinct pieces to form a sculpture park. However, Rebekah Griesmyer said the most important criterion is that the pieces are free and accessible.

The installations currently extend across 150 miles of the Appalachian region, showcasing unique art at all times of the day. The unique pieces, from the foundational School of Fish sculpture to the newly-added Locks of Love sculpture, are each planted around Athens, Circleville, Lancaster, Portsmouth, McConnellsville and Zanesville.

Jonett Haberfield is the executive director of Visit Fairfield County in Lancaster, Ohio, which is the tourism site for the county. Haberfield works to promote the various trails that the Ohio Art Corridor features in the Lancaster area, including the Flight of the Hawks. 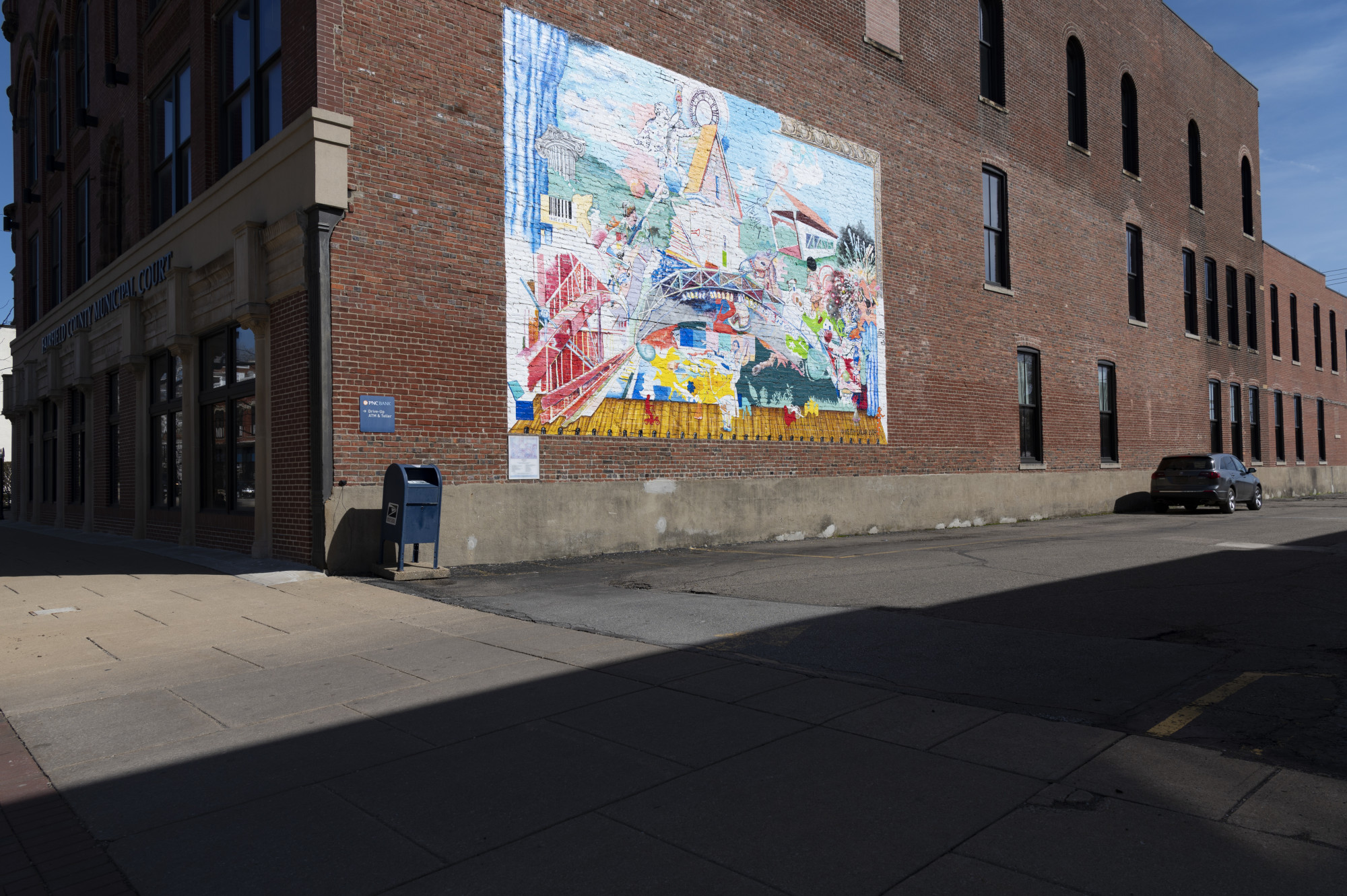 Keith Sklar's "Opus 20" is displayed on the side of a brick building in downtown Lancaster, Ohio, on April 10, 2022. Keith Sklar donated "Opus 20" as a gift to the people of Lancaster during The Lancaster Festival. The mural depicts a stage with various figures and buildings, hinting to various aspects of and events in Lancaster.

Haberfield said the sites are visited frequently and are enjoyed by tourists.

“We think it's great that they've stitched together things across Southeast Ohio, and they're raising awareness of public art,” Haberfield said. “The fact that they came up with this idea to … be able to drive all over Southeast Ohio and see all of this art. It's hard to find that kind of stuff, and they've put it all in one place, which is really nice.”

“We think it's great that they've stitched together things across Southeast Ohio, and they're raising awareness of public art,” Haberfield said. “The fact that they came up with this idea to … be able to drive all over Southeast Ohio and see all of this art. It's hard to find that kind of stuff, and they've put it all in one place, which is really nice.” —Jonett Haberfield, executive director of Visit Fairfield County in Lancaster, Ohio

The desirability of the corridor was emphasized especially during the COVID-19 pandemic, David Griesmyer said, underscoring the value of the trail’s accessibility and scavenger hunt-like concept.

“When people were all in their homes and a lot of people were just getting their cars just because they wanted to be out, they would drive,” David Griesmyer said. “This was a beautiful opportunity for us to start developing ways for people to have destination points to visit and to experience things.”

Throughout her time working with the organization, Rebekah Griesmyer said it has allowed her to connect with other individuals across the regions who share the same passions and visions as her and David.

“I've met the most wonderful people that have gone to places that I otherwise wouldn't have visited,” Rebekah Griesmyer said. “That's really exciting. It helps keep the momentum going.”

Throughout the several creations that have already been made and the many more in the works to expand the trails even further, David Griesmyer hopes to see more artists participate in these creations to continue to underscore the significance of the regions.

“I think the Ohio Art Corridor is trying to … bring a spotlight on Southeastern Ohio, which … I think has been neglected,” David Griesmyer said. “I think it's a beautiful opportunity to see and to show them that this is possible.”