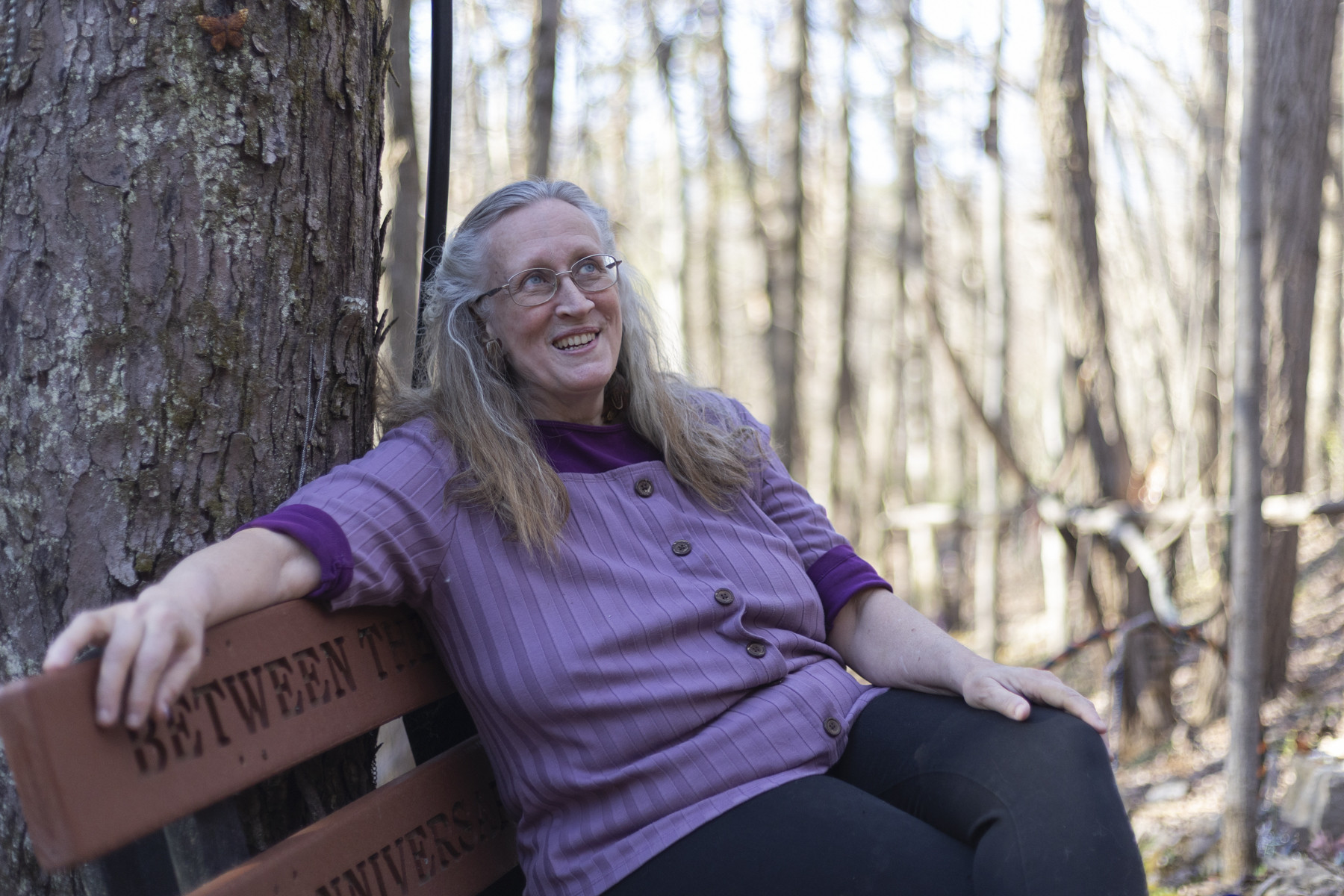 Charlene Suggs sits in the Fairy Garden in Wisteria in Meigs County Ohio. The Fairy Garden is a unique part of the property as it holds memories for many people spanning almost 26 years. Sun. April 10, 2022.

Paola Munoz, Charlene Suggs and Laura Farrell chose to live differently. Rather than relying on a physical structure to define their “homes,” Munoz, Suggs and Farrell sought out living experiences that prioritized environmental sustainability at the scale of the household.

Although the three resided in Athens decades apart, they each participated in an intentional living endeavor – at the Ohio University Ecohouse, Wisteria Community or Acme Co-op – during their time in Southeast Ohio.

Intentional communities have long been a part of life in and around Athens. But during the pandemic, existing intentional living endeavors, like the Ecohouse, provided residents with unique social benefits.

“I did my master's in environmental studies, so I did have classmates that had similar thoughts to me, but because of COVID we were all in a virtual environment, so after class, (I) didn't have that unofficial experience to communicate with others, to learn about others,” Munoz said. “But, the Ecohouse gave me that opportunity and I really appreciated it.”

From fall 2019 until spring 2021, Munoz lived in the Ecohouse, an OU-founded residence that promotes sustainability education and living habits for three students each year, according to the Office of Sustainability. Located half a mile off of Richland Avenue, the Ecohouse is a split-level brick home with a dark stained door and large yard. Some sustainable initiatives are built into the home, such as a 2.4 kilo-watt solar array and an established compositing system, while others are implemented by residents.

Living in the Ecohouse, Munoz formed “close” friendships and developed a network of accountability for her daily actions.

“We're all students, sometimes we don't have time, sometimes you want to cheat and you want to do something easier or faster for yourself or for other people, but living in a more sustainable community environment, they really don't like you to cheat and that's really cool,” Munoz said. “We're all improving … all together.”

Ecohouse members even collaborated to make changes in their own habits for the benefit of the environment.

“For example, one roommate really wanted to eat energy bars,” Munoz said. “Instead of that, we made energy bars together, so he reduced the packaging that he was using.”

In the 1990s, similar environmentally-conscious living was taking place in the Acme Co-op, an affordable student housing cooperative. 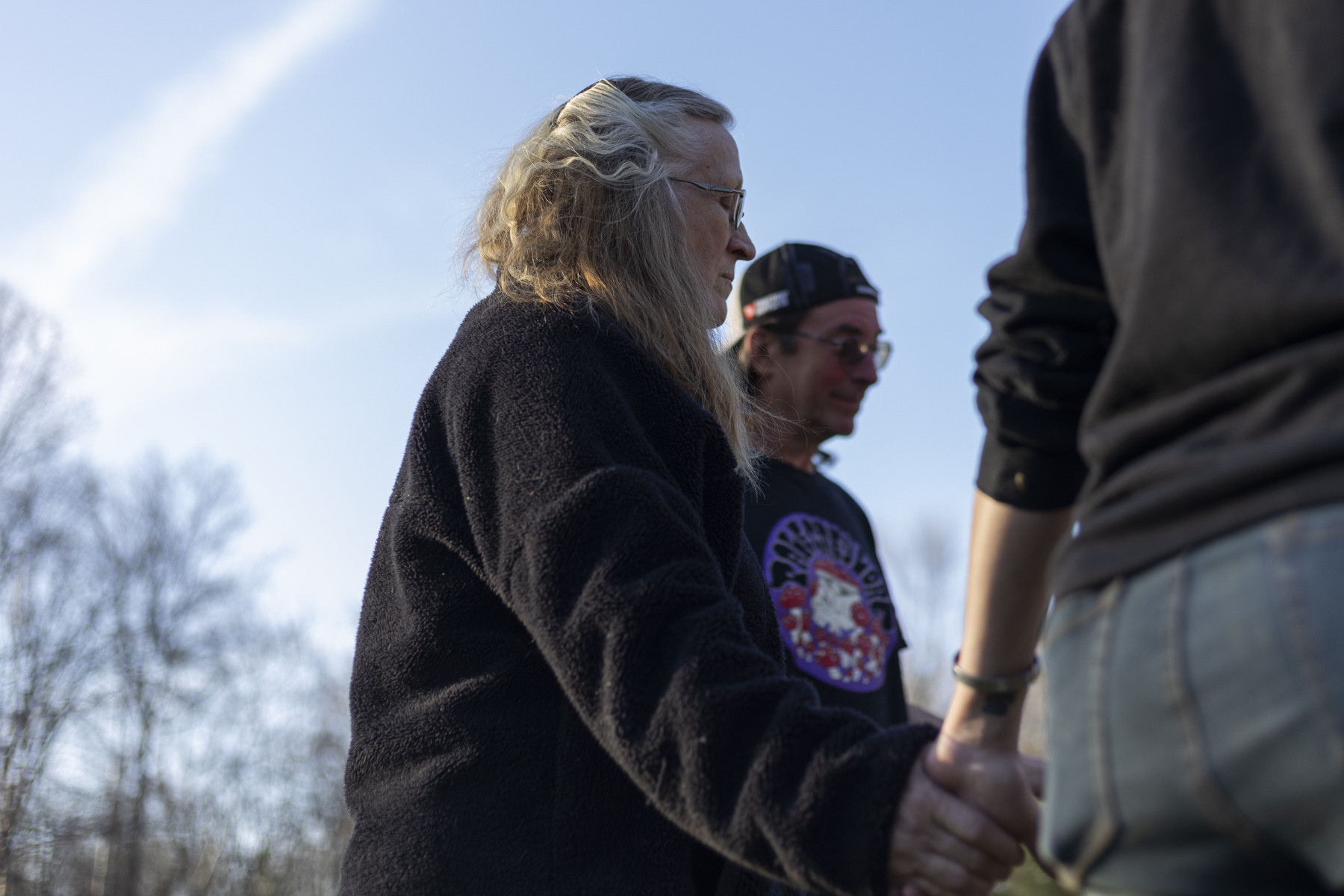 Charlene Suggs holds hands with the employees at Wisteria as they welcome in the season at their community pot luck on the Wisteria Property in Meigs County. Sun. April 10, 2022.

“We always tried to have a growing yard, we composted food scraps, we were good at recycling and trying to do the basics, in my mind, of sustainable living,” Farrell, a former resident of the co-op, said.

Like Ecohouse and Acme residents, members of the Wisteria Community are mindful of their impact upon and relationship with the Earth.

Halfway between Athens and Meigs County, Wisteria is a cooperatively owned and operated land-based community and business. Situated atop a now defunct coal mine, the Wisteria Community promotes healing for its residents and the land.

“It’s just this beautiful beauty of this region,” Suggs, one of the primary founders of the Wisteria Community, said. “To see it recovering is just encouraging. You could come here without noticing telltale signs, most people can’t tell that it was strip-mined, so for me it's daily encouragement of how much intelligence this planet can recover and heal itself. I see that in every flower and tree and walk and it's beautiful.”

From Meigs County to the city of Athens, residents of Southeast Ohio have interacted with each other and their environment in diverse ways over the years. Three women sought out to do so mindfully, through intentional community participation with the Ecohouse, Wisteria Community and Acme Co-op.