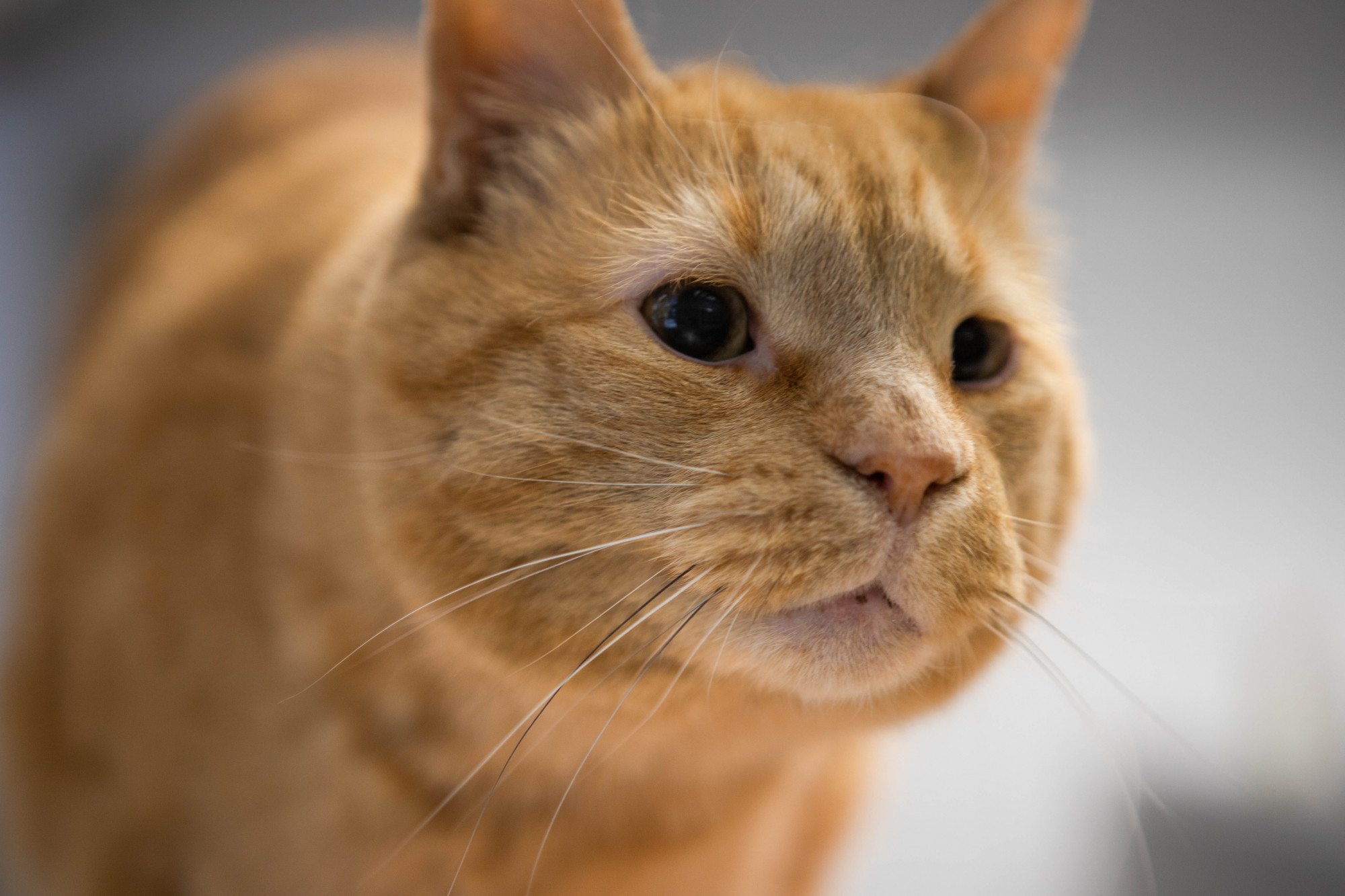 Pumpkin, the resident cat home to the Board of Elections office on Court Street.

Pumpkin and the Polls

Athens prepares for the first election after students return

N aturally, many Ohio University students become concerned when they don’t see Athens’ favorite chubby orange icon in the window of the County Board of Elections office, but there is no need to worry.

Pumpkin is at “kitty camp” this time of year.

Every year during the election, Pumpkin heads off to kitty camp at Kroner Animal Care, Debbie Quivey, director of the Athens County Board of Elections, said. Elections make him nervous, Quivey said, with all of the people and equipment streaming in and out of the office around Election Day. Because of Pumpkin, many students make their way past the Board of Elections to catch a glimpse of him basking in the sunlight on his bed near the window.

How many students make it to the polls because of Pumpkin is a mystery, but he is only one factor of many that affect students registering to vote in Athens as well as those getting in their vote in their hometown.

Students are the only group that has the right to choose between two places, Quivey said.

Sarah Poggione, a professor of political science and an associate dean at Ohio University, said this can affect where students decide to vote.

“There are some options that folks can think about in terms of their residency, and that disproportionately affects young people here in Athens,” Poggione said. “They really may be more connected to the local politics in their home community in some ways ... They might really consider Athens their home community. They could potentially have a big impact on outcomes.”

Although the Board of Elections doesn’t keep specific records on how many students vote each year, Quivey said she has noticed trends over the years of working in the office.

“Students always come out and vote heavy during a presidential (election),” Quivey said. “Now, that didn’t happen here last year because of the pandemic because the students were not here.”

According to a previous Post report , overall voter registration in Athens County this year only slightly declined from the 2020 election, with 38,960 voters registered this year and 39,342 registered in 2020. However, around 2,000 more voters were registered in 2019: 40,919, according to the Ohio Board of Elections website, before the COVID-19 pandemic sent OU students home and added a complex layer to elections in 2020.

Poggione believes more students who may have voted in Athens during a typical school year were more likely to vote in their hometowns because of the pandemic.

“They might have had a different relationship to Athens, and that's going to mean that registration will need to change if they're planning on voting and considering voting here in Athens this time around,” Poggione said.

In off years in which there is not an election for president or governor, Quivey said she sees fewer students voting, though some do get in on select local elections.

“Here in the city of Athens, they do vote for City Council and At-Large and, sometimes, the students will get involved, but I don't see a big turnout with them in an election like this,” Quivey said.

However, where Quivey does see a large turnout of students is those looking for Pumpkin at the front window at the Board of Elections. Students stop by frequently for pictures of him, she said, and many will stop in and pet him — only if he allows, though, Quivey said.

“He’s very temperamental,” Quivey said with a laugh. “We are at his beck and call. He has an attitude. When he wants to interact with you, he will.”

Quivey said she has no way of knowing how many people come out and vote because of Pumpkin, but she does think he might affect the medium they choose to vote through.

“I think a lot of students will come in and early vote so they get to see him rather than to go to the polls,” Quivey said.

Pumpkin does serve as a very visible reminder to vote, beckoning students on Court Street with his big golden eyes, ginger fur and uniquely inquisitive expression.

“I think that seeing him in the (Board of Elections) window can remind people to either register to vote, early vote, or make a plan for voting on Election Day,” Grant Perry, the president of the Ohio University College Democrats, or OUCD, and a senior studying political science and geography, said in an email. “A few weeks ago I was walking down Court on my way to campus and saw him sitting in the window and it reminded me to stop in and early vote.”

OU College Democrats hosted a campus-wide voter registration day with other organizations in September, Perry said. Also, some members of the organization worked with Allison Russo’s campaign for the 15th District in this year’s special election to help register voters as well.

“We have had more students register to vote this year than in the past through our events,” Perry said in an email. “Our organization, in partnership with the Allison Russo campaign, (has) registered more voters than usual.”

OUCR encourages students to vote at its meetings, Ciera Kent, a sophomore studying nursing and the communications director for OUCR, said.

“We always have registration stuff on the tables when people come in,” Kent said, “Especially for people that are out of state and, in state, we can always change that address and everything for them.”

Both groups encourage their members to vote in Athens because of the effect those votes can have both locally and state-wide.

“The decisions made at the municipal level here in Athens, the state level, and the federal level by our Congressional 15th representative play a major role in our lives during our time in Athens,” Perry said in an email.

The size of the area doesn’t mean elections here don’t have a big impact, Kent said.

“It's really important to get our voice out there, especially because we have such influential people here,” Kent said.

Ohio University Moderates, or OUM, also encourages its members and others to vote, Ryan Gwin, the president of the group and a junior studying elementary education, said. The organization has had social media campaigns encouraging students to vote as well as highlighted local upcoming elections.

Unlike the party-specific political groups, OUM doesn’t endorse any specific candidates. It doesn't necessarily encourage students to vote in Athens but, rather, wherever they feel most comfortable placing their vote, Gwin said. 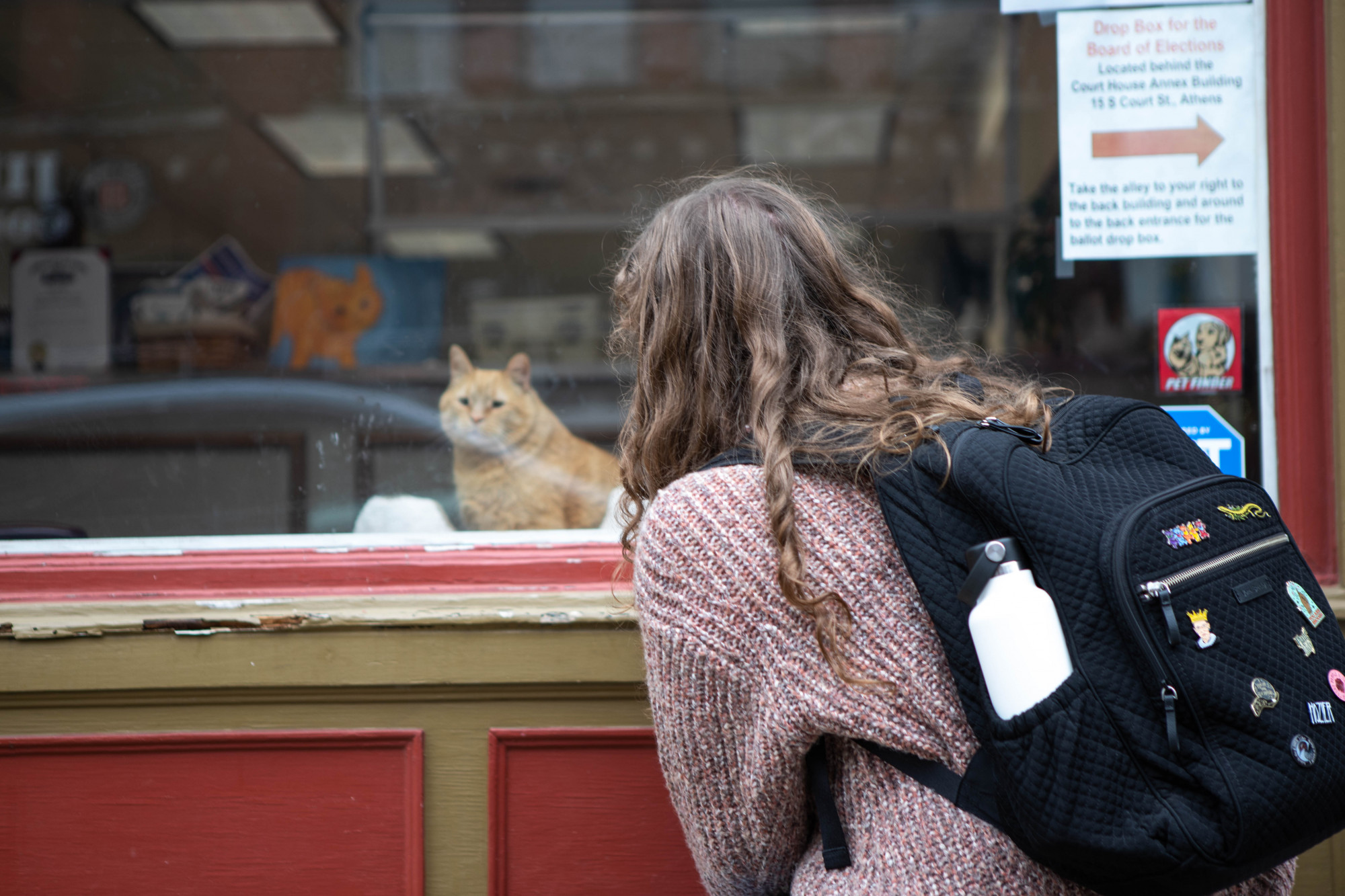 Emily Sudnick, greeting Pumpkin, the Board of Elections on Court Street’s Resident Cat.

“We understand that students may have a big election in their hometown as well,” Gwin said.

Gwin personally votes in his home district in Northeast Ohio, he said, but if there was an impactful enough race, he would switch his registration to Athens, which has yet to happen.

For many students in Athens, the location of voting can simply come down to convenience.

“Last year was the first time I voted, and I voted here just because I was in town,” Holly Pearson, a senior studying management, said. “If I was at home, I'd vote at home. So, it's really just wherever I am at the time.”

The same stands for Taylor Deleruyelle, a junior studying biology. Although it mostly comes down to the convenience, she said, she also feels like her familiarity with her hometown plays a factor.

“I know what's going on there,” she said.

This probably isn’t because of support for a particular political candidate, Poggione said.

“I think there might be a little bit more evidence that it's really these younger voters were mobilized by sets of issues that they are concerned about: racial justice, environmental issues, voting equality, a number of different things,” Poggione said. “If it's really those issues that are driving them, those issues are still really relevant right now. So, that could really argue that we might see a real change, that this is not just a temporary blip associated with one candidate or one particular campaign but perhaps a much stronger, more permanent change.”

One of the biggest indicators of whether a person votes or not is if they have voted before, Poggione said, and with more young people registering and voting in 2020, this trend could continue into future elections.

Also what is likely to continue is the growing impact of the younger generations' activism affecting the political sphere, Poggione said, especially when candidates are encouraged to address certain issues.

“We could see different kinds of candidates that are really addressing issues that those voters care about — more likely to run both for primary campaigns but also then succeed and do better in general elections,” Poggione said. “We could see the parties and all candidates be more likely to address some of those key issues.”

The lasting impact of college-aged individuals' activism could affect candidate agendas, Poggione said, and have a lasting impact beyond election season as well.

Poggione also believes Pumpkin could have an impact on helping students become more familiar with the Board of Elections, serving as a reminder for them to get out and cast their ballot, however they choose to do so.

After election season, Pumpkin will once again return to his perch in the Board of Elections window to be adored by his loving fans throughout Athens and beyond.

Quivey said he was dubbed a “Democat” because of his love for Penny Brooks, a Democrat and the former deputy director of the Board of Election who died in 2020. She took Pumpkin back to the Board of Elections with Quivey after a student, who was in an argument with her boyfriend who threatened to kick the cat out on the street, asked the two women to take him.

“He absolutely adored Penny,” Quivey said. “We could tell that he mourned her and looked for her and, since she's been gone, he has made up with me a lot more.”

Going into the election season, Quivey hopes to see a higher voter turnout and said that each year, the Board of Elections gets a much larger number of people registered than who make it out to vote.

“It's a privilege, and it's our right to vote,” Quivey said. “I wish more students would vote in off years.”