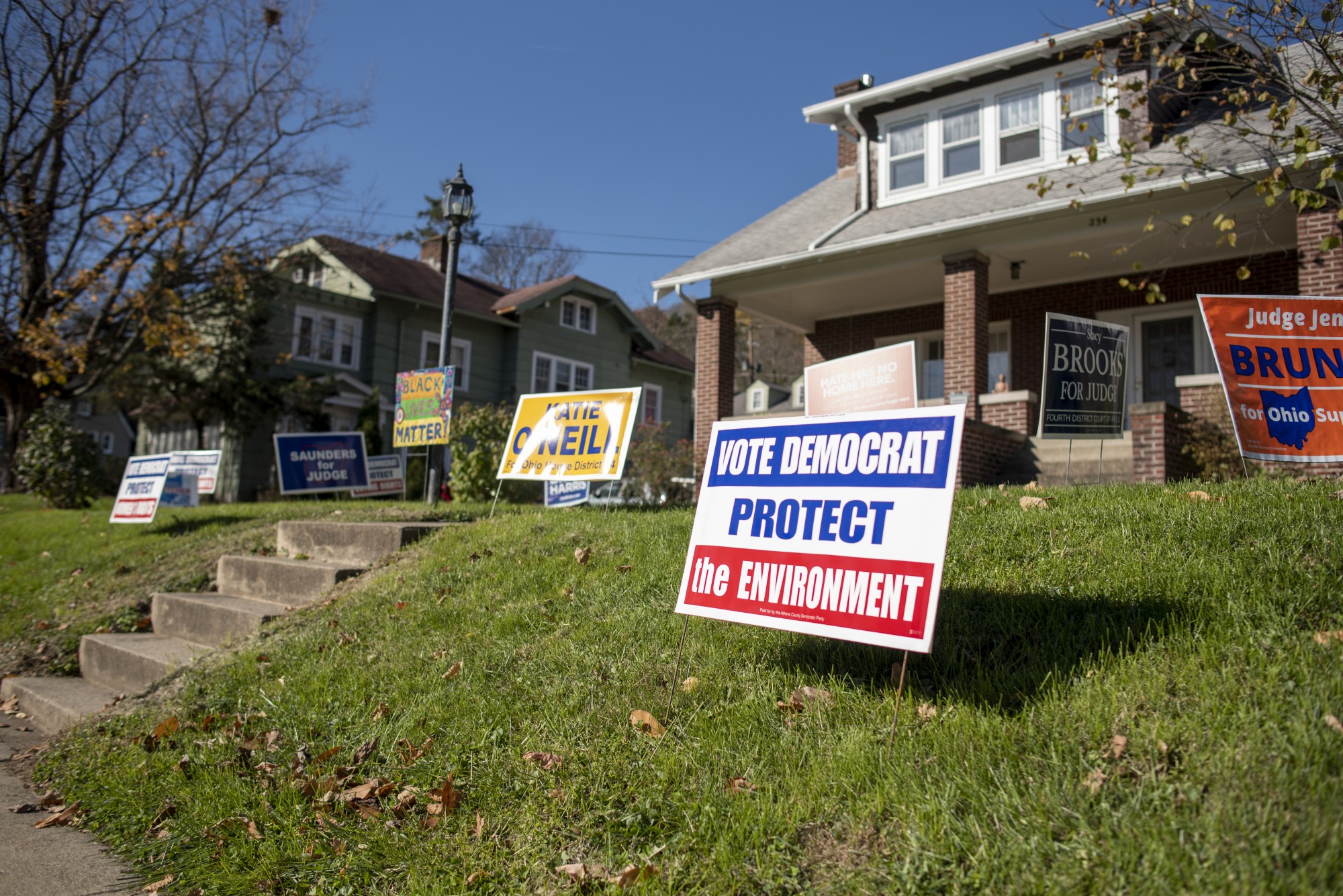 The Effects of Political Signs

Political signs have been more effective this election cycle, but also more controversial

P olitical signs have been more effective in inspiring political discussions during this election cycle than in past years, but they have also caused more controversy, Athens political activists say.

“I worked in campaigns throughout my life, and there used to be the old adage that yard signs don’t vote, and people used to kind of make fun of the obsession with yard signs, that they’re not that helpful to actually winning a campaign,” Haseley said. “I think things have changed. I think we’re in a different place in our political lives where I think yard signs are something that matter to voters right now.”

Yard signs often encourage political discussions between residents about candidates who will be on the upcoming ballot. But while some residents simply put up political signs to show support for their favored candidates, others put up signs in spite of those who disagree.

Hannah Adkins, an Athens resident, currently has 13 political signs in her yard. She originally had one sign that said “Support Small Businesses, Go Democrat.” After a neighbor said something negative about the sign, she added nine more, all supporting different candidates, save for duplicate Biden-Harris signs.

She added several more after two signs were stolen from her yard last week, Adkins said in an email.

“I had planned to put up one or two more, but I don’t appreciate being told my opinions don’t matter, and that I shouldn’t share them on my property,” Adkins said in an email. “Hence the overabundance of signs.”

Though they may have been added out of spite, Adkins believes, at worst, her signs will inspire discussions about the elections that will affect those who see them, which are often for local and state positions or local levies.

Adkins wants to encourage people to vote down the ballot. If someone sees a name in Adkins’ yard they don’t recognize, it could cause them to look up and learn more about the candidates in the election, she said.

“Those discussions are important, seeing a previously unknown candidate’s name might lead to research into local politicians,” Adkins said in an email.

Some voters use political signs to show that it is OK to not stick to only one political party. If there is a Democratic sign in someone’s yard who is known to vote Republican, it could encourage others to cross over the political line, Haseley said.

Pete Couladis, chairman of the Athens County Republican Executive Committee, said it would depend on the person. While some people might be influenced based on the number of signs that they see, others could get mad at neighbors who have different political views than them.

Residents are able to get their signs through a candidate’s website or at a party’s county headquarters. Trump signs are in high demand, and the Athens County Republicans gave out several hundred Trump signs from their headquarters before running out, Couladis said.

Many residents went back to the Republican county headquarters once or twice after signs were stolen out of their yard, Couladis said. Signs being stolen is not new to this election, though. It has been a problem in the past for Athens, Couladis said.

The county Democrats have also had a constant flow of residents looking for signs supporting Democratic candidates, Haseley said.

“I think it gives voters that comfort that if somebody that they respect is displaying a sign of who they support,” Haseley said.