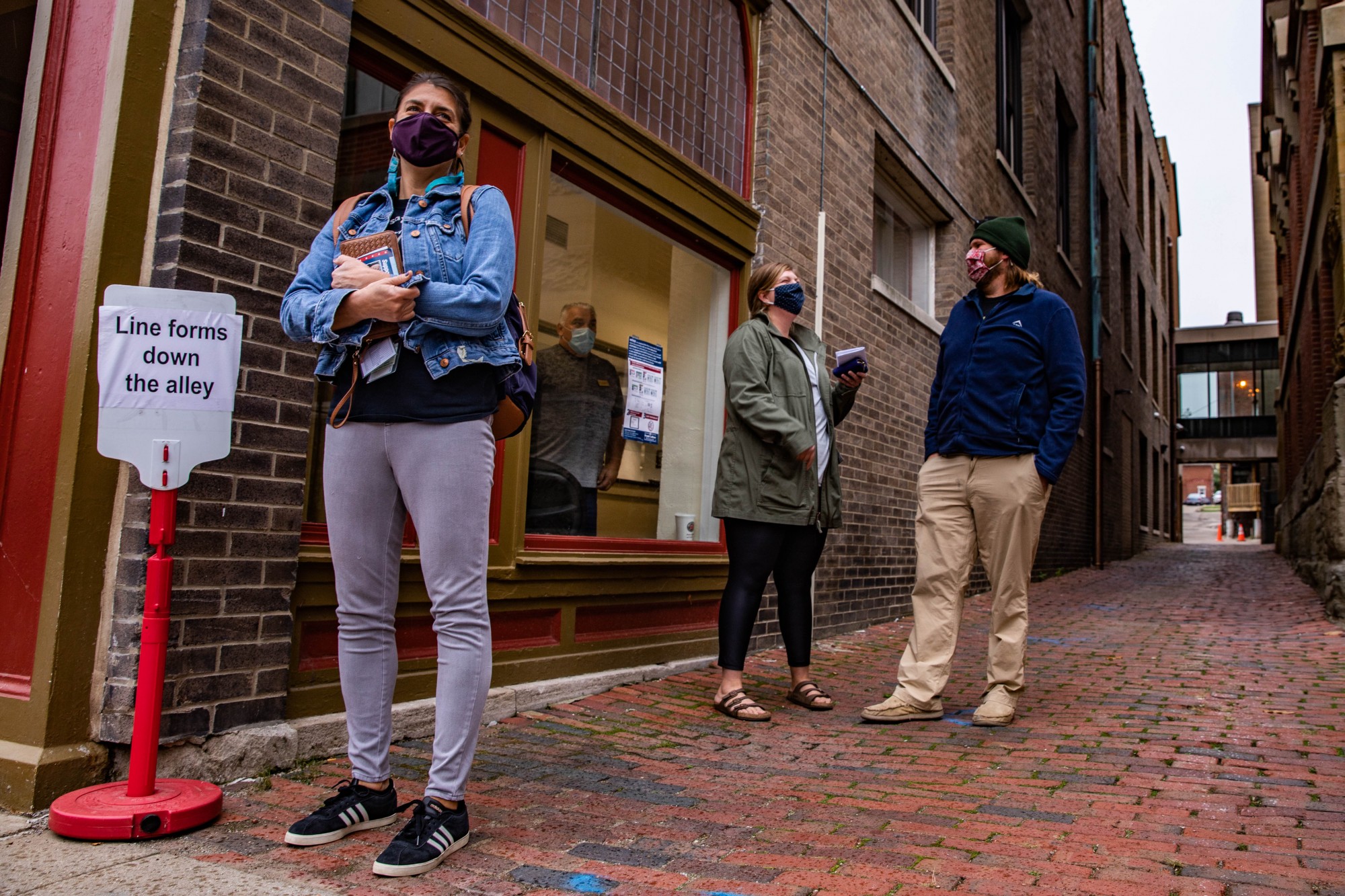 (Left to right) Jennifer Trainer, Sara Andrews and David Rothwell wait in line outside the Athens County Board of Elections office, anticipating their opportunity to vote early on Tuesday, Oct. 27, 2020, with only a week left until polling locations close for the general election.

How the election looks different because of COVID-19

T he implications of COVID-19 have caused this Election Day to look different than it has in the past, with an increase in mail-in and early voting happening across the country as well as more precautions being taken by voting centers to limit the spread of the virus.

“If you take three years ago and 2016, we had around 4,200 people that requested and had mailed out absentee ballots,” Debra Quivey, the director of the Athens County Board of Elections, said. “Right now, we're already over 10,000 we have never had that many people vote by absentee before requesting them by mail. And I've been here 29 years, and we've never had this many.”

In 2016, 30,042 residents voted, whether voting in person or by mail. Almost half the number of people that voted in 2016 have either requested a mail-in ballot or have already cast their vote in person.

Even though these numbers are much higher than they were in 2016, there has been public distrust that has been going around regarding mail in ballots, which has caused a potential lack of voter confidence in the election.

Lysa Burnier, a political science professor, said she doesn’t believe it was the virus that affected voter confidence but more President Donald Trump himself.

“I don’t think the fact of the virus itself has affected voter confidence,” Burnier said in an email. “What has caused a lack of confidence is President Trump claiming with no evidence that somehow the voting process won’t work and therefore the results should not be viewed as legitimate.”

Many people are voting in person to make sure that their vote is counted. This includes Athens County voter and Ohio University student Emily Van Meter.

“I wanted to make sure my vote would be counted, no matter what,” Van Meter, who is a freshman studying art history and studio arts, said.

Quivey wants to reassure people, however, that if they are voting in Athens County, their vote will count.

“I have no problem with thinking or telling people that in Athens County, if your ballot is returned, and it's about valid, your ballots are going to be counted,” Quivey said.

The Athens County Board of Elections have been taking precautions because of COVID-19 during early voting and will continue to take these precautions at the 19 polling locations in Athens during Election Day.

“We're trying to and I feel that we are accomplishing being compliant with the CDC,” Quivey said. “We are wearing masks at the office, we are sanitizing, we have wipes spray, we wipe down the tables after every use, we wipe down the machine after everyone. And we're going to be doing this at the polls ... We've taken a lot of concern time and tried to prepare for this.”

Mary Nally, director of the Center for Campus and Community Engagement at OU, which has been working to get students to vote, understands that COVID-19 has created many complications for Election Day, including long lines, where they just ask everyone to be prepared for wait times and to be patient.

Patience will also be needed as the results of the election come out of the Board of Elections. Quivey said the first results that will come out of the Athens precinct come out at 7:30 p.m., and that will include any returned absentee ballots.

According to a directive from the Ohio Secretary of State, “Election Night reporting begins with the first upload of absentee results by 8 p.m. and will continue at the assigned time throughout the night.”

These results that come out during election night are unofficial results. According to the directive from the Ohio Secretary of State, official results need to be reported from polling centers by no later than 2 p.m. on Wednesday, Nov. 18.

There is the possibility of not knowing the results until several days later, if not longer. Though official results are due Nov. 18 from Ohio polling locations, there still is the possibility of court challenges or recountsLP depending on the nature of the election and the choices of each campaign.

Because of this uncertainty, people will have to be patient and be on the lookout for disinformation that may occur on social media and in the news.

“It’ll be important to be vigilant against disinformation in the news and on social media,” Nally said. “Be sure to consider the source, read beyond the headline and check the author and their sources to see if they are reputable. Avoid reposting or re-tweeting unless you fully trust the validity of the information.”

The coronavirus has had an impact on the election, seen through an increase in mail-in and early voting and the possibility of delayed election results. However, as a major political issue, the handling of COVID-19 has also influenced many voters' decisions on who they are voting for.

“Trump’s handling of the virus has certainly influenced voting — in both directions,” Burnier said. “His Republican base feels he has done a good job while Democrats feel Biden will do a much better job… The big question is how independent voters view the Trump's Administration’s handling of the virus because the election could be very close.”