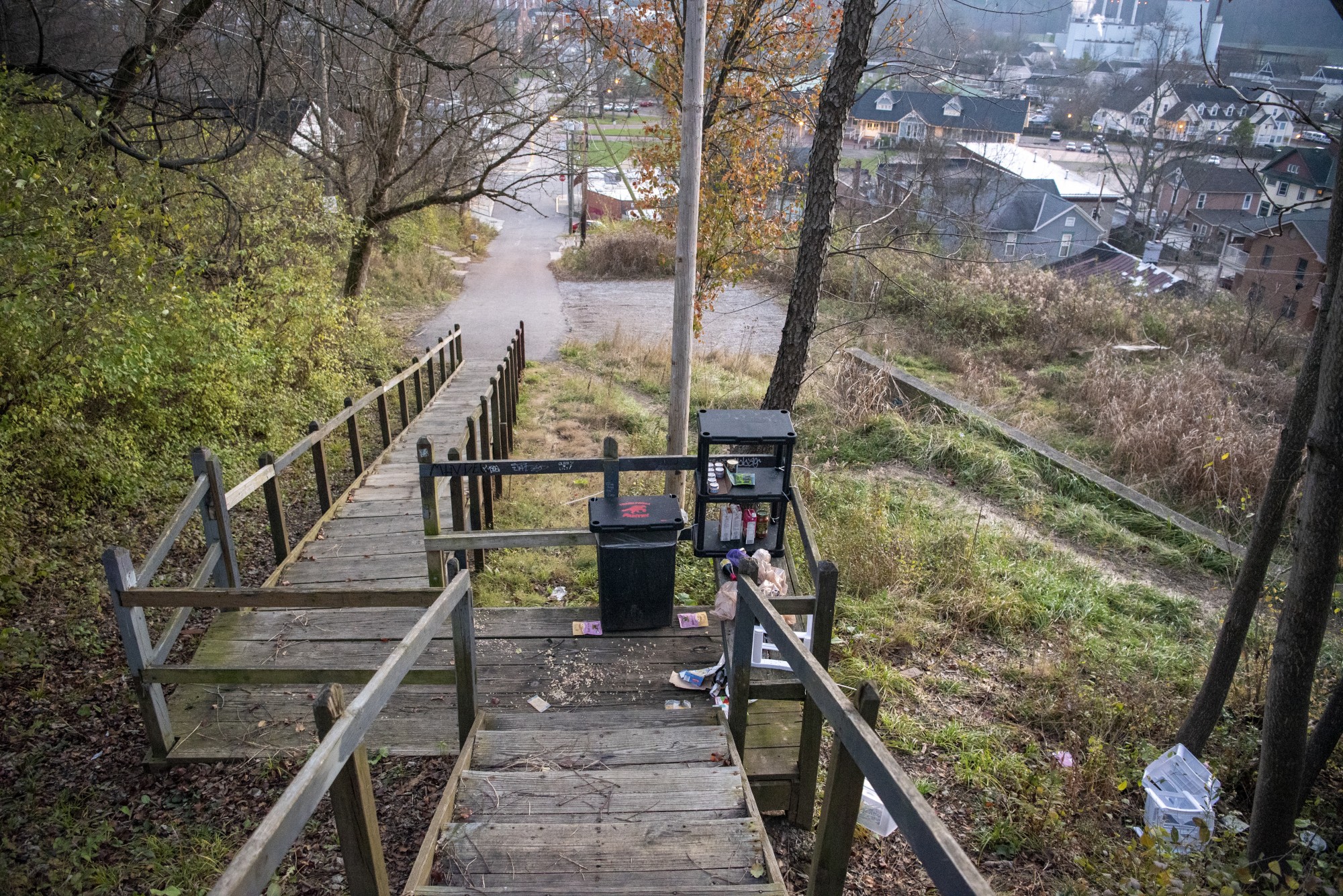 One of the Trash Panda Pantry locations on the steps near Depot Street in Athens, OH.

Athens County ‘blessing boxes’ bring resources to those in need

I t all started on Facebook, Colt Handa, an Athens resident, said.

And that’s exactly what he did.

“A lot of people were like, ‘That's a great idea,’” Handa said. “So I just put some shelves up to get started, and it took off from there.”

What started as discussion on a social media platform turned into Trash Panda Pantry. Handa, who works in merchandising at Lowe’s, put up a plastic $10 shelf for the first location on the steep wooden staircase off Depot Street, behind the Smiling Skull Saloon. Handa has since installed a location on the East Side and another in Nelsonville, with hopeful additional locations in The Plains and Albany.

According to the U.S. Interagency Council on Homelessness, or USICH, as of January 2019, Ohio had an estimated 10,345 people experiencing homelessness on any given day, as reported by HUD. Athens County also experiences a high food insecurity rate, at 24.4%, per 2016 data from feedingamerica.org .

“I just started doing it,” Handa said. “I’ve done some volunteering and things before, but this is the first actual thing I've organized.”

Handa’s friend, Owen West, built the first and currently only actual wooden “blessing box” in Nelsonville, as he’s from there. However, it was removed from its Polley Field location, per request by a city official, Handa said in a message. Handa is now seeking to relocate the wooden box within Nelsonville.

A third pantry is placed behind the Athens Public Library, 30 Home St. The plastic shelves are holding up, Handa said.

“They're organized and staying clean and holding up surprisingly well,” Handa said.

Handa, as an Athens area native, has experienced homelessness, mostly voluntarily, as a “hobo” lifestyle. His knowledge and experiences have informed where he places the Trash Panda shelves.

“When I was hanging out at the Union before they built the patio, there was a fire escape — you couldn't see it from the ally — and homeless guys would hang out under there, tell us stories and tell us where there were camps,” Handa said. “If you're listening, you figure it out.”

Handa has noticed homelessness is an issue that can go undiscussed in Southeast Ohio. Athens is specifically overlooked because of the “university bubble,” Handa said.

“(People) don't really talk about it here,” he said. “A lot of (homeless people) have addiction problems, and that's how they probably ended up homeless — but (many) would choose to just cast them out because they are addicts, and they ‘did it themselves.’”

But Handa feels people who have addiction problems are still a part of society, even if they are homeless or just passing through the area.

According to USICH data regarding Ohio in January 2019, of 10,345 people experiencing homelessness, 999 were family households, 676 were veterans, 643 were unaccompanied 18- to 24-year-olds and 874 were individuals.

“I feel like we are a society; we should be taking care of everybody in our communities,” Handa said. “Like it or not, they are a part of our community. We should be lifting them up, not casting aside.”

“Basically, our goal is to get food into and supplies to people in need by creating these catchpoints that provide street-level community volunteers access to help bridge these gaps in the system,” Chatfield said.

Chatfield believes the pantry boxes are an effective way to get food to those in need because they don’t have eligibility requirements, such as proof of residency or income.

“But if you couldn't afford a home and you were homeless,” Chatfield said, “you would literally be ineligible for even trying to get help.”

Chatfield said the Trash Panda pantries have attracted a lot of local interest from many people, even beyond Athens County.

“I know somebody expressed an interest in wanting one in Meigs County,” Chatfield said. “So it's really just a matter of having people on the ground that live there and willing to do the footwork.”

Chatfield said most organizing and work put into the pantries has been online. She hopes the initiative stays “guerilla and grassroots” and meets real needs as they come. Chatfield stressed that the boxes are not solely for the homeless. They are there for all in need.

“I think just because there's so many barriers for people to get help,” Chatfield said. “But, yeah, if you have a couple extra Clif bars and a bottle of water, and you have a minute to drop it off behind the library, and that's not gonna bother you or you're not in need now, then what's the harm in that — if a college kid takes it instead of somebody who's genuinely homeless.”

Donations to Trash Panda Pantry can be made directly to its locations. Handa has also had people drop off donations at his house. Handa said he’s not trying to “fill the gap” like official public outreach organizations do, but his pantries help.

Part of the solution

Though there were already blessing boxes in Alexander, Kent Felts proposed that Athens County Children Services set up more.

Felts, school outreach caseworker for the Alexander School District, saw people frequently using the existing blessing boxes in Alexander. For him, the boxes are a socially responsible way to get resources to families — especially during the pandemic.

“During a time where we’re trying to really limit contact, it’s a really good way to get food out there,” Felts said. “If we can help families solve problems without having to get involved, it’s good for everybody.”

Felts wrote a proposal to Athens children services to build four blessing boxes and place them in areas that don’t have resources or in less-populated areas.

“We were trying to hit places where folks didn’t have a lot of options,” Felts said.

Felts added the Lion’s Club put a blessing box at the Albany Methodist Church, 5174 W. Clinton St., in Albany and another at the Shade Community Center, 2380 Old State Route 33 in Shade.

Felts’ proposal was approved in August, and it took about two months to get boxes on the ground. Robert Marcum, facilities manager for Athens County Children Services, built each box. Each one cost around $300 for supplies and took four to five hours to build, he said. The boxes were placed in higher-traffic areas and linked to organizations local to placement.

“(The boxes) give community members a chance to get involved because we’re not the only ones who put food in (them),” Felts said. “Churches, individuals can put food in them and kind of become a part of the solution — which is nice and kind of spreads the cost around.”

There are no restrictions on donating or taking the food. Felts said he has families that both take from the boxes and replace items as well. Both seniors and children are welcome to take from the box, despite being from Athens County Children Services.

The blessing boxes provided by Athens County Children Services accept shelf-stable foods, from canned goods to macaroni and cheese. Felts said food items children can prepare themselves are good additions to the boxes as well. Other items are accepted, too.

“I’ve seen people put fresh produce in them — especially when people were using their gardens over the summer, you know; they would put in extra zucchini or squash or tomatoes,” Felts said. “It’s interesting to see what the community puts in there — and it's all used. The traffic is wonderful.”

For Felts, self-serve food pantries are a less-stigmatized means of social assistance.

“(People) can come whenever they want to, whether it’s in the morning or late at night. And they don’t have to feel like people are watching them or judging them when they take food.”-Kent Felts

The happiness of sharing

“Take what you need, give what you can,” is the message behind the Athens Be Kind Box in The Market on State , or the Athens Mall, 1002 E. State St. The box was founded by Dr. Mathurda Rath, or Dr. May, chef and owner of Dr. May's Thai Kitchen.

“The box means to serve all Athens City members and nearby who are (in need) in this COVID-19 pandemic,” Dr. May said in a message. “Anyone can use it as it's a serving yourself box: you can drop off donation items or (take) any items anytime the mall is open.”

The Be Kind Box was a way to celebrate the three-year anniversary of Dr. May’s business . Dr. May got the idea from “ happiness of sharing ” boxes in Thailand that turned out this year as a product of the pandemic.

“I have (had) this idea for quite a while and (wondered) if there would be a blessing box around here until I saw one in Chauncey called "Blessing Box,’” Dr. May said in a message. “Then I felt more comfortable to run one in Athens, as it's not a new thing to people here.”

The Be Kind Box was supported by others in the Athens community. The Athens mall owner supported Dr. May’s box and offered to run electric to the mini-fridge at no cost, Dr. May said. Local artist Barbara A. Fisher also painted the hutch.

Dr. May’s box functions like any other blessing box, she said, like taking non-perishable foods. However, she stressed it is in need of pandemic-related items, particularly: “hand sanitizers, wipes, facemasks of any kind; toiletries.”

The Be Kind Box does differ from other blessing boxes in that Dr. May asks donors to send photos of their donations right after placement. This way, the box and its Facebook page can stay up-to-date for its users. It also has a mini-fridge for perishable items.

“We kindly asked the donor if they could take a photo of the items they dropped off and post it right away on page so people who need it can come right away,” Dr. May wrote. “Plus, I'm not with the box all the time to keep it up to date in real time.”

“That’s why I called the box ‘Athens Be Kind,” Dr. May said in a message.