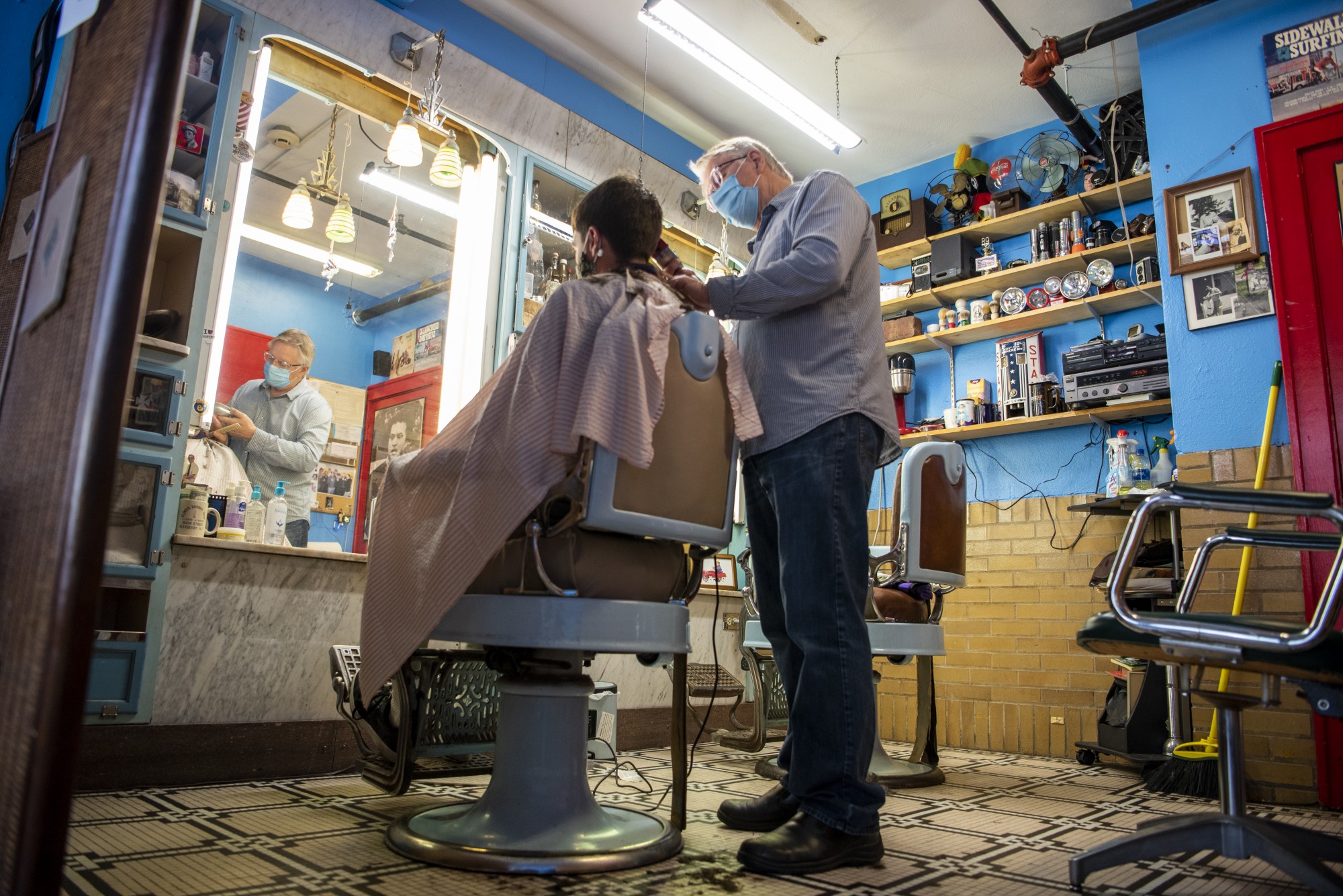 H airdressing is embedded in repetition. Bantering with clients. Sweeping up the piles of blond, brown, black and gray hair. Displaying knick-knacks, such as old-time radios to add personality to the shop.

A barber expects to go into work and meet some new and some familiar faces until the red, blue and white pole is turned off and the day is over. Wake up the next day, and repeat. 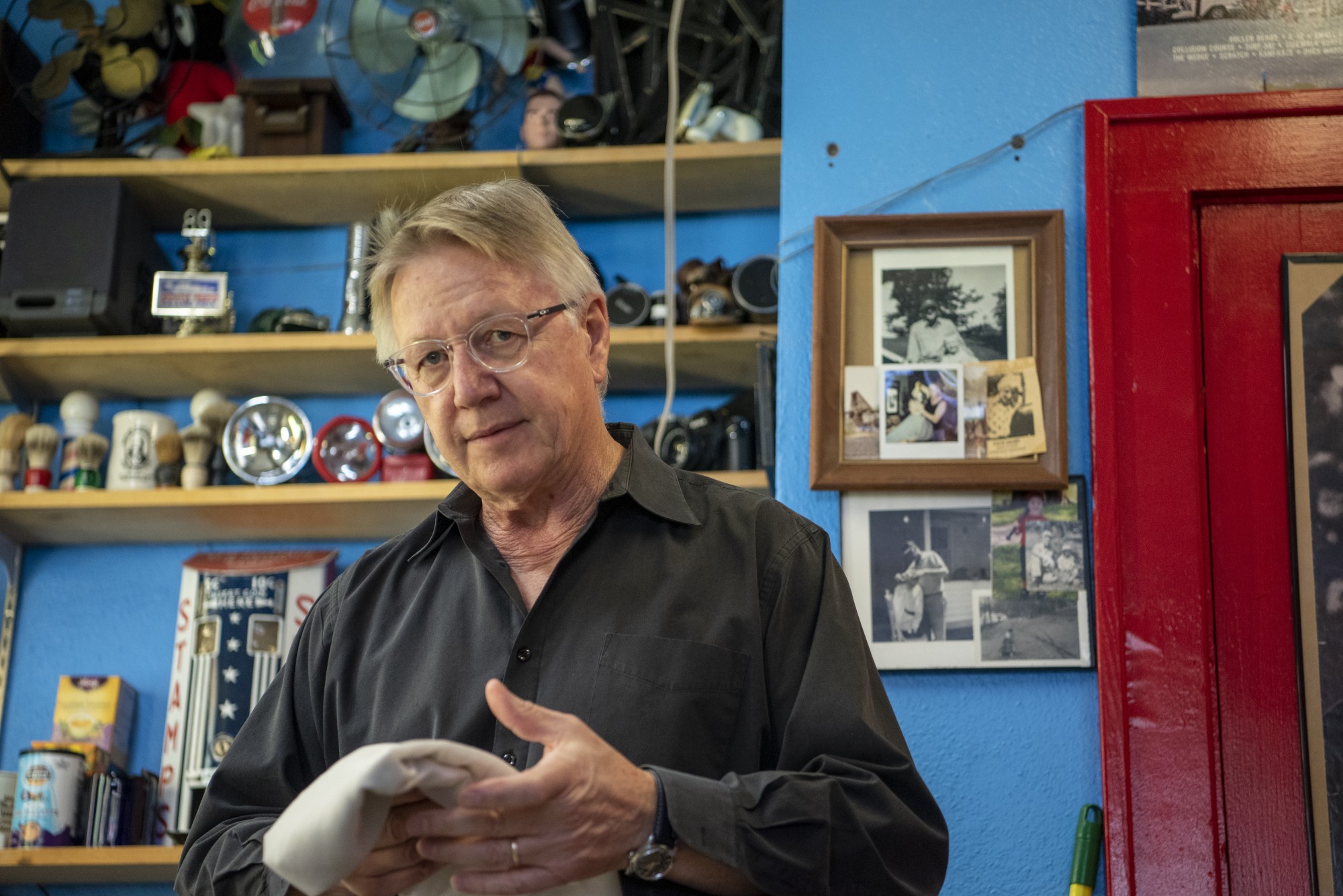 Dave Smart poses for a portrait in his barbershop, Smart’s Barber Shop on West Washington Street in Athens, Ohio.

For Dave Smart, an Athens barber and the owner of Smart Barber Shop on West Washington Street, this has been his routine for over 40 years — a routine that was stopped in 1984 when he got a call from his employer and friend, Fritz Bookman.

“Don’t come into work today. The shop is burnt down.”

Being a barber wasn’t something Smart planned when he was going to Rio Grande Community College. He was going to school for dentistry, an expensive investment that would reap bountiful rewards. Smart kept his head above water working at Foster Grocery in Buckeye Hills during the week while working at S. Davis Grocery back home in Nelsonville on the weekends.

Smart came to the realization that stocking produce wasn’t going to pay for tuition, especially dentistry school down the line. He didn’t have the money to sign onto a loan nor even think about paying it back. The end was there in plain sight: it was time to leave Rio Grande and head back home.

Making ends meet was a recurring worry. As a kid, Smart saw his mother work three jobs while trying to put food on the table for him, his two brothers and two sisters.

“No way the United States government is going to tell me how to raise my family,” Smart’s mother said.

Food stamps and government handouts weren't on her mind when it came to raising her family of four.

“Pride was the reason my mom refused to be on welfare,” Smart said.

Smart had to decide what he was going to do after leaving Rio Grande. With nowhere else to go besides home, he received a call from a friend and mentor: Bookman. Finally, a sigh of relief.

Like passing the baton in a race, Bookman seeded Smart’s interest in cutting hair at an early age. When Smart was a kid, Bookman cut his hair at his own shop. They stayed in touch and were friends ever since. When Bookman heard of Smart dropping out of college, he was there to pass the poll to Smart, knowing that he would be a talented barber.

Bookman suggested that Smart should go to Ohio State Barber College in Columbus, where he would learn how to cut hair for a year, then would follow an apprenticeship under Fritz. This sounded like a dream come true in Smart’s mind. But one fear still lingered, crawling around in his mind: money. 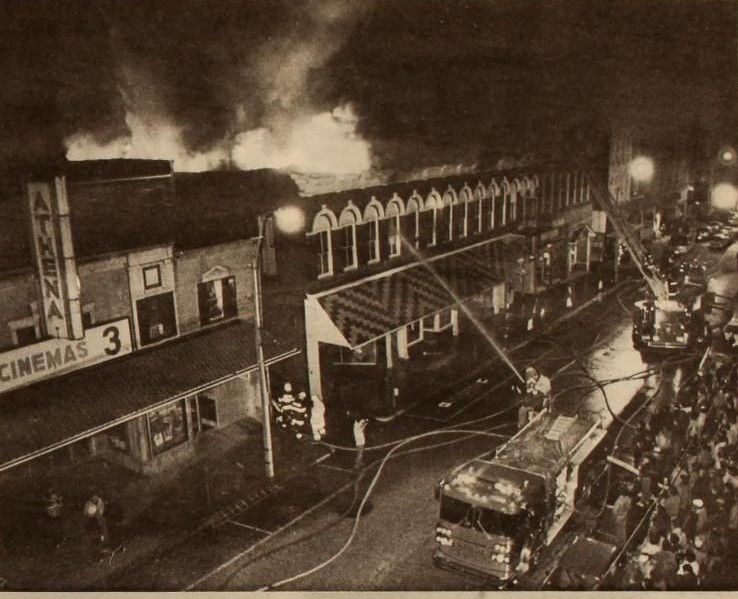 An archived photo from the fire that burnt down Smart’s old barbershop, Your Fathers Moustache in the spring of 1984.

While working at S. Davis Grocery, Smart was putting canned goods on shelves while thinking about how he was going to come up with the money for barber college. It wasn’t until the brothers/owners of S. Davis offered Smart a loan to go to school and become a barber.

“I wouldn’t have been able to go to barber school if it wasn’t for them,” Smart said.

With a hairdressing license and a mentor by his side, Fritz offered Smart a barbershop gig he couldn’t refuse: a job at one of the leading hairdressing operations in Athens.

No one was hurt in the blaze that left only the shells of the two almost century-old structures standing. A number of Ohio University students were made homeless during exam week by the disaster, and the University and the community stepped in to offer them free housing and other assistance.

“The place to go for quality service,” the plain white Your Fathers Moustache flyer read. “Our 10 expert stylists will style your hair the way you want it, from a conventional haircut or one of the many modern hairstyles. We even have free consultations.”

Smart was a part of a booming hairdressing business in Athens. Your Fathers Moustache was a chain of hairdressing locations, usually found in malls back in the ’80s. Smart’s location, where Brenen’s Coffee Cafe is now, was a thriving business on Court Street.

In 1984, Smart’s shop just received an updated look: new glass doors, a new outdoor lounge area with a colorful aesthetic and new hair cutting equipment. Your Fathers Moustache was expanding businesses throughout the country by teaching up-and-coming hairdressers the tools of the trade. Smart even invested some of his newfound money in the company, something he couldn’t have imagined during his college days.

When Smart woke up in the morning and went to sleep at night, he felt an emotion foreign to him: relief. There wasn’t the fear of working two jobs to make ends meet. The S. Davis loan was paid off. He didn’t have the fear of not being able to support himself.

Instead of fixing teeth, Smart was cutting hair for the people of Athens. And when a customer got out of the chair, Smart could look in the mirror and know he was making a customer happy. Fear was put to rest.

The cause of the fire is unknown. Also unknown is whether the businesses will be rebuilt and what private or government aid might be available to help restore a large area in the heart of downtown Athens.

The next day, Smart started his day like any other. As he was putting his assortment of hair-cutting shears and spray bottles in his bag, he got a call from Bookman. Smart knew something was off as the phone ringed in his ear.

Why is he calling me this early?

He picked up the phone.

“Don’t come into work today. The shop is burnt down.”

This is part one of a series. Part two is coming soon.