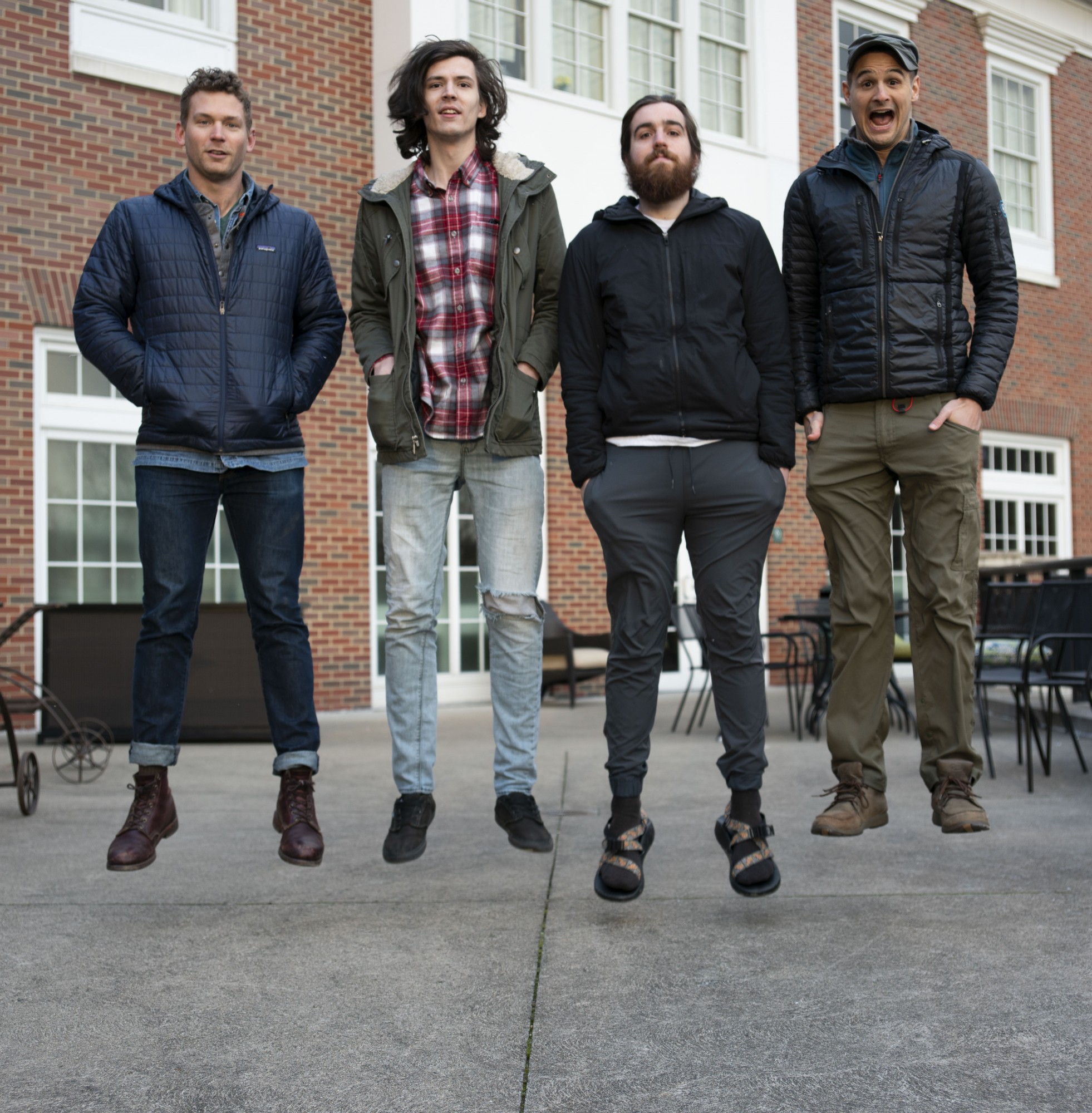 Members of the band Ready Aim Flowers (from left to right) Steven Rekstad, Jeff Podolski, Caleb Cole, and Dave Lawrence pose for a portrait on January 20, 2020.

He knows he can change the world with it, too.

“I don’t know what else to call it,” Lawrence, the band’s main lyricist, said after his bandmates, Caleb Cole, Jeff Podolski and Steven Rekstad, burst into a fit of laughter as he distilled the band’s vibe to its essence. “And so then, I tend to take the bare-bone skeleton idea or concept, and then these guys make it good.”

Lawrence said he met Rekstad while they were playing ultimate frisbee, and they discovered they both possessed the same passion for music. Soon, they were hanging up flyers around Athens, but it didn’t amount to anything. Rekstad, however, met Cole while they were rock climbing. Cole was already friends with Podolski, connecting with him through the video game series Super Smash Bros.

“Yeah, we met, what, my sophomore year? Freshman year?” Podolski, who plays drums and “whatever else” is needed of him, said, facing toward Cole. “Super Smash Brothers brought us together.”

Each of the guys undergo vastly different lifestyles every day, yet they find the same yearning to construct impactful music within one another. Cole is a substitute teacher in Athens County; Lawrence teaches at Ohio University in University College or the Department of Modern Languages as a Spanish professor, depending on the semester, and is part of the faculty-in-residence program. Podolski is the production director at WATH/WXTQ Power 105.5, the local radio station; and Rekstad is a civil engineer looking for work, though he said he may start substitute teaching as well or join Podolski at the radio station.

Originally under the moniker The Larger Sound, the band found its new name amid one of Lawrence’s dreams. In the dream, when the emcee announced the next act as Ready Aim Flowers, cannons spit out flower-shaped confetti, and Lawrence said he just knew, even though not everyone agreed.

“Our corresponding significant others were not fans of ‘Ready Aim Flowers,’ but we won them over eventually,” Lawrence, who also plays a plethora of string instruments for the band, said. “I don't want to dive too deep into this, but I really like the idea of an active and sort of proactive idea about good vibes, love, kindness, all that stuff. So it's like ‘ready aim good stuff,’ not ‘ready aim bad stuff.’”

Ready Aim Flowers has two singles, “Fieldwork” and “Reckless Affection,” both of which were released 21 days apart in August 2019 and are available on all streaming platforms.

“Fieldwork,” a ukulele-driven track based on Lawrence’s two-month experience living in a tent in the desert of southern Utah, came first. On the excursion, Lawrence said he noticed a noteworthy difference in his paleontologist friend’s demeanor when he was in his workspace. Lawrence took his observations and turned them into advice for his friend as well as inspirational lyrics for “Fieldwork”: “There’s more to life than being mean or playing nice / Don’t wear a halo, even though it makes a good disguise.”

To the guys, “Fieldwork” came out better than they ever could’ve imagined, considering they almost didn’t record it.

“It was like a b-side,” Rekstad, who plays bass, guitar and keyboard on occasion, said.

“Reckless Affection,” however, is going to be reworked and re-released. Cole said its primary issues were a lack of low end, which is boosting the bass, that occurred after the mastering process, and the band tried to play the whole track to a metronome. Podolski added that the track was wholly dubbed, which means they all recorded at separate times.

The band recorded at 3 Elliott Studio with Josh Antonuccio, a lecturer in OU’s School of Media Arts & Studies as well as an audio engineer, to knock out the track’s previous kinks. The pop funk jam, though, will still hold the same charisma.

Alongside reworking “Reckless Affection,” the band is set to drop three more singles in the next few months, and they’re nothing like the first two.

“So the first two singles we have out kind of err on the side of that optimism and affection,” Lawrence said. “Then the next three that will be released here over the next few months will end up sort of covering more of a spectrum of emotional content, be that loss or humility or understanding when you don’t have all the answers, or I guess trying to pick up the broken pieces.”

Though Ready Aim Flowers’ music technically falls under the pop genre, each of the guys believe they’re providing features not seen in mainstream music.

“A lot of music that’s sort of commercial, or sort of corporately designed, I feel doesn't have a lot of spirit or soul to it ... I think our music definitely carries with it a sincerity, putting ourselves out there and, hopefully, connecting with sort of basic human emotions and needs and speaking to those a little bit more than average stuff.”- Dave Lawrence, frontman of Ready Aim Flowers

The band’s overarching goal is different to each member, but they all hope their music furnishes every listener with something they can’t find anywhere else.

“I think the idea is just to feel,” Cole, who plays piano, drums and bass, said. “I love that in a song, like there’s a really raw emotion in the vocal take or something, and you can hear whether that’s raw happiness or despair, loathing. It’s really nice to just hear that feeling.”

The band is grateful for the diverse array of people who come to its local shows. Each member takes pride in recognizing faces, knowing they’ve connected musically with people they never would’ve met otherwise.

“I think one of my favorite bits is when we go and play a show, it’s not just college students or just families or just older people at a bar,” Cole said. “It is really a sampler platter of people that always come to the show.”

Though the band appreciates everyone who comes to their shows, they have a favorite fan, Rekstad said.

“My favorite is that dude that we saw in the background of every Pawpaw (Festival) picture just vibin,’ and then we start seeing him everywhere around town,” Rekstad said.

At the end of every show, Ready Aim Flowers asks its audience to swing by the merchandise table and make a donation in exchange for a friendship bracelet made by Rekstad and a sticker. All donations go toward Solid Rock International, a clinic that services the impoverished in the San Juan Valley of the Dominican Republic.

Lawrence said Ready Aim Flowers owes its morale and local success to Josh Brown, the music booking coordinator for Casa Nueva Restaurant and Cantina, 6 W. State St., where the band will be performing on Saturday, Feb. 1, at 9 p.m.

“Josh at Casa really gave us a boost,” Lawrence said. “He just really believed in us and encouraged us a lot and kept hooking us up with gigs every couple months at Casa. It just gave us an amazing opportunity to practice live sets, to play the different audiences opening for different fans.”

Brown said he noticed the band’s musical aptitude from its first live performance at Casa, and he believes it provides the missing link in the Athens music scene. He said he knows Ready Aim Flowers is bound to be a household name, but he hopes the four guys remember their roots amid the prosperity headed their way.

“They have a lighter, poppier flair, which I think is something that's needed, and they pull it off really well,” Brown said. “They're really nice, great guys, and I can see them going some place musically outside of Athens. I hope they remember the little guys like us."