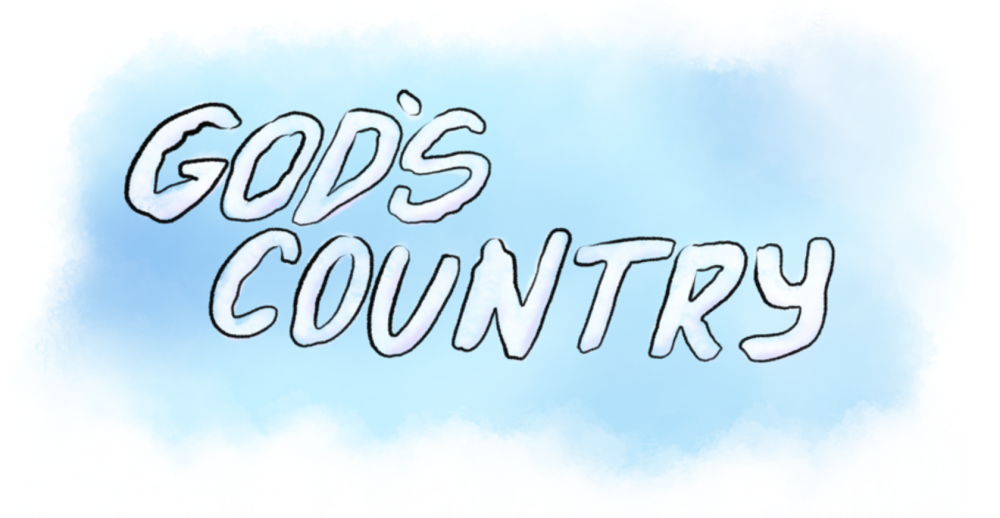 The life and challenges of an Appalachian atheist

S he went to church every Sunday when she was a child. Her father taught Bible lessons, and her mother was on the church council. To this day, her siblings remain religious.

But for Cheryl Blosser, a New Straitsville resident, Christianity just “never took.” She said she was just going through the motions when she went to church – and eventually asked to be removed from her local Methodist church’s membership.

New Straitsville is an intensely Christian town. Three crosses loom over the town’s main street, with the Ten Commandments emblazoned on a rock below. Blosser’s yard lacks any religious monuments, but she does keep some antiques and historical items around.

Blosser doesn’t try to hide her atheism, and has many religious friends, but she said other residents of the little Perry County village have been shocked by it.

“This woman just stared at me,” Blosser said, recalling someone’s reaction to learning of her atheism. “She’s a very devout woman. She was appalled.”

Southeast Ohio is a Christian stronghold. It borders the so-called “Bible Belt,” and a majority of residents attend Protestant Christian churches, but the region’s religious landscape is rapidly changing.

Church membership is declining, and mainline Protestant denominations are struggling to fill their pews on Sunday mornings. Some of those churches are even dying off: the First Christian Church in Nelsonville held its final service last year.

Blosser is far from the only atheist in Southeast Ohio: in the region and across the country, “nones,” or people who don’t identify with a religion, are growing rapidly. By some measures, their numbers equal evangelicals and Catholics.

Despite this changing religious landscape, churches are still the social cornerstones of many small communities. As new ideas and identities emerge in the region, atheists like Blosser have to go out of their way to find community.

“How is that possible?”

That was the first question Blosser’s father, who has since passed away, asked when she told him she was an atheist. He had attended church his whole life and couldn’t imagine going without it.

Being an atheist or nonreligious person in rural Ohio isn’t easy. Berkeley Franz, an assistant professor of community-based health at Ohio University, said many in southeast Ohio are like Blosser’s father: they rely on church not just for their faith but as their community.

The decision to leave one’s church might lead to a sense of social isolation, Franz said, making life harder for non-churchgoers in Appalachia.

“The real challenges in terms of what you leave behind,” Franz said.

That’s because churches are oftentimes the main social organizations in rural towns. Franz emphasized that, on the whole, the U.S. is an extraordinarily Christian country. In rural areas, Christianity has an even stronger base.

In Ohio, 73% of adults identify with some type of Christianity, according to the Pew Research Center. More identify as evangelical than mainline protestant, according to the center. Religious “nones,” by comparison, make up about 22% of the population.

Additionally, some people have misperceptions about nonreligious groups, leading to further isolation.

“People who are atheist or nonreligious are not amoral,” Franz said. “People sometimes equate those two.”

Atheists and other nonreligious groups aren’t the only ones who feel this sense of isolation. People of other religious identities, such as Islam or Judaism, also lack places to worship, Franz said.

Blosser has worked to build up a community around history in New Straitsville. She’s the office coordinator for Little Cities of Black Diamonds, a local history group and community organization.

History is Blosser’s great passion. She spends her days giving tours of former mining towns in the area and educating people about the history of miners, unions and labor in Appalachia. She said that, at one point, the miners brought a great religious diversity to the region – but added religion in Southeast Ohio has become “homogeneous” since then.

Even from outside the church, Blosser said she’s noticed the changing face of religion in Southeast Ohio. People are leaving mainline Protestant churches in droves. Several New Straitsville churches had to team up to hold a Vacation Bible School for kids this year, she said.

It’s not just churches in Perry County that are struggling for members and resources. According to Pew, mainline Protestant and Catholic churches across the country have been in decline for decades.

David Shoemaker knows what it’s like to see a church on the brink. He’s been the pastor at the Methodist church in Buchtel since 1999, and his congregation was once in dire straits.

At one point, only about 20 parishioners would show up to church on a given Sunday, he said. Shoemaker also noted a general loss of membership across the entire Methodist church over the past few decades.

“You see a decline in mainstream churches across the country and around the world,” Shoemaker said. “There’s a general decline in membership.”

That makes the Methodist church in Buchtel, a former mining town outside of Nelsonville, an oddity. While only a dozen or so people sang hymns in the historic building a few decades ago, it now boasts 80 or more on a normal Sunday.

Shoemaker attributes the church’s comparatively high membership to a hardline stance on scripture and a concerted effort to bring new members in.

More Ohioans identify as evangelical rather than Protestant, according to Pew. Evangelicals tend to be more conservative in their approach to Christianity and the Bible and have seen lesser declines in membership compared to more moderate mainline churches.

At the Ebenezer Baptist Church, located about 9 miles north of Logan, membership is booming. The church sees more than 400 attendants on a given Sunday, despite being “literally in the middle of nowhere,” according to its pastor.

Rev. Steve Hubbard moved from Myrtle Beach to take the helm at Ebenezer. Parishioners drive up to 40 minutes to listen to his sermons. Like Shoemaker, he says a hardline stance on the Bible is what drives people to Ebenezer.

“They don’t want to hear a bunch of fluff and stuff,” Hubbard said. “That’s kind of like getting cotton candy at the fair. You get a sugar high.”

Hubbard also attributes the death of some local churches to increased mobility. At one point, the church one attended was simply the one nearest to them, Hubbard said. In addition to his church’s Biblical stances, Hubbard said outreach is vital in attracting new members.

While Hubbard’s and Shoemaker’s churches are thriving, the general decline of Christianity in the U.S. has continued. The pastors both cited a lack of regard for Sundays as a reason for declining church membership.

Experts, meanwhile, say that the rise of individualism in the U.S. might be playing a part in the decline. There has also been a general decline in trust in organized religion, according to Gallup

Blosser believes that divisive national politics might have something to do with the slow decline of moderate, mainline protestant and Catholic churches.

“I don’t think the moderate churches are meeting the needs of the people,” Blosser said. “We’re being divided.”

Franz said the decline of churches locally means a decline in social institutions for communities. She said churches play a “key role” in connecting people.

Finding community with (or without) God

Some refer to the wide open spaces, hills and expanses of nature in Appalachia as “God’s Country.” As an atheist in God’s Country, Blosser has sometimes been chastised for her beliefs but still tries to help local communities.

A few years ago, Blosser and other volunteers were looking to churches in neighboring Shawnee for help. They were hoping to find a place to pass out free meals in the village, but none of the congregations could muster enough resources to do it.

“None of them had the time,” Blosser said. “They didn’t have enough people.”

She contacted three separate churches about handing out free meals but was unsuccessful. Instead, Blosser’s group wound up getting a local bar to open hours early, so they could pass out much-needed free meals in one of Ohio’s poorest regions.

“I like differences,” she said. “I like talking to people ... If you’re willing to accept people, it can be a beautiful world.”