Historically, rural Appalachia was considered an extensive coal mining region. Before the 1970s, the U.S. had very limited restrictions on the coal mining industry, which resulted in the environmental legacy known as acid mine drainage.

Coal miners would tunnel into the coal, safely extracting as much as possible. This process created large labyrinths carved out of the earth that later filled with groundwater when the pumps were deactivated. This caused pyrite minerals that were exposed to water and oxygen to react, forming sulfuric acid and large quantities of dissolved iron. During the 1980s, an air shaft that was sealed exploded, filling Sunday Creek — a tributary of the Hocking River — with excessive amounts of iron each day.

Over time, the iron seeped into the water stream, creating the dark red effects of the acid mine drainage found in rivers today, Guy Riefler, a civil and environmental engineering professor at Ohio University, said.

“If they’d never done any coal mining, this would be where the water table is, but since it’s traveling through the old mine, it has picked up all this pollution,” Riefler said.

He’s made it his mission to research and devise a plan to reverse the side effects of acid mine drainage on the environment.

“(Acid runoff) openly drains from abandoned coal mines into nearby stream and waterways carrying excess metals, high acidity and very low pH values, leaving stream orange and disrupting the aquatic organisms in the stream, if not destroying them completely,” said Jen Bowman, director of environmental programs at the Voinovich School of Leadership. 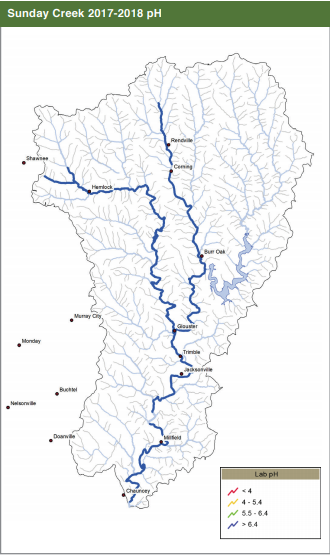 Acid mine drainage is a problem in many of the waterways in Southeast Ohio, including Raccoon Creek, which is a tributary of the Ohio River, said Nora Sullivan, chairperson of the Raccoon Creek Partnership, a non-profit established for the watershed control of the creek.

While the effects of acid mine drainage can be seen by the physical eye, Riefler said they’re not harmful to humans the way they are to wildlife.

“This isn’t a threat to human beings in terms of causing disease or cancer, but it is really destructive to wildlife,” Riefler said.

While the iron is non-toxic in itself, it accumulates in such high quantities in waterways like Sunday Creek that it produces thick, rust-colored sludge that coats streams and destroys the habitats of aquatic life, Riefler said.

Nate Schlater, the watershed program director at Rural Action, said acid mine drainage is among the leading causes of why many of the waterways in Southeast Ohio are severely polluted. Wastewater, sediment, silt and nutrients are also possible explanations for the pollution.

Some tolerant aquatic wildlife are capable of surviving the influx of pollution, Schlater said. However, this will decrease the biological diversity in the river and impact the functioning of the entire ecosystem.

“In Monday Creek, there are now 37 species that live in a stream that were once considered dead,” Schlater said. “Many of these species have not lived in this stream since coal mining.”

Bowman said source control reclamation is always preferred to a treatment plant, but it’s not always an affordable or practical way to treat the site of pollution.

In the past, Rural Action’s watershed restoration project focused on abandoned mine land remediation in Monday Creek, Sunday Creek, Huff Run and Mud Run. Schlater said the watershed team spends about half its time focusing on abandoned land mine work, while the other half is spent on other non-profit initiatives.

“We are now working to address one of the largest acid seeps in the state and create a business out of the pollution that will enable us to continue investing in water quality restoration and preservation,” Schlater said.

Bowman and Schlater both believe climate change is influencing the levels of pollution in the waterways in Southeast Ohio. Bowman said longer and harder rains could create more erosion, which moves nutrients that can create harmful algae blooms.

Schlater said there is “no doubt” that climate change is impacting the water resources. He said that if the water temperature increases, it would affect the impact of biology and nutrients as well as possibly encourage invasive species to take over the river system.

Elaine Goetz, the director of sustainability of OU, said the bigger issue to tackle is that climate change and acid mine drainage are both caused by the same thing: the burning of fossil fuels.

“Coal mining is the issue for acid mine drainage,” Goetz said. “Climate change is caused by burning of not only coal, but (also) natural gas and oil.”

The largest way that people can help reduce the pollution in the Hocking River and surrounding tributaries is simply being aware of how they dispose of waste, Bowman said.


“Excessive pollution means that water quality will be decreased, sensitive aquatic species will no longer exist in these areas or, with more pollution, no aquatic species may exist,”-Nate Schlater, watershed program director at Rural Action


This includes limiting the number of human-caused disturbances on the riverbanks, removing trash and loose items from yards and leaving existing natural vegetation on the banks to stabilize and reduce erosion, Bowman said.

Ohio has recently been experiencing an increase in rainfall and higher temperatures with more extreme weather events such as droughts, high winds and floods, all likely caused by climate change, Riefler said.

If there is more rainfall in a region, water levels in the rivers will be higher, which means that acid mine drainage will impact fish and other aquatic life less. This process works in reverse, too.

One of the only viable treatment plans that is working and sustainable in the region is the True Pigments project, developed by Riefler and Michelle Shively of Rural Action, along with John Sabraw, an art professor at OU. It began as a passion project that was developed specifically to combat the effects of extreme acid mine drainage in Sunday Creek, Riefler said.

“The project involves collecting water, treating it, producing paint and selling the paint to pay for the plant operations,” Riefler said. “As an environmental engineer, my focus is problem solving using environmental solutions, like cleaning up pollution.”

Riefler said his ultimate goal is to be able to produce the pigments on a large scale so that they can be sold commercially to make the project fully self-sustaining.

The True Pigments project has been a game changer for water quality restoration in Sunday Creek, Schlater said. The acidic seep currently impairs 7 miles of Sunday Creek, acting as a barrier for fish passage from the Hocking river. Once completed, the True Pigments research and extraction system will allow all 7 miles to be restored fully.

“The possibility that a project can treat water, pay for itself and pay for addressing other water quality impairments is unheard of and extremely exciting,” Schlater said.

Correction: A previous version of this report incorrectly stated those involved in the Rural Action project and the specific name of the project for water quality restoration in Sunday Creek.