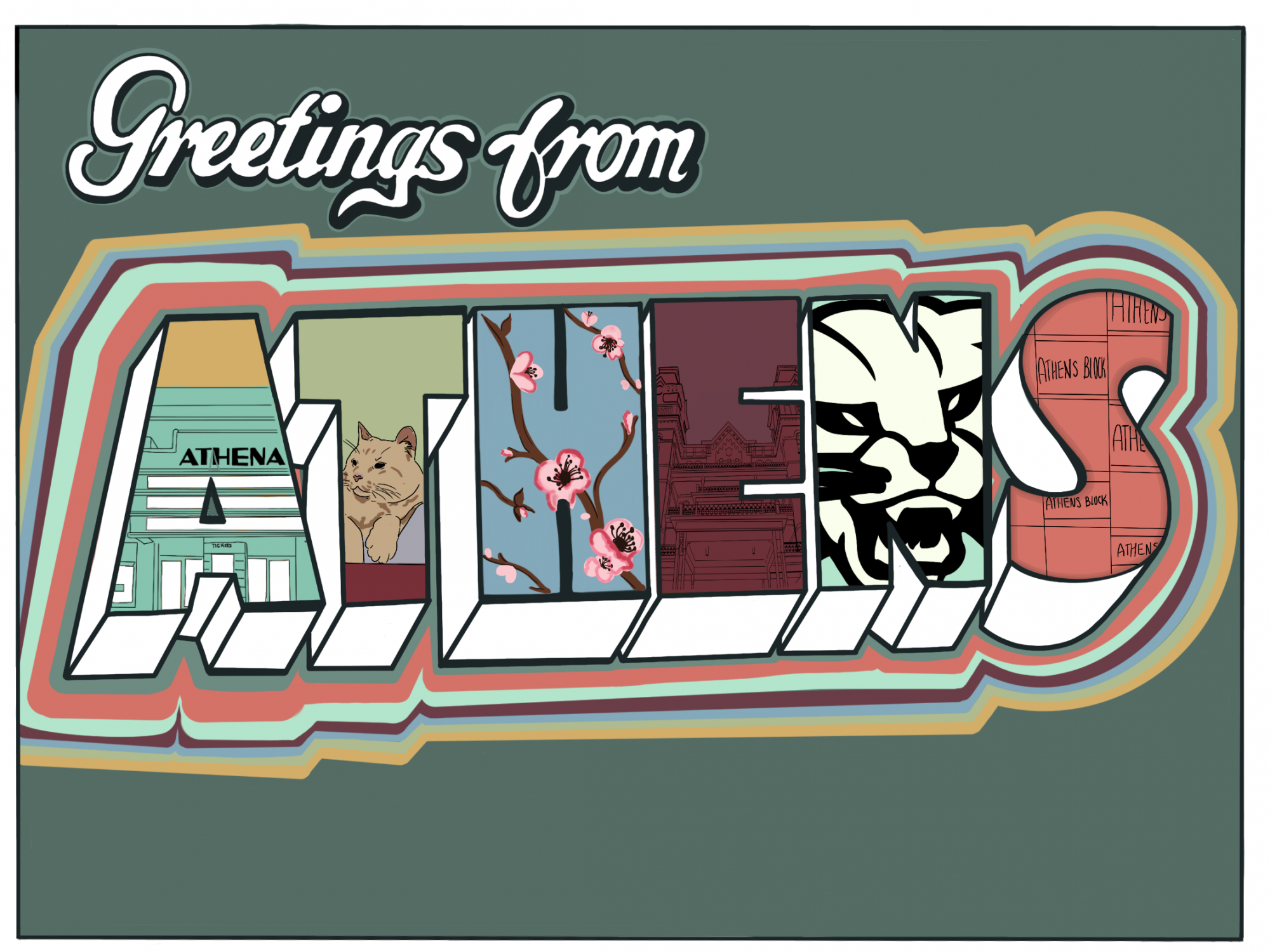 T he COVID-19 pandemic thrusted the world into a state of uncertainty. The safety of everyday routines — from ordering a pizza to going to class — is under scrutiny.

As people continue to adjust to safety protocols, mandates and ordinances, one thing that is certain is Fall Semester 2020 will be one like no other.

The Post previously reported Ohio University announced classes would begin online Aug. 24, and the majority of students will not be returning to campus in the fall until after Sept. 27.

For incoming freshman Arielle Lyons, the university’s decision was disappointing. She is, however, sympathetic.

“I’m disappointed since I was really looking forward to finally going to college, especially since I missed out on a lot of things I was looking forward to as a senior,” Lyons said in a message. "But I understand why they made the choice that they did and I’ll just have to be patient for another month.”

COVID has had a significant impact on Athens County and continues to, Jack Pepper, administrator at the Athens City-County Health Department, said.

Local public health officials have been preparing for a public emergency like this since the early 2000s. They continued preparing into this spring – when the theoretical emergency became reality.

“Since early March we have worked closely with our government, university, and business partners to apply those plans to the reality of the COVID-19 pandemic,” Pepper said in an email.

OU will have a phased return on the Athens campus this fall and a hybrid approach for regional campuses. The university previously canceled all Fall Semester and winter break study abroad programs, both international and domestic.

The university’s revised fall plans were made after consultation with public health and medical partners who supported the need to reduce the number of people on our campus, Leatherwood said in an email.

“In phase one, only a limited number of graduate and undergraduate students in a carefully selected set of academic programs (are) permitted to return to the Athens campus,” Leatherwood said in an email.

According to a previous Post report, students whose programs require in-person experiences for accreditation or those who need access to specific equipment, will be eligible to return to campus.

Students with extenuating circumstances, like international students or students experiencing homelessness, are able to apply for on-campus housing, too. The university will notify students who are eligible.

Those coming back to campus will have to comply with OU’s pandemic policies.

The university approved an interim face covering policy and teaching environments have been heavily modified. The university is also trying to ensure shared study spaces, such as Alden Library, are safe and accessible.

Consider this guide to assess your risk, and:
☑ Wear a mask
☑ Social distance
☑ Stick w/the same group of #COVIDBuddies pic.twitter.com/gMDG5AjoT0

OU has also outlined student behavior expectations: for instance, the OHIO Pledge. The university will require “every member of the university community” to sign the pledge, which affirms that “they will do their part to stop the spread of the deadly coronavirus.”

The pledge consists of six major points which signers must abide by, including: following OU’s facial coverings policy and all protocols the university adopts, monitoring university communication about COVID-19, agreeing to participate in contact tracing efforts and will not all their biases to “impede the access and opportunity of others in my community.”

OU’s Fall Semester goes fully remote in mid-November. The last day for on-campus activities will be Nov. 20, according to a previous Post report.

Plans were briefly in motion to go back to normal. On May 19, Gov. Mike DeWine lifted the mandatory stay-at-home order, which had been in place since March 25.

Prior to lifting the order, DeWine allowed restaurants and bars to serve patrons outdoors starting May 15, and inside service on May 21, according to the Newark Advocate.

Each year, once spring break starts, everything Uptown slows down, Patterson said, and that same slower-paced Athens feel continues into the summer.

Things seemed to be on the uptick after DeWine lifted the stay-at-home order, and establishments reopened, Patterson said.

But that only lasted a week or two. "Well, once that happened, there was a lot going on," Patterson said. "Not quite a lot of it was responsible. That is telling unto itself.”

“Part of the problem was or is that a lot of people felt that Athens County only has 33 cases out of 60,00 people. To them, it appears to be safer in Athens than elsewhere,” Patterson said. “Individuals or families make it a day trip to come from Cincinnati because they felt that the cases are low, so why don't (they) make a day of it and turn around and go back?"

But bar-goers and tourists aren’t all to blame. For Pepper, the spread of the virus depends on the actions of individuals.

All COVID cases are treated the same, Pepper said.

“Case investigation and contact-tracing does not change depending on age demographic. Typically, cases are tied to current place of residence. Positive cases currently residing in Athens will be counted in our case count,” Pepper said.

Ohio Brew Week, or OBW, is an Athens summer staple. For the past 14 years, breweries and patrons have taken to Court Street to sample local beers and share good times. This summer was supposed to be year 15 of OBW, but it, too, was canceled due to the coronavirus.

Executive director of OBW Brandon Thompson, aka DJ B-Funk, said the decision to call off Brew Week was a difficult one. It raised many questions and was ultimately made out of safety for the community.

The thought of students not returning is scary for Thompson, as they are contributors to the local economy. It is well-known that Athens County is one of the leading counties in the state for food insecurity and poverty.

“I’m honestly not sure how I even feel,” Thompson said. “I don't even know what’s real and what's possible anymore. This year won’t be a good year.”

This deadly aspect of the virus is a concern for Pete Hyde, a senior studying information telecommunications systems. According to the European University Institute, the average age of a full-tenured American college professor is 55.

“I'm worried more for the older professors than I am (for) people our age,” Hyde said in an email.

Hyde said he’s done all the big things there are to do as a Bobcat — minus Number Fests. As an OU alumnus, Thompson, too, recalled the fun of being an OU student: shows at the Union, hanging out at Donkey Coffee.

“I can’t imagine being at OU and not being able to go Uptown,” Thomspon said. “For some, (this year Athens) may just look like a very boring college town.”

Thompson also has concerns over how the pandemic will affect the entire Bobcat lifestyle, from dorm life to student orgs. For him, the college experience is a shared one.

“The OU experience is about being with other people. It's not about being by yourself,” Thompson said.

Because Hyde’s classes will be taught differently, he isn’t sure if this year's education will be as satisfying as previous ones.

“I am not sure that it is going to (be) as rewarding of an experience as the years prior,” he said in an email. “I guess I'm going to just have to go with the flow of the courses as everyone is adjusting.”

Hyde also has concerns about how social distancing and class precautions are going to affect the quality of OU’s education.

“I think all the social distancing in classrooms is really going to have a negative impact on the (hands-on) classes,” Hyde said in an email. “I really (don't) think anyone is going to have a learning experience that comes close to what the university has provided in the past.”

The problem of expectations — or a lack thereof

The ceremony was virtual. Pre-recorded clips of speeches and graduates receiving their diplomas were compiled and livestreamed.

“(The summer) has definitely not gone as planned,” Lyons said. “I still had a grad party, but I did it in waves. It was nice to still be able to celebrate my achievements.”

Lyons, who is studying journalism, thinks her freshman year experience will definitely be different than the average freshman’s. But she’s avoided giving herself too many expectations.