Ian Butcher simmers the steaks and chicken. Tara Slingerland hastily walks around the kitchen, moving from sauces to vegetables to dressings. Yellow squash, red onions and an assortment of peppers line the tray of vegetables waiting to be skewered. There isn’t a second of stillness in the room.

It is the usual Monday afternoon routine for these two business partners. Later, they’ll package those skewers and give them to people around Athens.

Their meal prepping business, Butcher’s Bites, named after Butcher, is in a “soft launch,” as it has only been advertised through social media in the last six months. The meal prepping service helps Athens residents plan out their meals and cook for them using healthy, local ingredients. The menus, which change weekly, include a range of dishes from an oatmeal breakfast to mediterranean chicken kabobs.

Co-owners Slingerland and Butcher, who are both chiropractors and wellness nutritionists, started the business after Slingerland saw a client who rarely went grocery shopping.

“She lived with five other girls. There was a fight for refrigerator space, and she didn’t know how to cook,” Slingerland said. “Every day, she got her food from Court Street, and every week, she got her staples from the Dollar General. She asked me if there was anything she could get from there or anything she could get from Court Street to kind of make her daily diet healthier.”

Slingerland and Butcher sat on their business plan for two to three years, but after seeing the need to help people, they decided to go forth with the plan.

Both Slingerland and Butcher are bodybuilders. They compete once every one to three years, and both look the part. Slingerland is tall with blonde hair and a lean build. Butcher is well above six feet tall, with a strong, muscular build. Standing next to each other, they look like superheroes.

Each day, Slingerland does some form of exercise, as it’s important to her lifestyle. She does restorative yoga, CrossFit, and strength and resistance training. Butcher exercises about six days a week for about 40 minutes. He said the gym is a social and competitive outlet for him.

They found the Appalachian Center for Economic Networks, 94 Columbus Road, which offers a kitchen space that Slingerland and Butcher rent out. The center, commonly known as ACEnet, a stainless steel, facility-like, shared kitchen space that allows cooks to come in and make their food without having to own the cooking equipment. Casa Nueva cooks were in the corner slicing piles of yellow corn from the cob while Butcher and Slingerland’s team worked in the middle. 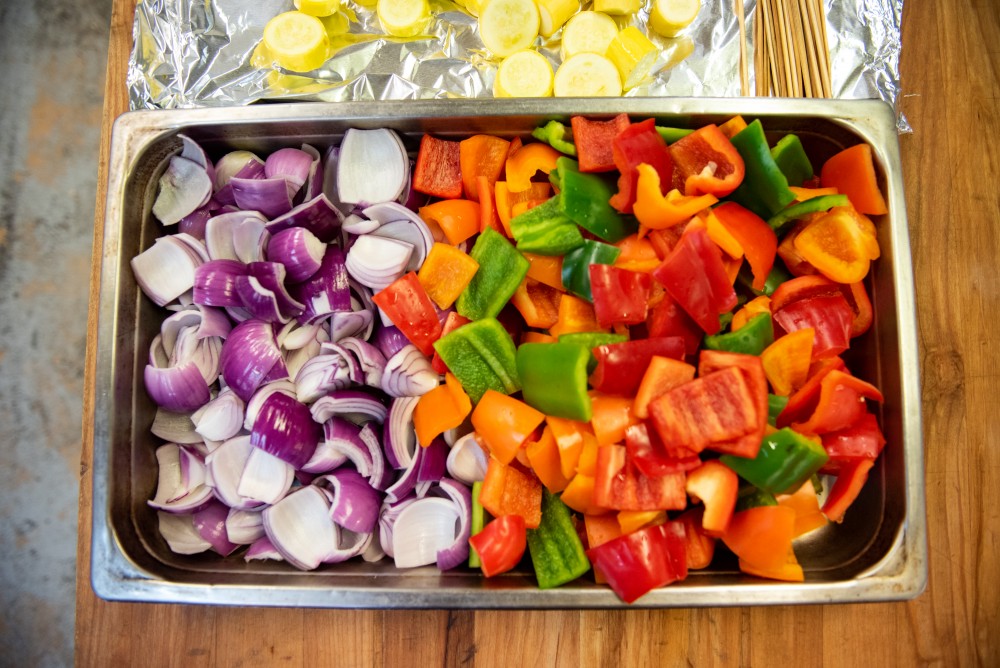 Ingredients for kabobs sit in a tray in the kitchen of Butcher’s Bites before they are skewered.

Once they decided to move forward with the business, they met up with a web team to design a website, the only start-up cost for the business. Butcher’s Bites also works with the Voinovich School at Ohio University as a resource, as they perform projections and start-up costs for the upcoming business.

Although it began with just Slingerland and Butcher, they added two students as unpaid interns to their team after six months along with the help of a friend who they met when Butcher and Slingerland attended OU.

As they prepare the meat and vegetables to grill, they all chatter about their lives. While cooking to some people is a chore, the Butcher’s Bites team uses the time to come together or relax.

Slingerland and Butcher wear Butcher’s Bites t-shirts. In fact, everyone on their team sports one while they cook. Slingerland wears leggings, and Butcher dons basketball shorts. Whether it is working out or cooking, they are ready.

“It’s nice to have 100 pounds of meat to grill and to put in headphones,” Butcher said.

Butcher said his goals are to show people how to eat healthy and to create a healthy lifestyle, yet he said he does struggle sometimes with creating a menu for mass amounts of food to be produced.

“Not all recipes convert well, too,” Butcher said. “Cooking for four people is a lot different than cooking for 100.”

Most of the meals so far have been produced by two to three people, and they have averaged about 275 meals made each week. The average person buys two or three meals per day from Butcher’s Bites, for about five to six days each week, Slingerland said. The smallest order she has seen is 10, the largest about 20 meals for one week.

“The community has been good to us,” Slingerland said.

A few thousand meals, however, Butcher said, would be doable in the future with more hands in the kitchen, whether it’s chopping onions, preparing oatmeal or washing blueberries.

“Healthy food doesn’t necessarily taste bad. We are trying to teach people that you can eat healthy,” Butcher said. “We remove all of the planning, which is the hard part. We provide the protein, the carb and the fats breakdown so a lot of people can track it through an application.” 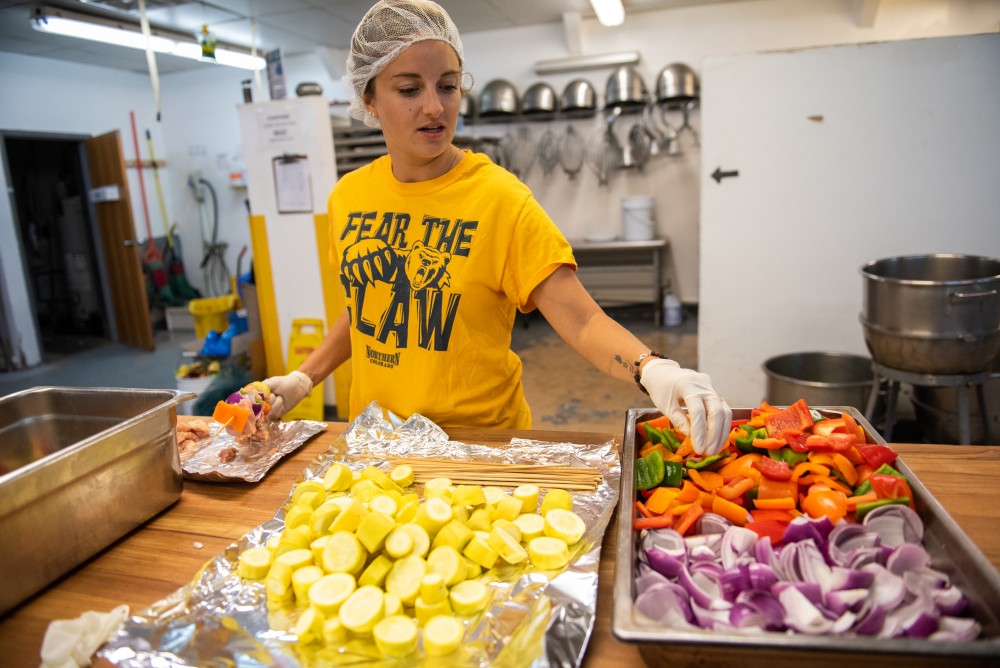 Cindy Demallie prepares kabobs for the day’s meals in the kitchen of Butcher’s Bites on September 18, 2018.

Slingerland said she hopes Butcher’s Bites and its website will be fully operational by Oct. 1 and plans to invest more once it does. She said her next step would be to buy the company its own kitchen space.

Georgia Alexander loves to cook and joined the team when Slingerland reached out to her about creating vegetarian dishes. At first, Alexander helped with cooking and vegetarian menu items, but she said she will soon work on recipe development for the company.

“Before she was getting the other interns, it was just her and Ian coming up every week, and sometimes having help and sometimes not,” Alexander said. “I started driving up on Mondays.”

On Monday, she and her team spend hours cooking. Tuesday is pick-up day, where Slingerland is back and forth between her office and meeting people who pick up their ordered meals. She hopes to later add delivery to free up her time.

“It’s the convenience of having the meal made for you, so you don’t have to go to the store. Everything is fresh. You’re not getting anything frozen. I think the major thing is the nutritional profile of it.”Tara Slingerland

“We’re typically here five to six hours,” Slingerland said. “We do all of our prep on one day. I want the food to be as fresh as possible when you cook it.”

Chicken, tofu and vegetarian meals are $8 per meal, while beef meals are $10. There are also breakfast meals, such as oatmeal with protein mix, which is $5. Slingerland said she has started looking into ketogenic, vegan and dessert options.

The majority of their client base right now is the CrossFit gym, CrossFit SEO, 762 W. Union St., in addition to their wellness and nutrition patients, Slingerland said.

“It’s the convenience of having the meal made for you, so you don’t have to go to the store,” Slingerland said. “Everything is fresh. You’re not getting anything frozen. I think the major thing is the nutritional profile of it.”

Cindy Demallie works at Butcher’s Bites for about 15 to 20 hours a week. She meal preps herself because it saves her a lot of time.

“I don’t always practice what I preach, but I’m starting to notice that I have some eating habits that I am telling people to not have,” Demallie, a graduate student studying food and nutrition science, said. “It’s definitely making me more aware of what I am eating.”

When MJ Daughtery, one of Butcher’s and Slingerland’s bodybuilding trainees, learned about the company starting, she asked to become an intern. She helps with meal prep and food calculations.

“It saves you cooking time during the week where you can just go and heat that food up, especially if you have a lot of work to do,” Daugherty, a senior studying exercise physiology, said.

Even though she is not a trained chef, Slingerland said, she still loves to cook and help people eat healthily.

“My No. 1 goal is to show people that there are a thousand different ways to cook chicken, rice and vegetables,” she said. “It doesn’t have to be plain and simple.”