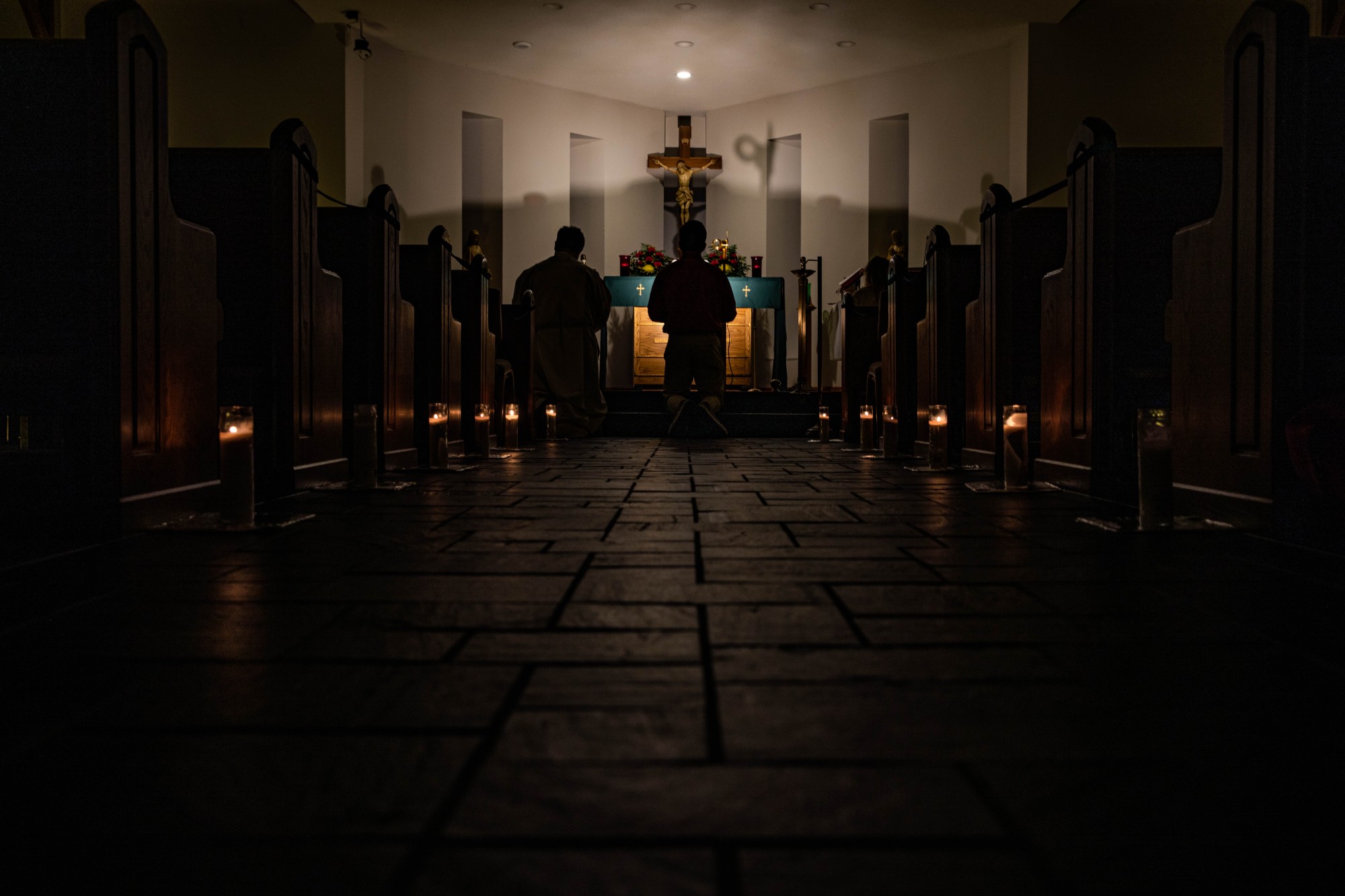 Students kneel before the cross, starting off the Eucharistic Adoration in Christ the King University Parish Catholic Church in Athens, Ohio, on Wednesday, Sept. 16, 2020

Praying through the Pandemic

T he students of Ohio University’s Hillel will be celebrating Rosh Hashanah, the Jewish new year, a little differently this weekend. 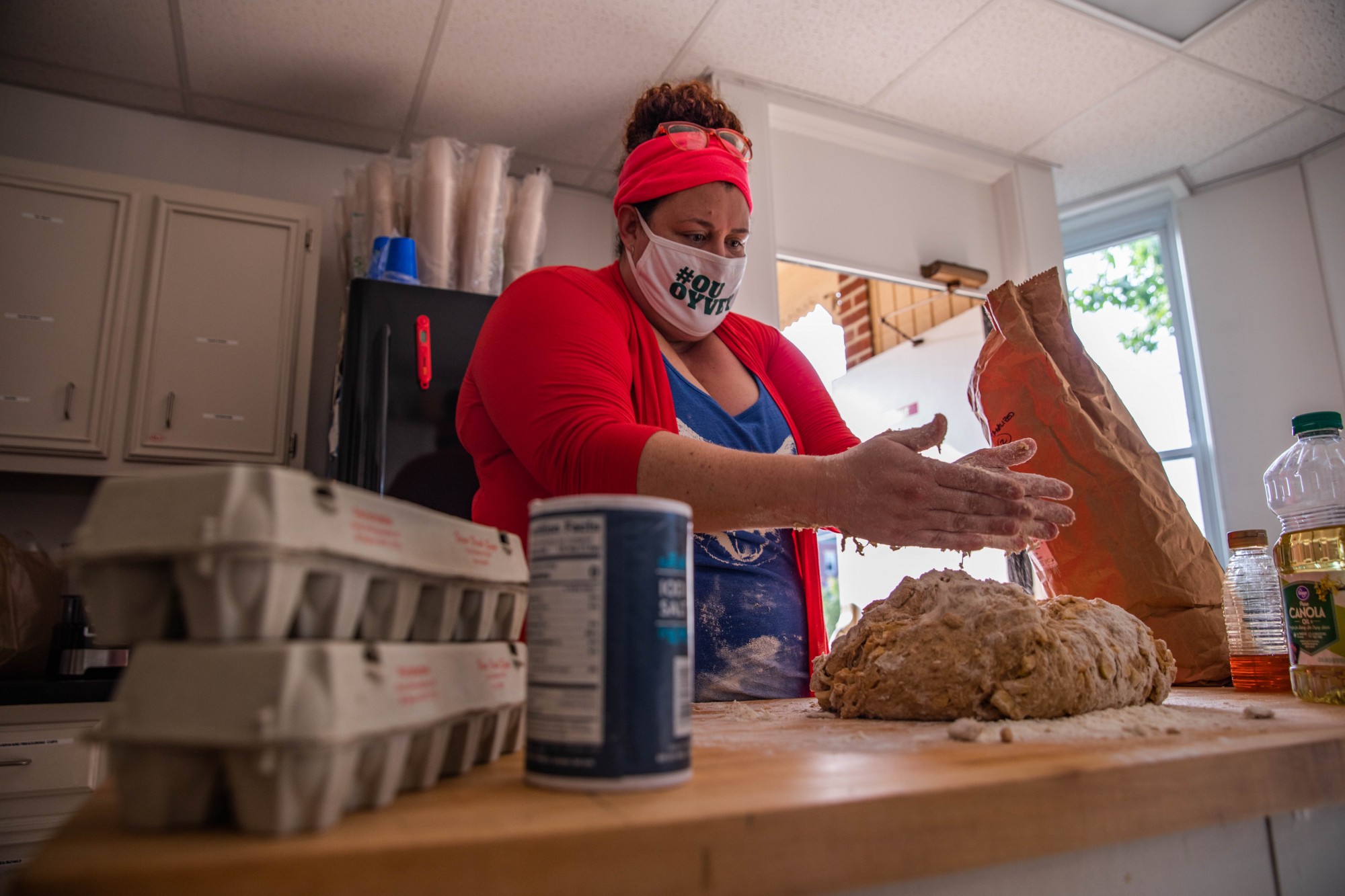 Executive Director of Hillel at Ohio University Sarah Livingston kneads challah, a bread made with apples, cinnamon and honey that is usually served for celebrating Shabbat and other major Jewish holidays. "It's my favorite thing to do for the students" Hillel says while preparing the dough for roughly 25-45 students in the kitchen of Hillel's synagogue in Athens, Ohio, on Wednesday, Sept. 16, 2020.

"It's my favorite thing to do for the students"—Sarah Livingston, Executive Director of Hillel at Ohio University 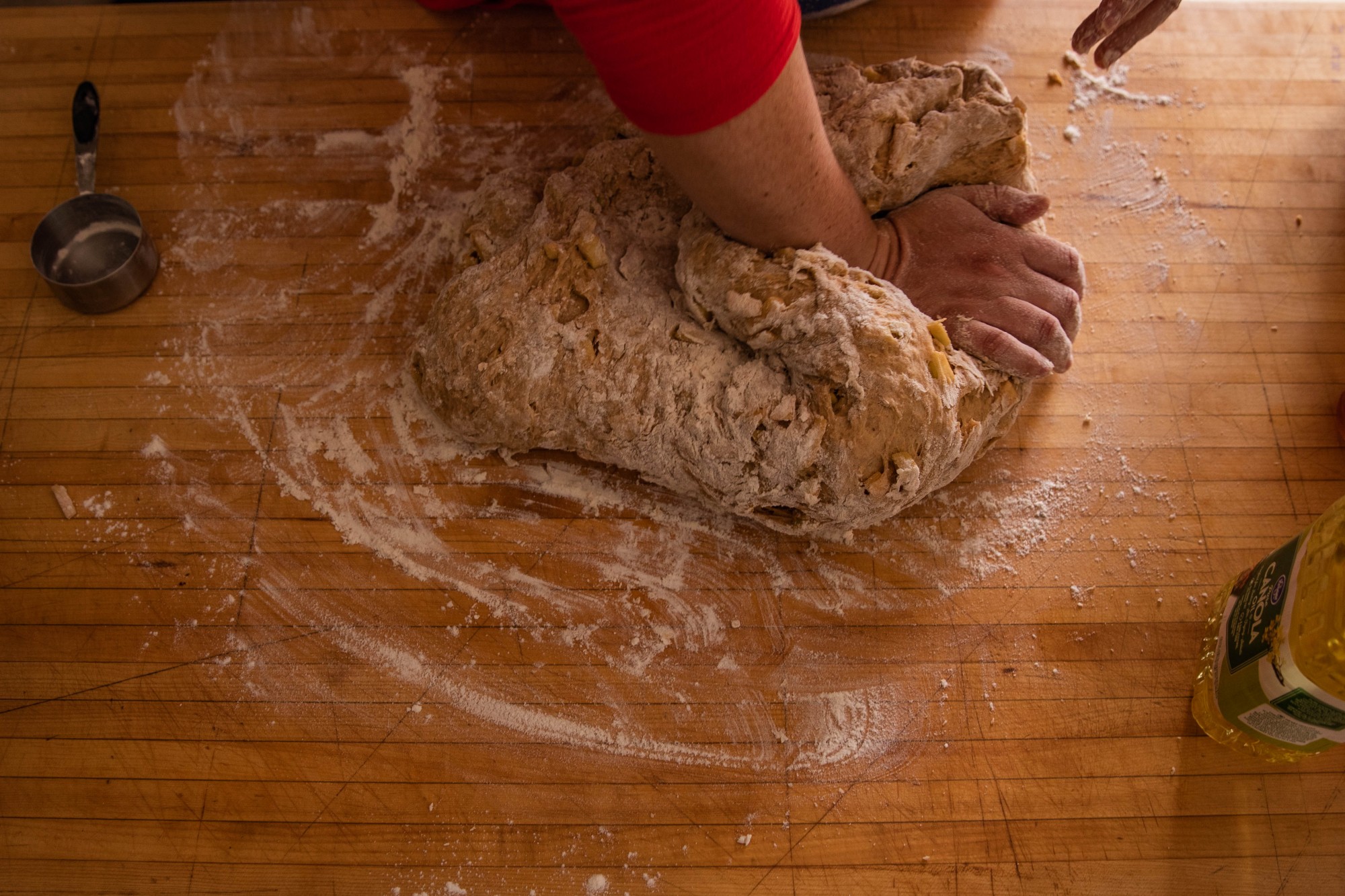 Executive Director of Hillel at Ohio University Sarah Livingston kneads challah in the kitchen of Hillel's synagogue in Athens, Ohio, on Wednesday, Sept. 16, 2020. Challah is a traditional Jewish bread made with apples, cinnamon and honey.

Instead of gathering together with family and friends, their Rosh Hashanah Shabbat, a weekly religious service and dinner that this week will be combined with the beginning of Rosh Hashanah, will be held virtually. Those interested in participating can get their Shabbat dinner, candles included, to go from OU’s Hillel, an international Jewish college campus organization, Director Sarah Livingston said.

“We're doing it digitally,” Livingston said of holding high holidays traditionally spent together online. “This is, like, painful. It's hard.”

Student groups and religious organizations around Ohio University's campus have been working to adapt their gatherings, services and social events to an online format amid the COVID-19 pandemic.

For those of all religions, the gathering of family and friends for religious holidays is a special experience aside from just its religious importance. The community that surrounds the traditions, the food and the love between the communities is not quite the same when experienced through a Zoom call.

Ohio University has 30 registered student religious organizations listed on Bobcat Connect, along with the University Interfaith Association, which provides counsel to the Dean of Students on matters concerning the spiritual needs of students. Each organization has adapted different customs digitally or in a socially distant fashion to keep a sense of normalcy during an age of separation.

Along with Hillel’s Friday night Shabbat for Rosh Hashanah, the organization will offer online services Saturday morning and a small, private service for the Jewish community in Athens to hear the Shofar, the blowing of a ram’s horn done each Rosh Hashanah.

Additionally, there will be a socially distanced event Sunday at 11 a.m. with the blowing of the Shofar at the Richland Avenue playground for the whole community. Families and roommates can attend in their “pods,” and social distancing and masks will be required.

For Livingston, her priority during the pandemic has been keeping Jewish traditions going, like the weekly Friday night Shabbat, and keeping in touch with students while many are far away from their communities.

“I think my attitude towards all of this has been to do whatever it takes to bring Judaism and all the Jewish traditions and rituals to the students that need it in whatever way we can,” Livingston said. “And … to make sure that the students feel like they're getting what they need from us, and that they're feeling all of their feelings are valid.”

Familiar traditions, along with fun, social events have become even more important in keeping the Hillel community connected as the school year starts and students mourn their in-person semester and deal with online learning.

Other organizations, like Reach Out on Campus, a nondenominational Christian group, have also been adjusting their usual offerings to the online sphere. 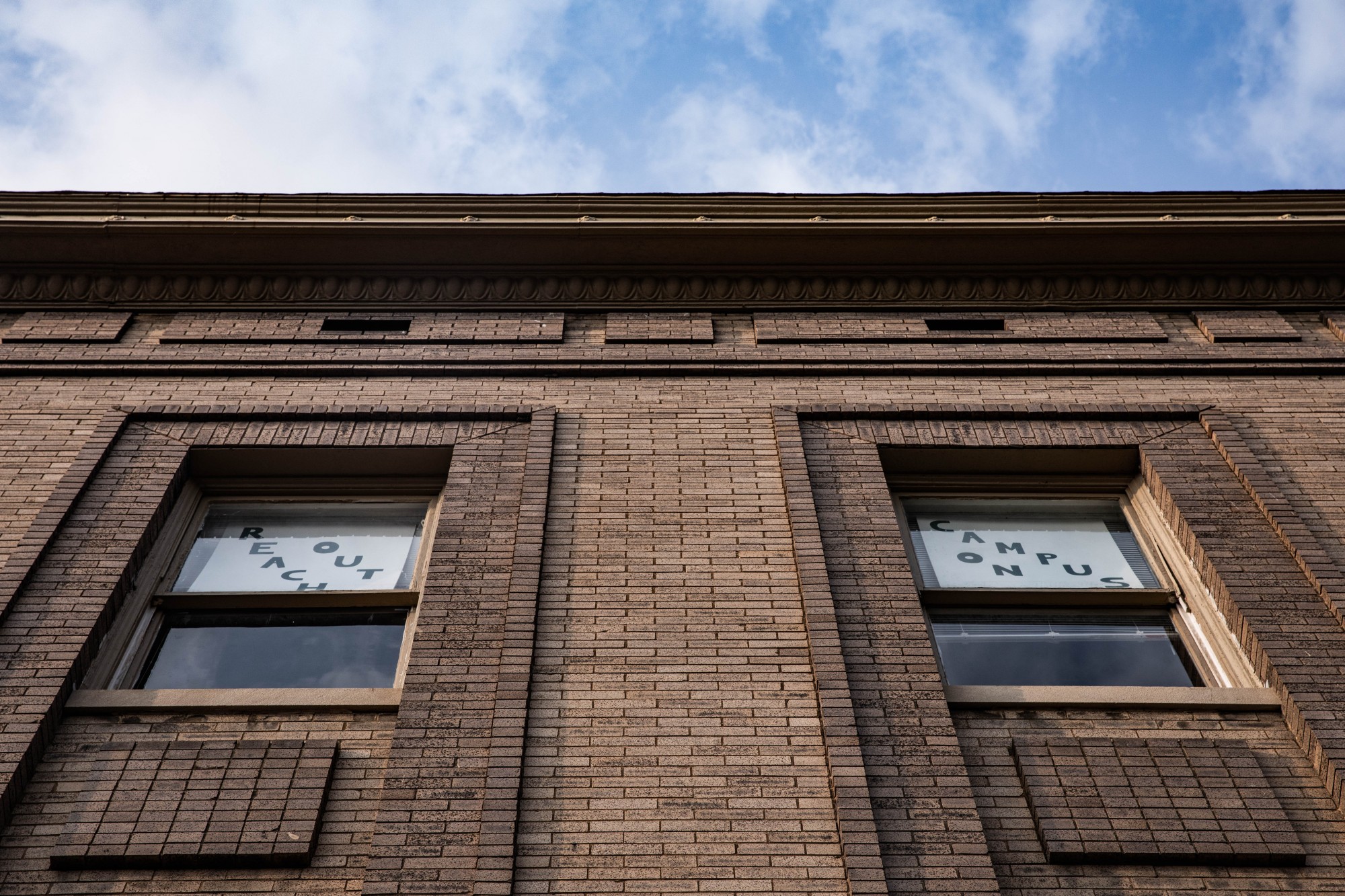 James Wallace, the president of ROC and a senior studying pre-med chemistry, says the group usually meets in person for Wednesday night Crosswalk, a gathering including a lesson, games and worship songs. The group began meeting over Zoom, like many other organizations at OU.

“We adapted … so everybody could still be part of the Zoom call,” Wallace says. “We still try to keep it around the same basis and that sort of same format as if we were in person, but it's just one of those things, like, not everybody wants to stand in front of a computer, so we shorten it down.”

Additionally, the group has been holding online bible studies, many of which have focused on lessons that bring comfort during the time of COVID-19.

“We've been doing a lot of studies and a lot of lessons based off of submission, control, stuff like that, because a lot of people are scared right now not knowing what's going to happen,” Wallace says. “It’s just (about) letting the Lord take over your life.”

For Wallace, he is looking forward to getting back into the office space the group meets in that has been affectionately dubbed “the ROC house” and being with the group in person again.

“We're not just a group,” Wallace said. “We're not just a bunch of Christians meeting up. We’re family. We're up there to serve a better purpose. Being able to, once again, just come together as a group and get that family feeling again, it's going to be amazing.”

The group has tried to stay in touch online for the time being and has taken its members’ prayer requests as well.

Many people, college students and otherwise, turn to religion during times of crisis because of the unique power of prayer and communication.

Loren Lybarger, associate professor in the department of classics and religious studies, said religion is unique in how it arises during crises and offers something that other social and cultural entities do not: it allows communication.

“The thing that distinguishes religion from anything else is that it makes available, (and) it provides religious communities access to these spiritual interventive tools, these techniques through which crisis is addressed spiritually,” Lybarger says.

A modern example of religion being present during moments of crisis is in hospitals, Lybarger says. Although medical science is usually the first thing people go to for health concerns, there are often religious entities within those institutions.

“We create cultural practices and institutions in order to enable our lives and our very survival, and religious practices are among the earliest kinds of practices that human beings develop,” Lybarger says.

While many groups and organizations have fully adapted their services to an online format, some organizations, however, are still able to attend in-person religious services, like Ohio University Catholics.

That doesn’t mean things are entirely back to normal, though.

The group meets for Eucharistic Adoration at 8 p.m. on Wednesday nights, then attends mass together at 9 p.m. Soon, the group will be starting back remote Bible studies, so those outside of Athens can participate, too. 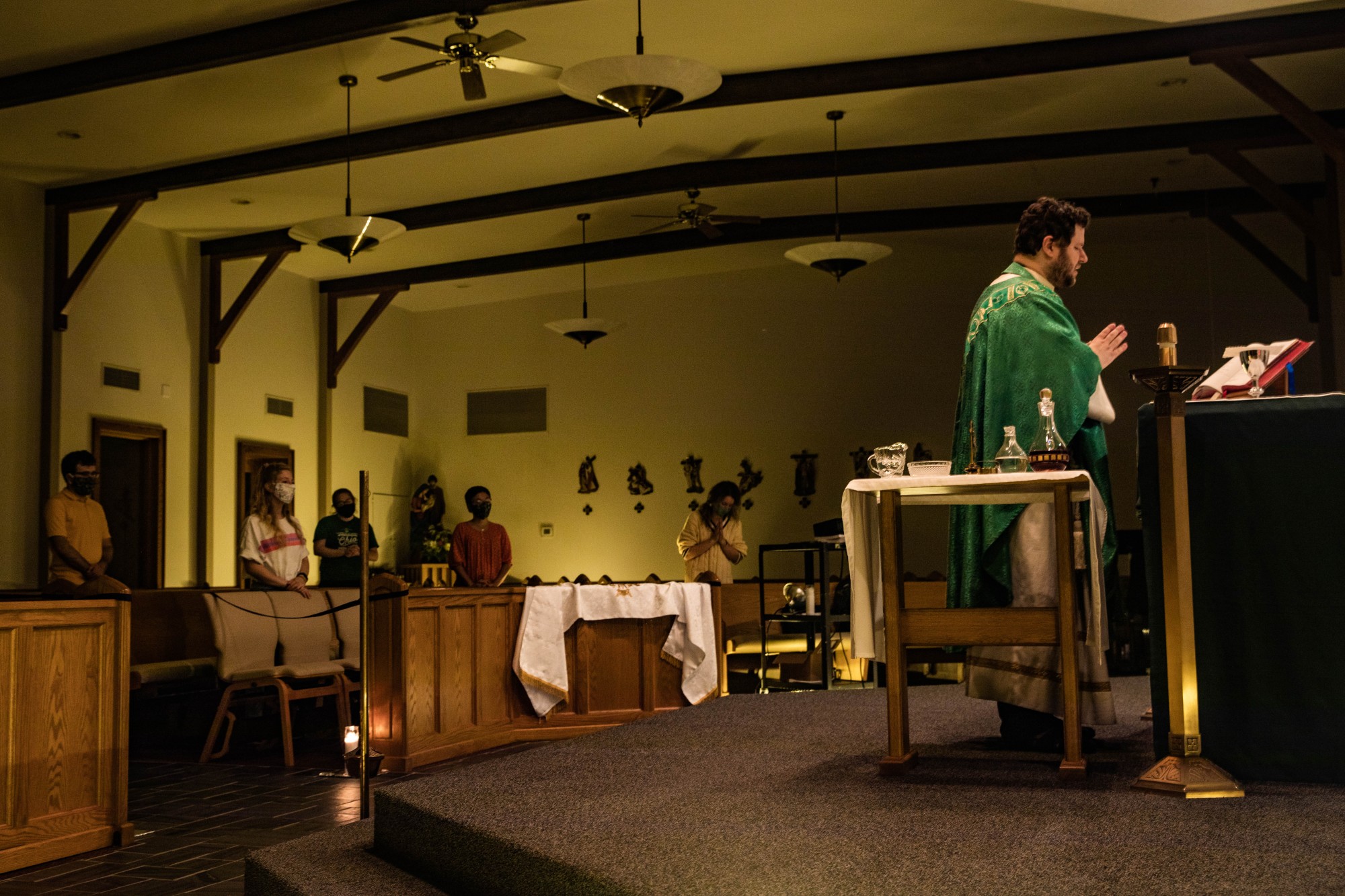 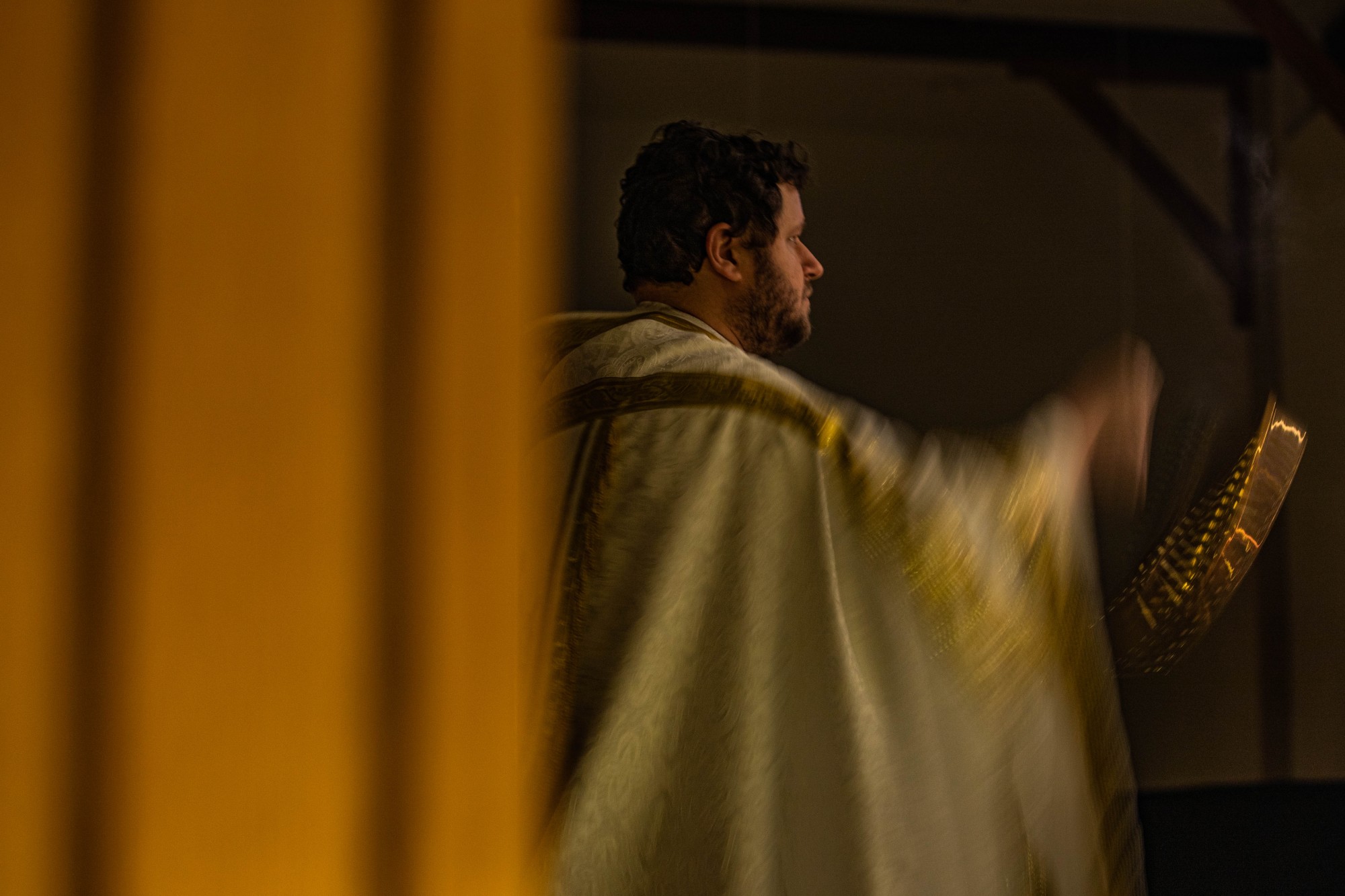 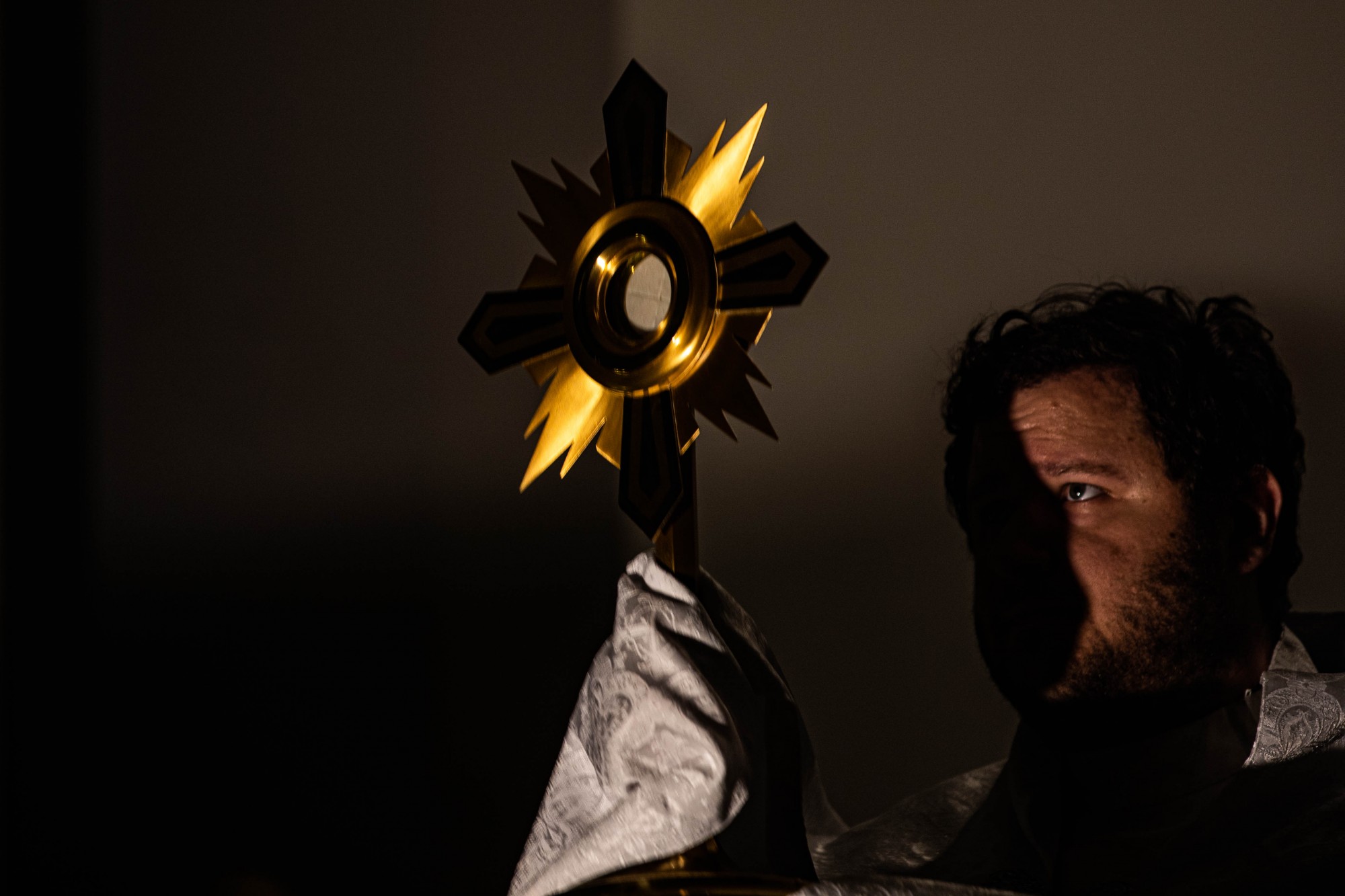 For OU Catholics senior ministry team member Michael Massinople, a senior studying marketing, his faith has given him a way of knowing things are going to be all right.

“I think when you hope it's something greater than the world, that you know what you're hoping in and it doesn't matter what happens in the world, as I have my hope in Jesus,” Massinople says. 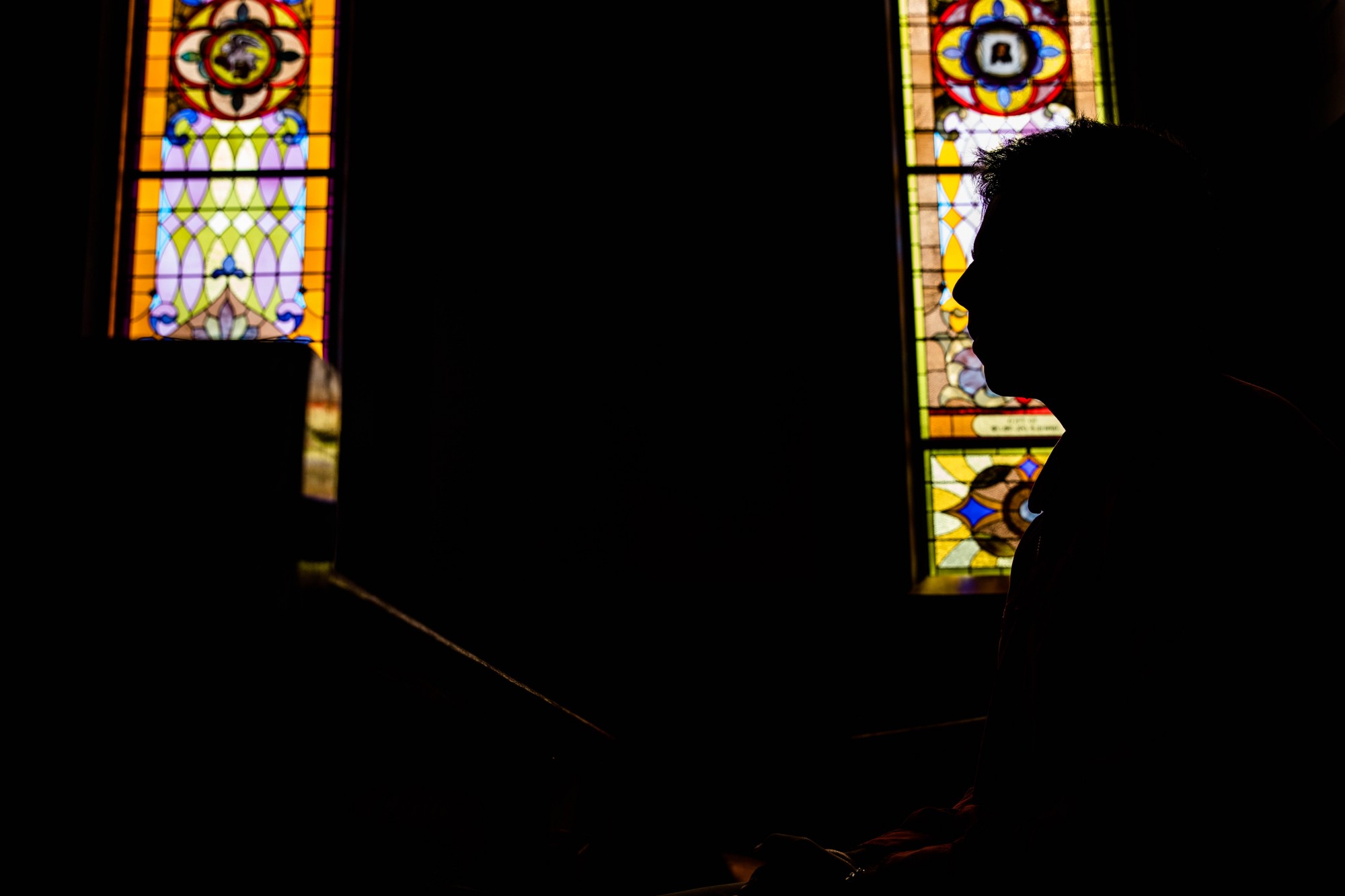 Michael Massinople, a Catholic student at Ohio University, sits at a pew inside St. Paul Catholic Church in Athens, Ohio, on Wednesday, Sept. 16, 2020.

Not all groups and organizations have been able to adapt events online, however.

The Muslim Student Association, which usually offers many events to the community, like the yearly MSA Culture Night held in Baker Center, has been unable to adapt many of those online. Additionally, five daily prayers are not something that can be done through Zoom but can be done individually from home.

Majed Zailaee, the former vice president of the Muslim Student Association and a Ph.D. candidate studying mathematics, says he usually went to pray at the mosque twice a day, and although he is still able to complete his prayers from home, that is not all he is missing. 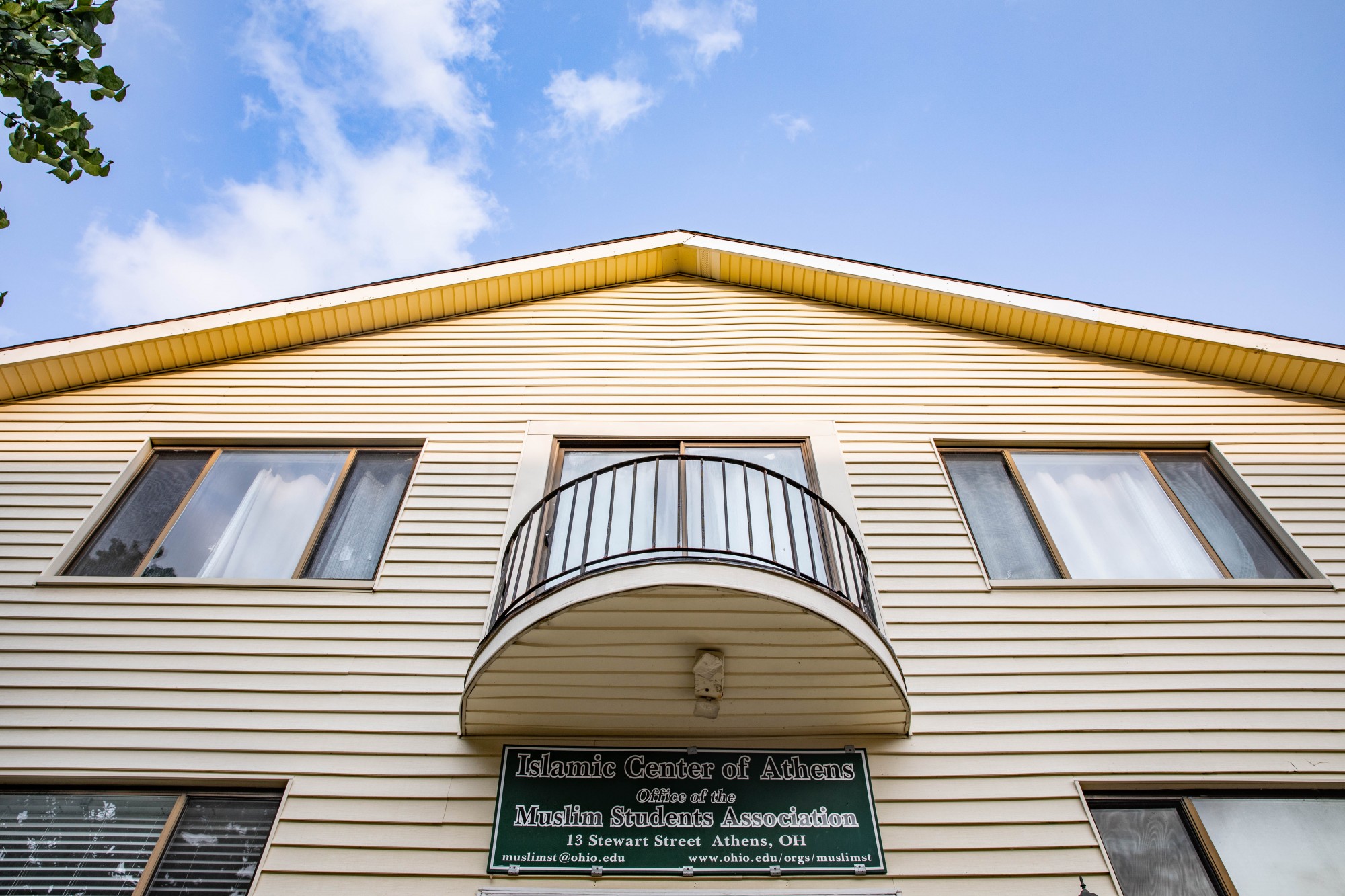 “Because we pray five times a day, I (went) to the mosque at least twice a day to pray,” Zailaee says. “So having the Islamic centers closed in COVID-19, it was really, really tough for me to adapt. ... It's not only about the prayer. You go and pray, and then you see friends and you have a small conversation with them.”

For Zailaee, the Muslim community he found in Athens has become more like a family while being away from his own. The daily visits to the mosque are not only about prayers, but people. For the meantime, and with added precautions, Friday prayers can be registered for online, Zailaee said.

He is also very thankful to the Athens community for being so welcoming of him, and he said that since his arrival to OU in 2014, he has never felt discriminated against because of his faith.

“I am personally so glad that I made a choice to come to Ohio University because of the wonderful people we have around,” Zailaee says. “They care so much about other people.”

*CORRECTION: A previous version of this article contained the incorrect spelling of "Eucharistic." The article has been updated to reflect the most accurate information.